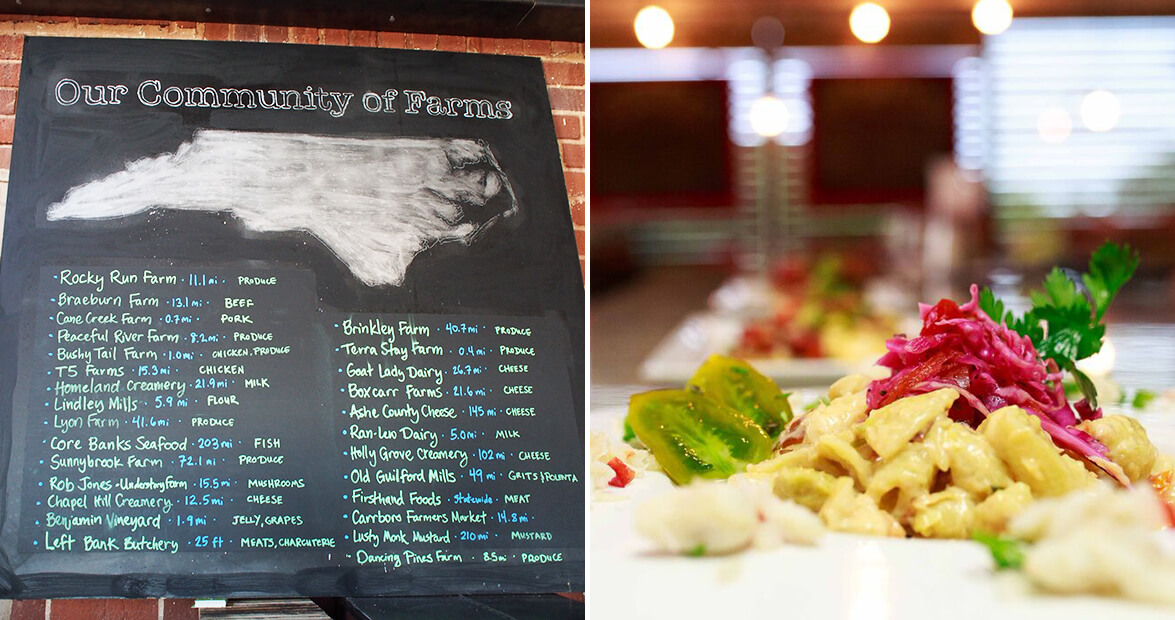 Tessa Farm to Fork is a welcomed addition to the dining scene in ever-growing Greensboro. You won’t find it downtown, but if you drive due northwest toward Summerfield, you can’t miss it – the rustic exterior and homegrown produce and herbs out front are a sure sign. Walk inside, and you’re likely to see items on the special board such as fried heirloom tomatoes and fresh-caught seafood. 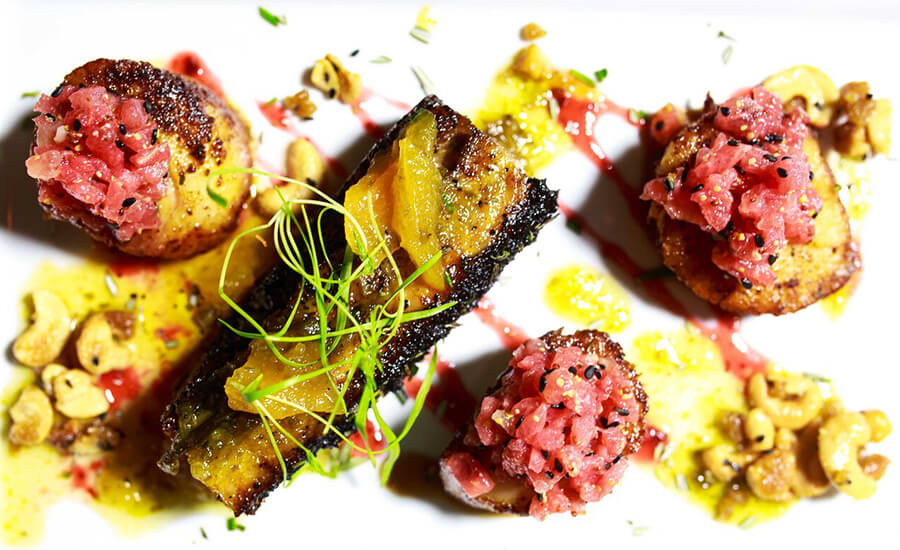 Tessa’s menu revolves around what local farmers have in season, and its specials change every day. In the spring, Executive Chef Caleb Smallwood did a “seed-share” with Smith Farms in Stoneville, where he chose seeds from a catalog for the farm to grow especially for Tessa. He also works with about a dozen niche farms that specialize in certain products, from salad greens to honey, and they source most of their protein from Hickory Nut Gap Farm in Fairview.

Smallwood describes Tessa as “community-to-table” because they work with local farmers and nearby small businesses. “We try to do what we can to support people who are doing their part in the community as well,” he says.

Claire Haslam grew up in Saxapahaw, and had a vision to bring a community-centered, local-focused space to the small town. Eventually, The Eddy Pub was born, inspired by the sense of community surrounding European pub culture that Haslam and Doug Williams (husband and co-owner) witnessed when traveling abroad. “We believe that good food shared around a common table makes us happier people,” Haslam says.

When it comes to the menu, The Eddy tries to keep it as local as possible, usually within a 60-mile radius. A lot of the produce comes from Chef Isaiah Allen’s own farm, Rocky Run Farm, which he operates with his wife Whitney. The Eddy works with other farms in the area such as Braeburn Farm in Snow Camp, Peaceful River Farm in Chapel Hill, and Cane Creek Farm in Graham. 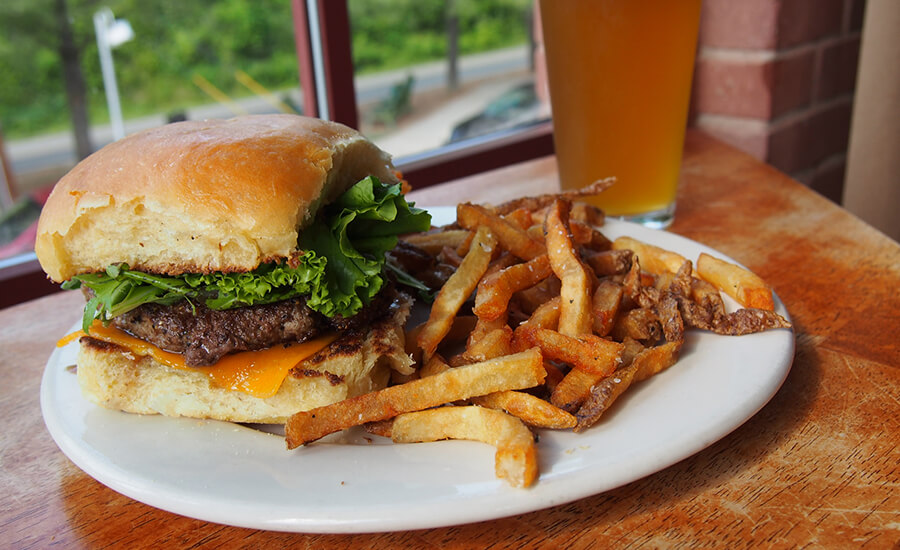 Photograph courtesy of The Eddy Pub.

“We’re really trying to walk the talk of being farm-to-table,” Neubauer explains. “We have lots of farmers who come and drop off their produce and end up staying for a meal, and it’s nice to be able to say to customers, ‘Hey, you see that person over there? They grew that salad you’re eating.’ It helps bring that story together.”

Cassie Parsons, chef and owner of Harvest Moon Grille, understands the hard work that comes along with being a successful farmer; she is one herself. This gives her a unique perspective on the concept of farm-to-table, which she takes personally. She makes a point to work mostly with farms in Lincoln County to provide opportunities for them, and to supply her restaurant with only the freshest products.

Parsons receives deliveries from different farms daily, so the menu changes just as often. “We’re always trying to update the menu to keep it as authentic as possible for our guests,” Parsons says. This summer, Parsons is most looking forward to working with butter beans, which are her favorite. She is also working with a farmer who is growing pineapple tomatillos for her, which will bring a unique flavor to upcoming dishes. 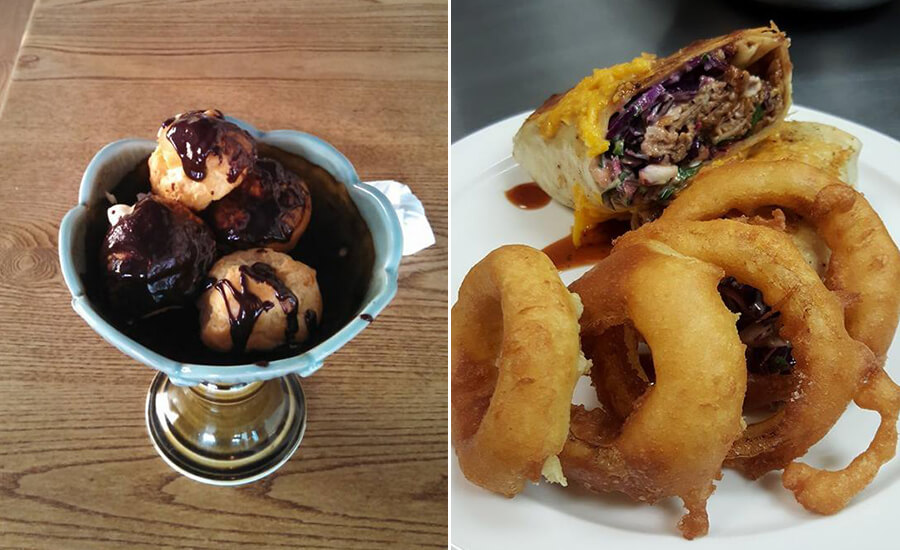 Parsons is proud of the positive impact Harvest Moon Grille has had on the community surrounding it. “When it comes to the community,” she says, “we like to think about how we can find food that’s closer to us, fresher, and how we can keep supporting small farms that are sending their kids to school… And I feel good about that.”

Cassie Parsons is opening a new restaurant in Belmont with Pat Brenner of Rivermen Brewing Co. in August 2016 – make sure to stay tuned for updates.

Halcyon, Flavors from the Earth • Charlotte

Jim Stauffer, who has been Executive Chef at Halcyon in Charlotte for almost three years, takes a unique approach to farm-to-table. While most of his produce and protein is sourced from local farms around the area, he doesn’t limit himself to just one region. With a background in Italian and French cuisine, Stauffer likes being able to incorporate globally sourced products (such as cheese from France) with local products so that people can experience the comparison. 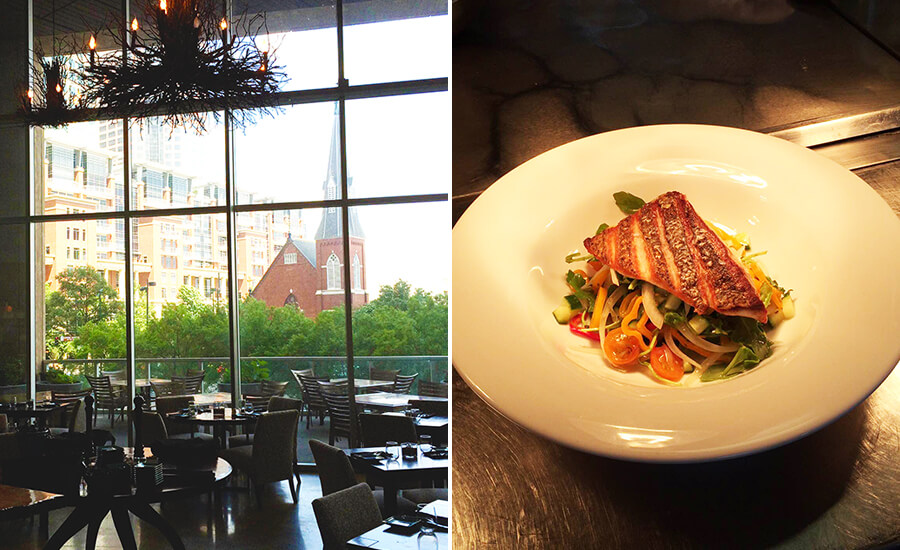 Photographs courtesy of Halcyon, Flavors from the Earth.

Stauffer makes changes to the menu almost daily, but as for a complete menu change, that happens about every six months to cater to either cool or warm weather. Halcyon has an in-house French baker that introduced such a great baguette recipe that it changed the whole face of their lunch business. “It’s impressive to see something so small make such a difference in your whole menu,” Stauffer says.

When working with farmers, Stauffer tells them to bring him whatever they have and he will work with it, rather than requesting specific items. It makes things easier for the farmers and allows Stauffer to make use of whatever is in season. “We’re not pushing any new cooking techniques here,” Stauffer says. “It’s just good, solid food that’s made fresh daily.”

When Leslie Philip opened the Thyme & Place Café in Southern Pines, she wanted to create a community between farmers, the restaurant, and its customers. “To me, that completes the farm-to-table cycle,” Philip explains. That culinary community also includes other chefs and entrepreneurs that rent Thyme & Place Café’s kitchen to make their own products. “I know what my struggles were [when] trying to expand, so if I can help people grow in their profession, then that is my offering to the community,” Philip says. 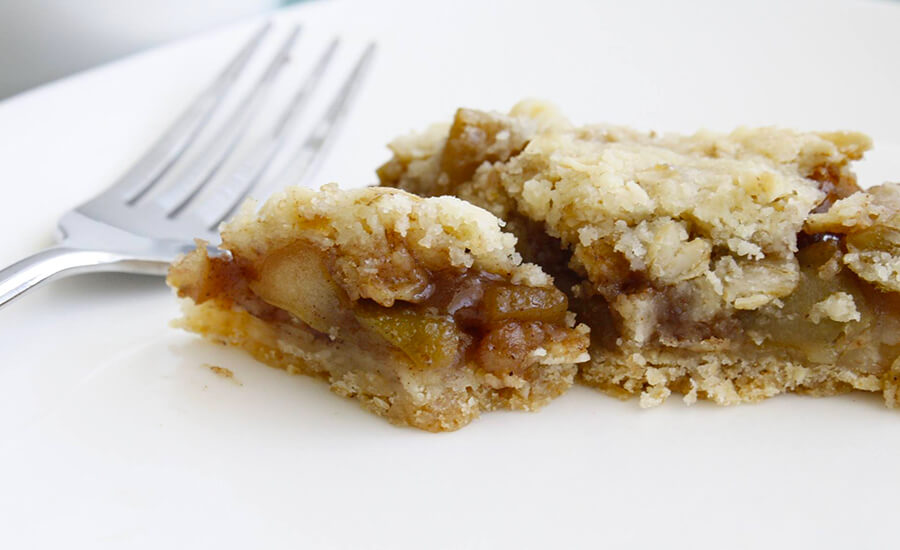 When Philip first started this endeavor, she wasn’t an expert baker. “I couldn’t bake my way out of a brownie box,” Philip jokes. But she soon taught herself how to bake in her own kitchen, and when she outgrew that space, that’s when she came across the property for her café. She hosts some of the best bakers in the area, and works with the Sandhills Farm to Table Cooperative to regularly keep up with local farmers and what they have available.

Thyme & Place Café is open for brunch and lunch, and has a vast selection of delicious treats in its bakery case. Philip is currently working on a new biscuit and sticky-bun venture, which she will be selling at her local farmers market.

Fork! • Cornelius
Even before the food arrives at your table, there’s something inherently alluring about Fork!, and chef and owner Tim Groody says there’s a reason for that. Read more.

Stanbury • Raleigh
Modern light fixtures envelop the room with soft, warm light, and the eclectic décor hanging from the walls makes the place reminiscent of a speakeasy. The majority of the food is grown and raised in North Carolina. Read more.

Heritage Food & Drink • Waxhaw
Once overshadowed by the Charlotte food scene, Waxhaw has come into its own as a culinary destination with the help of Heritage. Read more.

Kindred • Davidson
When Joe and Katy Kindred decided to open a restaurant, they simply looked to their last name for inspiration with the hope that those who dine with them will feel like family. Read more.

The Table • Asheboro
With its fresh eggs and bread baked in-house, The Table brings farm-to-table full circle with its breakfast, lunch, and pastry offerings. Read more.

Oakleaf • Pittsboro
Oakleaf’s location in rural Chatham County puts it close to its farmers, and the quality of the ingredients is seen as the starting point, not the end point, for menu inspiration. Read more.

Heirloom • Charlotte
Absolutely everything on Heirloom’s menu comes from within North Carolina. That is what’s key to owner and chef Clark Barlowe, whose family has lived in the state for seven generations. Read more.

Print Works Bistro • Greensboro
To Executive Chef Leigh Hesling, local food just flat out tastes better, so he makes an effort to be intentional about the ingredients he uses. Read more.