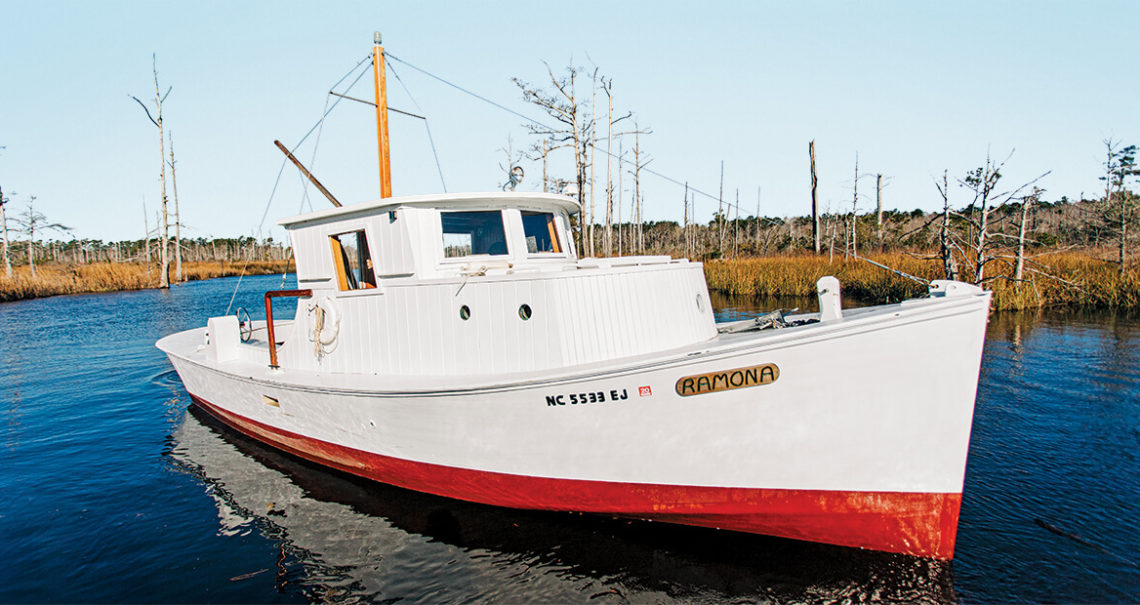 Needle-eye, Smokehouse, Drum Slough. Dean Dosher knows his way around all of the unofficial knobs and marshes of the Lockwood Folly River. “I can come down here at black dark. I don’t need a flashlight,” he says, seated on a cypress bench in the wooden fishing boat that he built from memory.

A whole boat. Let that sink in.

Dean knows this river like other people know their hometown streets. He knows what’s around this watery bend and the three after that. He grew up in Varnamtown, in a house situated one mile from the river by road. Days were spent with his brother, Don, known as “Grunts,” clamming and oystering along the banks, or building boats that they could take out fishing. “You either had to buy one off of somebody or build one yourself,” Dean says. So by the time they were 5 and 7, the Dosher brothers were building little boats of their own, using nails they took from neighbors’ fence posts. “It was just part of the lifestyle,” Dean says.

That’s no longer the case. Fishing culture has changed. Approximately three-fourths of the Lockwood Folly’s shellfish acreage is now closed due to runoff and pollution. And wooden boats like the Doshers’ are hardly commonplace. But that’s not to say that their work is stuck in the past. With Ramona, the boat Dean completed in 2018, their eyes are clearly set on what’s ahead.

The project started with a plummet. Fifteen years ago, Dean fell off his son’s roof and fractured his heels in 52 places. “The accident took about three seconds, then everything changed,” he says. Confined to a wheelchair for 18 weeks, Dean was forced to retire on disability from his trade as a house finisher, primarily building cabinets and staircases. Soon after, he was diagnosed with high blood pressure, a thing likely linked to sitting around for the first time in his life and the stress of not knowing what he’d do next. Then, as he puts it, “This boat came to my mind” and provided an anchor. “It really helped me get back to doing something, and doing it for myself,” he says.

“This boat came to my mind” and provided an anchor.

Dean thought a wooden boat, created in the tradition of those that commonly trawled the waters around Brunswick County between the 1920s and 1950s, would help draw attention to the local ecology. “I said, ‘Well, I’ll build a boat and I’ll run tours up the river to make people aware,’” he recalls, “especially those who haven’t seen it, and maybe spur some interest in taking care of the river.”

The vessel he envisioned was a “sound boat” with a rounded stern, a style that he calls “a fisherman’s mule.” They are efficient work boats, whose curved sterns prevent nets from getting snagged when they’re pulled out of the ocean and provide less resistance to wind and waves compared with the flat-backs of other vessels. But as Lawrence S. Earley, the great documentarian of North Carolina’s work boats, has observed, “Every boat carries a penumbra of meaning beyond its physical structure.” For Dean, that emotional freight was the bountiful Lockwood Folly of his youth.

The landscape provided as much as it inspired: Dean milled Brunswick County cypress for the hull, then began assembling it under an open-air shed in his backyard, working about three hours a day, which is all that his chronic pain would allow. “There’s as much of this county in this boat as I could get in it,” he says. That includes local knowledge, which runs deep in an area that boasted around seven boatbuilding yards when the Dosher brothers were children. Dean relied on his memories of the boats he saw to create Ramona by sight and feel. “There was no plan,” he says. “The boat told me what to do.”

For moments when he needed specific expertise, he had his brother. “I wouldn’t even have attempted it if he hadn’t been around,” Dean says. “He’s an encyclopedia when it comes to wooden boats.” Don, a renowned builder, has constructed more than 100 vessels by hand and repaired hundreds more, giving him extensive knowledge of why traditional boats need repairing and how to prevent certain issues. That intel, Dean says, guided many of his design decisions. “I tried to not only duplicate what was there when I was a child — the shape,” he says, “but I also tried to make it better and more functional.” That included adding modern conveniences, like GPS and updated wiring.

“There was no plan. The boat told me what to do.”

Mostly though, Ramona incorporates older methods of building and vintage materials. When folks asked him why in the world he was using old parts in a new boat, Dean was quick with a quip: “They’ve got experience,” he explained. “They know what they’re doing. They’ve already been tried.”

He searched eBay for years to find portholes from boats used in both World Wars, funded in part by friends (and strangers), who followed the boat’s progress on Facebook. Dean also salvaged equipment from local vessels that were no longer in operation. Of particular use was Solomon T, a former shrimp boat from the era on which Ramona was being modeled.

Capt. Bert Felton, who salvaged Solomon T from Wanchese and operated boat tours out of Southport, passed away while Dean was working on Ramona. Several weeks later, Felton’s widow, Becky, reached out to see if Dean could use hardware from his boat. He could, he told her. He’d be honored. Now, Solomon T‘s steering wheel, which navigated waters around North Carolina for at least 75 years, fits nicely in Dean’s grip as he guides Ramona home.

Dean launched Ramona, which he named after his wife of more than 50 years, on July 28, 2018. Local news outlets and friends wanted to attend, but Dean tried his best to keep most folks at a distance. “You can’t talk,” he says. “You’ve got a boat that could sink, you know?” But Ramona, with her gleaming white boards and copper-colored hull, floated triumphantly.

Since the launch, Dean has taken several groups out, including Becky and other members of the Felton family. “We’ve become very good friends,” he says. “This boat — I’ve met people I never would have met.”

As he hoped, he’s also introduced people to the Lockwood Folly River. Recently, he piloted the waters with a 94-year-old woman who has spent her entire life in Brunswick County but had never been on the river. He says she stood on her tip-toes for most of the trip, thrilled to see what was around each bend. “One of the things I love most is that, when you go from salt to brackish to fresh [waters], the vegetation changes on the shore,” he says. “It’s amazing when you see it.”

But Dean hasn’t quite figured out how to do professional tours just yet. To offer paid trips would require him to get a captain’s license, which, now that he’s in his early 70s, is a process he’s not sure he wants to take on. At the moment, a friend who is a licensed captain accompanies him on informal voyages up and down the river.

Through Ramona, however, he’s found a voice — one with a thick eastern North Carolina drawl. In 2019, the Southport Wooden Boat Festival chose Ramona to represent its 10th anniversary, printing her likeness on posters, shirts, and hats. Dean was there as well, to talk with other builders and enthusiasts about his craft and the water. “To me, it was like coming home,” he says.

Dean anticipates that Ramona will live on for another 60 to 70 years. “I’ll be way gone,” he says. But his hope is that his work will help the river carry on.