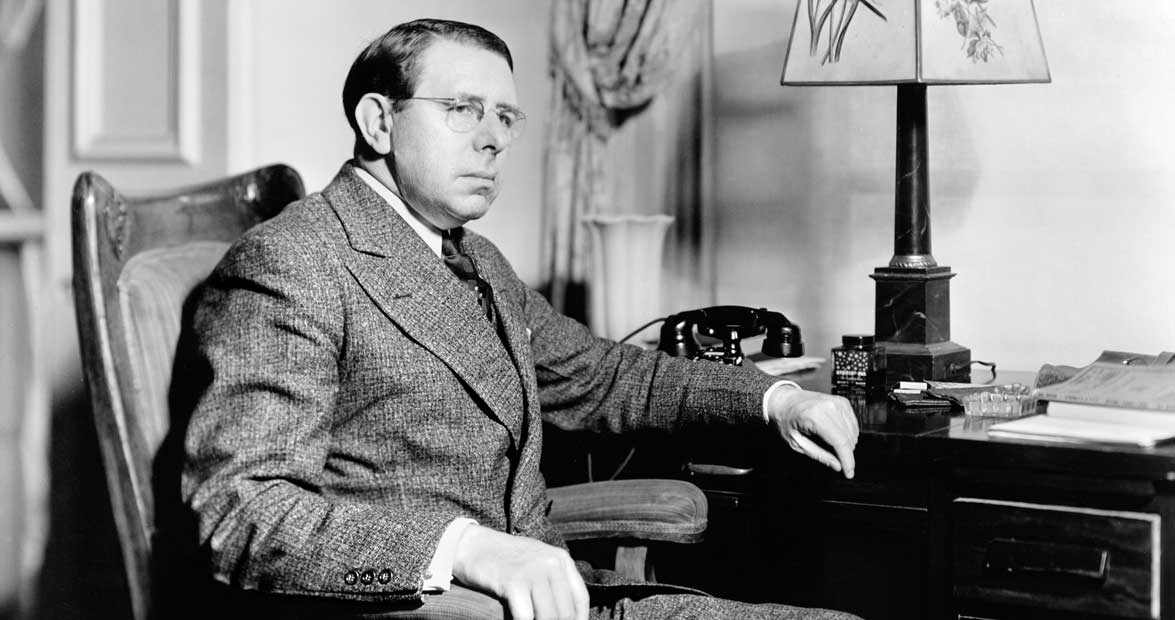 Joseph Melville Broughton is a former principal of Bunn High School in Franklin County —  and he looks the part, with his wire-rimmed glasses and dark hair neatly parted above a plain, often thoughtful countenance. In public photographs — shaking hands with Boy Scouts, eating ice cream at Central Piedmont Junior High School, christening a battleship — he rarely smiles; rather, he radiates a calm gravitas appropriate for a trusted man in charge. Colleagues and friends are impressed with his sense of humor and talent for storytelling. He worked briefly as a newspaper reporter in Winston-Salem and now is a successful farm owner and Harvard-trained attorney living near Raleigh. In his dark double-breasted suit and tie, he would not stand out in any crowd of businessmen or church elders.

Those who know him best understand him to be exactly what he appears to be: a hardworking, deeply religious man trying to make the world — and his home state — a better place. Political rivals may oppose his policies, but no one questions his integrity. He does harbor one lifelong ambition: to become a United States senator. But first, there are important things to accomplish in the statehouse.

Broughton is a man of his time, and the arc of his career reaches its zenith at exactly the moment when his state needs him most. In the contentious gubernatorial election of 1940, after besting six opponents in the primary, he campaigns enthusiastically for a Democratic ticket headed by President Franklin D. Roosevelt, who seeks an unprecedented third term. Some political observers don’t like Broughton’s chances — there is much popular sentiment against a presidential third term, and many predict that the issue may sabotage state Democratic candidates. Instead, Roosevelt receives a healthy majority and returns to the White House.

But Broughton stuns his critics: He receives the greatest number of votes ever cast for a governor in the history of the state thus far — winning by a margin of more than 50 percentage points. 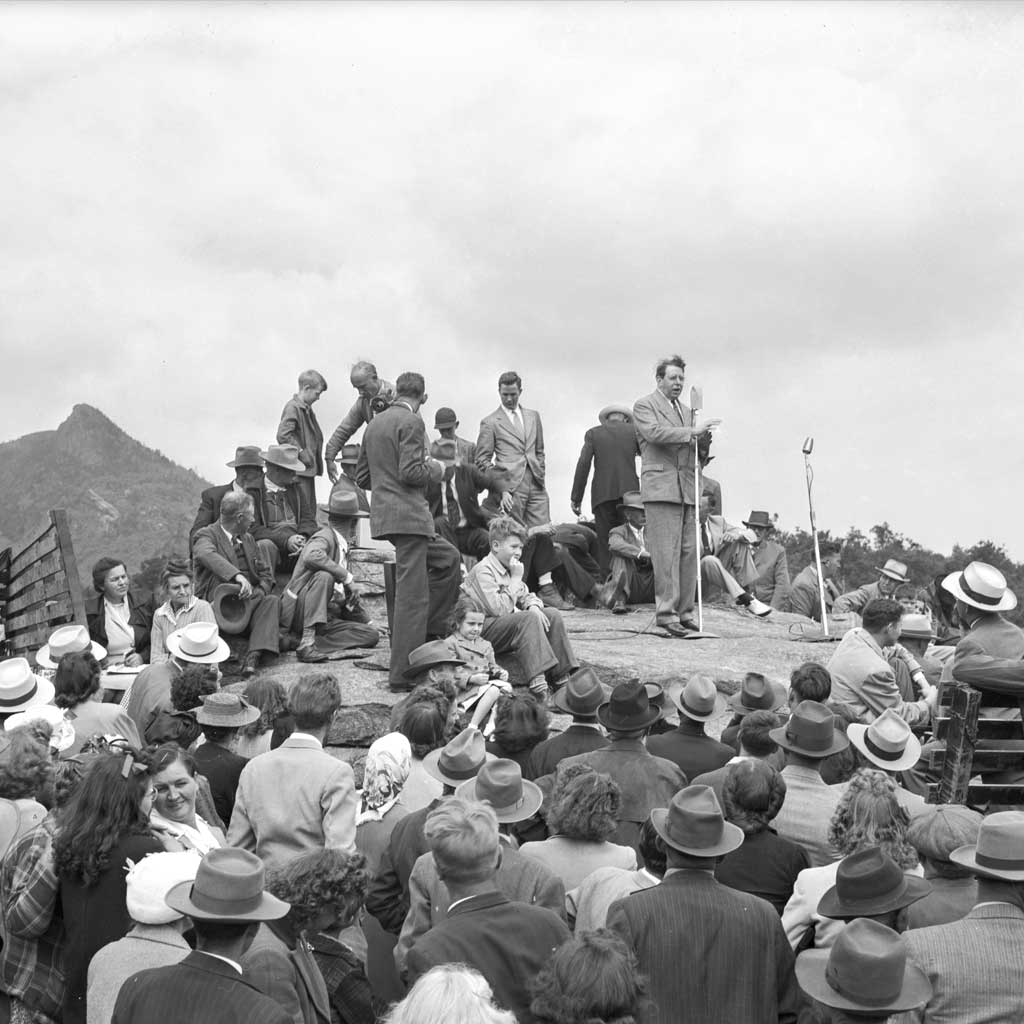 In June 1947, Governor Broughton addressed the crowd at the Singing on the Mountain gospel festival on Grandfather Mountain. At the time, Broughton was beginning his senatorial campaign. photograph by Hugh Morton Photographs and Films, North Carolina Collection, UNC Chapel Hill Library

The Journal-Patriot of Wilkesboro reports on Broughton’s swearing-in on January 9, 1941: “The new chief executive, a red carnation in the buttonhole of his morning coat, took his oath of office before more than 4,000 persons who filled every available inch of floor space in Raleigh’s Memorial Auditorium.”

In a decade infatuated with Hollywood glamour, Broughton would not be cast as a dashing leading man — he is instead sensible, steady, and reliable. Whenever he finds himself in the limelight of newspaper or radio coverage, it is invariably to promote a policy or to serve some constituency — never to advance his own celebrity. The red carnation in his lapel, far from flamboyant, merely accentuates his otherwise sober, earnest appearance. He is neither egotistical nor vain. Indeed, his entire career has been built on an ethic not of personal aggrandizement but of public service.

Broughton has arrived at this moment in the unusual position of being unbound by strict campaign promises — aside from declaring that he will repeal the unpopular sales tax on food for home consumption and generally support business and agriculture. In the interim between the primary and the election, The Waynesville Mountaineer has weighed in on this peculiar freedom: “J. Melville Broughton … will take office next January with very few definite commitments, either from his own or the Democratic party’s platform, to tie his hands.”

Thus, in his inaugural address, Broughton articulates a philosophy of governance free of partisan favor: “Government in a democracy exercises its true and noblest function when it seeks to promote the welfare of all the people. I shall endeavor to deal fairly, justly, and honorably with all, regardless of race, influence, or party affiliation.”

With war threatening, which will likely require every resource the state can muster, another governor might elect to maintain the status quo rather than embark on ambitious programs to move the state forward. But Broughton declares a slate of progressive priorities, and at the top of his list is education. He proposes an “adequate and fair teacher retirement bill” coupled with a similar plan for other state employees, plus safeguards to ensure that teachers are protected from “arbitrary, capricious, or political dismissal from service.”

In office, Broughton proves to be a tireless workhorse, not a show horse — the strong, calm center amid the frenzy of war preparations: the influx of hundreds of thousands of military personnel, increased agricultural and industrial production, fast-track construction of military bases, road and dam building, and mobilization of thousands of citizen-soldiers into a State Guard. He excels at the tedious, exacting work of creating detailed policy. Though not a spellbinding orator, he speaks clearly with firm convictions and persuades the legislature to turn his policies into law.

In addition to all of the duties of executive governance and wrangling the legislature, he issues 68 proclamations to improve morale — a rate of one every three weeks during his tenure of office: declaring Thanksgiving a holiday to be celebrated with the Stars and Stripes and the Bible; announcing the rollout of Selective Service; enlisting the aid of timber growers to the war effort; pronouncing November 10, 1942, as Marine Corps Day and October 27, 1944, as Navy Day; and, in 1942, declaring the Fourth of July to be Victory Day, with a goal of celebrations in all 100 counties.

His wife, Alice Harper, and daughter, Alice, do their part for the war effort — in 1943, they are photographed in the governor’s mansion’s ballroom for Vogue, wearing “outstanding cotton creations” in support of the state’s cotton textile industry.

Broughton’s greatest achievements are legislative — his Democratic Party controls the General Assembly — and undeniably progressive. In the realm of education, he does exactly as he promised: extends the high school curriculum through the 12th grade, lengthens the school calendar to a full nine months, institutes a retirement plan for teachers, and wins for them a salary increase. Culturally, he leads the effort to fund libraries and museums. For the general welfare, he institutes the state’s first program of workmen’s compensation, expands medical care, and launches a program of hospital construction. A longtime farm owner himself, he extends state aid to farmers. In support of the war effort, he institutes a Civilian Defense program. And in keeping with his other campaign promise, he rescinds the tax on food for home consumption.

He supports the efforts of black educators and, though not quite ready for full desegregation, works to ensure equality of funding. Addressing the 96 graduates of the North Carolina College for Negroes in 1941, he declares, “I am glad to live in and be governor of a state that does not have to apologize for the opportunities for development and training provided for its Negro citizens.”

Limited by the state constitution to a single term in the governor’s mansion, Broughton leaves office at the height of his popularity. At the 1944 Democratic Convention, he is named a favorite-son candidate for vice president of the United States — more an honorary nomination than a realistic one.

On December 30, 1944, in a farewell radio address to the people of the state, he matter-of-factly sums up his remarkable record of the past four years: “I make no boastful claims and freely admit my mistakes,” he tells them. “With God’s help and the wholehearted cooperation of the citizens of the state, I have tried earnestly to do my best. I shall leave the high office with a heart full of love for North Carolina and for the people of the state.”

Then comes an unexpected opportunity: Senator Josiah Bailey is taken ill and dies in December 1946 — leaving the unexpired remainder of his term.

Gov. R. Gregg Cherry appoints William B. Umstead, his former campaign manager, to the seat, but Broughton challenges Umstead in the primary of 1948. Broughton carries the primary by nearly five percentage points and wins the general election. But the crowning achievement of his political career is fated to be short-lived.

On March 7, 1949, The Daily Tar Heel reports: “The body of J. Melville Broughton came home for the last time at 7:10 o’clock this morning. The 60-year-old North Carolina senator and former governor died suddenly of a heart attack yesterday, only three months after he reached his life-long goal of election to the United States Senate. Today he was to have made his first speech on the senate floor, in the Southern filibuster fight. Instead he was coming home to the city where he headed North Carolina’s government through four critical war years and maintained his law offices for more than a quarter of a century.”

At last, the energetic governor lies in state. At his funeral, Broughton’s old friend Dr. Porter Graham, UNC’s president, laments, “America has lost a leader on the very threshold of high promise and dedication to his country at a critical time.”