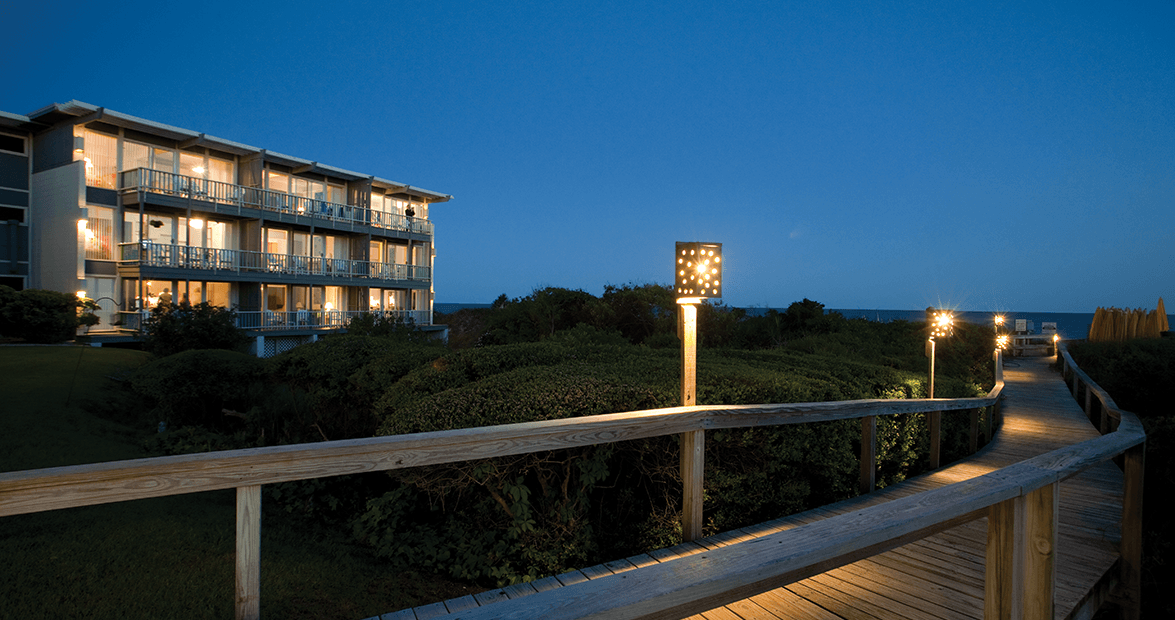 A.C. and Dot Hall live in a fishbowl.

“Mornin,’ ” Dot calls out as she stands at the stove frying bacon in her apartment kitchen. Floor-to-ceiling windows surround her, and the curtains are pulled back. A storm stirs in the Atlantic, but for now, all that matters is the smell of salt and grease drifting from her open screen door. It passes under the noses of the people walking by, strolling onto her patio, sitting in her porch swing, and sharing her space.

About 80 guests stayed with the Halls last night in their 42 spare bedrooms. Dot doesn’t know all of their names, she doesn’t know all of their stories, but she knows they’re her kind of people — family people who like to escape to the beach with their pets in tow and stay in rooms with balconies close enough to the ocean that they can almost feel the salty spray. These people don’t care for high-rises or elevators. They prefer to stay closer to the ground. They prefer to stay in one of the only places at the beach where they can watch seagulls and thrushes in the maritime forest.

When they stay with A.C. and Dot, they experience a place of tranquility, beauty, and peace. A place born out of myth and ancient legend. A place known as Atlantis. 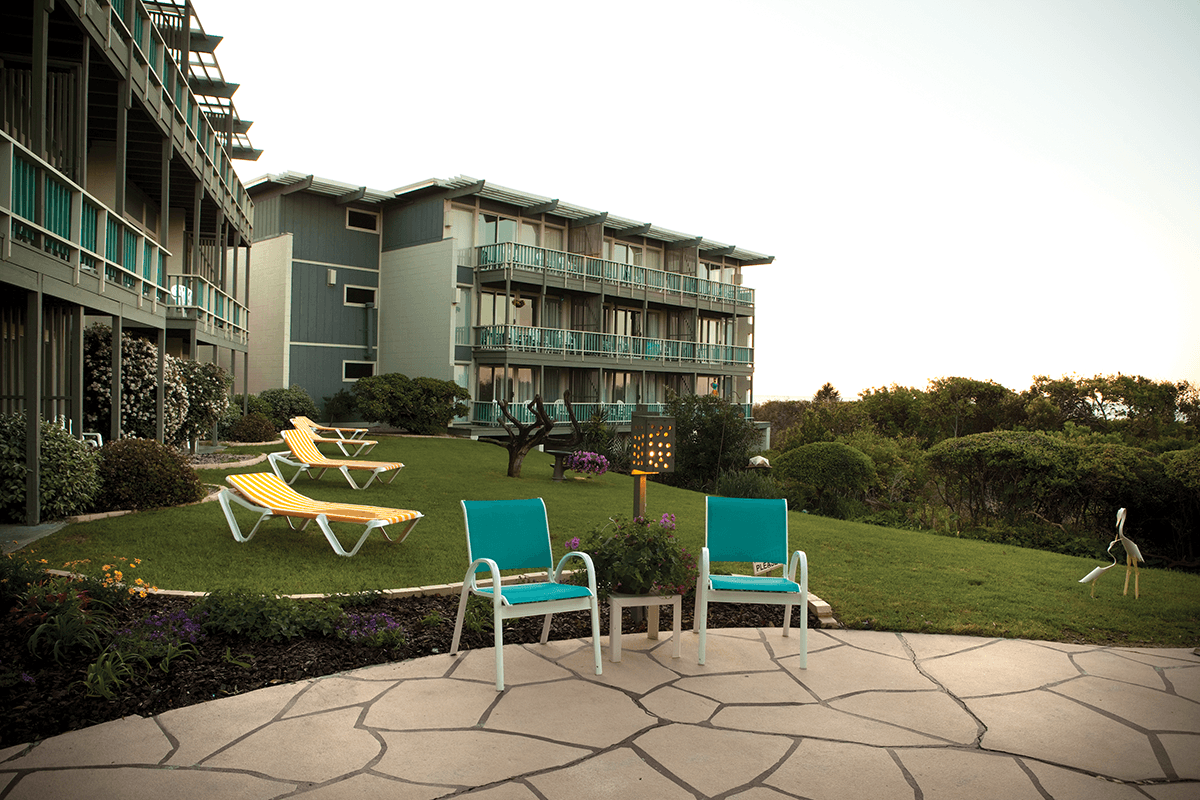 At the Atlantis Lodge, a three-story motel located at Mile Post 5 in Pine Knoll Shores, the ocean sets the rules. It draws people here and makes a lot of promises. Its salt heals wounds. Its rhythm soothes souls.

“It’s different,” Dot says. “You either learn to go with it or you leave it.”

That simple, go-with-the-flow theory that the Halls use to run their home and their business keeps people coming back.

A.C. and Dot have a scrapbook bulging with hundreds of comment cards bragging on the place. Underlines and exclamation points cover most of the pieces of paper as guests try to communicate their praise. Many of the cards mention the hydrangeas, birds, and tropical feel of the surroundings.

Instead of ripping out the natural environment, the Halls chose to blend the building into the maritime forest. The horseshoe-shaped motel encompasses an untouched area filled with scrubby trees and sea grass. Holly bushes tower in the front, and hydrangeas bend with saucer-size blooms.

A.C. refused to put in a swimming pool for years because he thought it would interrupt the flow of the land. As the city planner for Raleigh and the original developer of Pine Knoll Shores, A.C. believes in trees. If a tree trunk is four inches or larger, you keep it, he says.

But his first granddaughter, Kellie, wanted a pool, so A.C. designed one that looks more like a lagoon than a concrete hole. Live-oak leaves hang low enough to make ripples on the surface, and ivy vines encircle the fence. A waterfall creates a gradual drop into the baby pool.

But at the pool’s grand opening, Kellie started to cry.

“There’s people in my swimming pool,” she said. Kellie learned quickly that if you’re a member of the Hall family, you have to know how to share. 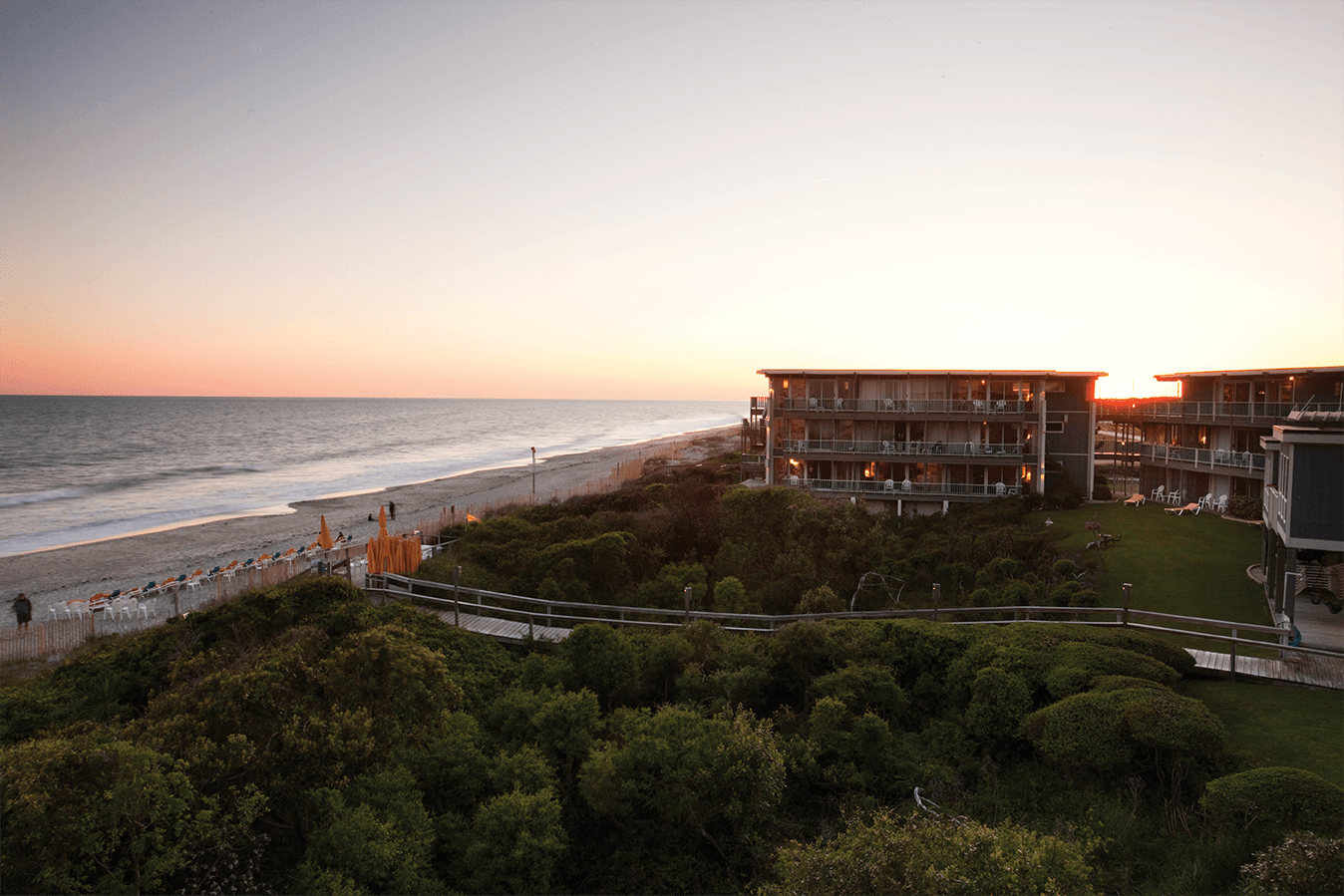 Nine years ago, Donna Hall Nally returned to Atlantis. A.C. and Dot’s only daughter was in a rough spot and needed a place to heal. Somewhere far away from Raleigh’s rush hour and her recent divorce.

So she followed the path of her grandmother and headed to the beach. Ruth Bray — Donna’s grandmother and Dot’s mother — started Atlantis Lodge in 1963 after the death of her husband. Ruth went on to become the first woman to win the Charles J. Parker Award for excellence in North Carolina tourism and receive numerous hospitality honors from the United States Coast Guard and Marine Corps. Ruth found comfort in creating a retreat for others.

Today, Donna is the general manager, and she’s proud to be the third generation in her family to look after the property. Tradition is important at Atlantis.

It’s a give-and-take, Donna says with a smile. She strives to keep up with current trends while maintaining the down-home, beach-cottage feel that loyal patrons appreciate. Last year, she purchased new couches for all of the rooms. She freshens the flower beds every season. She leaves dog treats with the welcome packages for canine guests. Those little details matter to Dot and Donna’s kind of people.

But not everyone sees the beauty in the small things. Donna remembers one bad review.

“She wasn’t used to this,” Donna says. “She wanted the Sheraton, but the Sheraton doesn’t have A.C. and Dot.”

Although the Halls do their best to keep things consistent, sometimes the ocean has other plans.

On a night late last August, Dot sat at her dining room table and looked out those floor-to-ceiling windows. The ocean’s constant whirring sound and salty smell seeped in through her open screen door. Emergency provisions covered her table — cans of smoked Vienna sausages, StarKist tuna, and SpaghettiOs.

The weatherman warned that the hurricane spinning in the Atlantic could land a direct hit on Pine Knoll Shores.

When storms approach, A.C., Dot, and Donna leave their home and retreat across the bridge to the mainland. They wait out the night in a room on the back side of a hotel in Morehead City.

“I do have a tendency when I drive out of the driveway, to wonder, ‘Is this gonna be one that really gives us a hard time?’ ” Dot says. “Then you’re just so glad when you get back home, but you never know what you’re gonna find.”

That’s a risk you take when you live in a fishbowl beside the ocean, in a place named for that mythical city that sunk into the sea.

But the ocean shows sympathy to things in rhythm with nature, to things closer to the ground. That storm late last August, Hurricane Irene, splintered the 600-foot pier a quarter-mile up the beach from Atlantis.

But the ocean spared this oasis hidden inside a maritime forest. An oasis that draws Dot, her family, and their kind of people back year after year.