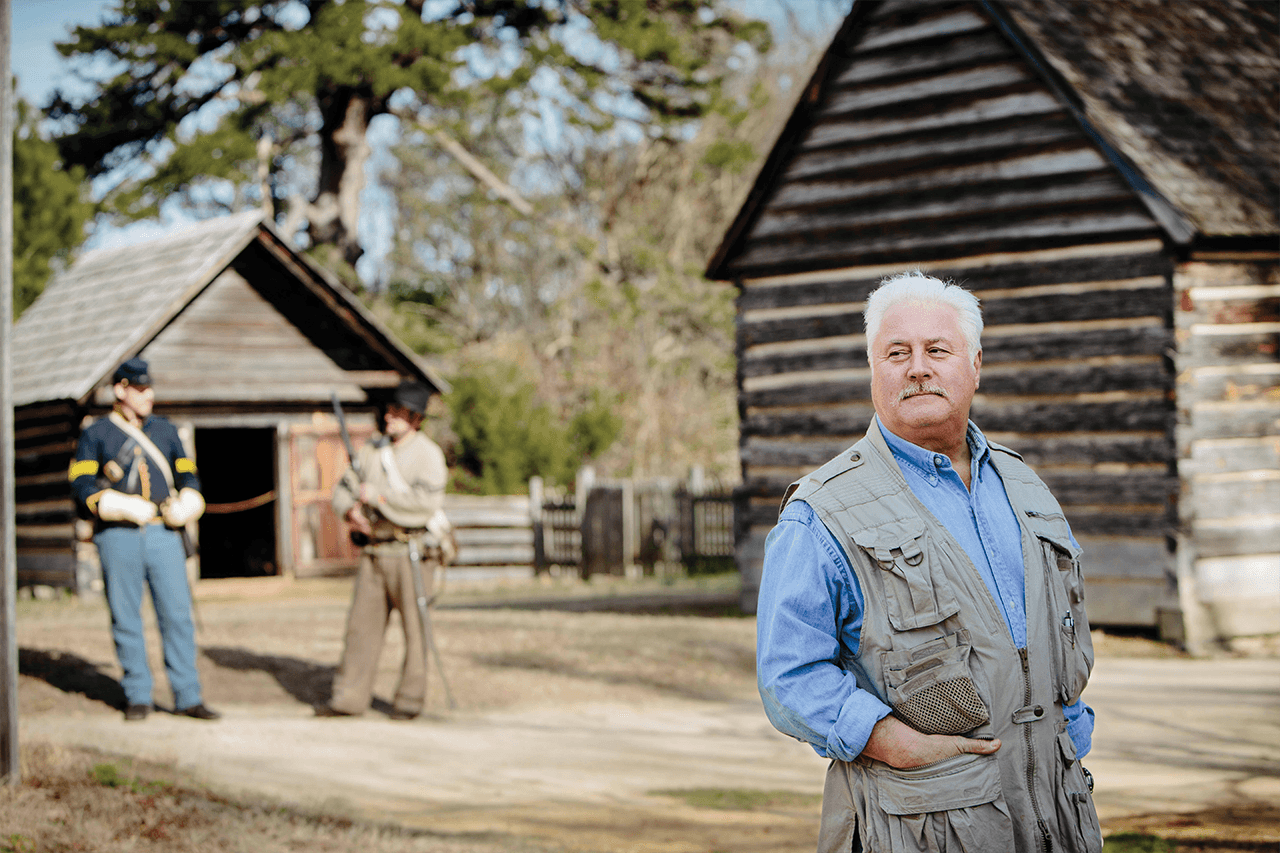 The long, cruel war is over — in history and, at last, in the pages of this magazine. For more than four years, I’ve been writing the story of North Carolina’s war — and it turns out that North Carolina is the perfect state to provide a lens for understanding the war, its causes and aftermath, its bloody and heartbreaking duration. North Carolina was both a home front and a battlefield, politically divided, yet fielding more troops than any other Confederate state, a site of both heinous atrocities and ultimate heroism.

I began the project knowing little about the war — and, in fact, that was my chief qualification: to bring no preconceived notions or prejudices, but to report the war as if I were there among those fighting and enduring it, watching and listening with great alertness and empathy.

In writing the war, I have found it hard to pin down even the most basic fact beyond a shadow of a doubt. Casualty figures were often either wishful thinking, propaganda, or mere estimates. Uniforms were anything but uniform. North Carolina regiments were reorganized with befuddling results. Even the flags changed. Legend and gauzy memoirs written long after the fact have sometimes obscured the clear truth.

To write about a single battle such as the one at Bentonville is to try to reduce three days of maneuvers by as many as 80,000 soldiers — their horses, artillery, hospitals, and supply trains — over 6,000 acres of broken landscape, mostly in drenching rain that obscured sight lines and impeded exercises, including scores of blunders, miscommunications, and assaults, along with hundreds of individual acts of remarkable heroism, tracking the decisions of dozens of generals and hundreds of subordinate officers — into a few paragraphs that capture some essence of its truth.

In the course of this challenging assignment, I have read and pondered hundreds of published books, along with hundreds of letters, private diaries, narratives compiled by descendants, and official records. Indeed, I’ve scarcely read anything else. The firsthand accounts moved me in ways I never expected, searing their hard emotions into my memory.

And I’m grateful to the many readers who wrote to me with their comments and suggestions, and offered their personal archives and family stories. I only regret that I did not have space or time to include them all.

Among other excursions, I’ve walked the battlefields at Manassas, Fort Fisher, the Crater at Petersburg, Gettysburg, the Wilderness, Wyse Fork, Fork Road, Bentonville, and Averasboro, listening to the murmuring ghosts.

I have walked the site of the magisterial Fayetteville Arsenal destroyed by General Sherman, seen the carving made by one of his soldiers in a church at Laurel Hill — “when this cruel war is over” — and walked among the mass graves of Union prisoners of war at the haunting National Cemetery in Salisbury.

I visited the ordinary clapboard house in Ohio where Sherman grew up, and in Richmond, Virginia explored the Confederate White House, with its dining room transformed into a war room graced by a portrait of  Washington, the original rebel. I toured the Tredegar Iron Works that made the cannon for Fort Fisher and the iron for armored rams like the CSS Neuse and CSS Albemarle. I visited Chimborazo Hospital in Richmond, where thousands of North Carolina soldiers recuperated — or died — and handled the crude instruments of amputation.

I have visited the serene woods at Shelton Laurel where 13 men and boys were massacred by Confederates, and the site in downtown Kinston where Maj. Gen. George Pickett hanged 22 captured U.S. Army soldiers from North Carolina.

At the mountain retreat of Lt. Gen. Wade Hampton, I listened to a Civil War reenactor band play the mellow old music of the 26th North Carolina, rescued by the Moravian band that played it and brought it home from the war, on vintage brass instruments.

I have stood in the parlor of the rebuilt Bennett farmhouse, and also in the reconstructed home of the McLean family at Appomattox Court House — ordinary family places where the savage fighting turned into sentences of surrender and mercy.

I have consulted some of the many extraordinary historians in the state and gratefully accepted the help of dozens of dedicated archivists, interpreters, and site managers. In particular, Dr. Chris Fonvielle, my colleague in the history department at the University of North Carolina Wilmington, has offered ongoing counsel and sources.

And after four years of all this reading and research and writing, it might be supposed that I’m something of an expert. But, in fact, the opposite is true.

I’m more aware than ever of the complexity of the war, its sheer expanse — geographically, ideologically, and morally — and the eternal difficulty of trying to parse it with mere words, however artful.

At the heart of the war lies an enduring mystery: how men embarked on such a near-apocalyptic crusade, endured suffering that is unimaginable to a contemporary reader, and inflicted so much cruelty and death on fellow Americans — and their own neighbors.

The more I know, the more there is to learn.

Even confined to North Carolina, the war was vast — Unionists in the Piedmont hanging their Confederate neighbors, Cherokees scalping Indiana troopers in the mountains, slaves on coastal plantations aiding runaway slaves and Union captives. One in three white men of military age died in the war — mostly on faraway battlefields from where their bodies were never recovered — and women carried on bravely in the face of unspeakable difficulty and violence. There is no accounting for the death toll of black North Carolinians.

It’s true that secession and the declaration of war by the Confederacy were caused by the determination to defend slavery. Historians have pretty much settled that argument. But while maintaining slavery was the political cause, the ordinary soldier did not typically fight for that reason. His motives were his own — loyalty to his state or family, pride, a yen for adventure, a sense of God-given duty, community pressure, or because he was conscripted and had no choice.

The conventional wisdom is that North Carolina was about evenly divided between Unionists and Secessionists — which is true only if you discount an entire third of the population. But granting that the people held in bondage were not in favor of supporting a government that guaranteed the right of slavery, some number greater than 80 percent of North Carolinians actually opposed the Confederacy.

This illuminates one fallacy that I discovered: that blacks were somehow bystanders as white armies decided their fate on a battlefield. In fact, about 179,000 blacks fought for the U.S. in the Civil War — including three regiments of infantry and one of artillery raised in North Carolina. The headquarters for black recruitment was the Freedman’s Colony on Roanoke Island.

Free blacks and slaves alike served as guides, scouts, and spies for the Union cause — often performing crucial roles in the campaigns. It was black pilots who assured the downfall of Fort Macon, runaway slaves who detailed the armaments of Fort Fisher, and black scouts who led the U.S. Army up the west bank of the Cape Fear River to flank the redoubts at Town Creek and take Wilmington.

It’s also been part of conventional wisdom that honorable men enlisted in the Confederacy out of loyalty to their state, which trumped their loyalty to country. But this, too, is a complicated belief. Prominent men like James Johnston Pettigrew and Leonidas Polk enlisted in the Confederate Army long before North Carolina seceded — and at the time, there was no guarantee that it would. And whole Confederate regiments were raised from states such as Maryland and Kentucky that never seceded — just as Union troops were raised from North Carolina and other Confederate states.

We can argue whether the soldiers’ heroism was expended in a just or unjust cause, but we cannot discount their sheer physical bravery or the fierce depth of their convictions.

Some time ago, I was reading from the series to an audience in Chautauqua, New York, and afterward a man asked me pointedly: “Why should we care? It happened a long time ago.”

My answer was — and remains — that although the war was finally settled on the battlefield, many of the issues that caused it are still very much with us. And if we are ever to reach our potential as a nation — and as a state blessed with lovely topography and a determined, talented citizenry — we need to listen for those echoes from the past and learn to heed them.

The war left us a lot of unfinished business, including exactly how the people who fought and endured it should be remembered.

I have done my best to remember them all — especially the ordinary soldiers, farmers, laborers, wives, freedmen, and slaves — with compassion and empathy. The ordeal they suffered was unique in our history, and we bear their legacy — morally complicated though it is.

Whatever the grand political causes for war, whatever great battles decided its outcome, however abstract it might seem to us a century and a half later, the greatest truth I know is this: The war was always personal.

So it is in the end a personal story. Every reader of the accounts of soldiers and civilians must come to personal terms with its meaning, test his or her beliefs against the reality of that cataclysm. Somewhere in the causes and chaos of the Civil War lies our identity as Americans.

And as North Carolinians.