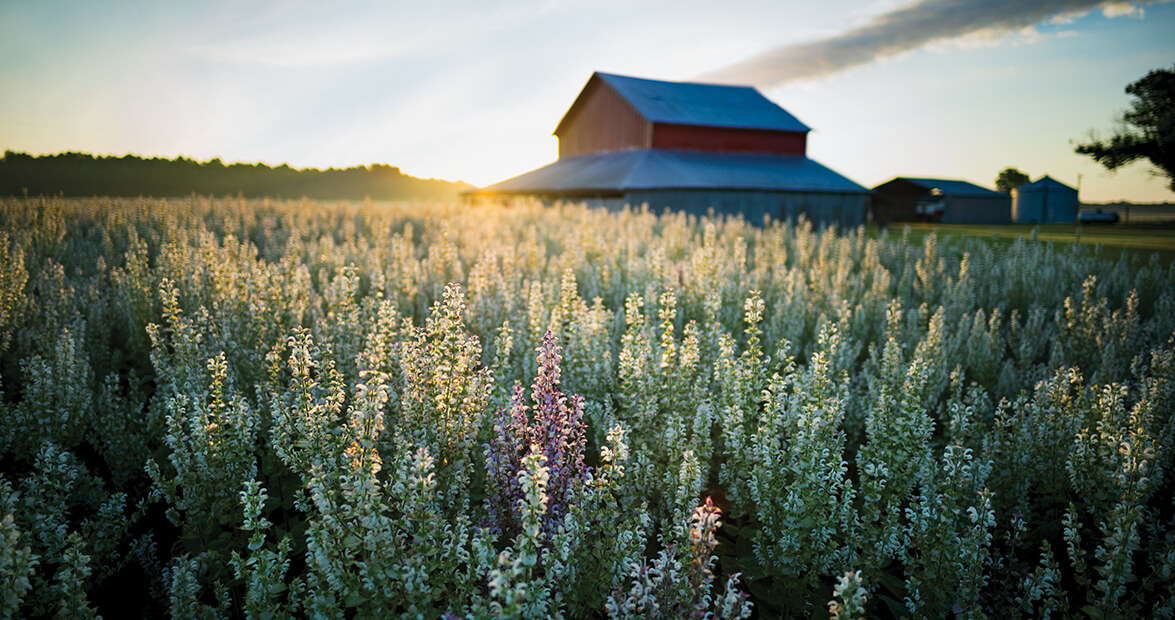 In June, Bertie County is full of familiar sounds. The hum of diesel tractor engines. The chirps of songbirds. The buzzing of Tim Smith’s mobile phone.

“You ever count at the end of the day how many calls you get?” asks Lyman Harrell, a farmer in his 30s.

Smith works at Avoca, a botanical extracting company in Merry Hill, as its agronomic manager, where he’s in charge of monitoring the clary sage production. On a still, blazing, 91-degree summer day, he watches a tractor with a rotating cylinder of long blades chop through one of Harrell’s farm fields, just a few miles from the Albemarle Sound. The reedy shoots are waist-high, and the small, pointy flowers are white and purple. Some leaves are starting to turn brown. This stuff has to be harvested. Quickly. The clary sage harvest is all about hustle.

“Man, he can really knock some acres out driving like that,” Smith says.

The rotating knives in front of the tractor chop the sage into one-inch chunks and deposit them into a neat, long row. The machine, a forage chopper, steadily moves back and forth across the field, turning the brilliant, pastel-colored acreage into a dark green. The driver will take five or six hours to finish here. Then he’ll head to the next field and do the same thing. Then on to the next one. And the next one. 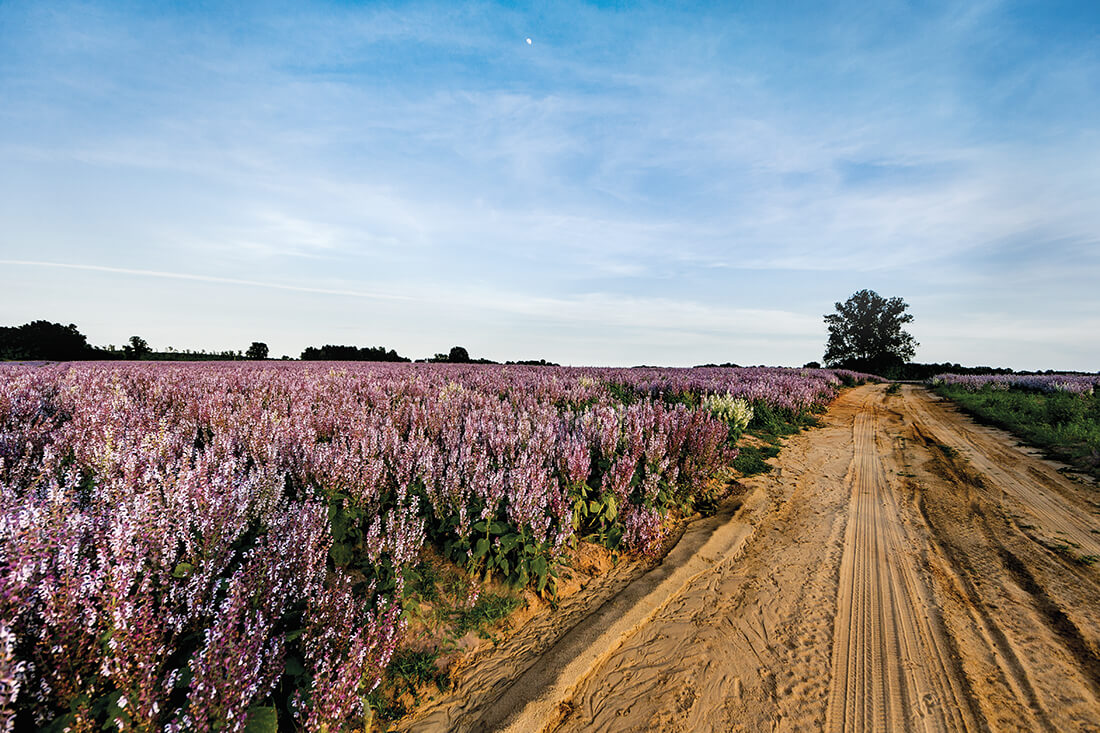 Thousands of acres of clary sage grow in northeastern North Carolina — the only place in the United States where the crop is grown on this scale. photograph by Charles Harris

Smith gets into his truck and drives a few miles down the road, past sparse trees and small houses, to another open field, where the next stage of the harvest is underway. A large machine called a forage harvester sucks up the long rows of sun-dried sage and shoots it out of a spout into the trailer of a semitruck, which rolls slowly alongside the harvester. About five acres’ worth of sage will fill the rig. Then the next truck will drive up and fill up. Over and over. Those trucks will rumble out of the fields and down the road to the Avoca processing plant in Merry Hill, where workers test and then dump the sage into long, white tubes the length of football fields. During the six-week harvest, as many as 400 trucks a day roll into the plant, causing a pop-up traffic jam on the rural two-lane roads nearby.

“Everybody’s been going as hard as they can go,” Smith says.

They have to hurry. A rain shower might put them behind. A thunderstorm might ruin most of the crop. A tropical storm might make it all worthless. A lot of livelihoods are riding on this harvest, because there’s no backup plan. Which means Tim Smith gets a lot of calls from anxious farmers this time of year. Everything has to go just right.

The planting of clary sage, 10 months before, can be even harder. Sow the tiny seeds more than a half-inch under the soil, and they might not come up. They won’t come up without the precise amount of moisture, either. Clary sage won’t flower in its first year, so farmers have to plant in the fall, so that the winter cold tricks the seeds into thinking the spring is actually year two.

Clary sage is a finicky crop.

The farmers who plant it love it.

They talk about it a lot: on the phone with Smith, over lunch at the cash-only White’s Cross Grocery in Colerain, and with friends in Edenton and Windsor. But you don’t have to get too far outside Bertie and Chowan counties before the white-and-purple fields become sparser. Before long, clary sage, as well as the conversation about it, disappears completely.

“If you get away from this area,” Harrell says, “nobody knows what you’re talking about.”

Think about the smells in your house. Dryer sheets and fabric softener. Febreze and hand lotion. You expect your freshly washed hair to smell like shampoo. You expect your clean laundry to smell like Moonlight Breeze or Island Fresh. When you shave in the morning, the smell of your Aqua Velva should last until your 5 o’clock shadow shows up. If you can’t smell your perfume after an hour, you probably won’t buy it again.

Clary sage is a finicky crop. The farmers who plant it love it.

Come harvest time, flowering clary sage plants ooze a little bit of a chemical compound called sclareol. An entire acre of clary sage typically yields only about 50 pounds of the stuff. Sclareol is rare, valuable, and powerful. Avoca’s job is to separate sclareol from piles of browning clary sage. After the sage is plucked from the fields, workers and scientists at Avoca spend the rest of the year putting it through a huge metal cylinder called an extractor. It’s a dizzyingly complex process, but to use a simple analogy, the extractor works like a coffee percolator, and the result is a refined version of sclareol, called sclareolide.

Dr. David Peele, Avoca’s president, points at a glass vial that sits on a table. The yellowed paper label, written by hand, reads, “June 20, 1963, 7:15 p.m. Avoca Farm.” At the bottom sits a yellowish-white granular substance. Sclareol. After it’s refined (into sclareolide), just a tiny amount of this stuff, as little as 0.1 percent of detergent, perfume, or aftershave, will make your favorite smells go from lasting for mere minutes to hours, even days. The vial, which is the oldest sample Avoca has, has only been opened a handful of times. But even after more than 53 years, scientists find the same thing every time they test it, Peele says: “It’s still as potent as it ever was.” 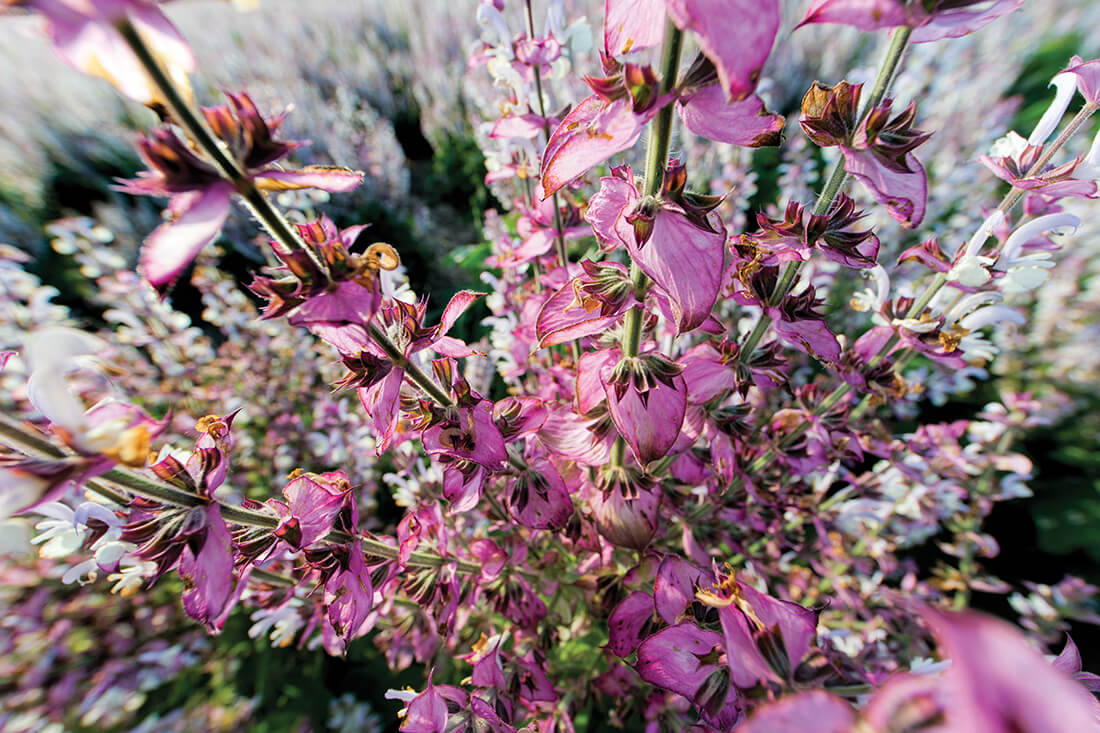 Gorgeous in the ground, stinky in your hands, fresh in your detergent: What gives? photograph by Charles Harris

Sclareolide is the key to making the world’s smells last. And there’s really only one place in the country where you can get it: here.

For centuries, hardly anybody wanted clary sage (which is not the same kind of sage you find at the grocery store). Its essential oil was a medieval treatment for sties, but the demand was so small that, aside from some gardens here and there, nobody really grew it on a large scale.

First: Back in the early 1960s, the R.J. Reynolds Tobacco Company (RJR) was worried about a shortage of Oriental tobacco. The burley and flue-cured varieties were plentiful, but concern about there being enough of the overseas variety convinced RJR to look for something different to blend into its cigarettes.

They sent botanists around the world to find a stand-in; the botanists discovered what they were looking for in clary sage. The company grew a few acres in North Carolina, harvested the plant, extracted the sclareolide, and put it into a cigarette. It worked. In the 1960s, RJR bought the Avoca farm on the shores of Albemarle Sound near Merry Hill, planted hundreds of acres of clary sage, and built a factory to extract what they needed from the plant. Problem solved.

Except, as it turned out, the problem didn’t need solving. The shortage and the high prices never materialized like RJR thought, so, within a few years, the factory shut down.

Second: The smell-sustaining substance that perfumers had long used before sclareolide — ambergris — became much harder to get. Why? Ambergris comes from the digestive system of sperm whales, floats upon the sea, clumps up, and eventually washes ashore years later, where the people lucky enough to find it are able to sell it for $20 a gram, if they can do so in a place where the trade of the substance isn’t explicitly banned, like it is in, say, the United States, which barred its use in 1972. With ambergris off the table, scientists looked to sclareolide. In 1978, a German company asked RJR if they’d get back into the clary sage business. Quickly, the Avoca factory sprang back to life, and a few hundred acres nearby were once again covered with white and purple flowers.

Clary sage is gorgeous. Some people stop, pick a spindly plant, and put it in the trunk of their car. They’ll throw it out shortly after.

Third: Phosphates became the enemy. The chemical, once heavily used in laundry and dishwasher detergents, is an amazing cleaner. But it can also choke waterways with fish-killing algae. Slowly, makers of laundry detergent, like Procter & Gamble, voluntarily removed phosphates from Tide and other products in the United States. They switched to an enzyme-based solution, which came with an unfortunate side effect: It made clean laundry smell like dirty socks. So companies started scenting detergents. They also set what they called the two-week standard: When the clothes come out of the dryer and go into the closet, you should be able to smell the freshly laundered scent for 14 days. All of a sudden, some of the world’s largest fragrance companies wanted a lot more sclareolide.

Peele says the increased demand is recession-proof. In fact, when the economy took a hit, people stopped buying as many new clothes and washed the ones they had more often, making demand for his product go up even more. And because Avoca is the only place in the world that will buy clary sage from local farmers, Peele and his company hand-pick the growers, all of them local, and set the price. While other crops like soybeans, corn, and tobacco have lost value, the price Avoca pays for clary sage has stayed the same. It’s as profitable as tobacco, farmers say, and you don’t need nearly the number of workers to grow it. Over the past five years, the amount of sage grown nearby has more than tripled, to 24,000 acres, and even though that’s a tiny amount compared to traditional crops, the amount is expected to keep going up.

Avoca doesn’t advertise. Every year, Smith sends out a text message or an email to growers, saying how much clary sage Avoca needs. Sometimes he’ll ask them if they know anyone who might want to grow it. That’s how the area went from five or 10 growers to more than 100 today. “It’s all been word of mouth and neighbor talking to neighbor,” Peele says.

Which means the sight of clary sage is becoming increasingly common in the coastal fields around Windsor, Edenton, Merry Hill, and Plymouth. Clary sage is gorgeous. People stop their cars to take pictures. Some of them pick one of the spindly plants and put it in the trunk.

They’ll throw it out of the car shortly after.

One farmer says clary sage smells like a room where a cat keeps missing the litter box. Or dirty socks. The sclareol itself doesn’t smell, but the essential oil has an aroma that one website calls a “bracing herbaceous scent that smells like lavender with leathery and amber nuances.” Most people say it stinks.

Lyman Harrell and Tim Smith laugh about this. So do the truck drivers who haul it, and the other farmers who grow it. Every person in Bertie County knows the same joke. What does clary sage really smell like? Money. Which makes those white-and-purple fields look even better.