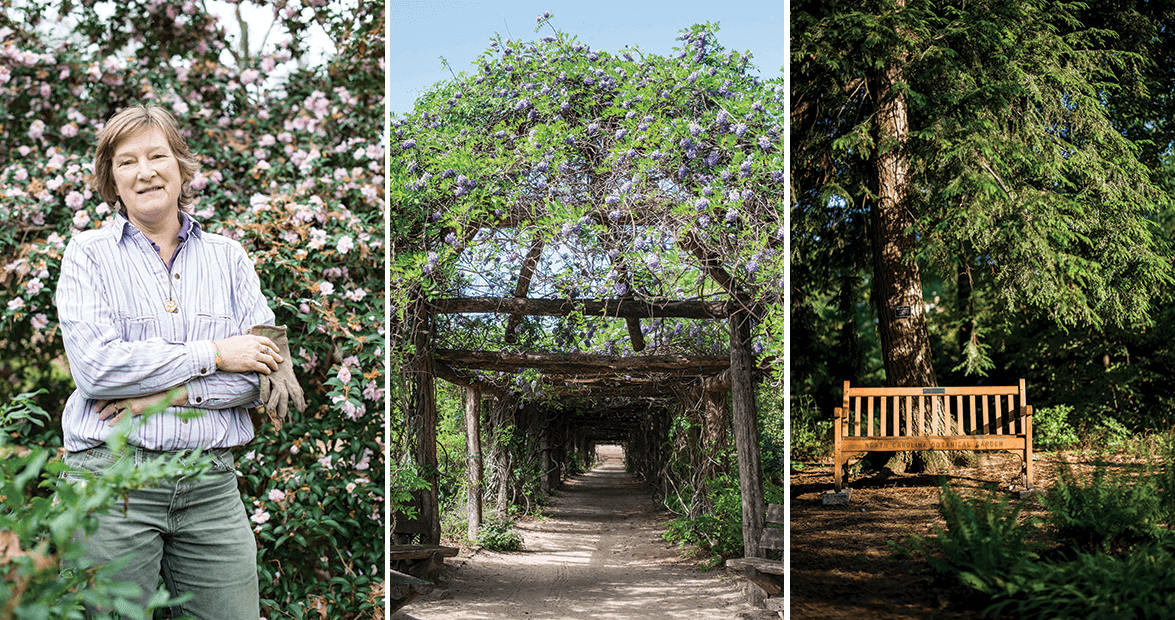 You can see the world’s plants on five acres in Chapel Hill. The similarities and differences and the changes.

Coker Arboretum — at the intersection of Raleigh Street and Cameron Avenue, about a block from busy Franklin Street, a few hundred feet east of the Davie Poplar, and around the corner from the Old Well, surrounded by those instantly recognizable icons of the University of North Carolina at Chapel Hill — is quiet. It’s not crowded or hectic. But its plants hold an understated, often overlooked, importance.

Inside a rock-wall boundary, Coker Arboretum has some of the best examples of vicariance anywhere in the southeastern United States. For example, consider the magnolias. Southern magnolias (Magnolia grandiflora), native here, grow near star magnolias (Magnolia stellata), native to Asia. One is evergreen; one is deciduous. One is tall, growing 60 to 90 feet; the other is stumpy, only reaching 15 or 20 feet. The flowers of one are bold, with wide-petaled blooms symbolic of the region in which this tree grows. And the flowers of the other are spindly and spider-like with narrow petals that look strange to Southerners.

The American and Asian magnolias are one example of what happened to plants when the continent Laurasia split millions of years ago. Plants of the same species acquired different characteristics as they adapted to their new regions, a process called vicariance. The plants are similar, but not the same.

Every person who walks through Coker Arboretum, and who takes notice of the differences and the similarities between the magnolias and pauses to think, fulfills the vision of Dr. William Chambers Coker. The first professor of botany at UNC, Coker had many ideas for this place.

In 1902, the university’s president, Francis P. Venable, suggested that Coker turn the boggy cow pasture on north campus into something useful. Coker had $10 and one gardener. By 1903, he had an arboretum. The start of one, anyway.

Coker saw the arboretum as an outdoor classroom, an informal place for students to learn differently, to learn through experience. Although the place has always been called an arboretum, Coker wanted it to be an ornamental grounds instead of a comprehensive collection of trees. He focused on plants native to the southeastern United States. He wanted every addition to have a reason for being here, to have a history or a story, like the magnolias that demonstrate biological evolution.

One of the rare trees Coker planted was the Walter’s pine in 1920. The species is named after a South Carolina botanist and is native to swampy areas from South Carolina to Florida.

Coker died in 1953. But this tree still stands along the northern edge of his arboretum. In 1992, that tree was designated State Champion for being the largest Walter’s pine in North Carolina.

Today, the Walter’s pine is close to 100 feet tall and has caught the attention of another arboretum caretaker.

If you ask Margo MacIntyre, the arboretum curator, to name her favorite spot, she smiles.

“Near the Walter’s pine,” she says, “down by the creek, it looks like a really well-established Southern garden.”

One hundred ten years after Coker put the first plants in that pasture, the arboretum that bears his name is a fixture on the UNC campus. And it’s MacIntyre’s job to maintain it.

She seems like the right choice. MacIntyre grew up in Chapel Hill only a mile from here. Her Girl Scouts troop met at Chapel of the Cross church that borders the arboretum to the north, and the arboretum served as the backdrop for her wedding photos.

MacIntyre attended Warren Wilson College, majored in environmental studies, and spent time working in Salisbury. But in 2004, she returned to Chapel Hill and began working for the North Carolina Botanical Garden, which took over maintenance of Coker Arboretum in 1982. In 2008, MacIntyre became arboretum curator.

“You see it, and you feel at home,” she says of the place where she works.

As a UNC student in the early ’60s, he walked through the arboretum every day.

“I wasn’t much of a botanist,” Rich says. “But I could enjoy the colors and the changes throughout the season.”

Rich graduated with a degree in accounting in 1964, returned to his hometown of Atlanta, and spent 30 years crunching numbers for Coca-Cola. He never thought he’d move. But as Atlanta grew and changed and became a different city than the one he knew, Rich and his wife decided to retire to Chapel Hill.

They now live in a gray-shingled house on Franklin Street, just three blocks from Coker Arboretum.

Every Tuesday morning at 9, Rich walks to the arboretum to join a group of volunteers who call themselves the Coker Nuts. They have T-shirts and everything. The group spends three hours every week helping MacIntyre maintain Coker’s vision. They deadhead plants, pick up sticks, rake paths, and pull weeds.

It’s difficult for the volunteers to see the difference they’re making, pulling one weed at a time. MacIntyre tells them to walk away, come back, and look at the area as a whole. The task at hand seems minimal, but the effects are not.

Vince Walton worked at the arboretum for three years as an undergraduate. He’s now in his final year of law school at UNC. He says the work ethic he learned while pulling weeds and raking leaves will translate to his civil litigation career.

The arboretum wasn’t Walton’s first choice. He procrastinated from selecting his work-study job, and by the time he got around to it, the arboretum was one of the highest paying positions left. So he took it.

And he’s glad he did. Walton had the opportunity to leave a permanent mark on this campus when he helped build a walkway and water feature that will be here for decades of classes to come.

Like all students who spend time in Chapel Hill, Walton will carry a piece of the university with him wherever he goes. Whether they have matching class rings or Greek symbols or simply memories of where they worked, all alumni share this place. Not the same experience, but similar.

To learn more about Coker Arboretum and the man who created it, check out these two books.

A Haven in the Heart of Chapel Hill
Published in 2004 by the Botanical Garden Foundation and written by then-curator Dan Stern, this book commemorates the first 100 years of the arboretum. Area artists contributed renderings of arboretum scenes to illustrate the history of this place. Proceeds from the book support the Coker Arboretum Endowment. To purchase the book ($26.70), call (919) 962-0522.

Essays on William Chambers Coker, Passionate Botanist
Written by Coker’s niece Mary Coker Joslin, these essays tell of the botanist’s varied talents, interests, and accomplishments. Chapter 6 is devoted to his work on the UNC campus. To purchase the book ($36.95), visit uncpress.unc.edu