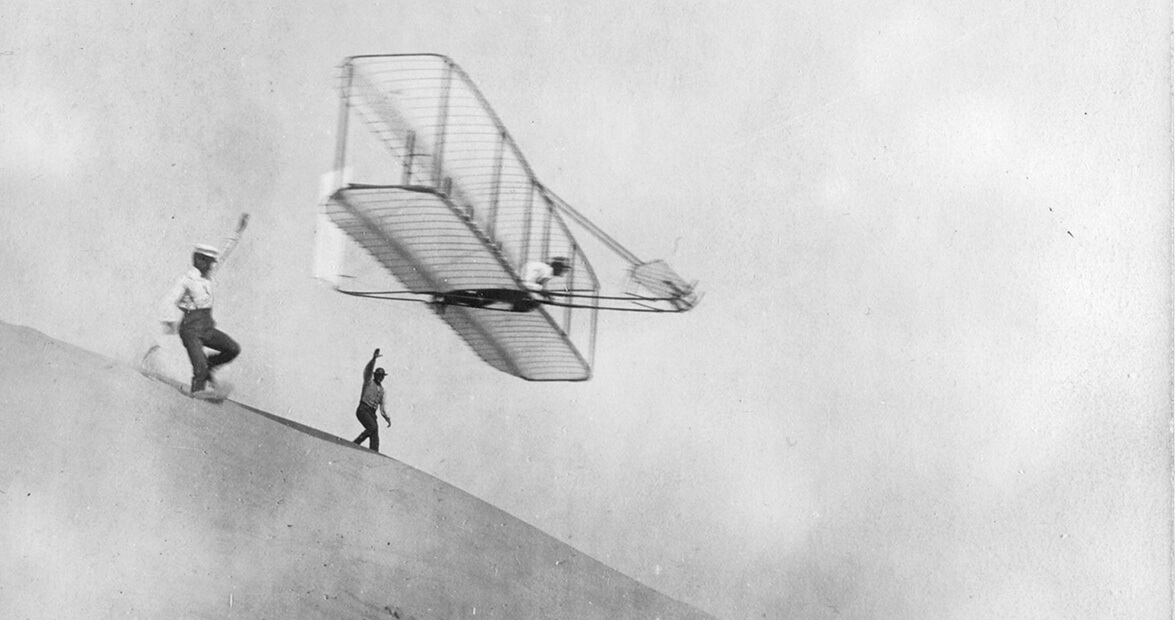 On the banks of the Atlantic Ocean in the winter of 1903, two brothers from Ohio braved death and humiliation and piloted the first powered flights in human history. Launched from a camp at Kill Devil Hills and witnessed by crew from the nearby lifesaving station, the morning flights of an engine-driven, heavier-than-air machine took man into the air and changed the new century.

Over the years, those events turned into dates in high school textbooks, and debates between North Carolina and Ohio over who should get the credit. Often lost in the conversation was the story of how two insignificant bicycle mechanics with no money developed a working aircraft, less than 20 years after the appearance of the first automobile.

In his latest book, The Wright Brothers, Pulitzer Prize-winning historian David McCullough examines their childhood in Dayton and their difficulties at Kitty Hawk and Kill Devil Hills. McCullough tells a story of a family’s curiosity, and a brotherly determination to overcome failure, ridicule, and skeptical natives on the Outer Banks.

Already set to become an HBO miniseries, The Wright Brothers was a subject David McCullough knew nothing about until he combed through their papers, diaries, and letters to tell an American tale that needed to be told: how two men learned how to fly. 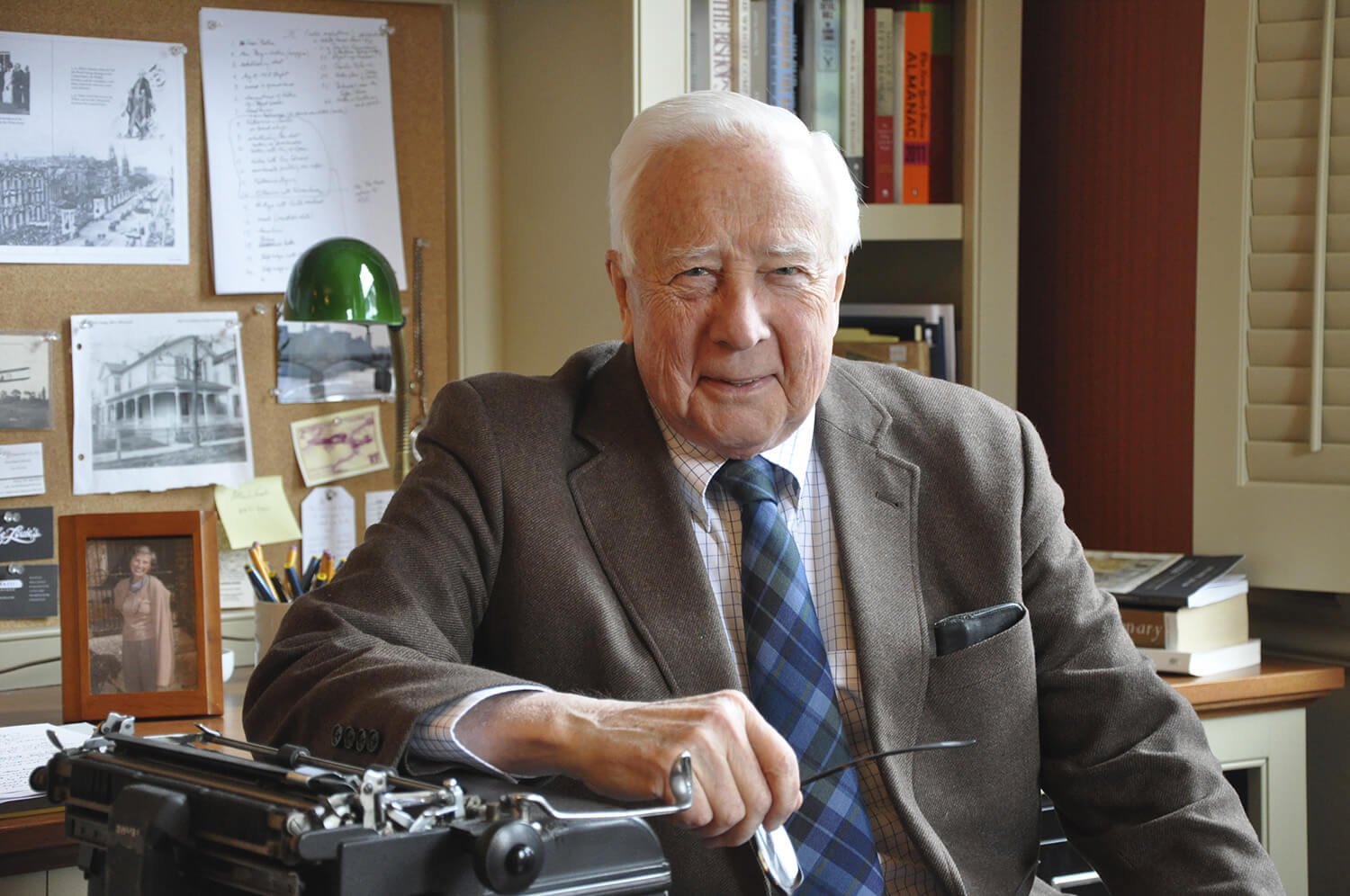 Photograph courtesy of William B. McCullough

Our State: At the dawn of the 20th century, Dayton, Ohio, was bustling with creativity; Kitty Hawk, North Carolina was not. Why did the Wright brothers go to Kitty Hawk to make history?

McCullough: They needed wind. They wrote to the National Weather Bureau to find out where there was plenty of wind to experiment with their gliders. They also needed a soft landing. The Outer Banks had sand dunes and wind. It was an ideal choice.

But they loved the adventure of it. At that point, it was the farthest from home they’d travelled in their lives, and they kept going back.

OS: How remote was Kitty Hawk in 1900, even from other parts of North Carolina?

McCullough: They travelled by train to Elizabeth City where Wilbur looked for someone to take him by boat to the Outer Banks; there were no bridges then. Even in Elizabeth City, no one had heard of Kitty Hawk. He finally found one fellow to take him, and it was a horrific crossing. His account of that voyage is like something out of Jules Verne.

McCullough: Yes, after landing on the Outer Banks, he went directly to see Bill Tate. When Wilbur wrote to make inquiries about the weather, Bill Tate had written a wonderful response telling him to come on down, that he’d be welcomed. Bill Tate put him up for a few days, helped him learn his way around and remained a steadfast ally in the pioneering effort. He was very conscious of something important going on.

OS: Who lived on the Outer Banks? And what did they think of the Wright brothers?

McCullough: They were descendants of people who shipwrecked and never left. They were very hardy people; had to be just to survive. There were no roads. Most of them made their living fishing and lived on very little. It was a primitive life.

At first they thought these two fellows were nuts, particularly when they went out on the beach to study the birds. They were fascinated by how birds could soar without flapping their wings. To them it was the secret of flight.

Orville later said, “Learning to fly by studying birds was like learning magic from a magician.” Dressed in business suits with starched collars and neckties, they would walk up and down the beach, flapping their arms and twisting their shoulders, imitating the birds. The locals thought they were something out of a mental institution. But they began to realize the brothers were serious.

And what impressed them most was how hard the brothers could work. One of the men on the Outer Banks, John T. Daniels, called them “the workingest boys I ever saw in my life,” even though, at first, he was convinced they were cuckoo.

OS: Orville and Wilbur weren’t scientists; they were bicycle mechanics.

McCullough: They grew up in a house with no running water, no indoor plumbing, no electricity, and no telephone. But it was a house full of books.

Their father, who was an itinerant minister, insisted they all read, and that they use the English language properly and effectively. Reading their letters in the Library of Congress, you realize these weren’t just simple bicycle mechanics. They never finished high school, but they were erudite and educated people, done on their own.

The older brother, Wilbur, was unquestionably a genius. Orville was mechanically innovative. But Wilbur had a reach of mind that was far beyond the norm. He was the big brother. The boss.

They committed themselves to achieve something that had never been achieved in human history. And they did it, with no connections, no money, no foundation or university or political support, just modest proceeds from their bicycle shop.

OS: What adversity did they face, from arriving on the Outer Banks in 1900, to the famous flight in 1903?

McCullough: Reading their letters about what they went through, I don’t think I would have lasted a week. They had to build everything. They had to sink their own well. There were terrible windstorms and floods that destroyed things that had taken them weeks to build. And they had to walk four miles from their camp at Kill Devil Hills to send messages to civilization. And then they were hit by a murderous storm of mosquitos. It was pure hell.

OS: Describe the “whopper flying machine” that took flight in 1903.

McCullough: It was a biplane with two wings. You had to lie on your stomach on the lower wing to fly it. The propellers were very large and behind you, and the motor was right beside you. It was controlled by a warping system that controlled the wing. It took off on a track made of two-by-four, and shot into the air.

The motor was their own creation, made of aluminum. They took it all apart and brought it in crates from Ohio by train and then by boat to the Outer Banks. Then they had to put it all back together again. If things broke they’d have to go back to Dayton to fix it and then bring it back. But that never caused them to quit or to blame other people, or lapse into god awful self-pity.

McCullough: It was bitterly cold, and the wind was travelling 25-27 miles-per-hour out of the north. They signaled for some of their new friends from the lifesaving station to come give them a hand and move the machine up to the starting point. They flipped a coin. Orville won the first toss. Wilbur would run alongside to make sure it stayed on track. The plane warmed up and off Orville went.

It was a brief flight, lasting only 12 seconds. And he only went 120 feet. People asked him afterwards if he was scared. There wasn’t time to be scared. It was that fast.

But it was the first time ever that a motor powered machine carrying a pilot took off into the air on its own and landed. They had set up a camera to record the event, operated by John T. Daniels, who had never taken a photograph in his life, and he took one of history’s greatest photographs.

Before the day was over, Wilbur flew almost 600 feet. There was no question they’d done it. But they didn’t have a practical airplane yet, a plane that could bank, turn, fly in a circle, land safely, take off safely. It took them another two years working in a cow pasture outside of Dayton, Ohio, before they perfected the 1905 flyer, which was the first practical airplane in the world.

McCullough: Yes, there’s no reason to doubt that. The teacher was a very reliable, solid, Midwestern school teacher.

OS: What caused that childhood dream to come true?

McCullough: Strength of character is a powerful element in history. I think we see it here in a very dramatic fashion.

OS: What can the next pioneer learn from Wilbur and Orville Wright?

McCullough: I feel very optimistic about the future. I know that sounds naïve to many people, but I don’t care.

The American spirit is as alive now as ever, though we’re less conscious of it. What Wilbur and Orville were telling us was to find work you love and stick to it. They loved working. It was their joy in life. I would have wanted to write this book even if they hadn’t succeeded.

OS: What did you think of the Outer Banks when you travelled here to write the book?

McCullough: The sky is so spectacular there. You can look up into that sky and see three different kinds of weather in one sky. Wilbur and Orville both wrote about the spectacular air and sky, and the great ocean. They had never been to an ocean before.

McCullough: Yes, no question. But in fairness, Ohio can also rightly claim it began there because that’s where they built the plane. Both states deserve to proudly claim flight.