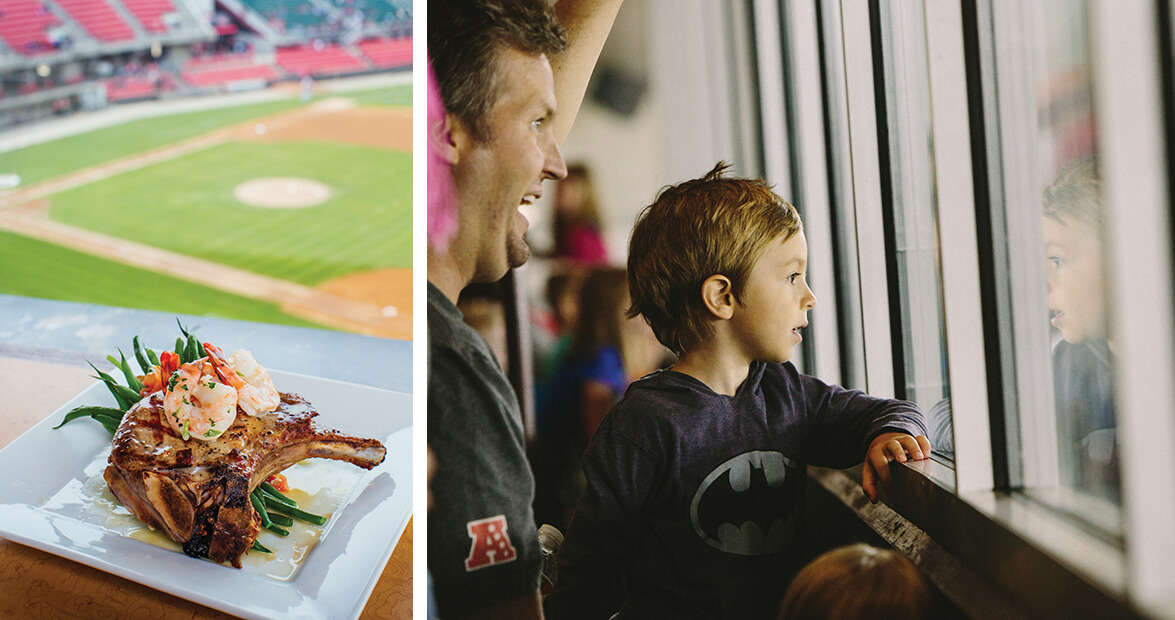 When we sing “Take Me Out to the Ball Game,” we don’t mean the “take me out” part so literally. But at Five County Stadium, the minor league ballpark outside Zebulon, there’s more to the experience than beer, foul balls, and the seventh-inning stretch.

How does a glass of wine, an elegant entrée, and a lovely view sound?

From the minute you hand over your ticket at the front gate, you know you’re in for a treat. “Cattails?” says a young woman at the turnstile. “Lucky duck. It’s nice up there.”

Cattails Restaurant, located on the stadium’s top level, is all brown suede chairs, gleaming wood, and a long bank of windows with a magnificent view of the home-team Carolina Mudcats taking the field. Over a dinner plate, you might see a runner slide across home plate.

Through those windows, it’s as if you can see for miles — far across the countryside beyond the scoreboard. And you can imagine how, before there was a baseball diamond here, all this was just a field of tobacco. Which is an odd location for a baseball stadium, but Mudcats owner Steve Bryant can explain.

The original plan, he says, was to build a ballpark in downtown Raleigh, but a league rule prevented it. The Raleigh ballpark would have been too close to the Durham Bulls, so it had to be located elsewhere.

Enter the plan to build a stadium in a place that’s been described, with some justification, as the middle of nowhere. But actually, Five County’s proximity, about 30 minutes east of Raleigh, attracts people from Wilson, Clayton, and Rocky Mount, among other towns.

“A couple from Raleigh might want to meet a couple from Greenville,” Bryant says, “and we’re right in the middle.”

What makes the Mudcats different

Baseball holds a special place in the American psyche. Though we might not follow every team and every game, we like the romance of a ballpark in summertime. Minor league ballparks like Five County distinguish themselves from the splashy major leagues by being the place where you can still smell the grass and hear the crack of a bat, and where children still race the team mascot around the bases in the fourth inning. Your ticket might even come with a coupon for a loaf of bread at the local Piggly Wiggly.

In North Carolina, there are teams with great names (the Kannapolis Intimidators), quirky logos (the Hickory Crawdads), and beautiful skylines (the Charlotte Knights). There’s even a team that’ll always be a bit sexy, thanks to Susan Sarandon and Kevin Costner in the movie Bull Durham.

Food is what sets the Mudcats apart from all the other teams in North Carolina, though at first glance you wouldn’t know it. From the lower levels, Five County Stadium is a lot like any other ballpark — concrete risers, fold-down seats, and Dippin’ Dots carts.

That setting makes the contrast with Cattails all the more striking.

“If you want a hot dog and a beer, or if you want to go upstairs and eat a veal chop — we wanted something that would fit that niche,” Bryant says. “Logically, you might put a sports bar up there. But every town has a sports bar. Cattails is a lot more upscale than you’d expect at a ballpark.”

The restaurant’s menu reflects this sophisticated vibe: It includes an Angus burger (made with short ribs), beef and pork tacos, and stuffed pork chops with a sage dressing and shrimp topping. The shrimp and grits dish is a standout, too: stone-ground grits topped with a rich brown gravy, shrimp, tasso ham, chunks of mushrooms, and succulent bits of roasted tomato.

Whether the Mudcats win or lose, all that good food leaves you happy. Which goes a long way toward attracting people from neighboring cities and towns. Because, though fine-dining restaurants like Chef & the Farmer in Kinston and SoCo in Wilson County have opened up not far away, in the immediate vicinity, Cattails stands alone. 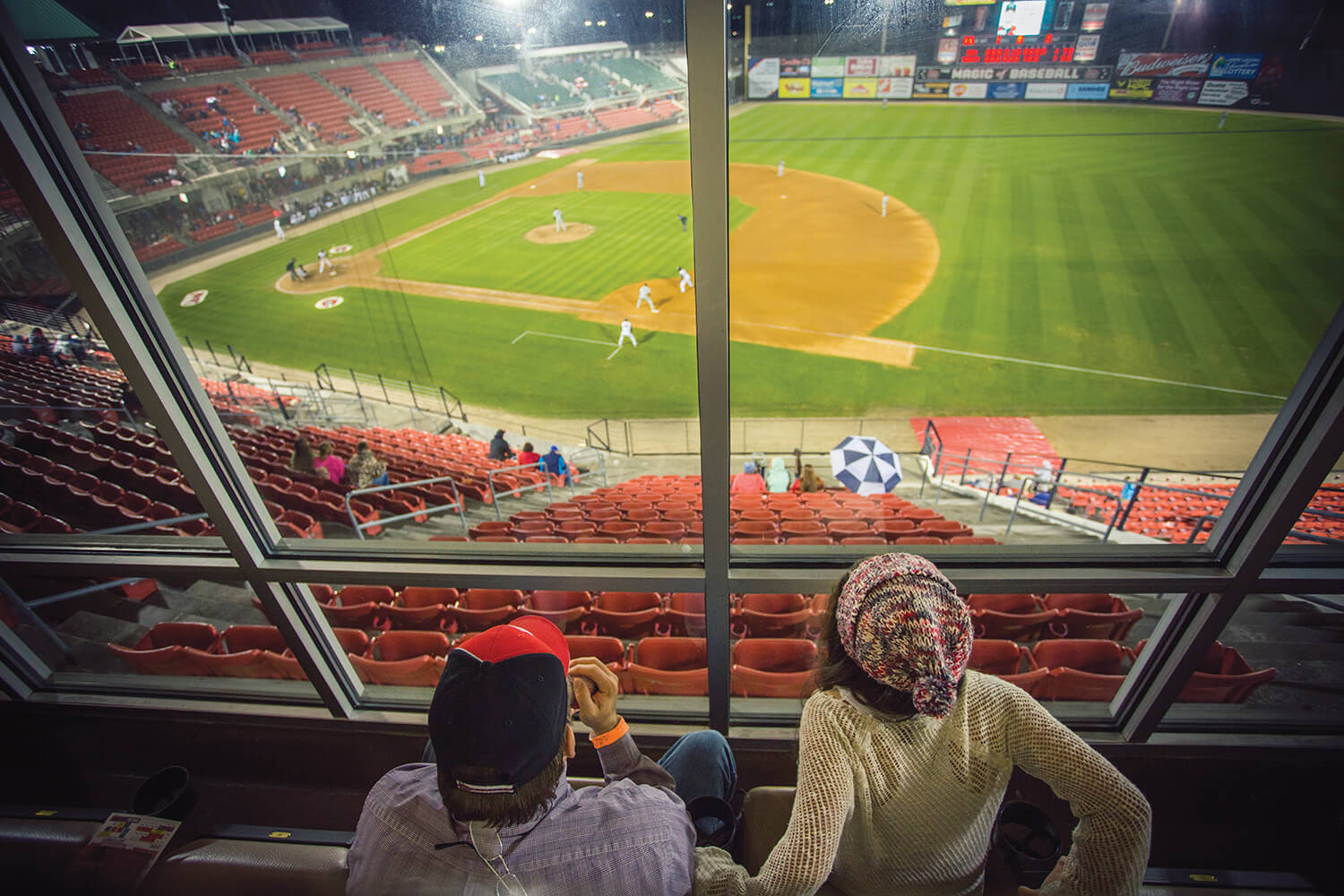 Room with a view

With all the grandeur of an oceanfront dining room, Cattails has become a place to celebrate milestones.

Today, Allwyne and Peggy Ann Richards of Fuquay-Varina are clinking glasses of red wine to celebrate their wedding anniversary. They’re both baseball fans, so they’re celebrating 42 years of marriage by going to baseball games, in honor of No. 42, Jackie Robinson. They’ve been to major league games, and they even went to Orlando for spring training.

They’ve been to Five County before, but this time, the draw was a chance to have a nice dinner in a spot that let them celebrate and watch baseball at the same time. It’s kind of a baseball doubleheader: Two reasons to visit one place.

Looking around, at the big windows and the view of the diamond, Peggy Ann says the food is great. But what’s really special is the place, the chance to sit so comfortably in a place that’s still a small-town ballpark.

“It still has that minor league, family, real-baseball feeling,” she says.

“The bigger stadiums, you lose that.”