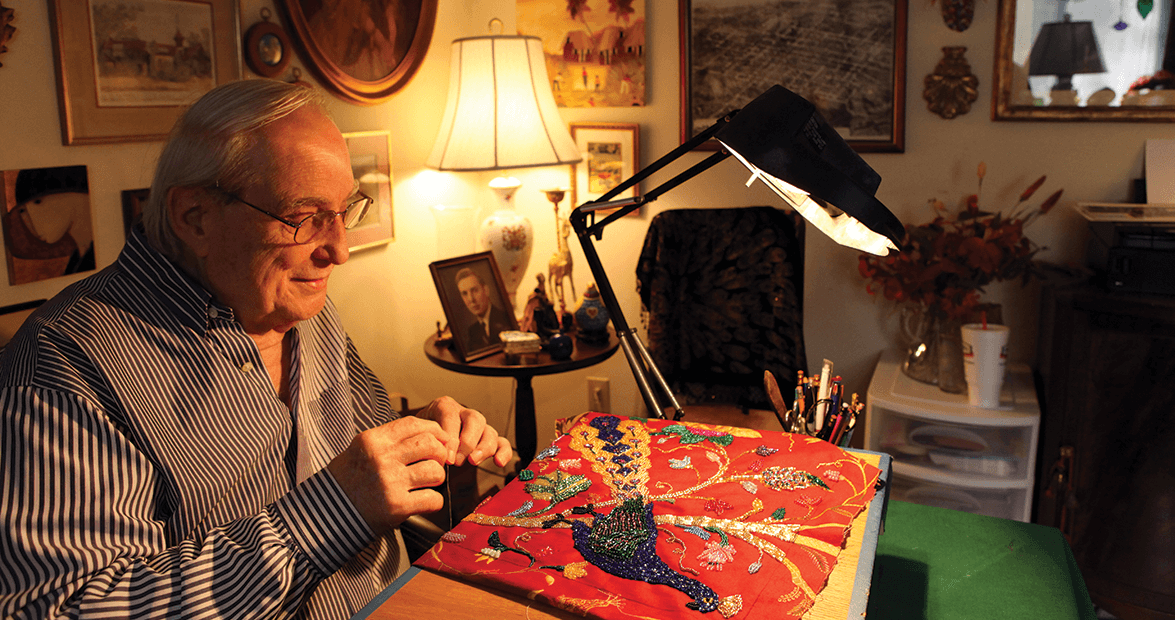 Eric Ennis is surrounded. He sits at his dining room table. Sewing needles, thread, beads, and fabric cover the surface where he works. Inside his apartment on Edwards Mill Road in Raleigh, museum-worthy objects cram the small space: chandeliers, golden sconces, crystal dishes, original paintings. Classical music tinkles softly in the background. If ever a place reflected the personality of its owner, this one suits Ennis to a tee.

Pieces of framed fabric adorned with beads hang on the wall behind his chair. Each one has an “E” embroidered with beadwork in the bottom right corner. For 30 years in his professional career, Ennis made gowns for governors’ wives, debutantes, and beauty queens.

“I made a heck of a lot of what I call sippin’ and prayin’ dresses,” Ennis says.

After retiring from fashion design in 1992, Ennis missed the beading work that became his signature. One day he pulled out a piece of fabric he bought in Italy and stitched beads over the pattern.

“I carried it to an artist friend of mine and said, ‘What do I have here?’ ” Ennis says. “And she said, ‘Keep going. … I’ve never seen anything like this.’ ”

At 80, Ennis keeps going, making textile art by hand-beading patterns onto fabric. These days, when he wakes up in the morning, his hands shake, often so badly he struggles to sip his coffee without spilling it. Ennis has neuropathy, a degenerative nerve disorder that causes numbness in his hands and feet. So he does most of his work in the afternoons and evenings when his hands settle down.

“That’s the miracle of this whole thing, that I’m able to do it,” Ennis says.

Today, he’s laying out beads to begin a new project. The colors of the fabric don’t matter, Ennis says. He selects the swatch for its composition. Then he brings the fabric to life with glass beads. It takes him hours to decide which colors of beads work best.

“I think it’s going to be spectacular,” Ennis says of the elements scattered in front of him.

He picks up his needle, threads a bead, and his fingers begin to sew.