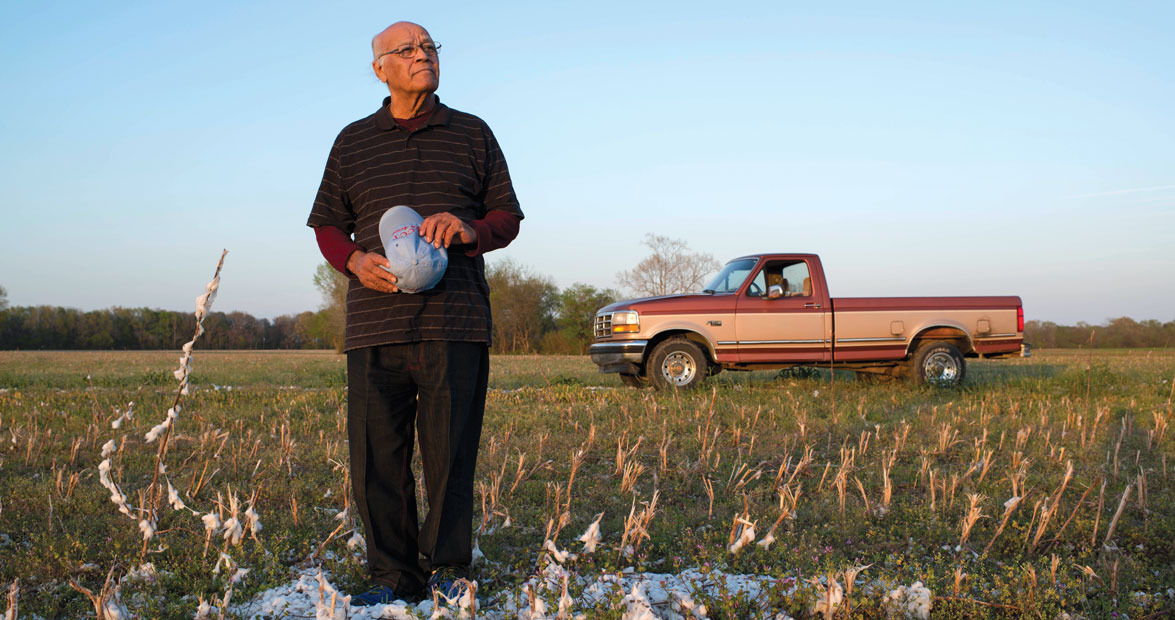 In 1947, When Gary Grant comes to Tillery, he is a skinny 4-year-old kid with knock knees and a full head of curly hair. Tillery — originally called Tillery’s Crossing after a nearby plantation — is a small town in the Roanoke River valley, a remote landscape of long horizons across table-flat fields of cotton, soybeans, peanuts, and corn. It sits at the crossroads of Route 561 from Halifax and Route 481 from Enfield.

Tillery is a lively place. Seven trains stop here each day — four freights and three passenger trains. A sawmill, cotton gin, and market serve the business of the farmers. On Saturdays, the farmers and sharecroppers converge on the town — its barbershops, post office, bank, restaurants, and stores selling groceries, liquor, appliances, and household goods. As night falls, the dance halls fill up with people ready to shrug off the fatigue of the hard workweek.

On most summer days, the sun beats down relentlessly from the clear blue sky onto open fields that are a long way from the sparse shade of distant tree lines. Other afternoons, the sky is mottled and gray with storm clouds, their dark bellies full of impending rain that will fall not here but farther east, along the coast.

The Grants settle here in rural Halifax County to farm under a program that originated as part of President Franklin D. Roosevelt’s New Deal in 1935: the Tillery Farms Resettlement project. It’s a bold experiment that gives tenant-farmer and wage-worker families a chance to own their own land.

Gary’s father, Matthew Grant, stands more than six feet tall, a sturdy man who has been working at the Newport News Shipbuilding and Dry Dock Company. But he and his wife, Florenza Moore Grant, long for a life outside the city. “They were just free spirits,” Gary recalls. “They did not like being confined. My father was the youngest of nine children, and they were industrious people. My sister describes my father as a dreamer and my mother as a person who helped to make dreams come true.”

Matthew comes from a landowning family in Potecasi, in Northampton County. Florenza is descended from sharecroppers near Rich Square in the same county. They married right out of high school. They are both proud, independent-minded, and self-confident — a spirit they instill in their children. Florenza, who dresses well and projects great dignity, instructs her daughters that just because they live on a farm, they don’t have to look like they’re working on a farm. When they go into the fields to pick cotton in October, they wear their Sunday gloves to protect their fingers from sharp cotton spurs.

The two parents work as a team, in both family and business matters. “I think that my parents probably had the best partnership,” Gary remembers. “They trusted each other — that was the first thing.”

The Resettlement Administration (RA), which evolves into the Farm Security Administration (FSA), eventually extends credit to 800,000 farming families — nearly 160,000 of them black. It also purchases millions of acres of farmland and establishes about 60 planned agricultural communities. Tillery is one of just 13 such projects reserved for black farmers.

The goal of the RA is for blacks to compose 10 percent of its homesteaders — the percentage of blacks in the farming population. Not only will this improve their economic prospects and make them self-sufficient, but it will also stabilize the larger agricultural economy that collapsed during the Depression — a time when prices dropped, production fell, and banks foreclosed on many farms or simply refused credit for seed and other essentials.

Originally, Tillery contains a community of white farmers as well. But in 1940, when the 10,000 acres along the Roanoke River flood, the federal government moves the whites to an 8,000-acre tract of higher ground west of Halifax. When the fields drain, they are sold on credit to black families in parcels of 40 to 60 acres. But the lucrative tobacco allotments remain with the white farmers. The black farmers are instructed to grow cotton, soybeans, corn, and peanuts.

Large equipment like pea-pickers are collectively owned. The federal government loans money for equipment and operating costs. After a five-year trial tenancy, the FSA lends $3,000 to $5,000 to farmers at 3 percent interest to buy the land and buildings.

For white families, three house types are available: two-story, two-over-two; one-story, three-bedroom; and A-frame. Black farmers have two choices of one-story home — though some move into two-story homes vacated by whites gone to the Halifax tract. The houses are built of plain wood-frame shiplap, set on sturdy block foundations. A typical farmstead includes a house, a smokehouse, an outdoor privy, a barn, and a chicken coop. The Grants tend Units 50 and 51 — 60 acres, including a garden and an orchard. Their two-bedroom house initially has no electricity. “My mother and father had a bedroom, and five children slept in one bedroom for the first few years,” Gary recalls. “Our heater that first winter was a brooder — that’s a heater that keeps baby chicks warm.”

Tenants are selected for projects like Tillery through interviews and physical examinations to determine if they are reliable and healthy enough to work the land. They must be family units — a husband and wife, usually with children.

Indeed, there are many children in Tillery. So many that they fill Tillery Chapel Rosenwald Elementary School — one of 46 Rosenwald Schools in Halifax County, and more than 800 in the state, built through a partnership established by Booker T. Washington and Julius Rosenwald, president of Sears, Roebuck and Company, to improve rural education in black communities.

The children work the fields alongside their parents and grandparents, and they roam outdoors, playing baseball and dodgeball, rolling tires down dirt roads, walking on stilts made from tin cans and baling wire. “It was a wonderful place to grow up,” Gary remembers. During harvest season, the kids would stay out of school two or three days a week to work the fields. “We worked,” he says. “They somehow made it fun for us.” 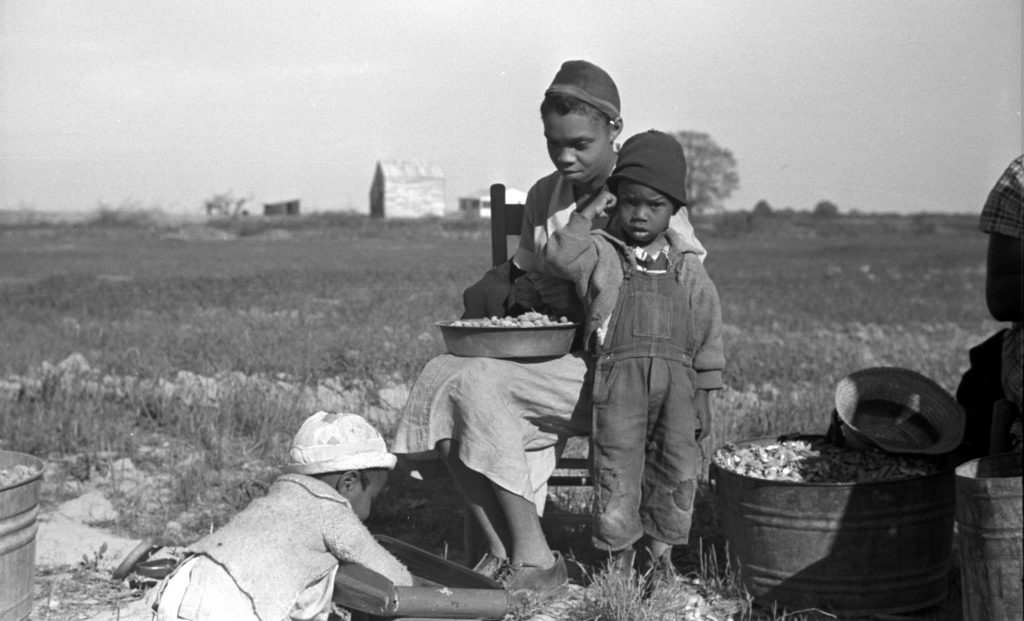 In 1938, Tillery children learned firsthand that farm life wasn’t easy. Many took the lessons learned in the field, at their mother’s knee, on to higher education. photograph by Library of Congress

Every road in the Tillery settlement is home to dozens of children. “You were so tired when you got out of the field,” Gary says, “but you could always go down the road to the neighbor’s house and have energy enough to continue to play.”

The Tillery kids aspire to become doctors, lawyers, scientists, and, like Gary, teachers. “Dreams of things that we had never even dreamed we could become,” Gary says.

When Gary accidentally demolishes a pasture fence with the family tractor, his father tells him, “Son, you’d better get yourself some education, or you’re going to starve to death.” Gary’s not cut out for sports or mechanical work — his brothers grow taller and stronger. But he loves school.

Of the hundreds of kids who grow up in Tillery, the overwhelming majority earn their high school diplomas, and more than half go on to graduate from college. “The settlement didn’t require that you go to school,” Gary says. “They would have been perfectly happy for us to stay home and work and remain ignorant. It was the parents who understood that you needed the education in order to advance.”

Tillery brings together a critical mass of black families like the Grants — independent, determined, self-willed — who are property owners. The result is a community that takes charge of its own future. They demand better schools and the right to vote.

As in so many areas of civic life in Tillery, Florenza Grant leads the way. When she attempts to register to vote, the registrar requires her to read the Constitution — an illegal literacy test. Meanwhile, a young white woman is signed up without any test. When Florenza objects, the registrar tells her that the white woman is covered by the “grandfather clause” because her grandfather was white. “My mother said, ‘Well, my grandfather was white. Give me the Constitution,’ and she read the Constitution to him, and that was the day that she registered,” Gary says.

Florenza becomes the first black woman in Tillery to register to vote.

But segregation is still very much in force, and black farmers learn to be wary of the white brokers who buy their crops at the Tillery market. “If peanuts were selling for 10.9 cents a pound, the owner-manager would tell the black farmer, ‘Well that .9 is nothing; you don’t need to worry about that,’” Gary explains. “So you think about losing nine-tenths of a cent per pound on 3,000 pounds of peanuts and how much money you lost,” Gary says. “Once we figured that out and got the .9, then they put in the grading system — different for the peanuts being grown by blacks and those grown on the farms owned by whites.”

One fight at a time, the black landowners of Tillery take charge of their world, insisting on being treated fairly and with respect. They support one another, find strength in solidarity.

Tillery becomes more than just a farming community: It’s an engine of transformation.

Owning their own land gives the black residents of Tillery a power that the sharecroppers don’t possess. When the neighboring sharecroppers work for wages on Tillery farms, “they began to be treated like real human beings,” Gary says. So the Tillery effect reaches far beyond the resettlement project.

Gary witnesses the difference that land ownership makes in being treated with respect. “It was transformative, no doubt about it,” he says. “The resettlers were not fearful, because they were working for themselves. So the local stores could not cut their credit off. They could not put them out of their homes. Racism was still very rampant and evident, but you were working to buy your own place, and that made a difference.”

All told, more than 200 black families eventually own farms in Tillery — a generational wealth and heritage that will be passed on to the children and grandchildren who will one day raise their families here. Many of the farmsteads sprout small cemeteries where the older generations remain on the land they worked — land that their descendants now own.