I came up with the idea on a family trip to Blowing Rock, where a billboard for a craft show caught my eye. Emblazoned on the sign was a wooden snowman. His body was made of three carved wooden balls. A tiny hat capped his head. He grinned with a snaggle-toothed grin composed of tiny chunks of coal.

I’m typically unaffected by the darling and the cuddly, but something about that snowman struck me. The wooden spheres that made up the body seemed pleasingly elemental. The buttons, the twiggy arms, and the faux carrot nose all looked like they had come off a spare-parts Mr. Potato Head. It made me want to hum “Frosty the Snowman” and heat up some apple cider. I suspect my reaction had much to do with my kids, asleep in the back seat, and our family’s crazily enthusiastic embrace of the holidays. I pulled over to the side of the road and rolled down the window. Julie looked at me quizzically, but I waved her off and snapped a photo of the billboard.

“I could do that,” I said to myself as I pulled back onto the highway. “I could make a couple of those.”

And so it began.

When it comes to arts and crafts, my reach often exceeds my grasp. Our basement is an island of misfit projects, littered with half-finished — OK, one-quarter-finished — attempts at making bookshelves or fishing rods or camp stools.

But I was convinced that my snowman project would be different. Three little blocks of wood and some doll parts. How difficult could it be? The snowman on the billboard was clearly made on a wood lathe, turned perfectly round and blemish-free. That seemed like cheating. My kids deserved better. I was pretty handy with a knife. I was going to hand-carve my snowmen. I spent the first of several stupid amounts of money on a chunk of exotic wood from a lumber distributor in Oregon. Took me five days of Google research to make up my mind.

You see where this is going. 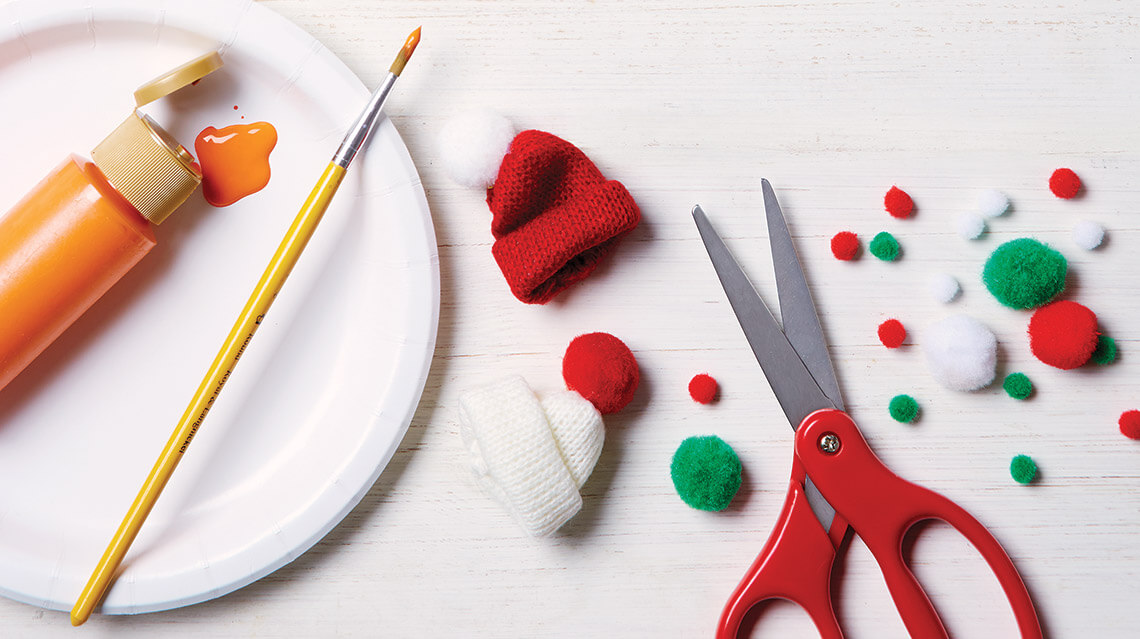 Sometimes, the best-laid plans of a dad in Raleigh work out after all — even if they start to look chaotic around the three-year mark. photograph by Matt Hulsman

When the raw wood arrived, I took it to a neighbor who owns a fancy band saw and had him cut the wood into pieces that would correspond to the tripartite head, thorax, and abdomen of two scale-model snowmen. Now I had six pieces of wood of three different sizes to work on. Dang, I thought. This was getting complicated.

When I sat down to carve the snowmen, the wood was too hard to whittle. No sweat, I figured. I have buddies who carve duck decoys using nothing but a hatchet. I tried that. Nearly cut my leg off.

Ultimately — and we will discuss the total project time in a moment — I had to call for reinforcements. My pal Mark Jones, an architect, has a basement woodworking shop that would turn Santa’s elves green with envy. There are miter saws, drill presses, routers — all set up in a circuit, like a weight-training room. My thinking was that Mark would take me under his wing, and for an hour or two we would toil side by side as mentor and mentee. Nothing doing. No way he was letting me near his fancy lathe. I’d purchased a bag of small fake pieces of coal (oh, the things you can find on Etsy …) that weren’t quite small enough for a 12-inch-tall snowman’s eyes, so I sat by myself and shaved them down with a utility knife while Mark worked the big machines. I felt like a water boy at the big game.

I ordered tiny fake carrots, but they weren’t really orange. Who wants a snowman with a blah nose?

And on and on it went as I descended into arts and crafts hell. I ordered tiny fake carrots through Etsy, but they weren’t really orange. Who wants a snowman with a blah nose? I trekked back to the craft store for a small jar of bright orange paint. Perfect.

I was obsessed with the details. I tried three kinds of varnish. I couldn’t find a prefab tiny top hat, so I ordered four Christmas dolls (more Etsy) and cut their hats off with kitchen shears. On one of my 397 trips to the craft store, I found snowman-shaped Christmas tree ornaments adorned with perfectly sized holiday scarves. I snapped them up, along with a box of 250 craft buttons and some fake snow fabric. I was getting there.

Now I’ll tell you how long this went on: I bought those first blocks of wood when the kids were about 11 and 8 years old. When I finally finished the project, Markie was in graduate school and Jack was halfway through college. Most of my effort came during a herculean rush over the final two months, but still. I lived with that project for more than a decade.

I’m not sure why I was so obsessed, so devoted to making those wooden snowmen. No one knew what I was up to. No one would have been the wiser had I walked away from the uncompleted and disarticulated Frostys in the basement.

On the one hand, the reward came in the looks on Markie’s and Jack’s faces when they saw the snowmen, and it dawned on them that they were looking at those old wooden blocks that had been beside the laundry table for nearly half their lives. But the deeper rewards will come later, when they pull those snowmen from some storage box in the future and recall how our family loved Christmas so deeply, and remember how their dad always went overboard during the holidays, in one way or another.

My two Frostys the snowmen were a fairy tale for a long time, I’ll admit. But they are jolly happy wooden souls this time of year.

And while they might not be made of snow,

At least now my children know

How they came to life over about 10 years of anguish and $4,367 dropped at Etsy.