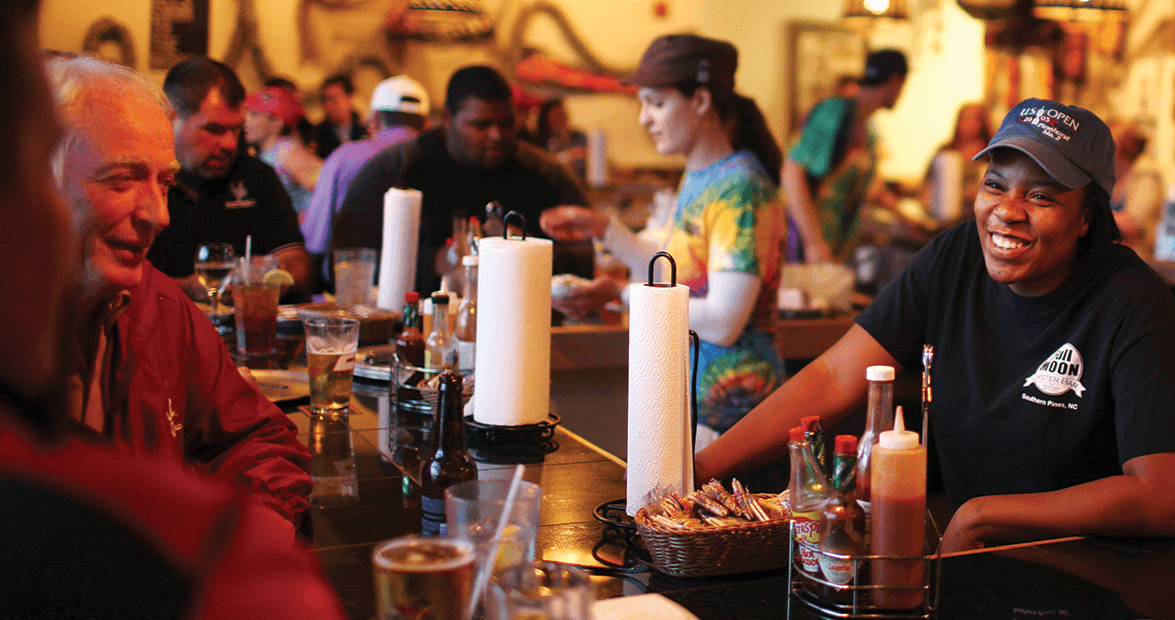 An oyster bar is a cooperative place. Shuckers work quickly and expertly. They start the work that diners finish by preparing each oyster just so, with hot sauce or horseradish or cocktail sauce and lemon — or nothing at all, since there’s nothing quite like a fresh, briny oyster — then sliding them out of barnacled shells, carefully, so as not to lose the oyster liquor. At Full Moon oyster bars, in Clemmons and Southern Pines, the concept goes beyond the usual shucker-diner relationship. “All my friends come to eat with me every night,” says Randy Russell, president of Full Moon. He means both newcomers and “mooners” — longtime, loyal customers. But even new diners are soon initiated into the fellowship of Full Moon — they’re drawn by dishes like shrimp and grits, plus some unexpected fare, like crawfish alligator cheesecake, inspired by Russell’s wife’s New Orleans upbringing. And, as if the food weren’t enough, the dining room makes quick converts of new mooners: Everyone sits around a large bar, so “you meet half the people in the restaurant because they’re sitting next to you,” Russell says.

Russell and several of his friends came up with the idea over beers one night. Russell drew up some plans on a napkin, and “the next thing I knew,” he says, “we had a restaurant. We thought of the name, and what we could do with the concept. We started laughing and having fun with it, and it just stuck.” They opened Full Moon in Clemmons 11 years ago, expanded to Southern Pines last year, and have plans to open Jamestown and Morrisville locations within the year. On a busy Wednesday night at the Clemmons location, people come and go beneath a sign bearing Full Moon’s motto: “Come as a stranger, leave as a friend.” When a girl celebrating her 16th birthday decides to take on the Quarter Moon Challenge — a raw oyster on a saltine with jalapeño, horseradish, black pepper, and hot sauce — everyone around her cheers her on. She eats six to win a tie-dye T-shirt, and when she finishes, the applause rings out from all corners of the bar.