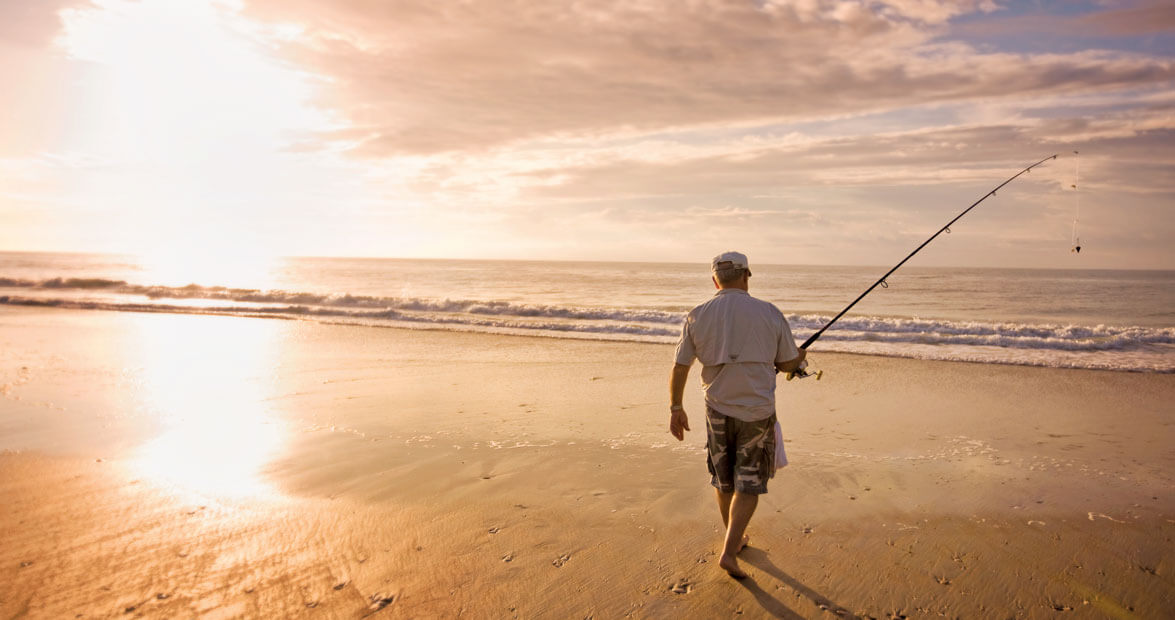 Standing in the surf, with the rod in my right hand, the fishing line tucked into the crook of my index finger, I can feel the breath and pulse of the sea. The line disappears just beyond the breakers, a gossamer thread connecting me to hook and bait and sinker. Each wave that rolls over the line pulls it in a steady tug, and as the wave passes, the line twitches with the release of the water’s weight. It’s a twitch that is fish-like, but I know it’s not indicative of a fish. So I stand there, feeling the pull of the tide and the yearning of the ocean in the crook of a single finger.

Stand there long enough, and I begin to sink as the water reduces the friction that binds each grain of sand to its neighbor. I sink to my ankles, and then to my shins, and I love this feeling of sinking into the beach. At places along the North Carolina coast, the sand and sediment deposits are 10,000 feet deep, a wedge of eroded gneiss and schist and clay and slate that holds the state’s geological DNA. Quartz and feldspar glitter at my feet. A wink of mica could be from the ancient cliffs of Grandfather Mountain. Remains of Hanging Rock could be there, or the Uwharries. Standing on the beach, I am awash in sand from the Cape Fear and Roanoke and Neuse.

I tend to get a little lost in thought out there, and often there comes a moment when I lose track of where I am, exactly. Of whether I am standing on land or in the sea. It’s this feeling that I love about surf fishing, almost as much as I love to catch fish.

Redfish, bluefish, black drum, whiting. Speckled trout, croaker, mullet, flounder. These are the denizens of the near-shore waters, these and their less-appealing kin: the skates and rays and toadfish and puffers. The beaches along the Outer Banks are just about anyone’s pick for a few days of slinging shrimp and heavy metal, but my favorite are the beaches of South Core Banks, where the uninhabited isles of Cape Lookout National Seashore end in the famous “hook” of Cape Lookout point. 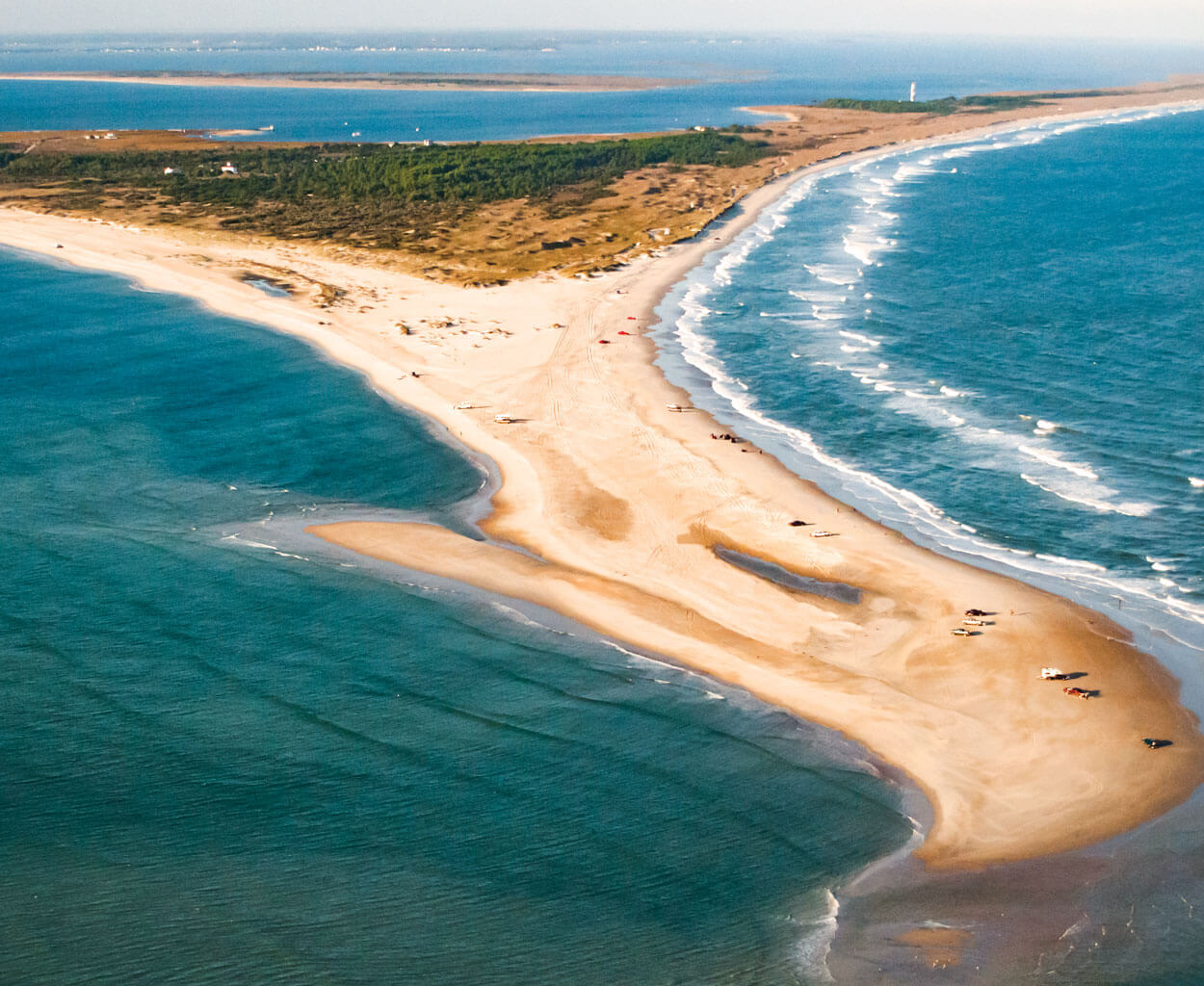 At the southern end of South Core Banks — aka surf angler’s paradise — the “hook” of Cape Lookout point sweeps into the Atlantic. photograph by Jared Lloyd

Many times I’ve roamed the South Core Banks beaches via sea kayak, four-wheel-drive truck, and good ol’ Pat and Charlie, searching the breakers for likely looking spots. The beach-towel crowd might think we surf anglers just take our chances, relying on luck to find a fish in all that endless ocean. But a dedicated surf angler reads the surface of the sea like Braille. We look for waves that break in a white froth over offshore sandbars, then disappear over deep, dark waters. Those are sloughs, troughs that run parallel to the beach. A slough can be a hidden highway for fish that feed on minnows and sandworms hanging out in its relatively calm depths. I’ve caught redfish, flounder, and speckled trout from sloughs. Spanish mackerel might take a quick detour through a slough.

We read the beach, looking for features that beachcombers might not recognize. Currents ripping parallel to the beach could be draining an unseen depression, and this moving water is like a conveyor belt of bait to hungry fish. When wave action scallops out a point that juts deep into the surf, we’ll probe the water on the far side of the point. When there’s no obvious feature, we’ll cast just under the breakers, where the churn of the waves kicks up crabs and baitfish caught in the confusing water.

We’ll cast, and we’ll stand there. Sinking in sand. Waiting for just the right sort of twitch. Lost in wind and waves and thought. Happy as clams.

When my kids were little, they loved to fish in front of our rental cottage on Emerald Isle. I’d thread bits of shrimp on shiny hooks, help them hurl the rigs into the waves, and run from child to squealing child, rebaiting hooks, picking off seaweed, and unhooking wiggling spot, croaker, whiting, and the occasional dogfish — the dreaded sand shark! — that called for needle-nose pliers and a firm grip. We made a deal: If they could catch it, I would clean and cook it, as long as the fish were of legal length. We had many a meal — many an appetizer, to be honest — of battered-and-fried fish slivers just a couple inches long.

I may hunt bigger fish on wilder beaches these days, but the basic process remains unchanged: Find a fishy-looking slough and make my stand, wondering whether I’d sink all the way to China if I never stepped out of my sand hole, thinking about how so much time has passed since the last time I fried little bits of a little kid’s fish, and attempting to discern the difference between a tap on the line and a jerk and a shudder that could be a flounder slurping in the bait. If you don’t surf-fish, you might look at our solitary figures on the beach and think you’d pure-T die of boredom holding up that stupid fishing pole. But that’s not how we see things, standing there with glittery bits of mountains, Piedmont, and Coastal Plain under our feet. All of North Carolina gives way to the sea, somewhere out there where a thin line vanishes in the waves, and every moment could be the moment: A twitch. A tug. The fish we’ve been waiting for.