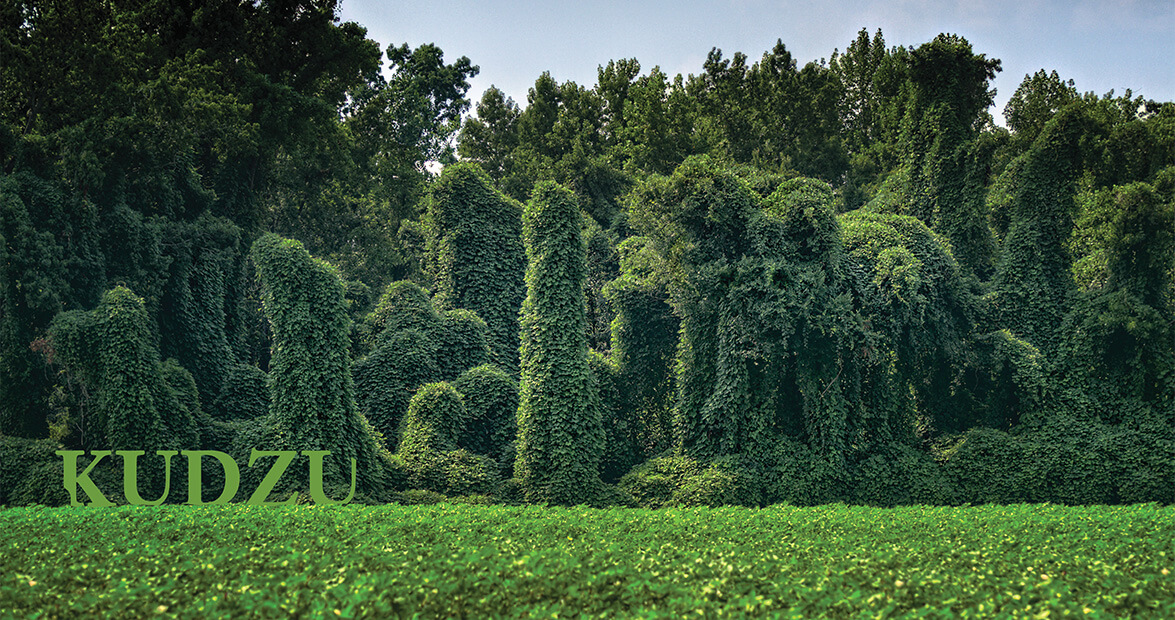 Amos McLamb can hardly say the word without spitting. “Kudzu?” he says. “Kudzu?!” It’s almost like an oath. “I’ve got a story for you about kudzu.”

A tree and cattle farmer from down in the bottom corner of Sampson County, a place of loamy sand, cypress swamps, and tar-paper tobacco barns, where some nights you can still hear bobcats screeching from the woods, McLamb has long been at war with the vine that ate the South. He knows it’s a war he’ll never quite win. Most recently, he tells me, the kudzu invaded a tract of his longleaf pines. “I set these pines out awhile ago,” he says, “and years passed and I just mowed the kudzu or did whatever, you know, to keep it at bay.” And for a while that worked. But then the kudzu started growing, getting bigger, and last summer it strangled 10 acres of pines. “Just climbed right over top of them and killed them,” McLamb says.

So he hired a neighbor to come over with a root rake and a bulldozer, and they combed the kudzu into windrows, and then piled the rows into mounds 12 feet high. Two months later, McLamb came back with pitchfork and a drip torch to burn it all. “And I said, ‘Well, I’ll just dig into it and see how dry it is.’” He sank his pitchfork into a pile and drew out fresh leaves. “Green as a gourd,” he says. “Had not dried one bit.”

So the neighbor came back, this time with a dump truck and a track hoe. And they picked up the whole tangle of leaves and vines and roots and dirt and threw it into the swamp. “I don’t like kudzu,” McLamb says. “It’s a mean, awful, terrible, hateful plant.”

I grew up spending summers a mile or two down the road from McLamb’s place, working on my grandparents’ tobacco farm with my two cousins, sometimes an uncle, and a couple dozen other local people, many of whom my grandmother would pick up and bring to work every morning, making the rounds through parts of two counties in a faded green Chevrolet pickup. For us, kudzu was always a part of the periphery, knitting the trees into a lush curtain at the edge of the woods while we sweated over the tobacco plants in the field. Occasionally the kudzu would devour a disused outbuilding or an old car left out to rot, but mostly it kept to itself.

Perhaps because I’ve never had to resort to a root rake or a track hoe to fight it off, I’ve always had kind of a contrarian affection for kudzu. It’s plucky and stubborn; it doesn’t stay where it’s put. Something about that reminds me of my family, grandparents and parents and aunts and uncles — hardheaded and hardworking, every one of them. And, McLamb won’t like this, but there’s something about kudzu that reminds me of him, too. Its endearing, enduring recalcitrance, perhaps, or its relentless buoyancy. Or maybe my affection for this indestructible weed is an outgrowth of my attachment to North Carolina, an abiding “vale of humility between two mountains of conceit.”

It’s also just plain lovely to look at. The dinner-plate-size leaves unfolding into forever, the wine-dark flowers, the way kudzu adds architecture to everything it touches — gabled roofs, flying buttresses, and vaulted windows cascading out from junkyards and utility poles and roadside gullies. Before they cut Interstate 40 all the way through to Wilmington, my parents and my sister and I used to take U.S. Highway 29 to U.S. Highway 421 all the way from our hometown in Danville, Virginia, to my grandparents’ house in Harrells, and the drive was one long, loping blur of kudzu and honeysuckle. Always softening what it smothers, kudzu fills in gaps, buries corners, hides the jagged edges.

Some years ago, it started laying claim to the old Dell School in Delway, a handsome brick building at the crossroads of 421 and Magnolia-Lisbon Road. A hundred years ago, my great-grandfather was an elementary student there, riding a horse-drawn buggy between home and school, but the place had long since been shuttered and abandoned. And as the vines closed in, at first framing the windows and doorways and then erasing them, the building increasingly took on a forlorn majesty, until some years ago the kudzu and a leaky roof finally wrestled Dell School to the ground. I miss that old building, and I miss the vines that covered it, too. Like so many things, kudzu is beautiful even as it is destructive.

That’s just one contradiction in a plant that, like the region and the state, is full of them. Another is this: kudzu is both an emblem of the South and an alien exotic. In fact it is perhaps the country’s most well-known invasive species. Before Asian carp began ambling their way toward the Great Lakes, and even while nutria were beginning to multiply in Louisiana’s bayous, kudzu was devouring North Carolina.

A member of the pea family sometimes called Japanese arrowroot, it first arrived in the United States in 1876, as part of the Japanese pavilion at the Philadelphia Centennial Exposition. After that, it became popular as an ornamental shade plant. By the early 1900s, Southerners were buying kudzu through mail-order catalogs and planting seedlings by the thousands around their porches and arbors.

In the mid-1930s, partly at the urging of C.E. Pleas, a Quaker farmer and kudzu evangelist who was growing acres of it in the Florida Panhandle, bailing it into hay, and feeding it to his livestock, the national Soil Conservation Service began recommending kudzu as an ideal ground cover to control topsoil erosion. Its long roots were impervious to drought. Its temperament was well suited to heat and humidity and boundless sunshine. Its flowers even smelled sweet. And experiments revealed that it would also replenish nitrogen-rich nutrients to land worn out by generations of cotton, tobacco, and corn.

And so, for a few fleeting decades, kudzu was hailed as a savior. Even then, though — and even as Civilian Conservation Corps workers fanned out across the South, planting kudzu along every highway and across every clearing and gulch — some farmers looked at how fast the vine grew, as much as a foot every day, and called it a weed.

It didn’t matter, though. By 1945, kudzu blanketed 500,000 acres of the Southeast. Twenty years later, it had gone from miracle to menace, and in 1970 it was officially declared a pest. But by then it was a fixture of the landscape, established and expanding. Today, it covers an estimated 10 million acres from West Virginia to Texas.

This whole history sounds familiar to my grandmother, who’s seen a few exotic species arrive and run amok over the years in Sampson County. If you have a few minutes, for instance, she will tell you about the beavers relocated to North Carolina’s Sandhills from Pennsylvania in the 1930s and ’50s, and how they durn near took over the whole eastern part of the state, damming up Black River — “the river is full of them,” she admonishes — and filling ponds with logs until the water overflowed and flooded nearby fields. For the past 20 years or so, our family has had an ongoing quarrel with a colony of beavers that took up residence in a pond on the farm that we now refer to as “the beaver pond.” (Even so, we’re not yet ready to concede defeat.)

My grandmother remembers her grandfather as an agricultural experimenter himself. “We called him ‘the inventor,’” she tells me. “A man of very few words. He was always up for trying new scientific methods to improve his farming.” Among them, somewhere along the way, was the introduction of crotalaria, a woody shrub with a pretty yellow flower and an ear-catching nickname: rattlebox. Crotalaria was supposed to enrich the soil. But it turned out to be poisonous to cattle and hard to control. “Well, it was a disaster,” my grandmother says, “but he wasn’t discouraged. He’d try something else. I’m not sure how they got rid of the crotalaria, though.”

No such luck with kudzu. But in recent years, its reputation has seen some repair. In 2009, researchers found that compounds called isoflavones in the kudzu root could help control diabetes by helping to regulate blood pressure, cholesterol, and glucose. Folk herbalists have long claimed kudzu as a remedy for alcoholism and hangovers, and scientists at the University of North Carolina at Chapel Hill have investigated the kudzu compound puerarin as a potential treatment for alcohol problems.

Meanwhile, in Rutherfordton, on the western edge of the state, farmer Edith Edwards, aka the “kudzu queen of North Carolina,” and her family have been cultivating the vine — she doesn’t call it a weed — since the 1970s, when a drought overwhelmed their cows’ forage and, out of necessity, they turned to the kudzu growing wild on their farm. The cows loved it, and after a while Edwards started cooking with kudzu, first hesitantly trying French-fried leaves and later moving on to kudzu quiche, kudzu tea, kudzu syrup, and a jelly made from kudzu blossoms, which the Edwardses sell.

Back home in southwestern Sampson County, kudzu remains an unquestioned curse. “Nothing can match the fury of a spurned kudzu plant,” William Shurtleff writes in The Book of Kudzu, and Amos McLamb believes it. I ask him if he finally managed to chase it away from his long-suffering longleaf pines. He gives me a look. “No,” he says. “I’ve still got it.” Even after a round of herbicide, tiny kudzu sprouts keep poking up from the ground. And the swamp where he threw the weeds that killed the pines? “There’s kudzu growing around the edge of the swamp, too.”