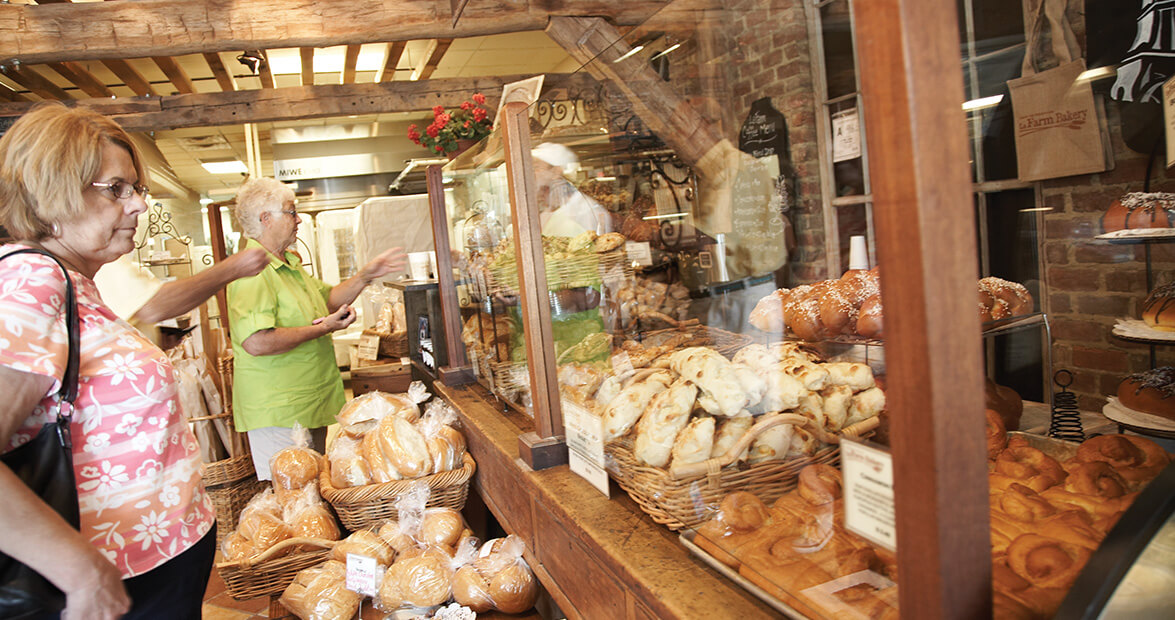 It’s early — far too early to be polite — yet the staff at La Farm Bakery in Cary seems content, even happy, to be at work. They’re skating around a floor that’s lightly coated in flour, using a wooden peel to shovel loaves of bread into an inferno of an oven.

When Lionel Vatinet, La Farm’s owner, arrives around 6:30 a.m., he extends a series of chipper greetings — “hello,” “bonjour,” “buenos dias” — to his staff, many of whom have been here since midnight.

Everything about the bakery, from the archways and reclaimed brick walls to the wooden beams, patinated mirrors, and wall sconces filled with bouquets of dried wheat, points to another world — the world Vatinet was raised in, in Paris. You have to look to the drop-tile ceiling to remember that you are, indeed, in a modern American shopping center.

And then there’s the smell.

At La Farm, the aroma of white chocolate baguettes, croissants, and whole wheat boules induces some form of amnesia, much like the cooing face of a newborn is enough to wipe from memory a grueling labor. Could it be that the employees who put in so many hours at La Farm do so because they have the privilege of smelling while they work? Or maybe they’re all like Vatinet: bread people who have been seduced by bread making.

Vatinet recalls the moment he first sank his hands into a silky bowl of flour, yeast, and salt, worked the mixture together with water, and made something that transcends such primitive ingredients and gestures.

When it’s time to shape a batch of dough that’s done proofing — baker-speak for rising — Vatinet takes his place around a wooden table and begins working the dough, initially shiny, sticky, and lumpy, into perfectly smooth ovals. He uses practically no flour, and the seemingly simple, quick gestures make it look too easy.

Vatinet began studying bread making at 16, when he joined France’s prestigious artisans’ guild, Les Compagnons du Devoir. Seven years later, he was one of just a handful to finish the apprenticeship. But rather than keep the hard-won secrets of the guild, he set about promoting them, believing that the benefits of transparency and inclusivity far outweigh the glory of holding, tightfisted, on to a recipe and its methods. Which explains why the staff members at La Farm wear shirts that read, “Parteger le Pain” — share the bread. And why Vatinet’s most recent cookbook, A Passion for Bread: Lessons From a Master Baker, puts these secrets in the hands of anyone willing to read it. But he goes a step further. 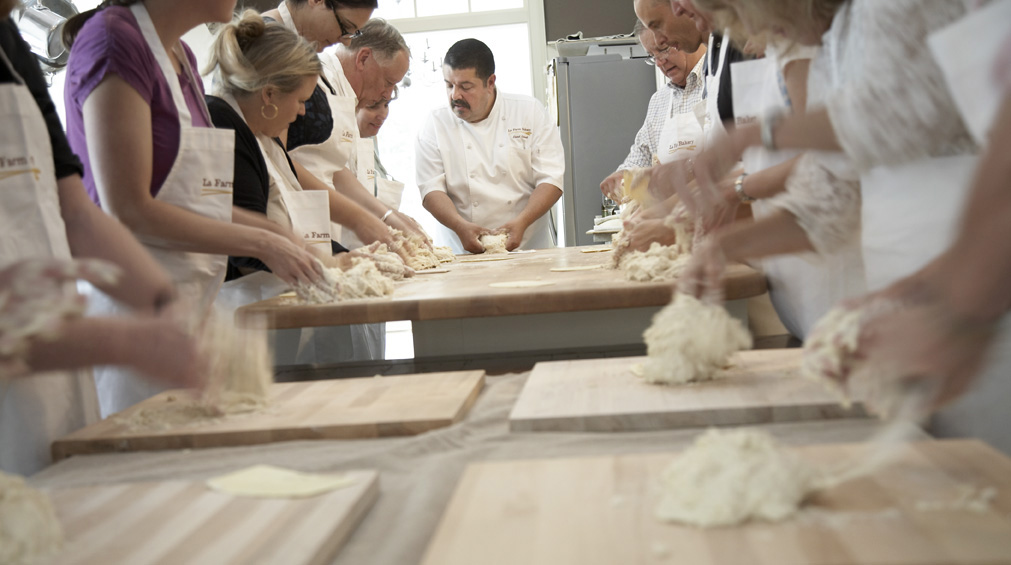 Lionel Vatinet’s home is also his classroom, where, several times a month, he guides curious students in the craft of bread making. photograph by Mark Petko

Since the beginning, Vatinet has offered bread classes, many of which take place at his home just a few minutes away. “I learn more by teaching,” he says. As the founding instructor at the San Francisco Baking Institute, the first of its kind in this country, Vatinet honed his skills as a teacher. He’s taught classes for children and adults, including one called “Tarts Gone Wild,” and a two-day sourdough course.

One Saturday earlier this year, offering a platter of macarons and bottles of Perrier, Vatinet taught more than a dozen North Carolinians the art of country French bread. He enjoys teaching not only because he gets to enlighten students on the glory that can be bread making — it’s the method he teaches, not recipes — but also because he gets to practice his comedic skills. Between quips like “I am the Nostradamus of bread making,” and “If you don’t like sticky, don’t make bread,” you learn that bread is far more than the sum of its four basic ingredients.

The world comes to Cary

In many ways, La Farm is Vatinet’s baby. Granted, he and his wife, Missy, have two daughters whom they clearly adore (you cannot speak to Vatinet more than a few minutes before he brings them up), but La Farm was something the couple also created together, with sweat and tears, risks, and unconditional love and support. Vatinet points to his wife’s business savvy as the source of much of La Farm’s success. When asked why they chose to open La Farm in Cary in 1999, the couple will tell you that the diversity of the global population residing there (thanks to the Research Triangle Park) was a major factor. If there’s a concentration of people who understand that bread is more than the shelf-stable slices of white stuff ideal for pimento cheese and egg salad, Cary is where you’ll find it. (It should be noted, however, that since Vatinet moved to North Carolina, corn bread has found a special place in his heart.)

But Vatinet isn’t just bringing rustic, whole breads to the Triangle area: He does it with locally sourced flour, and was among the first bakers in the Southeast to do so. A key supplier is Carolina Ground, which Jennifer Lapidus founded in 2012 outside of Asheville. Vatinet’s support, she says, has been central to her small mill’s success.

This mill has allowed Vatinet to bring yet another tradition from his French training to La Farm — working with local farmers in small, boutique batches, harvesting relationships as well as grains. He’s happy to take deliveries for competing bakeries to help them cut their shipping costs.

A decorative sign in Vatinet’s kitchen spells the word “Amore.” Another reads, “Give us this day our daily bread.” It is clear that bread is a part of Vatinet. Watching him deftly save his student’s pathetic messes of goop and turn them into smooth mounds in a matter of seconds, it seems as though his training has permeated the very fibers of his hands.