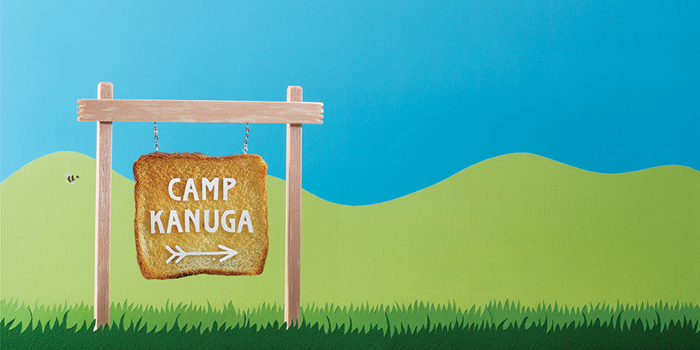 If you’re Episcopalian in North Carolina, the quotation “On this rock I will build my church” may have a double meaning. We know the rock.

The special creation of the Kanuga Conference Center, which has been affiliated with the Episcopal church since 1928, the toast is always on the breakfast table during church camp. For Episcopalians all over the Southeast, that yearly slice of Kanuga Toast is as much a part of the church year as lilies at Easter.

It’s baked so hard, it shatters if you try to hold it in your hand to butter it. It’s so dry, you have to trowel it with jam to swallow it. Personally, I dig through the baskets of jam hoping for the real score: a little packet of marmalade. The bitterness of the orange peel and the austerity of the toast make me feel better about the four slices of bacon on my plate.

The crazy thing is, the truth is even better. Kanuga Toast has been shipped to family members serving overseas.

“They say it gets there just the way it left here,” says Barry Phillips, who runs the Kanuga dining hall. “Perfectly crispy.”

Never let it be said that Episcopalians don’t take bread-breaking seriously. There are Kanuga Toast T-shirts in the gift shop.

The fame of Kanuga Toast has spread so far that when Phillips goes to gatherings of food service directors, people will ask: “Don’t you guys make some kind of dry toast?”

Phillips accepts it with pride. Kanuga Toast has history.  It started in the late 1980s with former Kanuga president Albert Gooch.

Apparently, Gooch loved things that were crispy, and he wasn’t happy with the way the kitchen made toast. With up to three church groups in the dining hall every morning, the cooks didn’t have enough toasters to keep up, so they made big trays in advance. But it got stale too fast.

Someone came up with the idea of baking the toast until it was completely dry. It sounds weird, but it’s tasty. Besides the satisfying crunch, the flavor is like the essence of white bread.

Phillips is happy to share the recipe, although he warns it won’t do any good: “You can’t make it at home. You’ll burn it.”

Kanuga employees line big sheet pans with slices of white bread and brush them with margarine. Butter burns too easily. The sheet pans go into a pizza oven at 500 degrees for 15 to 20 minutes, until the bread is lightly brown. Then they move the pans to a heated holding box to continue drying.

The test, Phillips says, is “if you drop it on the floor and it shatters, it’s done.”

Like all traditions, this one is changing. Overall bread consumption has gone down. Kanuga used to make 500 slices a day during the summer busy season, but it now makes about half that. The camp’s also added toasters, for people who insist on whole wheat. (Heretics.)

Phillips vows to protect the toast, though.

“I love to smell it in the oven,” he says. “Bacon and Kanuga Toast.”

Kathleen Purvis is the food editor of The Charlotte Observer. Find more of her archived stories here.