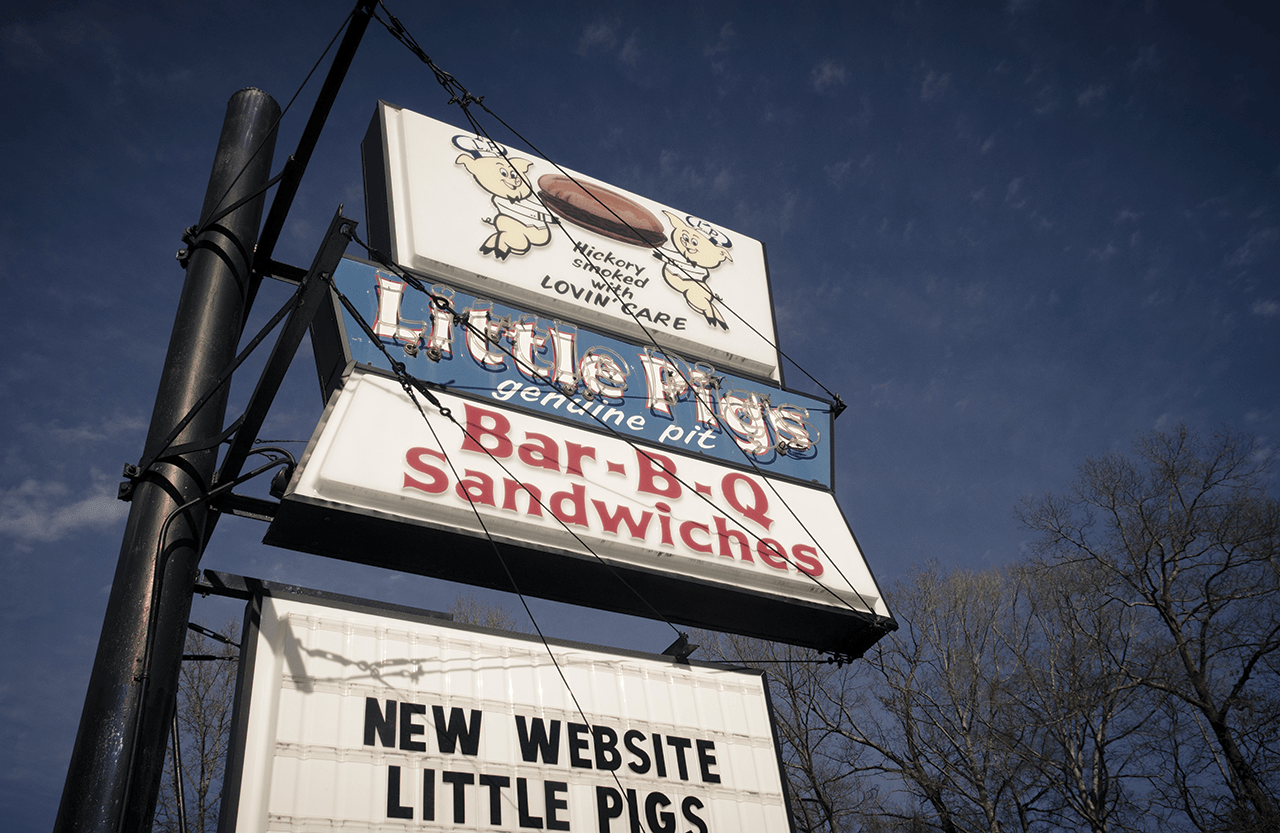 Joe and Peggy Swicegood have been married for 56 years and dated for three years before that, so Peggy knows that if she wants to brag on Joe, she has to wait for him to leave. He will. A woman in a sweatshirt walks into the back dining room, and Joe, who’s 86, pops up and starts talking to her.

“Sit right here,” he says, pointing to a chair next to the fireplace. “Put your back to it so you can get warm.”

“I get warm just looking at it,” the woman says.

Peggy learned early on that it’s probably better if Joe wanders around Little Pigs BBQ in Asheville, the restaurant he started 50 years ago. She used to get upset during the lunchtime rush, when she’d be working as quickly as she could while Joe walked around, schmoozing with the people in line. But over time, as people kept walking in, asking Where’s Joe?, she realized that out there, in line, was where he was meant to be.

“What year’s that menu from?” someone asks, pointing to a hand-painted sign where a regular barbecue sandwich sells for 45 cents.

“Joe’s tough as pine knots,” Peggy says, out of Joe’s earshot. You might not know it now, but at one time he was four or five inches taller than he is now. He weighed 220 pounds when Peggy met him, and he wasn’t a natural athlete but worked at it and ended up playing football at UNC and in the Army. He could hit. Hard. Peggy got a call a few weeks ago from a guy who’d played ball against him decades ago.

“Your husband knocked my teeth out,” he said.

“I hope not recently,” Peggy told him.

When Joe gets back to the table, Peggy stops bragging on him, and Joe starts telling the story about how his parents made him and his five brothers and sisters work for everything they had. He didn’t get an allowance. He made money from his paper route.

Once he grew up, he worked for Southern Bell, a job he couldn’t stand even though the pay was good. He wanted to work for himself. So he convinced his wife that quitting something steady to start up a restaurant was a good idea. She worried. They had three kids at home. But they saw an ad in the paper for an opportunity to start up a barbecue franchise, and went uptown to listen to a man from Memphis tell them how to do it. 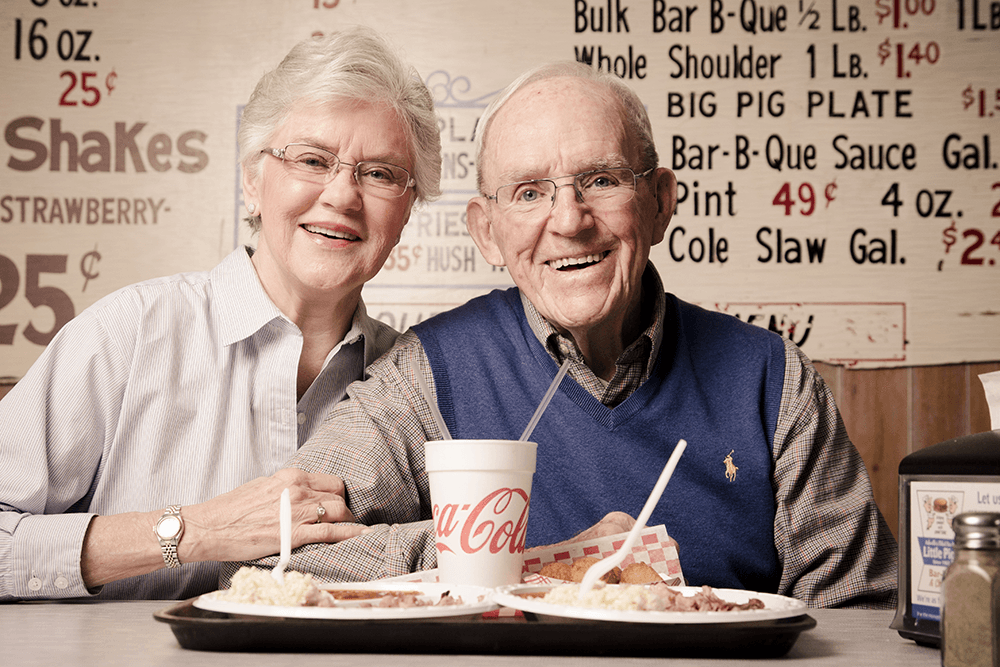 Hence, Little Pigs BBQ was actually just one of more than a hundred Little Pigs Barbecue of America franchises. “Those guys were good business guys but they didn’t know food,” Joe says. Back in the ’60s, the concept of fast food was just coming into its own. McDonald’s got its start in the ’40s as a barbecue restaurant, but switched over to burgers because the slow process of making barbecue was hard to replicate on a national scale. Little Pigs Barbecue of America only turned a profit for one year, 1963, and by 1967, the franchise was bankrupt. Barbecue was too hard to homogenize.

But Joe kept his restaurant open. He started doing things his own way. He’d already been offering barbecue sandwiches at a buy-one-get-one-free deal, and the line was out the door on the first day. If customers couldn’t make it to Little Pigs, Joe would bring his food to them.

Joe’s not one who finds the process magical. “Barbecue’s hard to screw up,” he says, “and so as long as the food’s good, the slaw is tasty, the place is clean, and the people are treated right, they’ll come back.”

“See how clean it is?” he says. “That’s really important.”

Then he points out the wall of people, celebrities from another era, complete with autographs. Football player “Mean Joe” Greene. Baseball players Bobby Richardson and Dave Bristol.

Up front, behind the counter, are the big ovens where they used to cook the meat. Now there’s a gas flame in there, and they just use it to keep the chicken warm.

“Let me get you some chicken,” Joe says.

“Well, here,” he says, “let me hold it all.” He grabs my notebook and shoves a fried drumstick into my hand.

“Let me get you some lemon pie,” Joe says after we sit down. “Only pie we sell,” he says, and he springs up to get it. Peggy leans in again and starts talking about him. “He doesn’t like to shake hands. It’s the germs,” she says.

Joe comes back with a piece of pie, then wanders off to start talking to the lunch crowd. He bumps fists with a guy in line at the register. He says hello to men in suits, guys with short haircuts and tattoos, women in jeans, and workers in denim shirts and ball caps. For 50 years, they’ve found Little Pigs BBQ, and as long as Joe is here, he will find them.