There’s always room on my plate for a burger. Invite me over for a cookout, and I’ll find a way to build my plate around one, balancing it on a hummock of potato salad, buffering it from some saucy side with a wall of pasta salad, maybe even eating it in the buffet line. Smashed on a griddle, seared in a skillet, grilled over live coals, stacked, single, cheesed, or bare, a burger never fails to satisfy. And that includes — burger purists, brace yourselves — the quirky, irresistible, little-known-beyond-our-coast shrimpburger.

Yes, I said shrimpburger. The definition of which seems obvious to me (it’s right there in the name shrimpburger) yet open to controversy (it’s shrimp, and that’s not a burger!), so let me paint a picture for you, a portrait of the shrimpburger.

A proper shrimpburger is an exploration of texture and flavor that occurs when a heap of perfectly fried, tender shrimp meets a lightly steamed white bun, a dollop of tartar sauce, a little mound of slaw, and the barest squiggle of ketchup.

The lure of the shrimpburger draws Merritt Wagoner and his kids, Sly, 11, and Jane Gray, 8, from their home in nearby Emerald Isle. photograph by Baxter Miller

This tasty burger is endemic to the Crystal Coast of North Carolina. If we dropped a pin on a map, we’d aim it at Salter Path, where Big Oak Drive-In & BBQ serves 800 shrimpburgers on a busy Saturday. And Big Oak is only one of several restaurants here slinging shrimpburgers; between Big Oak, El’s Drive-In, Captain’s Kitchen, Bogue House Restaurant, and others, summer could see more than 10,000 shrimpburgers devoured in a given week.

“Sounds good,” you might be thinking, in which case you’re wrong. They’re great. You may also find yourself asking, “Shrimpburger? Sounds more like a sandwich,” which puts you in good company. I’ve pondered this question between bites of my favorite version. I’ve polled friends and cooks and chefs and fellow diners. I’ve devoted hours of my life to researching this topic. (To be fair, research does mean eating another shrimpburger, so …) What I’ve found is that settling on an answer is as slippery as trying to catch a shrimp bare-handed.

The burger is a dish that folks like to say is as American as apple pie, but this “American” dish might not be so American. It may have been invented in Hamburg, Germany. But Tulsa, Oklahoma, is also a contender. San Francisco and New York (both the city and towns across the state) have good claims to the invention of the hamburger, as does St. Louis, where, at the 1904 World’s Fair, a newspaperman ate and wrote about the hamburger as we know it today. It makes sense, all this clamoring: Who wouldn’t want to claim one of modern history’s most popular foods as their own?

Let’s leave the origin story to the food historians and look at the burger itself. We can all agree that a burger is a sandwich featuring a patty typically made from ground meat (usually beef, but others are acceptable). The patty is cooked and served on a bun or roll. Sticklers will tell you that a burger served on toast is not a hamburger but a patty melt; others say patty + bread = burger. Traditionally, burgers are topped with cheese and veggies like lettuce, onion, tomato, and pickles, or even chili. Condiments — mayo, mustard, ketchup, aioli, or some secret sauce — provide an extra boost of flavor and moisture. Regional and cultural nuances abound — Minnesota’s Jucy Lucy has cheese inside the burger, California-style burgers are topped with avocado, and Mexico’s hamburguesas come with a slice of ham or hot dog atop the patty. But everyone agrees that, local variations aside, this is what we call a burger. 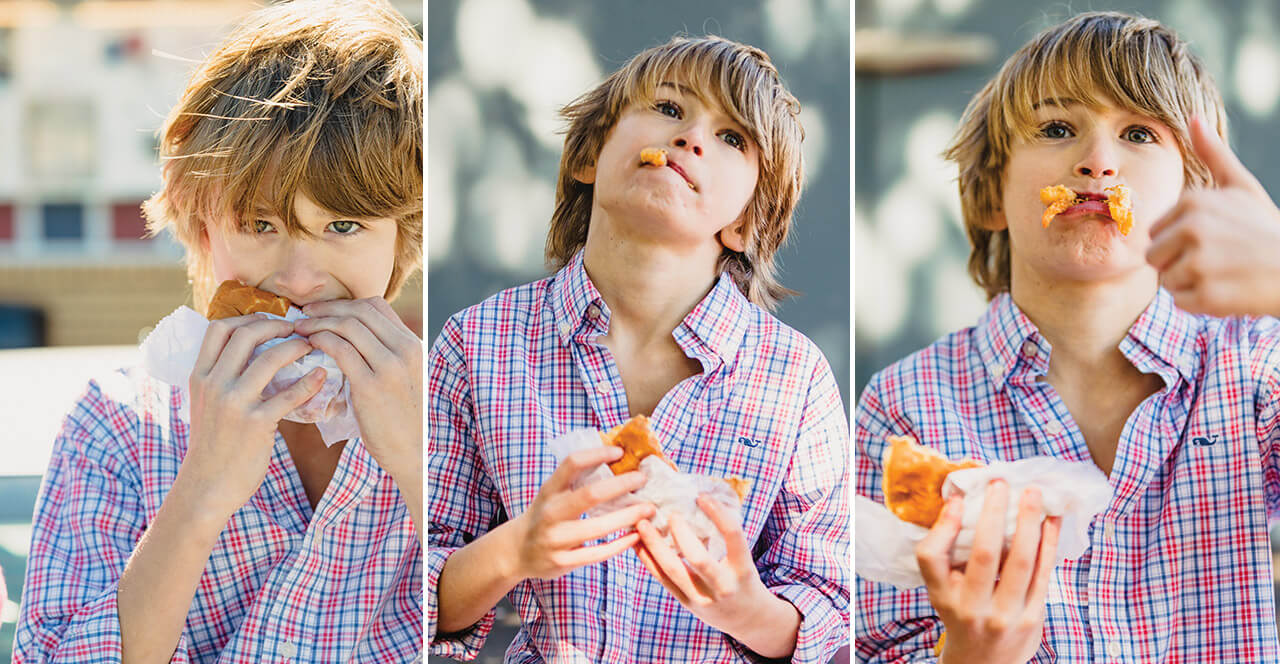 So how’s about that shrimpburger, then?

Given those guidelines, the shrimpburger falls short in one key category: the patty.

Ahhh, the patty. A sticking point here in the Carolinas. In North Carolina, we’ve got the good sense to leave the shrimp whole, cook them whole, and serve them whole, even if it does make for a somewhat unstable eating situation. (Note: Do not try to eat a shrimpburger while driving; you may successfully eat your burger, but finding a shrimp or three that fell between the seats is never a pleasant discovery.) This is not the case farther south.

WATCH: Learn all about the shrimpburger from author Jason Frye.

Typically, when you look up a recipe for shrimpburgers, the South Carolina version is the only one you’ll find. This inferior version from the other Carolina somehow overshadows our superior version, perhaps due to the influence of a popular food city that shares a name with the capital of West Virginia; it was in that city that I first had their version of a shrimpburger. In this mediocre rendition, the shrimp is ground and pattied with green onions, peppers, bread crumbs, and an egg white before hitting the skillet, where it’s fried up like some kind of mutant crab cake.

A. Shrimpburger. Is. Not. A. Crab. Cake. Not that I have anything against a good crab cake, but good crab cakes are few and far between, and they’re most certainly not a model for a shrimpburger.

Damn the patty; the North Carolina shrimpburger — nay, the Crystal Coast shrimpburger — is a burger. Consider this: A burger is craveable. It’s the ultimate comfort food. We all have our favorite versions, and we’ll just as happily eat a burger for a casual lunch as we will save one for a cheat meal or a special occasion — even though a burger is a food we can have anywhere, anytime. This, I argue, is where the shrimpburger meets the burger criterion.

But that patty. Shudder. The Crystal Coast shrimpburger’s status hinges on that shrimpy patty on a bun that they serve to our south; it gives our shrimpburger the edge it needs to fall squarely into the burger box. It casts our shrimpburger, with its delectable pile of loose, golden fried, succulent shrimp, as a regional variation. It just so happens to be the best version.

When we accept the Crystal Coast shrimpburger as a burger, it means we have to broaden our view of the burger, allowing in all sorts of variations. As long as these variations are tasty, I have no beef with them.

In Morehead City, El’s Drive-In serves a classic version of the shrimpburger (minus the tartar sauce). Pull in, and a carhop will take your order. photographs by Baxter Miller

Big Oak’s shrimpburger is a template for all shrimpburgers to come, and if you haven’t tried one, this is where to start (and end) your journey: steamed bun, tartar sauce, slaw, shrimp, ketchup. If you want a little zing, hit it with a dash of hot sauce. Across Bogue Sound, El’s Drive-In forgoes the tartar sauce and gives the slaw a bit more kick with some added mustard, but it’s otherwise unchanged, a classic shrimpburger.

Up the coast a ways at Blue Moon Beach Grill in Nags Head, their cheekily named Shrimp Not a Burger has blackened shrimp and a fried green tomato. Head down to Wilmington, and you’ll find Chicken In The Box’s Ultimate Fried Shrimp Sandwich — fried shrimp, aioli, and pickles on a griddled bun — a delicious play on the shrimpburger despite the burger-free name. Across town at Sealevel City, a vegan diner (yes, you read that right), their shrimpburger uses pressed mung beans as a shrimp stand-in, absolutely nailing the texture and natural sweetness of shrimp, even if the toppings — lettuce, tomato, onion — fall on the traditional burger side.

I’m not native to North Carolina, and when I moved here decades ago, I didn’t know much of our food beyond the barbecue sandwich. For years, I thought, “This is the ultimate North Carolina food, a dish that embodies my new home state.” But after my first bite of a proper shrimpburger, I changed my tune. This is a dish that shouts North Carolina at the top of its gills.

We’re a state rich in symbols, and the shrimpburger is as iconic as any we have. The Wright Flyer adorns our license plates. Our lighthouses are recognized the world over. Tell someone you’re from North Carolina, and they’ll tell you a favorite beach memory. So it should be a food from the coast, a dish unlike anything else, a burger so rooted in this place that a single bite propels you there in an instant.

I give you the Crystal Coast shrimpburger. The bun’s as soft as sand. The tartar sauce is a breeze perfumed with salt spray, and the slaw a cool wave sweeping over your feet. There’s a dune of shrimp as sweet as a day at the beach. The ketchup, a moment of respite in the afternoon shade. It’s a bite of North Carolina, through and through.