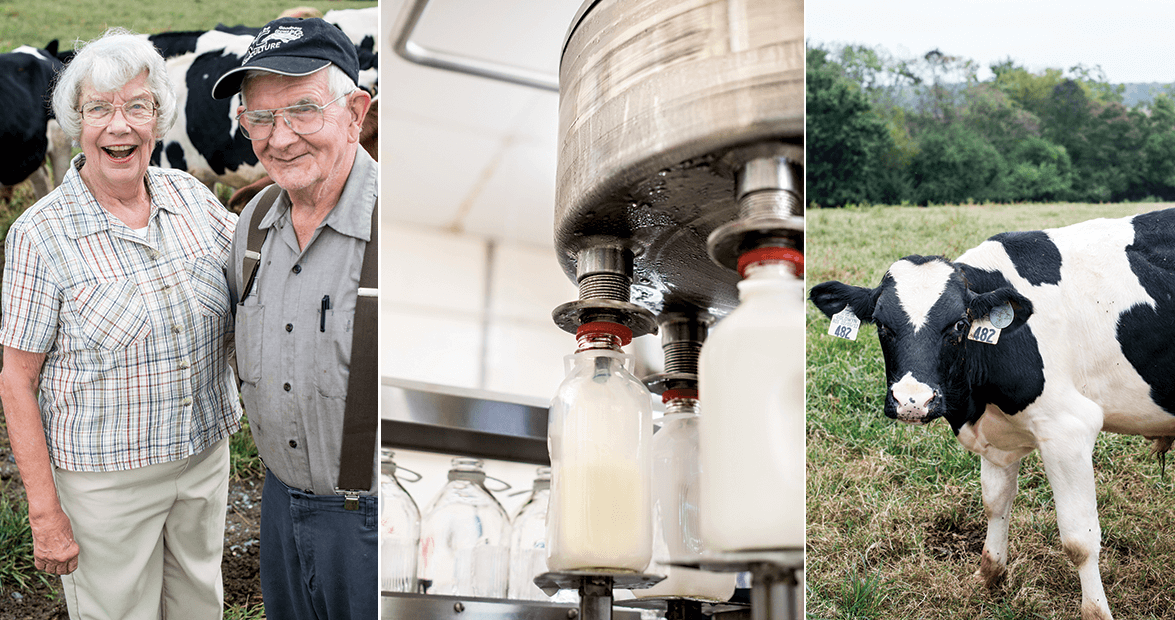 Chris Nutter retrieves a sheet of paper from a table in her Orange County home. “Have you ever seen a cow’s birth certificate?” she asks.

She hands it to her husband, Robert “Bob” Nutter, who stands near their back door wearing rainbow suspenders and a black “Got to Be NC” cap. Framed photos of Holsteins hang on wood-paneled walls behind him. “Nope,” he jokes, studying the form.

At 84, Bob is a fifth-generation dairyman, and he’s seen hundreds of those sheets. A hand-lettered “M” on the top, right corner of the page signifies that the calf in question has deep ties to the Nutters’ farm — not just here on the fringe of Orange County, but also in Maine, where Maple View got its start.

“From two-fifths to one-fourth of our herd is descended from the Maview herd,” Chris says. Maview is the farm’s prefix registered with Holstein Association USA, the largest dairy-breed association in the world. In the dairy business, origin is important.

In the summer of 1963, Bob and his father moved nearly 100 young Maview animals from Maine to North Carolina.

“I got tired of those long, cold winters,” Bob says of his northern upbringing. “When we were up there in ’62, between Christmas and New Year’s it snowed 42 inches. We shoveled snow every day from then until spring.”

That same year, when the weather started to clear, Bob traveled south to deliver some bulls he had sold.

“We got down here and the cows were all out to pasture, and I got home and we still had two feet of snow,” he says. “I told my father, ‘You know, I think we’re crazy to be in the dairy business up here. I think there are better places.’ ”

Surrounded by pines and a handful of maples, the Nutters’ current 400-acre property (187 acres of which the family placed into a conservation easement with the Triangle Land Conservancy) appears to be the Piedmont at its best — especially when seen from the chair-lined porch of the small ice cream shop.

“That’s where we got Maple View from,” Bob says of the name. Of course the farm name predates this location, but Bob’s story seems believable from here. Across the road, black-and-white cows graze on low-lying pastures or take shelter under the sloped roof of an open-stalled barn. Year-round, school groups and families tour the working farm and taste its products: fresh milk, butter, frozen yogurt, and more than 100 flavors of ice cream.

During its first 30-odd years in North Carolina, the dairy sold to a co-op, making milk for labels like Pine State Creamery of Raleigh and Long Meadow Dairy of Durham. But the model eventually proved unprofitable. In 1996, Bob and his business partner began bottling their own milk at Maple View. Bob then brought on his son Roger to help run the milking and bottling operation.

The packing facility is just steps behind the Nutters’ house, and the barn is only a short walk farther. There the milk from 140 cows flows underground from a storage tank and is pasteurized and processed on-site. At this corner of the farm, cows bellow and bottles clink. But Bob, who is mostly retired, keeps an eye on things from the relative quiet of his home.

“The computer right there in the house tells us how much each cow gave,” Bob says. On average the cows produce 7,500 to 8,000 gallons of milk per week. Each cow gives about eight and a half gallons of milk daily, or 136 glasses’ worth. Maple View distributes to stores within about 50 miles of the farm, including several Harris Teeters and Whole Foods Markets.

On those supermarket shelves, Maple View products stand out. Maple View milk is one of the only brands sold in glass bottles. Glass containers cost more than plastic jugs or paper cartons. And the upkeep is a lot of trouble: Maple View collects used bottles from local retailers, washes them, and refills them.

But the extra effort and expense is worth it, Bob says. Reusable glass benefits the environment and keeps milk tasting fresh.

Since Maple View is the only glass bottler in the Triangle, employees often receive glass containers from distant or now defunct businesses. A cabinet in the ice cream store displays dozens of bottles customers have turned in. Some have gimmicky labels, like Scooby Doo Dairy and Martian Milk.

But Maple View’s own bottles are plain, clear glass. The different colored tops designate the product inside: red for whole milk, light blue for skim, and green for buttermilk. The quart and half-gallon jars recall a time when local dairies were the norm and glass the common option — things that, if you think about them, still make sense.