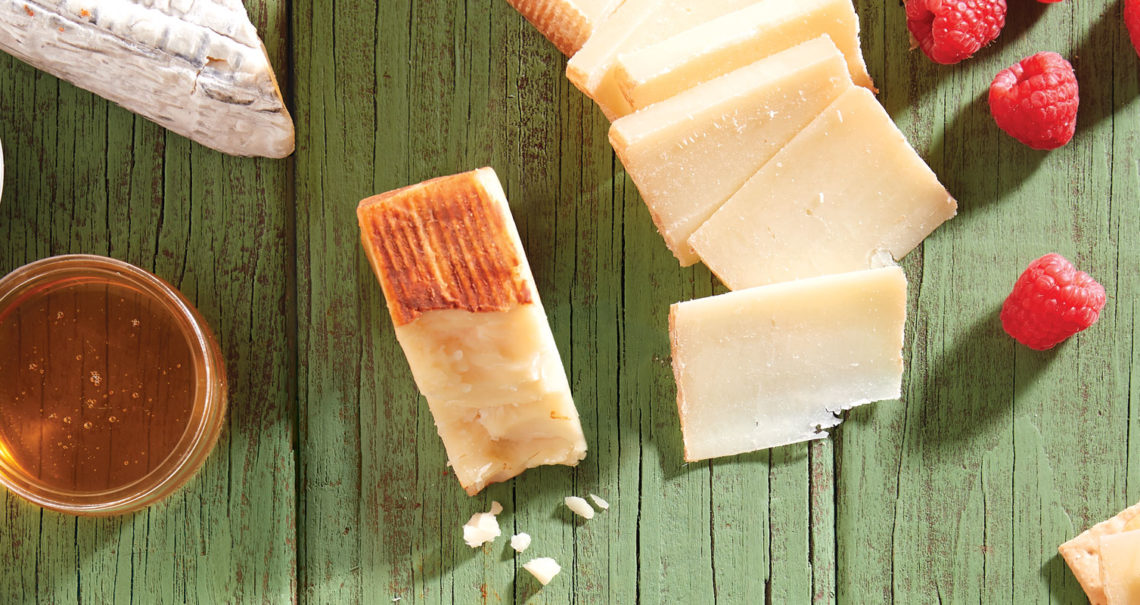 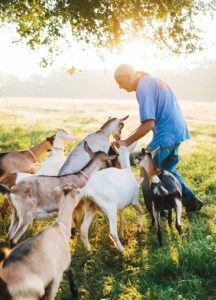 Kathryn Spann had been practicing law in New York City for more than a decade when she and her partner, Dave Krabbe, visited the area in rural Durham County where Spann’s family had owned land for generations. Krabbe was enchanted. They soon bought a historic former tobacco farm without quite knowing what they’d do with it. But when the goats arrived to help clear the overgrowth, the pair couldn’t resist their charm and curiosity. “Cheesemaking is intrinsically a labor of love,” Spann says. “It’s a very tactile way of being part of the cycle of nature and birth.” Prodigal’s award-winning cheeses tell stories of the land: When the railroad came through in 1890, the people of nearby Hunkadora thought their town needed a more dignified name, so they changed it to Bahama. More than a century later, that former, cheerful name suits Prodigal’s sweet, tangy, ash-coated goat cheese (below, top). Field of Creams (below, bottom) is lightly dusted with rosemary, juniper berries, and other herbs to evoke the woodsy things — pine needles, cedar, brambles — that their goats love to eat. prodigalfarm.com 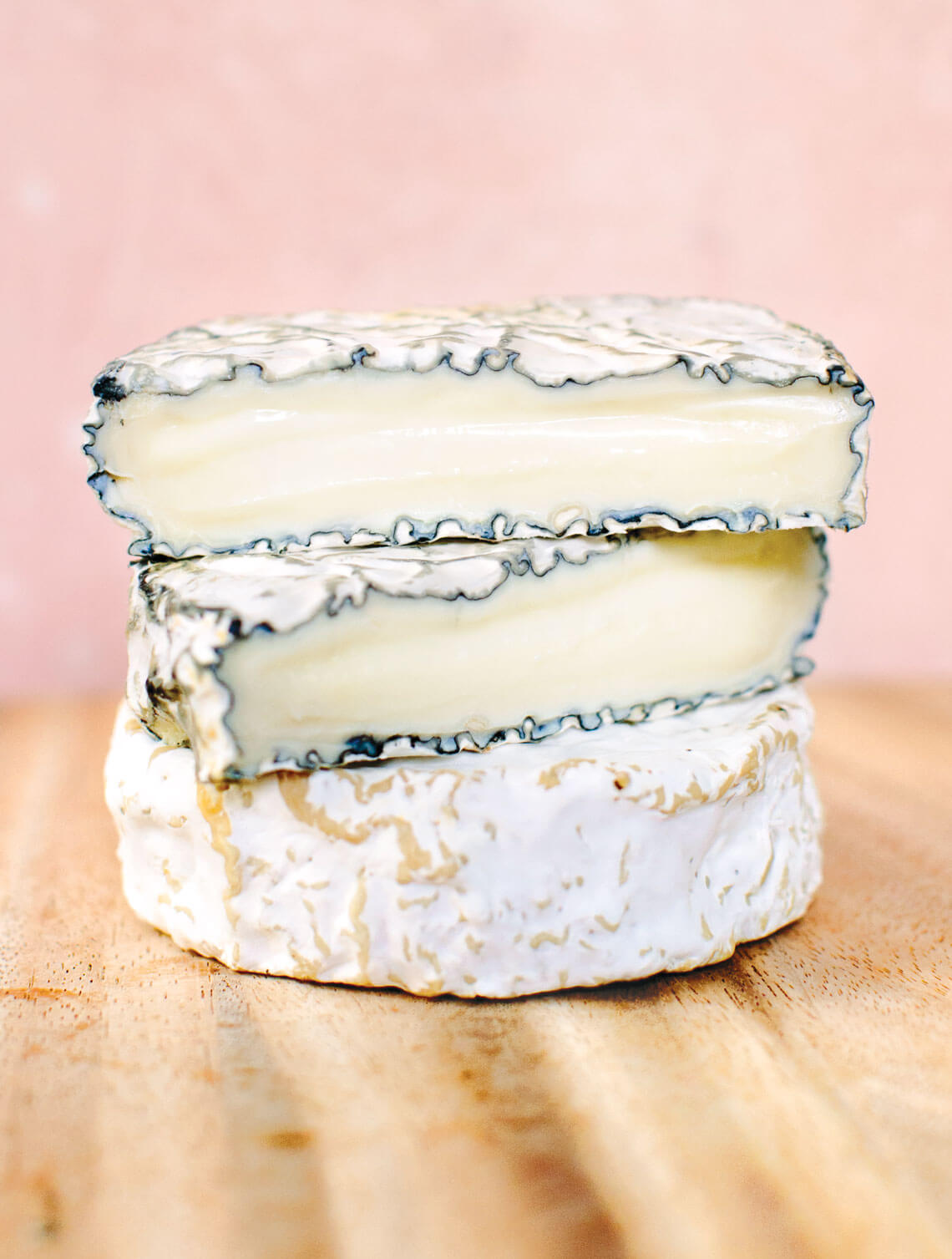 David and Faythe DiLoreto fell in love with mild, creamy mozzarella di bufala while vacationing in Italy. But when they returned home, they found that no one in North Carolina was making cheese with water buffalo’s milk, the way small Italian farms have done for generations. So the DiLoretos decided to try it themselves. It was harder than they expected: American recipes for mozzarella — which call for cow’s milk — are incompatible with buffalo’s milk, which is naturally sweet and higher in protein and butterfat. The couple connected with a family farm in Italy, and through trial and error and translated recipes, they finally achieved cheese with the proper stretch. On Saturday mornings, the DiLoretos sell fresh mozzarella, gelato, butter, and meat in a small farm store on their 64 acres in Rowan County. Outside, their buffalo laze in the shade, as friendly and eager for attention as oversize dogs. fadingdfarm.com 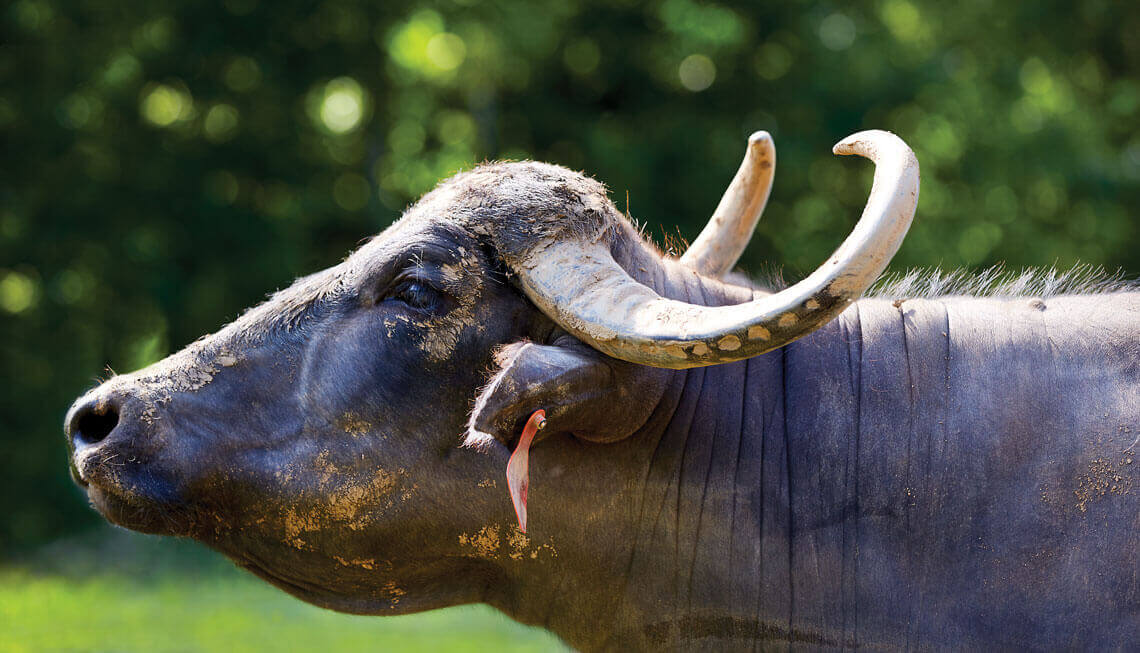 Water buffalo originated in Asia and have been raised on farms in Italy for centuries. When they grow up around humans, the DiLoretos say, water buffalo are gentle and easy to work with. Effie and the others know their names and come when called, especially to have their chins scratched. photograph by Stacey Van Berkel

In an underground cave in Buncombe County, Victor Chiarizia’s cow’s milk cheeses age anywhere from three months to more than a year. Chiarizia, a glassblower for 45 years, inherited a love of making things from his father, a stonemason and plasterer who emigrated from Italy. As a boy, Chiarizia would help his dad make cheese in their family home. They weren’t using the finest ingredients or creating the fanciest cheeses, but making a simple mozzarella or farmer’s cheese brought his father joy. Today, Chiarizia applies modern science to his cheesemaking, but, he says, “I still have the visions of how they do it in the old country.” To emulate the techniques used in France and Italy, he built his cave with stone walls. When it rains, water seeps in, fostering the growth of natural flora and imparting a taste of the Blue Ridge. 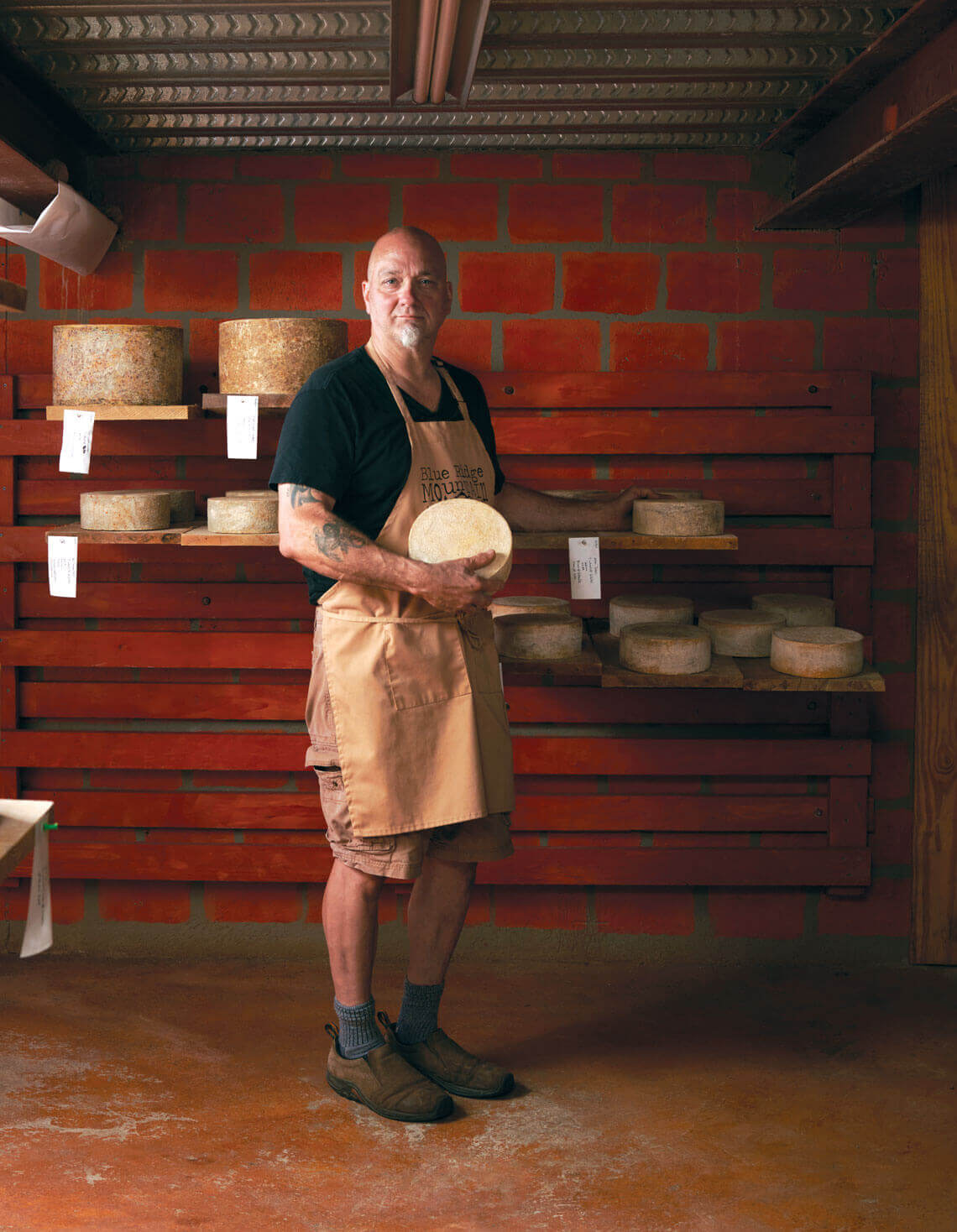 The stone walls of Victor Chiarizia’s cheese cave let in moisture, giving this Thai chili pepper cheese and others their distinctive terroir. “What we make here can’t be made anywhere else,” Chiarizia says. photograph by Jack Sorokin

At an early age, Jen Perkins learned that cheese was something special: Her mother was not a showy person, but whenever she expected company, she would stock the fridge with a wheel of Brie. Cheese, Jen understood, meant celebration, family, bringing people together. Years later, she became fascinated by the idea that so many different things could be done with a single raw element. She began taking classes and making cheese at home in her basement. In 2009, Jen and her husband, Andy, started Looking Glass Creamery in Fairview and, in 2017, moved operations onto Polk County land that’s been a dairy farm since 1947. All of the milk they use comes from the cows on their farm — animals they’ve carefully bred to thrive on their rolling 144 acres of pastureland. And in their new, bigger cellar, the Perkinses have more room to grow and dream and make cheeses that follow the seasons. lookingglasscheese.com 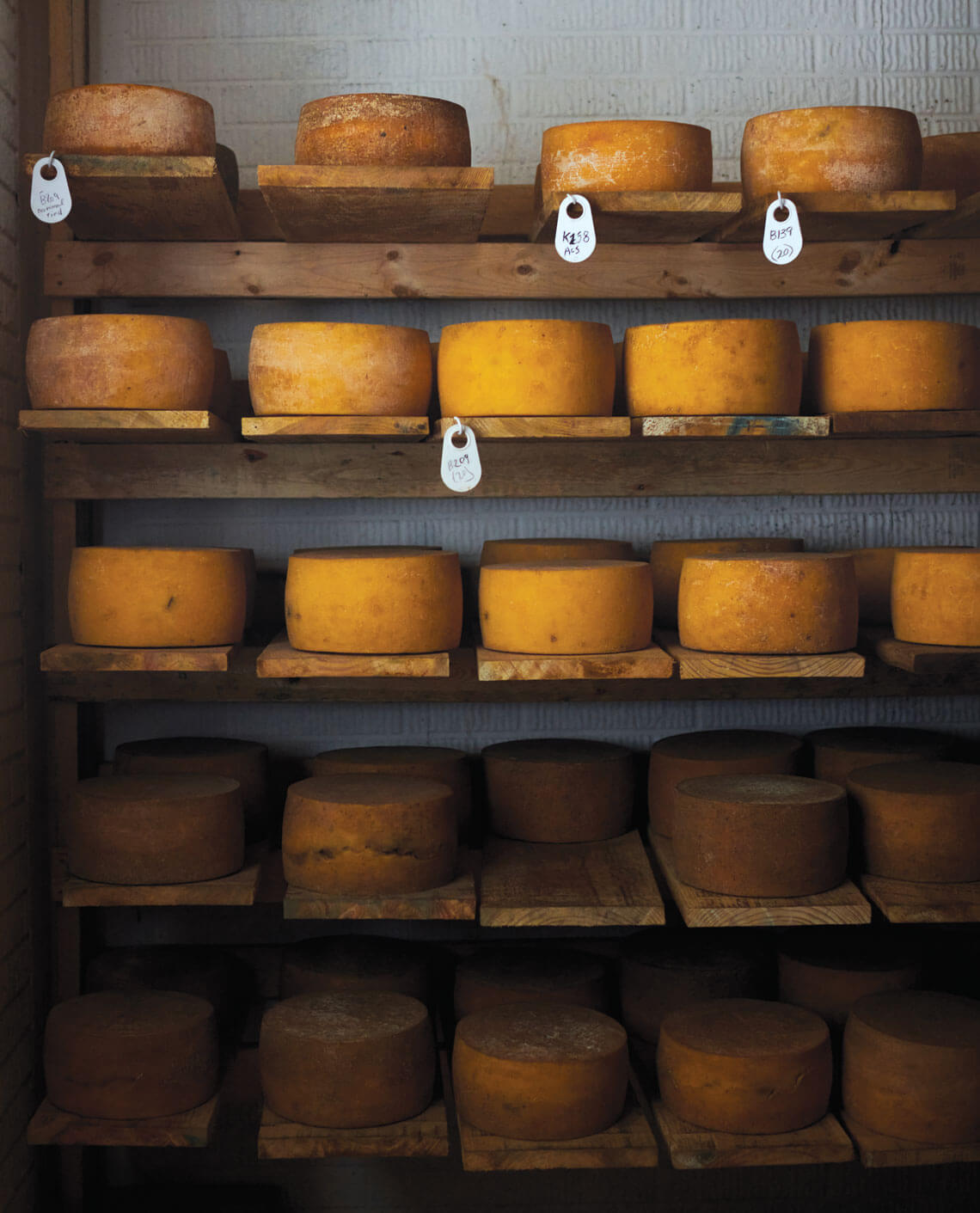 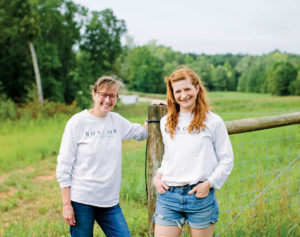 By the time Austin Genke finished building a creamery on his Orange County farm in 2015, he and his sister Samantha had both spent years immersed in farming and food culture. Now, Austin and his wife, Dani, tend the farm’s goats, and Samantha turns the herd’s milk — plus cow’s milk from local dairies — into award-winning cheeses inspired by the siblings’ Italian heritage. Boxcarr’s best-known offering, Rocket’s Robiola, is based on a type of cheese that’s sometimes described as the Italian answer to French Camembert, Samantha explains, and one that’s hard to find in the U.S. She and cheesemaker Alessandra Trompeo developed it together, visiting Trompeo’s family in the Piedmont region of Italy to research and re-create a taste of the elusive cheese in the North Carolina Piedmont. boxcarrhandmadecheese.com 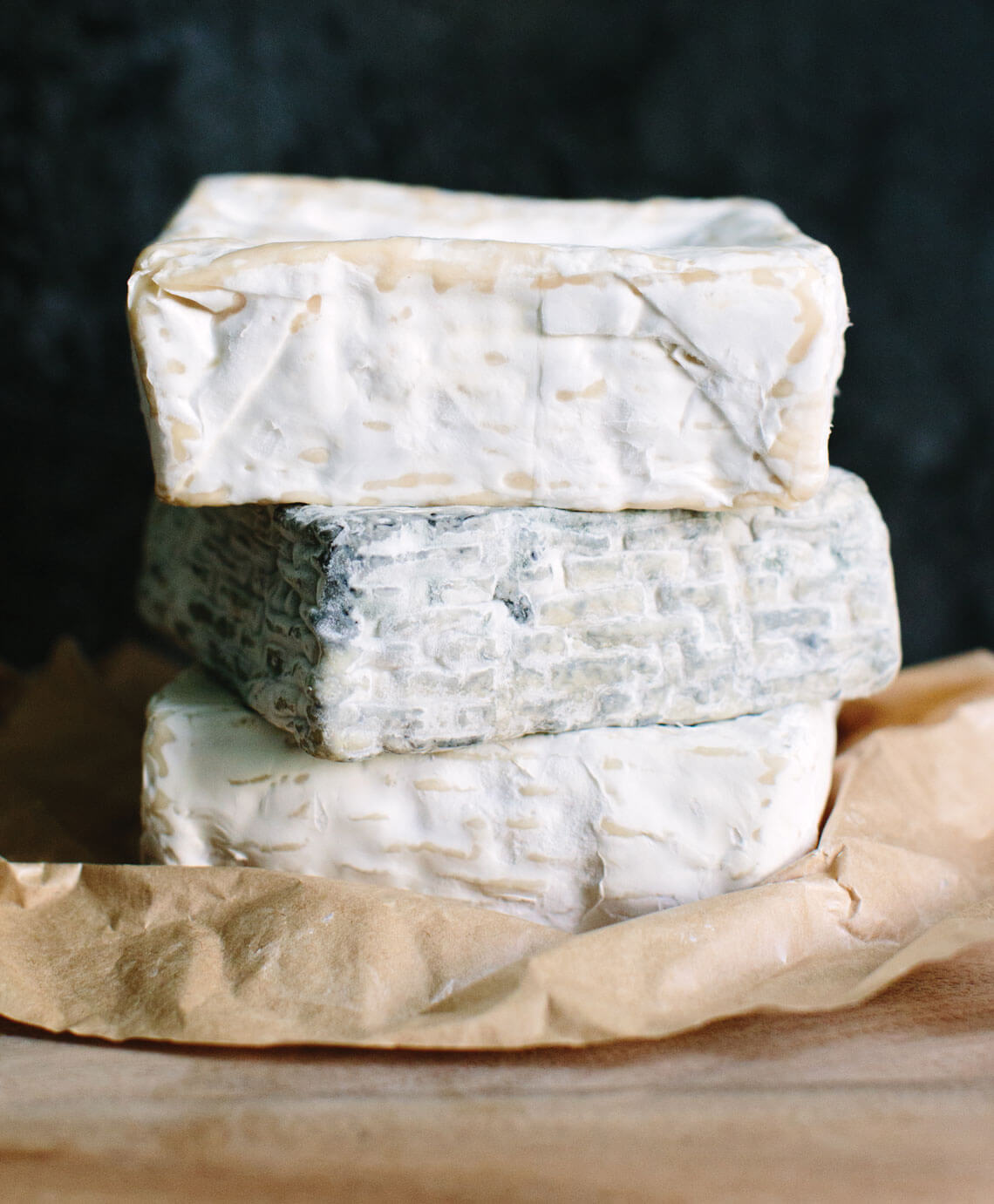 Some of Boxcarr’s offerings include (top to bottom) Cottonseed, Rocket’s Robiola, and Cottonbell. photograph by Anagram Photo

Fleming Pfann had never tasted goat cheese when she and her husband, Brit, moved onto a historic property in Chatham County in 1987. But when they brought in goats to help clear the land, Fleming, who’s lactose intolerant, found that she could digest their milk. By 1991, their farm was a licensed goat dairy, one of the first in the state. Fleming, an artist and a home cook, learned to make cheese that she enjoyed — mild chèvre that works well in both sweet and savory recipes — while Brit, an engineer, ran a bed and breakfast on their land. Recently, they’ve traded duties, contributing their strengths to different areas of the farm. And the celebrity? Well, that comes from the goats, always the stars of the show. celebritydairy.com 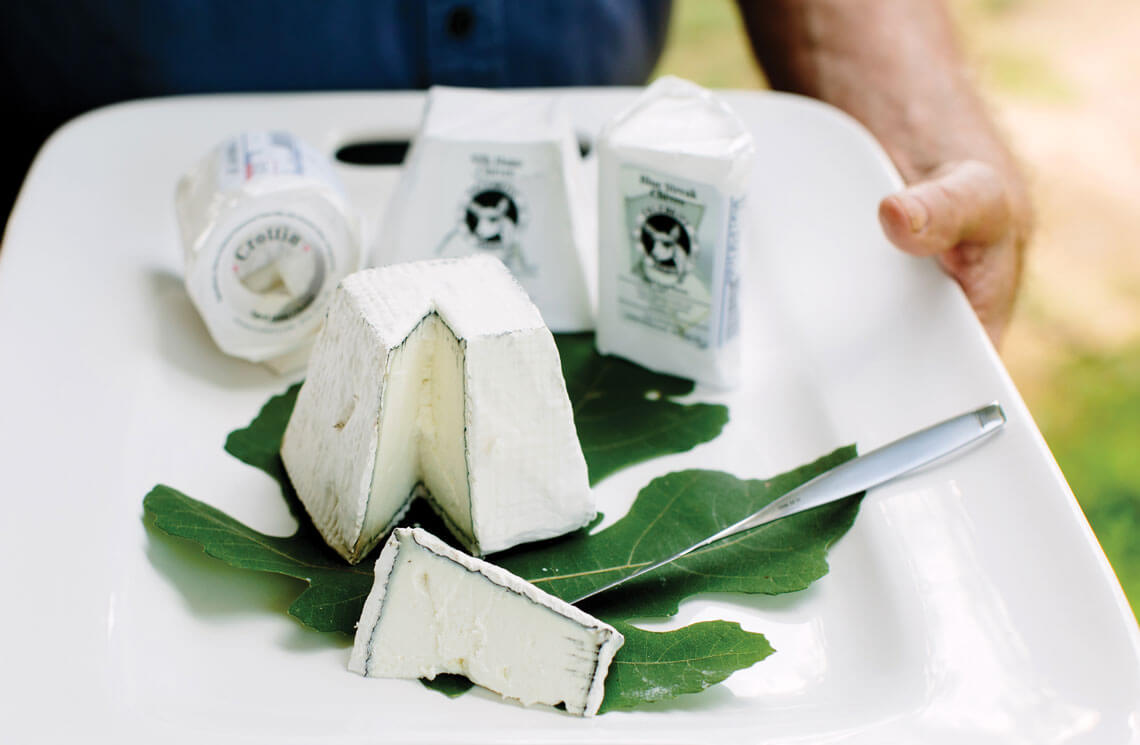 After Silk Hope (foreground) — named for the nearby town — won a national award in 2000, the Pfanns added other mold-ripened cheeses to their repertoire. photograph by Anagram Photo 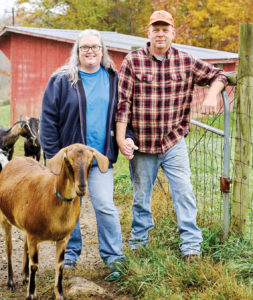 In the Piedmont, the story of Goat Lady Dairy is part of the local lore: In the mid-1980s, Ginnie Tate bought an old tobacco farm in Randolph County. She’d drive around town with her two pet Nubian goats, soon earning the nickname “the Goat Lady.” As her herd grew, she began making goat cheese, and in 1995, her brother Steve and his wife, Lee, moved to North Carolina to help her start the dairy business. After Ginnie’s death in 2009, Goat Lady Dairy continued to grow. A few years ago, the Tates sold the business to Carrie and Bobby Bradds, their longtime employees and neighbors. Just as the Tates always did, Carrie and Bobby Bradds invite visitors to the farm for monthly Dinners at the Dairy in the spring and fall. In a barn built of pine, oak, poplar, and cedar harvested from the property, the couple continues the Tates’ mission of bringing people a little bit closer to the source of their food. goatladydairy.com 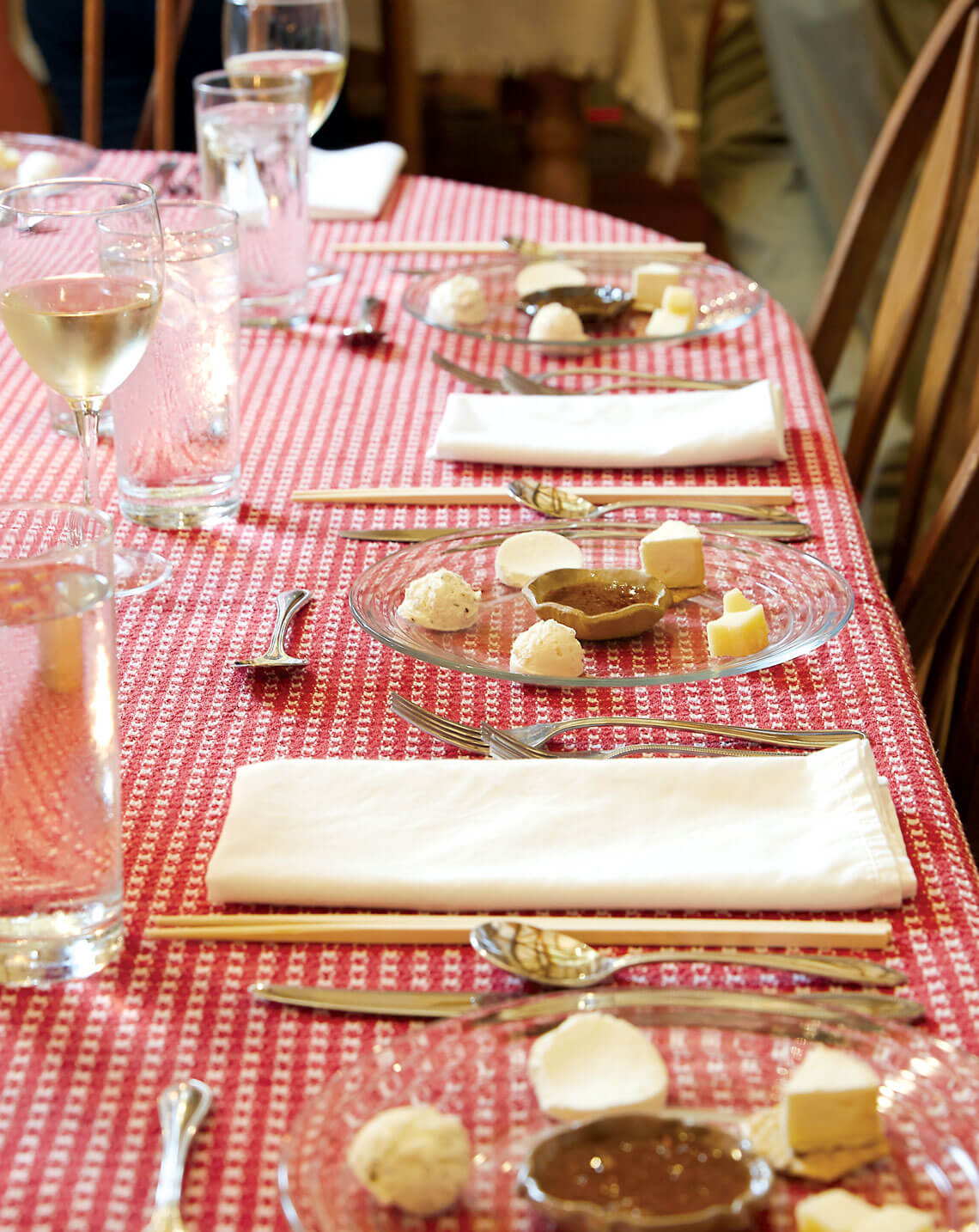 The cheese course at Goat Lady Dairy might include Lindale, a raw cow’s milk Gouda. photograph by Stacey Van Berkel

Part of the magic and mystery of cheese is the way it evolves, its flavors changing day to day, month to month, and year to year. Rachel Klebaur remembers the sheep’s milk cheese that captured her attention years ago. When she first tasted it, it was young, buttery, and a little sweet. Three weeks later, the flavors were earthier and much more developed. “I thought it was amazing that it had transformed in that way,” she says. In culinary school, cheese education was not part of the curriculum, so to feed her interest, she worked in a well-known cheese shop in New York City. In 2012, she jumped at the chance to open her own shop in Charlotte’s 7th Street Public Market. People who stop by her case are often surprised by the great variety of cheeses that are made in North Carolina, Klebaur says. She’s proud to fill her cheese case with the stories and flavors of so many local farms. orrmanscheeseshop.com 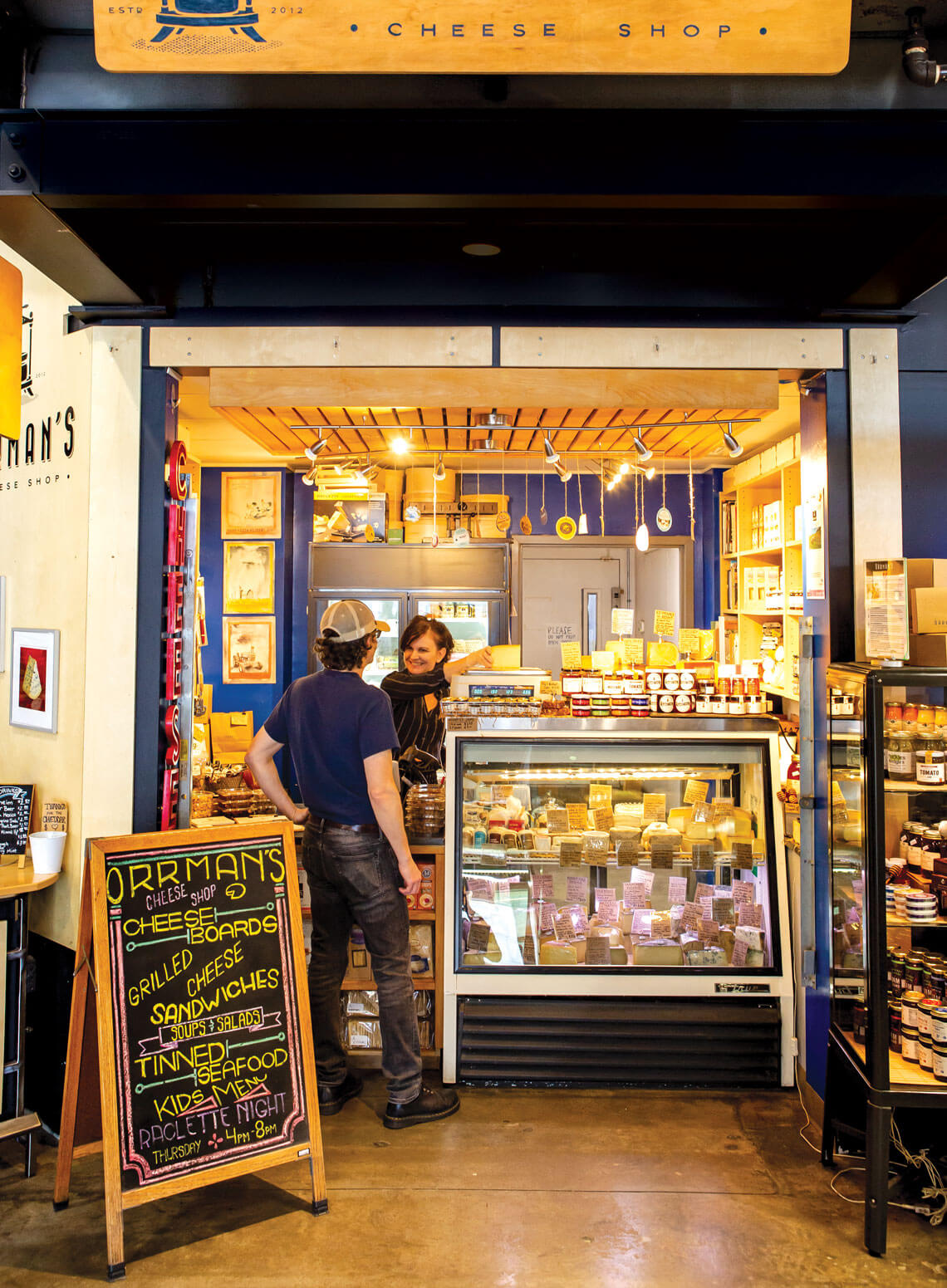 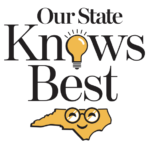 Related: In this month’s Our State Knows Best, we talked to three experts to find out which North Carolina cheeses they covet and the cheesy dishes they crave — plus, what tasting notes to look for. With our help, you’ll be king or queen of the charcuterie board.