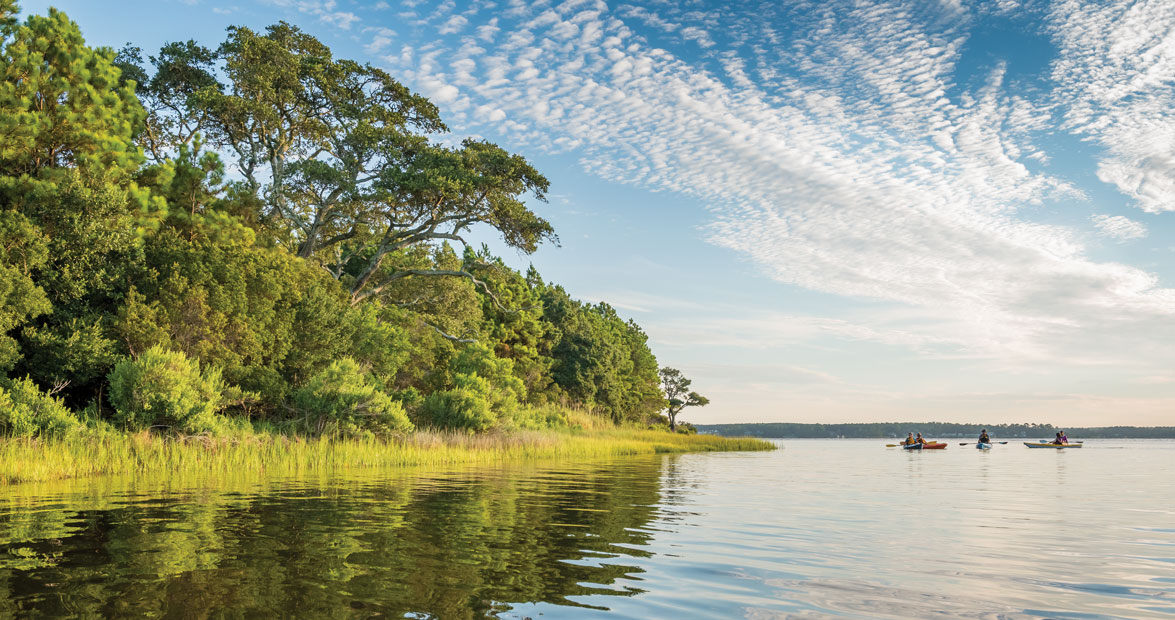 Thirty-six years ago, Todd Miller founded the NC Coastal Federation. He’d recently earned degrees in urban studies and city planning, but his earliest education — a childhood spent exploring the woods and waters around Bogue Sound — had inspired a reverence for nature and a passion for protecting it.

Miller’s first project, uniting local fishermen, environmentalists, and scientists in opposing a plan to strip-mine 120,000 acres of peat bogs, charted a course for the nonprofit, which now touches nearly every community along the coast. With a gentle hand and a long view of the future, Miller and his staff devote themselves to areas in need of care — more than 50 restoration projects to date — then share those stories, connecting North Carolinians more deeply to the places where land meets water. 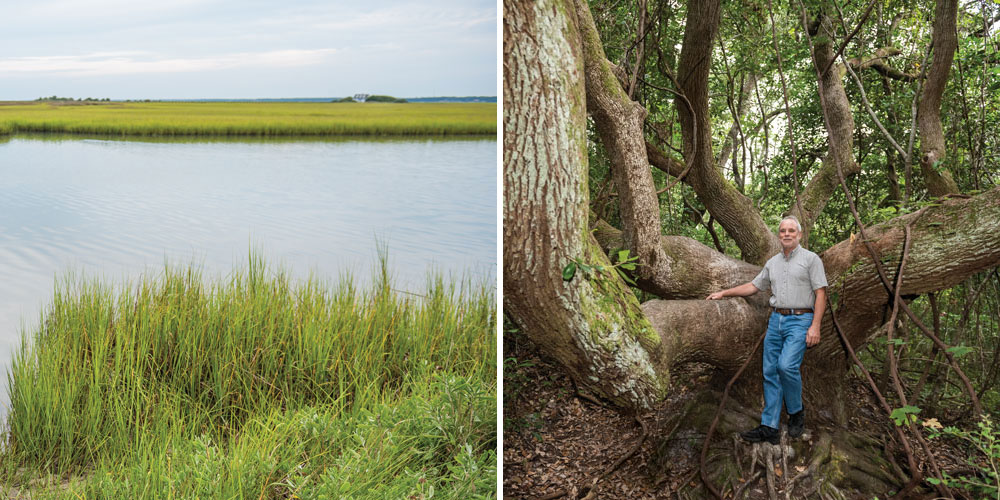 Hoop Pole Creek, 31 acres of marsh and maritime forest in Atlantic Beach, likely would have been developed if the Coastal Federation and its founder and executive director, Todd Miller, hadn’t purchased the land in 1997. photograph by C2 Photography

In 1950, a chemist and sailor named Ted Miller — Todd’s father — sowed the seeds for the Coastal Federation when he and his wife purchased a plot of land on Bogue Sound in the Carteret County community of Ocean. There, they raised their children to love the water. It was Ted who encouraged Todd to pursue a career in environmental stewardship, and it was in the Miller home that Todd wrote the initial grant proposal for the Coastal Federation.

Late in his life, Ted created EarthWise Farm on three acres of the family’s land as part of his research on healthy living; when he died, he left the organic garden to his son’s organization. Now, his daughter Cindy oversees EarthWise, and Coastal Federation members work the soil every Wednesday, honoring Ted’s memory, renewing their connection to the earth, and sharing its bounty as a true community. 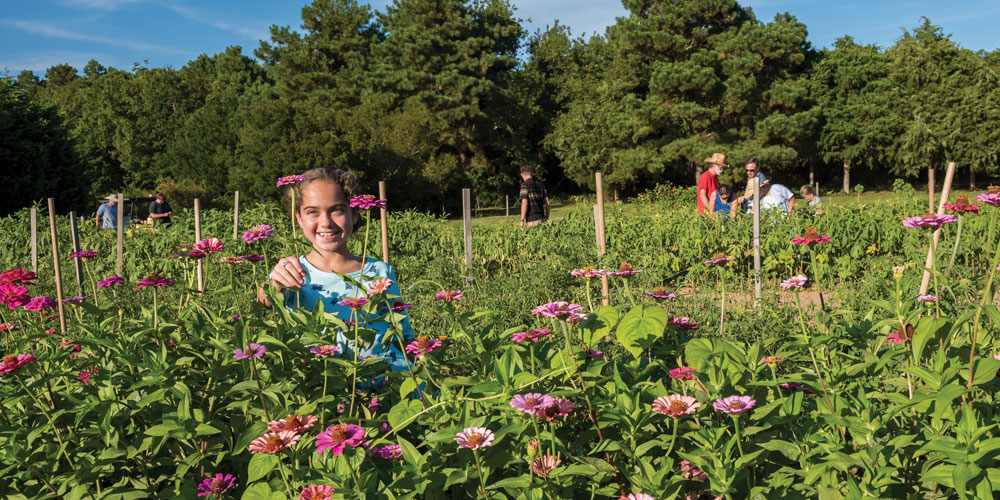 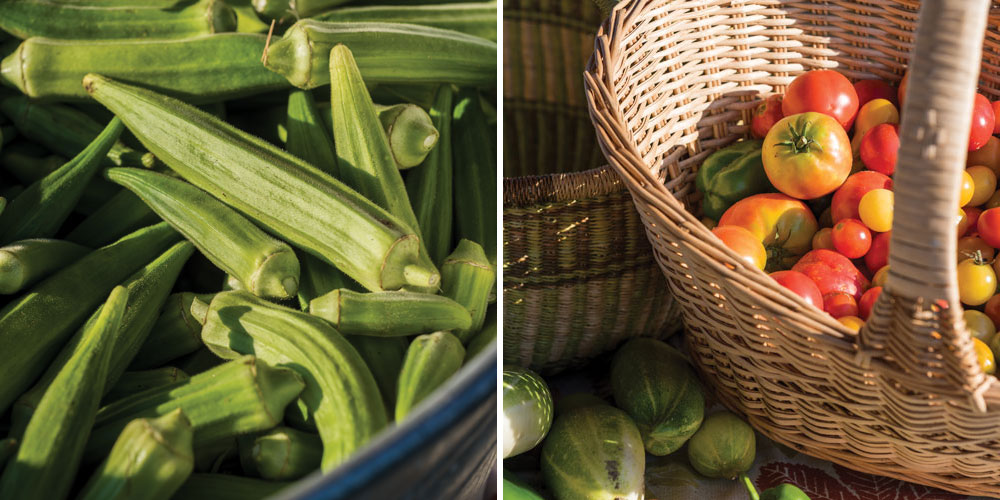 As Captain Ernie Foster navigates his sportfishing boat, the Albatross III, along Hatteras Harbor, he thinks about coexistence — how fish houses and charter operations like his can work side by side, all drawing a living from the water. And he thinks about Durant’s Point, the strip of land that protects that livelihood from storms on Pamlico Sound. Several years ago, Foster alerted the Coastal Federation that Durant’s Point was fast eroding.

As with other areas endangered by erosion, the Federation recommended a natural remedy: a living shoreline. They installed 300 feet of granite sill and rallied volunteers to plant spartina marsh grass, whose roots both stabilize sediment and serve as a nursery for the young fish, crabs, and shrimp that will one day populate the waters beyond. Since the Durant’s Point Living Shoreline was constructed in 2011, it has weathered droughts, storms, and hurricanes — all of which, Foster says, seem to make the resilient shelter of marsh grass even stronger. 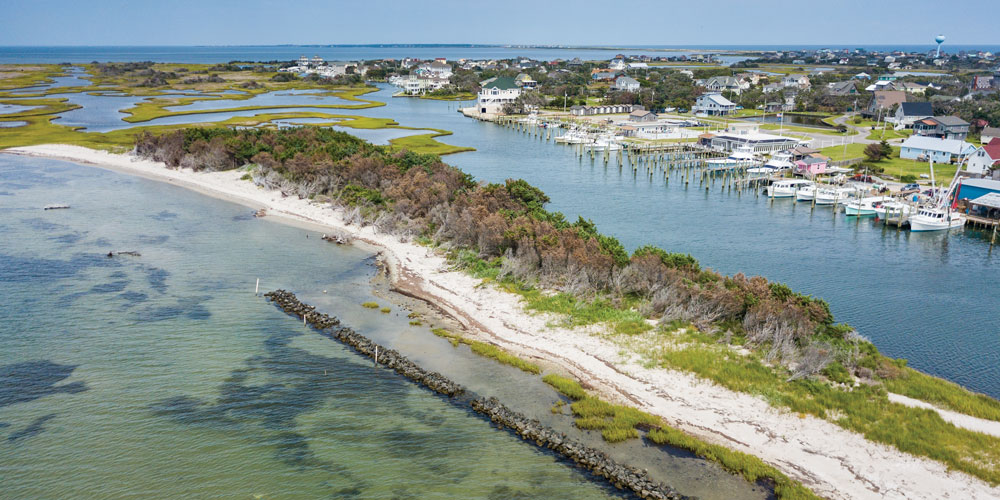 Outside of the Coastal Federation’s headquarters in Carteret County — one of the organization’s three offices along the coast — cars fly up and down busy NC Highway 24. But on the other side of the road is a different world. On the edge of the sprawling, 160,000-acre Croatan National Forest, the Patsy Pond Nature Trail winds through an open woodland, home to a diverse array of wildlife.

To the delight of local bird-watchers, the trail’s plentiful pines and namesake pond attract woodpeckers and wading birds, wild turkeys and warbling songbirds. When the Coastal Federation organized the development of the Patsy Pond trail, they envisioned just such a place, where visitors could reconnect with nature. The group continues to manage the trail, and many of its staff members — including founder Todd Miller, who begins each morning with a walk in these woods — also find themselves stepping into the forest for a peaceful escape. 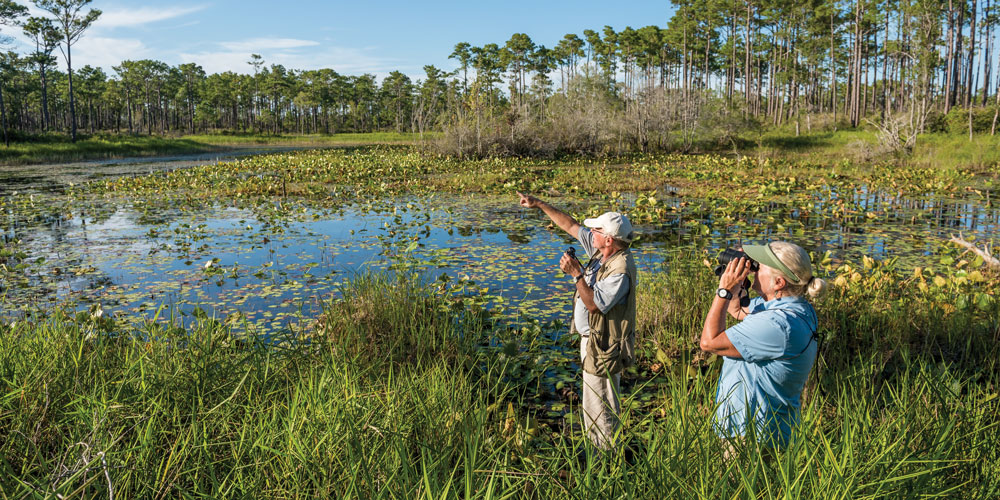 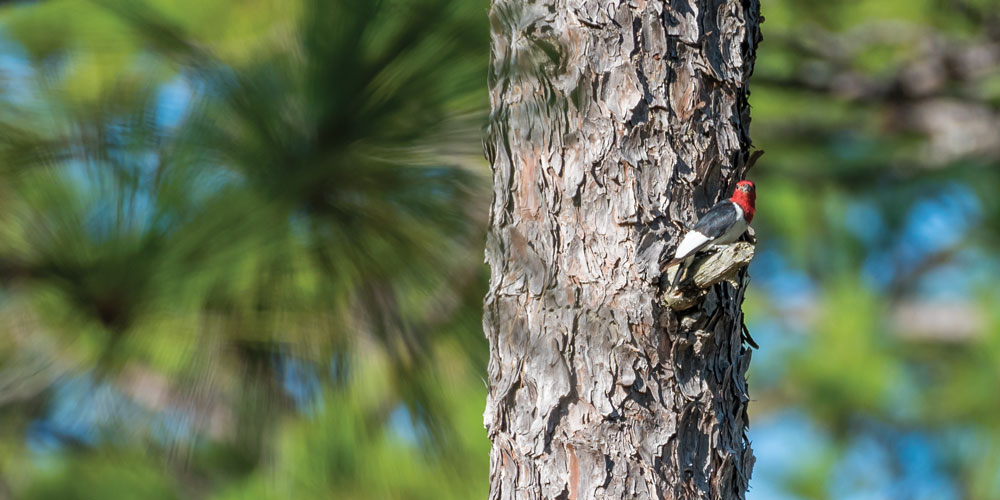 Just below the surface of Stump Sound, oysters huddle in stationary clumps, silently multitasking. More than just a link in our coastal economy, oysters provide habitat for other animals, help prevent erosion as part of a living shoreline, and clean the water — one oyster can filter up to 50 gallons of water a day. But the vital bivalve is also at a disadvantage: Once oyster larvae find purchase on a hard surface — often on other oyster shells — they stay there forever, for better or worse, their health a reflection of the waters around them. So they need all the human help they can get.

For more than a decade, the Coastal Federation has worked on making Morris Landing, the area around Stump Sound, cleaner and more hospitable to shellfish, building a stockpile area and a pier that allow them to add 20,000 to 30,000 oyster shells to the water each year. Shell upon shell, each addition is an invitation to some young oyster to make this reef its home. 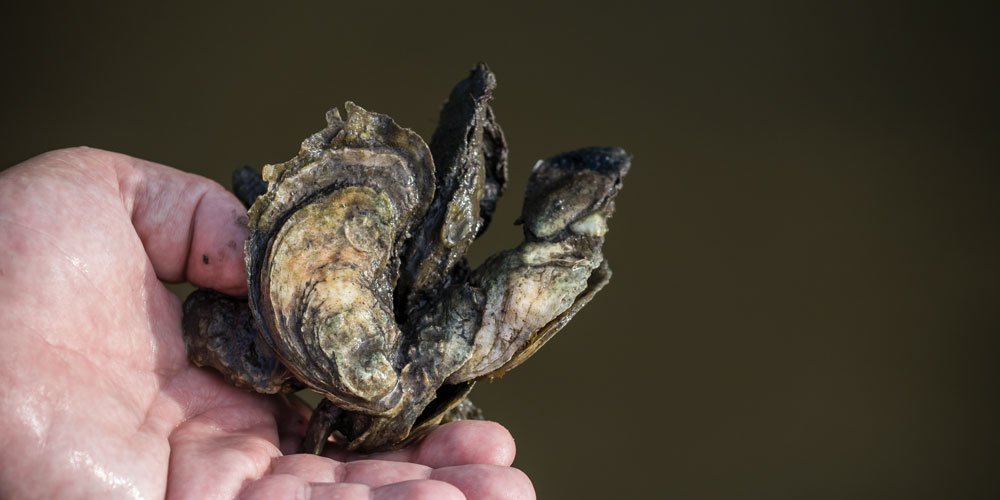 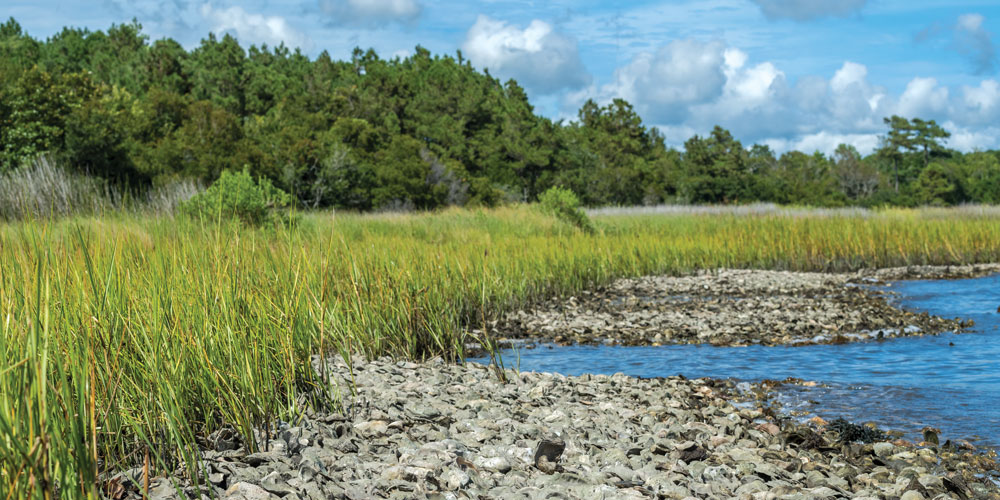 But by the early 2000s, the community’s marina — its sole access to Croatan Sound — had fallen into disrepair and was slated for development. Locals, however, wanted a working waterfront. The Coastal Federation rallied commercial and recreational fishermen to preserve this longstanding tradition, working with the Wildlife Resources Commission to install new ramps and docks.

In February 2015, residents gathered to celebrate the new Manns Harbor Access Area, the state’s first facility for those who fish for fun and those who fish for a living. The Rev. Bill Smyth, a Federation board member who gave the dedication that day, returned on Thanksgiving to fish for striped bass and witnessed a happy scene: at least 40 other boats — a parade of recreational and commercial fishermen and their families — all on the water for the same reason. “It was a magical day,” Smyth says. “Lots of happy people. Lots of fish — enough to go around.” 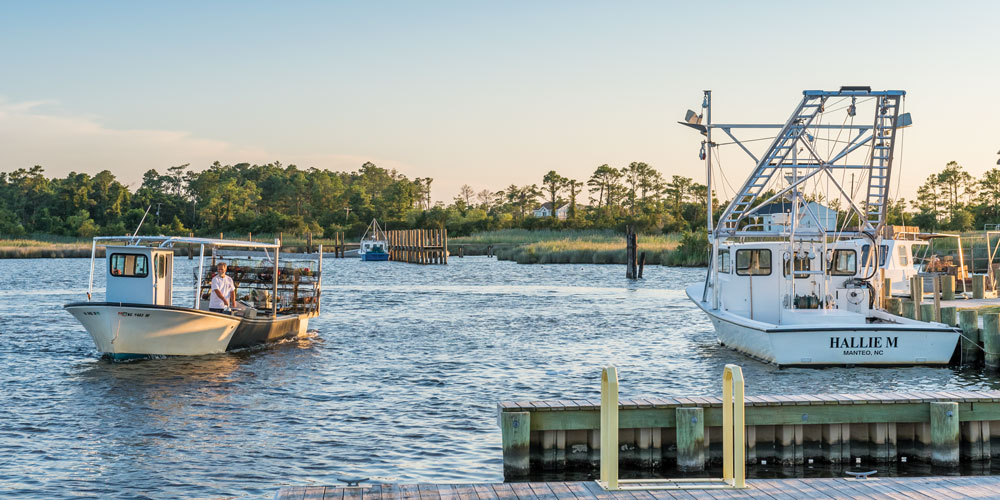 In 1983, Onslow County native Lena Ritter approached the newly formed Coastal Federation to ask for help. Developers had set their sights on Permuda Island, an uninhabited strip of land in the middle of Stump Sound. Like the rest of her family, Ritter had fished the sound her whole life, and she understood that runoff from the proposed development could endanger the health of her beloved waters.

As the Coastal Federation navigated state laws and regulations, Ritter rallied her neighbors on the sound. Together, the group saved Permuda Island, now a state coastal preserve, and Ritter continued to work with the Coastal Federation until her death in 2016. Once home to some of the region’s earliest human residents — possibly as far back as 300 B.C. — the island is now only accessible by boat. Yet its stunted trees and salt marshes are home to an abundance of life: egrets, herons, raccoons, marsh rabbits, and other creatures to whom Ritter gave a voice. 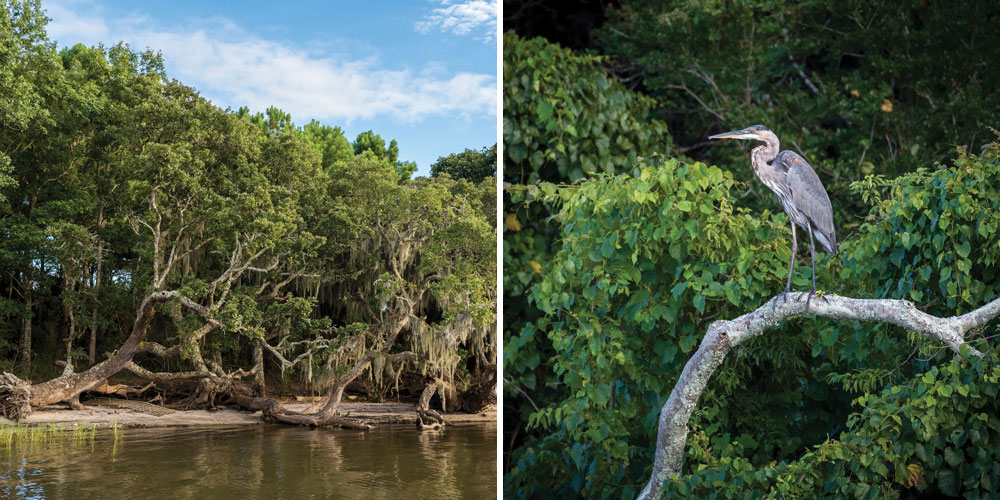 Members of the Coastal Federation know that a crucial piece of protecting our coast is passing along a sense of stewardship. The organization’s educational programs teach coastal stewards of all ages about the benefits of oyster reefs and living shorelines, and the dangers of stormwater runoff and marine debris. And sometimes, the programs simply offer a chance to experience nature up close.

On its coastal cruises to the islands of Hammocks Beach State Park, the Federation leads guided tours of Bear Island’s powdery sand dunes, swaying sea oats, and surrounding estuarine waters. For those in the know, the barrier island — accessible only by kayak, ferry, or private boat — is a secluded spot for fishing, swimming, and camping. For those who don’t know — or who want to know more — a Coastal Federation guide can share history, point out dolphins and shorebirds, and explain how the Federation’s efforts keep these waters pristine. 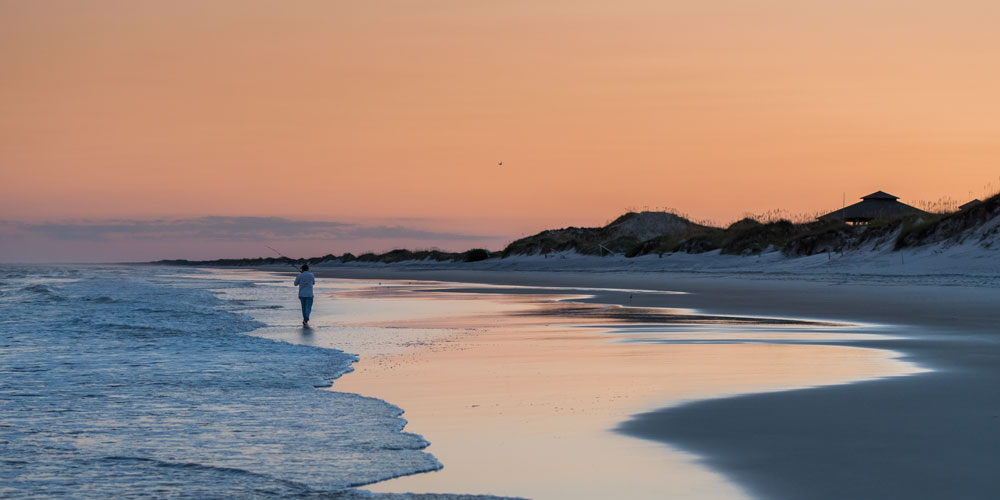 When the Coastal Federation began working with Hammocks Beach State Park in the early ’90s, the park comprised a gateway area on mainland Onslow County, and Bear Island, a three-mile barrier island. As Federation members worked with park staff to reduce stormwater runoff on the mainland, they were inspired to apply for funds to help purchase two other islands in the White Oak River — Huggins and most of Jones Island — which they donated to Hammocks Beach State Park.

Purchasing the islands meant preventing development there — and protecting the water. The partnership between the organizations preserved something much greater: the partnership between humans, wildlife, and the river we all share. To explore and support more special places on our coast, visit nccoast.org/sights. 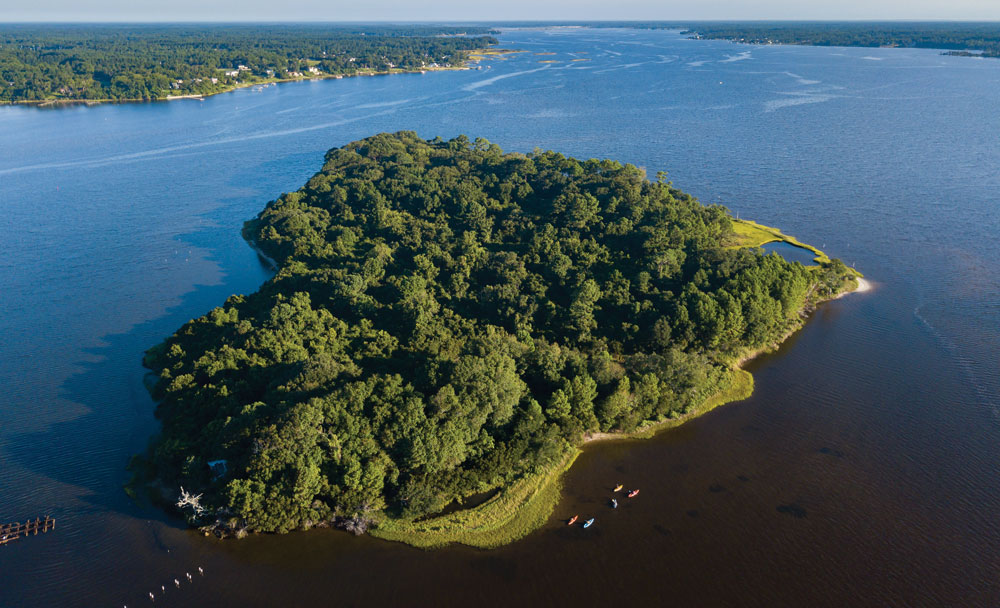