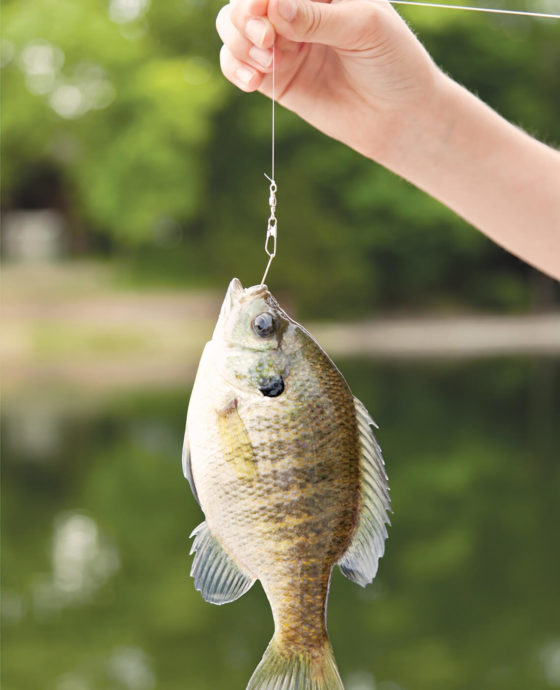 I slid one fish into the pan, and then the other. Together, they were just enough to fill the skillet, and more than enough for a filling shore lunch. The oil was at a pleasing, popping gurgle — a happy sizzle, nothing riotous or untidy — lifting the edges of the browning fish so that they danced in the brisk froth. Pan-frying fish is one of the most gratifying cooking exercises. The rewards of your work appear in real time. The fish turn to caramel and then to a deep brown that borders on black. The fins darken and crisp. Perfection is within seconds of disaster.

It’s a delicate balance, and all the more so when a truck tailgate is your kitchen table and the grease splatters zing your bare feet. I flipped the fish, hopping from foot to foot as the smoking-hot peanut oil pricked my legs. The ground underfoot was cooling off in the shade of a spring afternoon. The fins looked tempting. I snapped one off and popped it in my mouth. A crunchy bluegill fin is a gift from the fish gods. Nature’s potato chips. Those were perfect. Time to eat.

Last year, I made a New Year’s resolution to catch and eat a fish on the same day at least once a week. I typically have options: either a farm pond bluegill in Halifax County or a Spanish mackerel at Cape Lookout or a trout from a mountain creek. I fell embarrassingly short of the goal, but each time I did catch a fish and eat it before sundown, it reminded me of how much I appreciate the primacy of gathering my own food and staying so directly tied to nature. This year, I’m not going to put such performance pressure on an exercise I find so gratifying. Maybe that’s the real value of a resolution anyway: to change our perspective as much as our behavior.

That pond lay in a bowl of pines, off the highway, off the farm road, down a path that winds around an old tobacco barn moldering under vines. It’s tiny, maybe a quarter-acre, and I fish it three or four times a year. There’s nothing remarkable about it, other than the memories we’ve made together. I’ve caught a few piddling-size bass in the pond, but what I really come for are bream. Bluegills, to be precise. This time of year, when every icon of the Southern spring seems to stand in relief — the jonquils by the old oak as I turned into the pines, the frogs calling from the water, the yellow-green sheen of pollen on the pond — bluegill fishing peaks. The feisty critters use their tails to fan out moonlike craters in the shallow water for spawning and protect their turf by eating practically anything that comes their way.

I slipped the boat into the water, paddled gently to the far cove, and picked up a fly rod. Some folks say you’re not supposed to stand in a canoe, but I’ve stood in a canoe for 30 years, and I’m not going to stop now.

Too many folks forget about the bluegill. For so many, it’s the first fish of childhood, the first fish we ever caught. And for the rest of our lives, we chase that thrill we first felt when an old plastic red-and-white bobber bobbed, then bobbed again, then suddenly vanished with a plop and a tug we can still feel in our dreams. But we move on to bigger fish and more exotic surroundings. Boats and bass and billfish. We forget that bluegill fishing encapsulated all that was pure and simple and right with the world. These aren’t fish you have monogrammed on an $85 shirt. There aren’t a lot of bumper stickers extolling the pleasures of bream fishing. These were fish that you threaded on a 99-cent fish stringer and took home for dinner. These were fish that fed the soul.

“There he is!” I hollered, to no one, when a bruiser bashed my lure. The rod bent and darted toward shore. The fish pulled hard, but I pulled harder.

Bluegill fishing encapsulated all that was pure and simple and right with the world.

The bluegill could hardly say no to a yellow popping bug the size of a pencil eraser, or the black ant fly dangling underneath. I worked my way from the outer beds into the shore, moving the canoe with a single-handed paddle to reposition for fresh water. The rhythm played out for an hour and a half, during which I could feel my blood pressure plummet and my mind clear. That’s enough. That’s why I was there. I didn’t have to fish until dark.

I dragged the canoe onto the bank and dropped the truck tailgate. An old red plastic milk crate held a camp stove, a frying pan, a plastic baggie of House-Autry seafood breader, a water bottle filled with peanut oil, and a shaker of Old Bay. I could live for a week out of that meager storehouse, and eat like a king all seven days. I cleaned two fish and dredged them through the breading, then slipped them into the pan.

To be honest, at that point, I’d forgotten all about my New Year’s resolution. It didn’t matter if those bluegills were my fish of the week or the first I’d caught in a month. I don’t think there’s been a spring in the past 38 years that I haven’t caught a farm-pond bluegill. This rite of spring seemed almost timeless. I didn’t need to eat these fish as much as I needed to catch something wild and cook it and complete a circle that’s been turning across deep time.

I suppose, then, that I needed to eat those fish after all.

Soon, all that was left were bones and breading crumbs and an open jar of my mom’s sweet pickles. A wood thrush serenaded the twilight, its ascending and descending trill a perfect companion to the setting sun. I hoisted the canoe onto the truck and cinched it down tight. The day seemed almost over, but there was still time for even more perfection. As long as the traffic had died down on U.S. 64 West, I thought I might still be home in time to convince Julie to go out for ice cream.