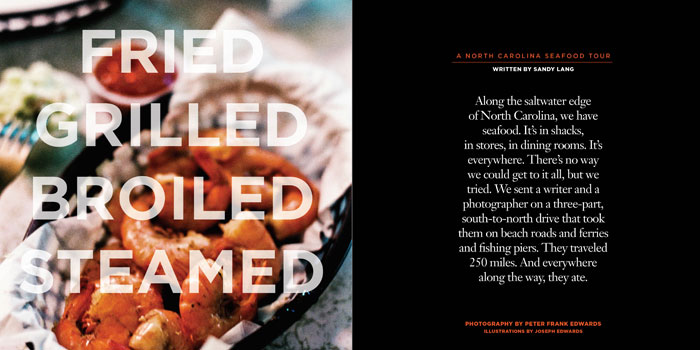 It starts at the state line with hot oil. Driving into North Carolina from the south, Calabash is the gateway to North Carolina seafood, and it’s known worldwide for its style. Pick a place in this little town — Ella’s or Beck’s or Coleman’s or Captain John’s — and you’re eating some variation of a family recipe that started more than 60 years ago.

And it gets better from here.

Just up the road, if you veer off the northern path of N.C. Highway 179, yank the wheel right, and head east into Sunset Beach. The last place before crossing the bridge is Twin Lakes Seafood Restaurant, where Ronnie and Clarice Holden have served up a taste of the Brunswick Islands for 40 years.

On our tour of North Carolina seafood, photographer Peter Frank Edwards and I take the ferry from Southport to Fort Fisher to cross the Cape Fear River. Sandpipers skitter on the banks. Soon, we roll off the boat and past the wind-sculpted trees at Fort Fisher. At Kure Beach, we can’t miss the fishing pier, extending out from the shore for 712 feet. To reach the pier, you walk through a pier house store that sells ice cream cones, T-shirts, and sharks’ teeth jewelry. The wood-floored space smells of coffee and popcorn, and on one wall are hundreds of snapshots of people posing with fish.

Outside, a boy in a red sweatshirt talks on a mobile phone. “It’s good,” he says. “We’ve caught about 12 trout.”

Soon, we head up the road to Carolina Beach and our first official stop: