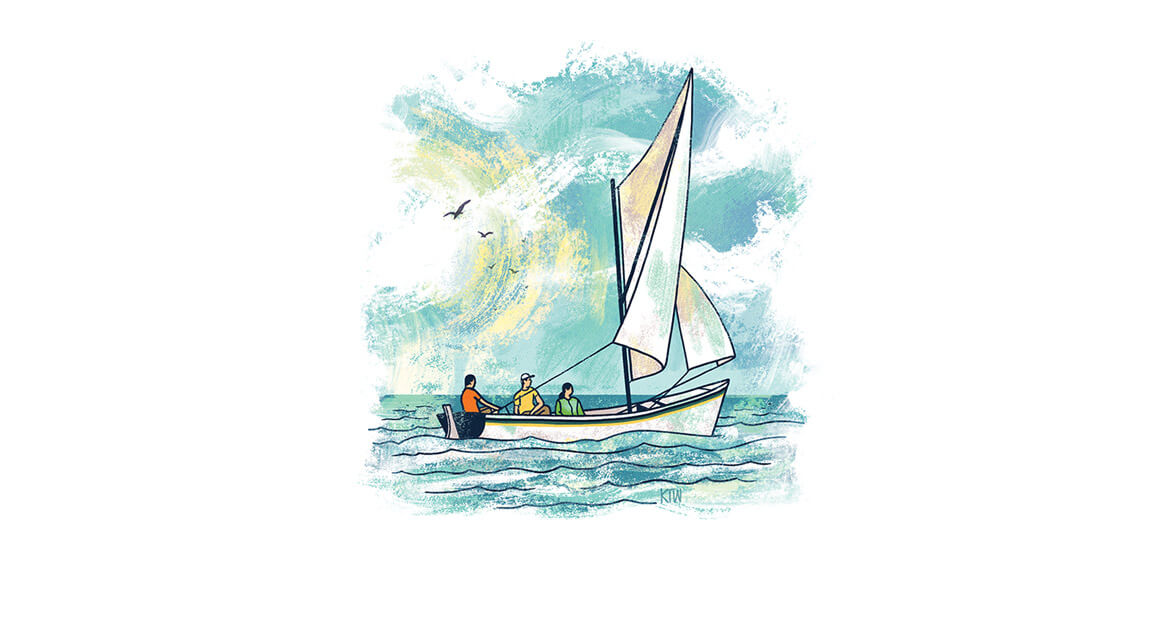 A thing becomes a symbol by being so completely what it is that it transcends itself, and becomes the literal repository for all the virtues it embodies. This one, the shad boat,  is a vessel to carry men from the island harbor of Manteo to their squally fishing grounds — and safely home again.

This evening we embark from that same waterfront — the heat of the long, cloudless afternoon now moderated by a southwest breeze blowing across Shallowbag Bay at 10 knots, gusting higher. Skipper Charlie Parker steers us away from the dock aboard the Spirit of Roanoke Island, a 25-foot shad boat replica of the design perfected by George Washington Creef.

Designed and built in North Carolina, from local wood, by a native, the shad boat sailed the sounds well into the 20th century, as durable as the fishermen it carried. And in 1987 the boat became, by an act of the legislature, the state historical boat.

The Spirit was completed by volunteers in 2000, working with maritime history professionals to ensure authenticity and using the same hand tools that old “Uncle Wash” would have used at his boat shed behind his daughter’s house in Wanchese.

The Spirit is bright white with a black-and-green-over-yellow trunk stripe banding the hull just below the narrow side decks that follow the curving contours of the hull, broadening to eight feet at its widest amidships. The interior of the craft is undecked, a spacious open locker to carry fish and gear.

Besides the skipper and two crew members, seven passengers and a small white dog are aboard. The high bow is built to take on the steep, choppy waves of the wind-whipped shallow sounds, and it cuts through the placid bay easily. The boat slips along with a musical rush, powered by a sprit mainsail — shaped by a 22-foot-long sprit rising at a sharp angle from the shorter, thicker mast. There’s no boom to worry about — it would just interfere dangerously with the work of fishing. A jib set on a stay between masthead and stem post provides handy steering.

After only a little while, Capt. Parker gives me the tiller. It feels thick and solid in my hand, and just a touch either way brings a ready response from the hull. I can feel the power of the hull in the stiff tiller, a slight muscular pressure amplified into a heavy rush of forward momentum. The centerboard is down, holding us windward as we skate along in the freshening breeze.

I jibe the stern through the wind and gather headway for a moment before steering her back onto a close reach, the most exciting point of sailing. The boat cocks over and the centerboard bites like it’s locking into gear and we accelerate in a sudden rush, bow wave racing down the length of the hull. Sailing without engine noise is like being in free fall — the giddy sensation of speed multiplied many times over.

We slip along with a sea-kindly motion, no jerkiness or pounding, only occasional slaps of spray wetting the passengers on the low side rail.

The shoreline comes up fast, and we tack the bow through the wind and gather speed fast to avoid an anchored boat. This is a boat that practically sails itself — no yachting fussiness. A boat you can handle when you’re tired and cold and sunblind.

It’s also the boat that helped North Carolina recover from the devastation of the Civil War. Markets were clamoring for fish, one thing that war-wasted North Carolina had plenty of. The traditional local craft, a split-log dugout canoe known as a “kunner,” just couldn’t carry enough fish to be profitable.

Creef solved that problem. He’s remembered as a gentle soul, a tall, lean man with large, graceful hands and a flowing gray beard.

Sometime in the 1870s, he carved a half-hull model of the boat he saw in his mind’s eye: a fast, shallow-draft sloop with a broad bottom. Then around 1881, he built the real thing: framed and planked with Atlantic white cedar, also called juniper — a local straight-grained, rot-resistant wood that doesn’t shrink or warp with seasoning — with juniper knees for the curved braces, all of it held together with copper nails.

Uncle Wash built his boats in pairs, keeled from the same log. When his wife grew ill, he crafted twin white cedar coffins. He buried her in one, and 21 years later, in 1917, he followed her into the Cudworth Cemetery, snug in his final “boat.”

The day before we sailed, Paul Fontenoy, curator of Maritime Research and Technology at the North Carolina Maritime Museum in Beaufort, walked me through its collection — including the Tom Dixon, one of only four remaining Creef-built, round-bottomed shad boats.

“They’re very different from any other boat,” Fontenoy says. “The principal difference is the way that the keel is built, because the keel is essentially a very skinny dugout canoe that had framing put onto it, then was planked like a regular boat. It makes it very strong.”

Another long reach brings us back, and I give over the helm to Capt. Parker. We ghost into the harbor and kiss the dock with the sun setting fat and gold on the treetops. I can imagine what those fishermen felt back in the old days when they coasted into port, bearing another day’s haul, patting the broadside deck of the good boat that brought them home safe and sound.