In the popular imagination, cultural pioneers often stand larger than life — charismatic figures who blaze a trail through adversity by sheer force of conviction and personality. Susie Marshall Sharp is the antithesis of that archetype in nearly every way, yet her career becomes a record of milestones achieved, barriers broken, and new precedents set in that most traditionally male profession, the law.

Sharp is the eldest of 10 children born to James Merritt “Jim” Sharp — the son of a Civil War veteran and farmer, who “read law” and, after a series of false starts, set up a legal office in Reidsville — and Annie Britt Blackwell Sharp, descended from slaveholding aristocracy. While still a teenager, Sharp decides to pursue her father’s profession — despite the fact that there are almost no female attorneys in the state. To follow that path, she also determines that she will never marry.

She is almost deliberately plain, in high school wearing nondescript clothes and wire-rimmed glasses, her dark hair combed back from her round face and tied with an unfashionably large bow. Yet something about her resonates with her peers, who elect her president of the ninth-grade girls.

Thus begins a pattern that will endure throughout her life: She inspires trust and friendship, not through showing off or being the life of the party, but by radiating a kind of quiet confidence, a sureness of her own abilities. She becomes a skilled debater and salutatorian of her class. Even so young, she is already grounded in self-knowledge, smart but not overbearing, her considerable ambition anchored in both intellectual ability and integrity.

In 1926, she enrolls at the University of North Carolina at Chapel Hill Law School — which, since 1911, has graduated only three women — as the only woman in a class of about 60. She endures hazing from her male classmates. In class, she does not put herself forward — just as later, as an attorney, she comports herself with keen composure rather than brashness, so as not to ruffle the egos of her male adversaries. But outside of class, her affable wit earns her many friends and admirers among her male peers. Ultimately, she is named to Law Review. She is one of just two in her cohort to be awarded the prestigious Order of the Coif and graduates with honors. Yet despite her own successes in male-dominated spaces, she is not a feminist and opposes the Equal Rights Amendment.

She is most often described as “petite,” a traditional Southern woman who enjoys gentlemanly courtesies but secretly carries a loaded pistol in her handbag. She never weds but engages discreetly in several extended love affairs, one with a married professor who has two children — she arranges for her own love letters to be destroyed or returned to her, to avoid scandal. She resolutely keeps her private life separate from her public persona.

She comports herself with keen composure, so as not to ruffle the egos of her male adversaries.

She recoils from the hurly-burly of politics but works effectively for the Democratic Party, which has dominated the legislature and courts throughout the 20th century. She is especially keen to see women get involved in politics and galvanizes the support of women in Rockingham County to help elect Gov. R. Gregg Cherry in 1944.

For two decades, she represents Black and white clients in partnership with her father as part of Sharp & Sharp and becomes the first woman to serve as a city attorney in North Carolina. In 1949, Gov. W. Kerr Scott names her to the superior court bench, the first woman to hold that position.

Then, in 1962, Gov. Terry Sanford appoints her to the Supreme Court — the first woman ever to serve on the state’s highest court. Sanford recalls decades later, “The selection of Susie Sharp to be a member of the Supreme Court was the most widely approved appointment that I ever made.”

The 1972 elections sweep into office a Republican governor, James E. Holshouser Jr., with the power to fill upcoming vacancies in every court with Republicans. And a 1972 referendum mandates that justices retire at age 72. Chief Justice William Haywood Bobbitt, coincidentally, turns 72 that very year. He chooses to finish out his term rather than retiring under a Democratic governor who can appoint his successor, so in 1974, for the first time since 1902, a new chief justice will be elected.

The chief justice not only guides the deliberations of the Supreme Court but also will control the Administrative Office of the Courts by appointing its director, who assigns judges to various courts, controls salaries and personnel, and manages the state court system in general. 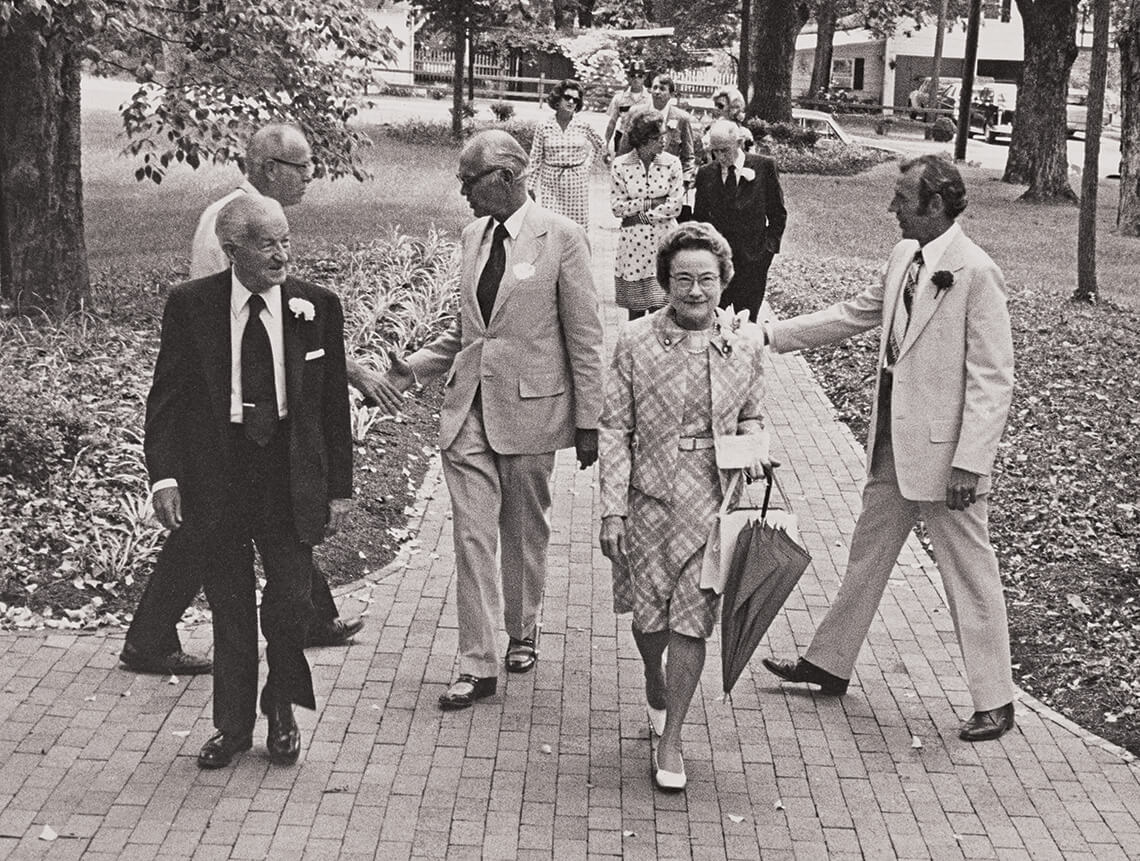 In 1975, Sharp (pictured with her predecessor William Bobbitt, in the dark suit) became the second woman in the U.S. to serve as chief justice of a state supreme court, and the first to be popularly elected to the post. photograph by HAROLD MOORE/THE HERALD-SUN, IN THE SUSIE SHARP PAPERS #4898, SOUTHERN HISTORICAL COLLECTION, WILSON LIBRARY, UNC-CHAPEL HILL

Justices Bobbitt and Carlisle W. Higgins both urge Sharp to run — she is the next most senior justice and the traditional heir-apparent: 67 years old, with a dozen years of experience on the Supreme Court.

“Now that the die is cast I’m scared again,” she confides to a former colleague. “[I]n following Judge Bobbitt I can only be an anticlimax. Few there are who have his wisdom, learning, temperament, and character; and I am not in his class. Today the chief justice has many duties in addition to writing the same number of opinions as the other justices. And you know what a slow writer I am!” 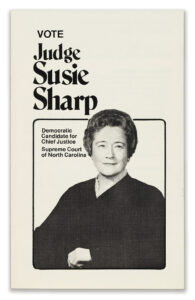 Her Republican opponent is James M. Newcomb, a white man with no legal training or political experience. He defeats a well-qualified and experienced Black district court judge, Elreta Melton Alexander, in the Republican primary — stunning Democrats and Republicans alike.

Sharp runs an exhausting and effective campaign, calling on every political ally she can muster. And in November 1974, she becomes the first woman ever to be elected chief justice of a state supreme court. Her mandate is astonishing: 74 percent of the vote.

Having continued to live in her childhood home with her parents while practicing law, Sharp moved to Raleigh only after she was appointed judge — first to the Hotel Sir Walter on Fayetteville Street, such a favorite haunt of legislators that at one point it becomes an informal home to the state Democratic Party, and later into her first apartment. She travels extensively, enjoying Broadway shows in New York, trips to Europe, and a cruise to Nova Scotia with colleagues. She remains something of an enigma: outwardly controlled, proper, and cheerful, but also suffering chronic cramping and headaches from a condition known as dysmenorrhea — so severe that she undergoes surgery and, at one point, entertains the idea of bearing a child as a remedy.

But nothing seems to slow her down. She is a quiet dynamo, and in a real sense, her professional passion becomes dispassion — the ability to separate her own opinions and prejudices from her absolute fealty to the law.

Sharp is no crusader for social justice — her family-inherited segregationist views are well known, and her attitudes become, if anything, more conservative over time. For the North Carolina Supreme Court, Sharp authors 459 majority opinions. One is a 1964 decision upholding the right of a theater owner in Fayetteville to have arrested and prosecuted three Black men who dared to sit in the whites-only orchestra section rather than in the balcony after a white man purchased tickets for them. 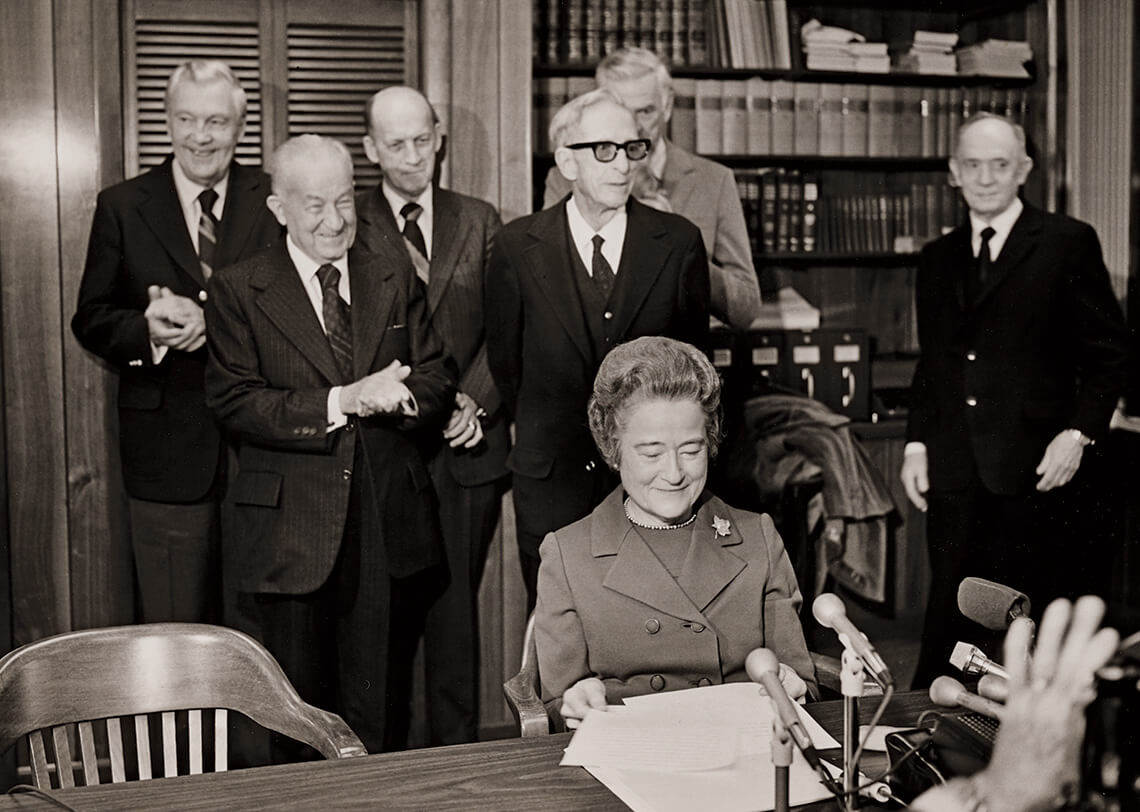 In 1973, she answers a student query: “At one time in my life, when I was much younger, I was violently opposed to capital punishment. After I went on the bench and my experience broadened I began to change my mind. Under the conditions prevailing today, I think we should carefully weigh the consequences before we abolish capital punishment for first-degree murder and rape.”

Yet that same year, she joins Chief Justice Bobbitt and Associate Justice Higgins in challenging a majority opinion upholding the death penalty in the case of a convicted rapist, based on a recent U.S. Supreme Court ruling invalidating it as “cruel and unusual punishment” prohibited by the Constitution.

She writes that “were I to permit my personal views on capital punishment as a State policy to dictate my decision in this case, I would have voted with the majority.”

Following the law without regard for her personal views becomes her trademark, and her legacy thus is surprisingly progressive.

In Hall v. Wake County Board of Elections, she upholds, under certain conditions, a student’s right to vote where she is attending college.

And in an exhaustively researched and lengthy opinion in Smith v. State, Sharp upholds the Appeals Court’s decision to allow the superintendent of Broughton Hospital, terminated three years before the term of his contract expired, to sue for lost wages — seriously limiting the traditional doctrine of state sovereign immunity.

Through unrelenting hard work, she has used her keen intelligence and political savvy to create a pathway for other women to follow.

She takes a hard line on judicial misconduct, ruling that ousted District Court Judge Linwood T. Peoples would not be allowed to take office as a superior court judge, and that other sanctions would be imposed. Sharp notes that “it would indeed be a travesty if a judge could avoid the full consequences of his misconduct by resigning from office after removal proceedings had been brought against him.”

When Susie Sharp retires in 1979, women lawyers and judges are no longer a novelty. Through unrelenting hard work, she has used her keen intelligence and political savvy to create a pathway for other women to follow — stalwartly maintaining that being a woman was an advantage, not a hindrance, to her success.

Former Chief Justice James G. Exum Jr. tells her biographer, Anna R. Hayes, “She was impartial. She was dispassionate. She did the job the way they expected it to be done, and she was good at it.”