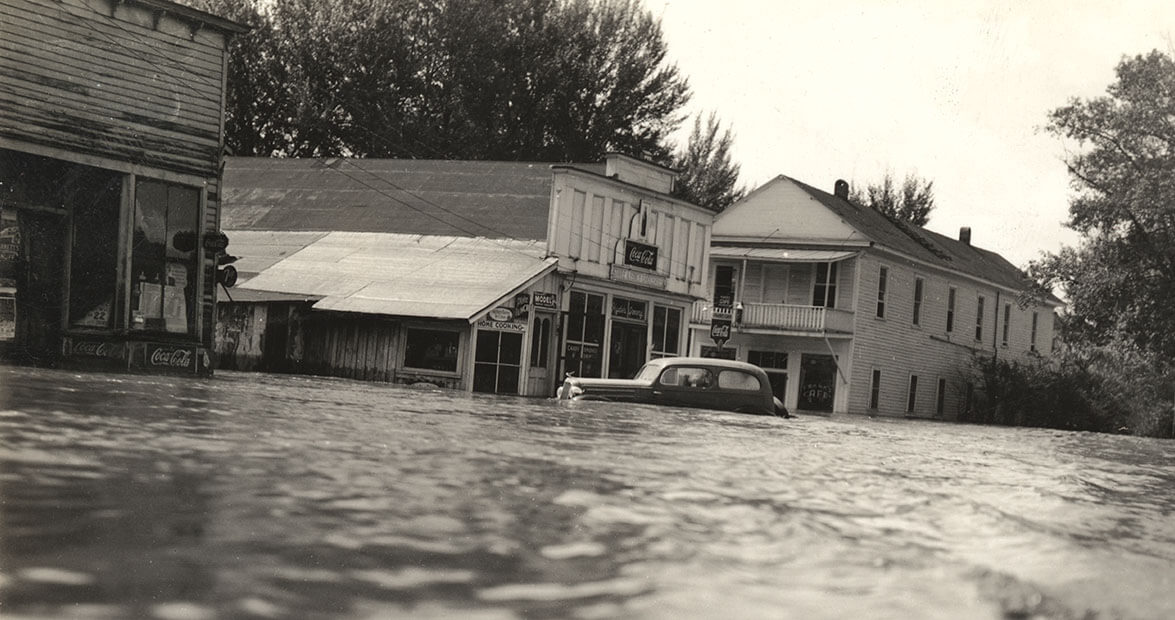 The southeast hurricane barrels into Beaufort, South Carolina, on August 11, 1940, as a Category 2 storm with sustained winds of 85 miles per hour. It moves inland into Georgia, then unpredictably hooks north along the Appalachians and churns into North Carolina from the west, bringing five days of unrelenting rainfall.

The hurricane is the latest in a series of storms that have already dumped more than 21 inches of rain on the mountain region during the month of August. Downtown Boone is submerged in muddy water after eight inches of rain fall in just 48 hours. Elsewhere, the water comes all at once in torrents.

Just east of Boone, and southeast of Deep Gap and the partially completed Blue Ridge Parkway, water is sluicing down steep mountainsides into the two prongs of Stony Fork Creek — toward the home of Zeb Greene, one of many Greenes living in the small, scattered community of Stony Fork. Here, houses perch on stone foundations, often with small gristmills along creeks in the low, flat ground between hills. Zeb’s two-story wooden house was built by his father, David, in the 1850s on a foundation of chestnut logs laid on creek and pasture rocks. Zeb’s brother Elster lives within hailing distance.

At home with Zeb are other relatives who are stranded there by the rising creek as night falls: Worth and Lucy Greene and their 1½-year-old daughter, Betty, and Lucy’s first cousin Nina Todd, 15. Just last night, Nina harmonized with her cousin Beulah Greene, singing the hymn “I Would Rather Have Jesus” at the Stony Fork revival, which was cut short because of the violent storms.

The howling early darkness is split by eerie flashes of lightning along the course of the flood and a weird, low, electric light. And over the slamming rush of the rain can be heard another sound: a rumble like thunder, first erupting in punctuated bursts, then sustained in a long, trembling roar. It is the sound of mountainsides falling — great landslides hundreds of feet wide, the overburden of soil saturated by continuous rain and loosened by the big timber outfits that have clear-cut the old-growth forest, whose roots once held soil to bedrock. Now the ridges break away in massive avalanches of earth, rock, and timber weighing thousands of tons and moving at speeds up to 40 miles per hour.

Because the slides erupt out of the darkness, their victims can’t see them coming; they can only hear the earth-shaking roar when it’s too late.

In southeastern Watauga County alone, more than 600 landslides sweep down into creeks and across roadways, burying houses and other buildings, destroying railroad tracks, cutting off entire communities from the outside world, and killing 12 people. As many as 200 more slides descend on southern and central Watauga.

By 9 o’clock, the rain is lashing Zeb Greene’s home in horizontal sheets. Zeb ventures onto the front porch, accompanied by Worth Greene and Nina Todd, to see about moving the hogs to higher ground — in many of the little valleys, anxious farmers are turning out their livestock to fend for themselves. The onrushing wall of water catches the three by surprise, and carries away Zeb and Nina. From his front porch, Elster Greene can hear his brother’s panicked cries, but he is powerless to rescue him. 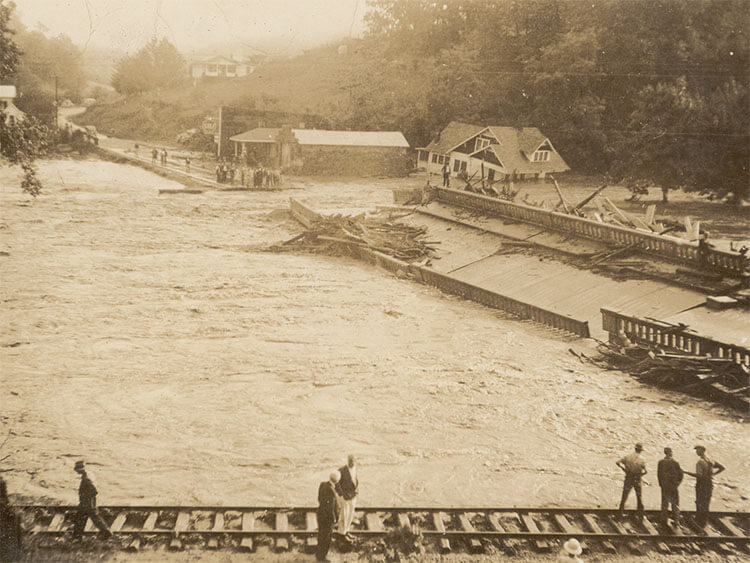 The Tuckasegee River topped its banks in Cullowhee, wiped out the Old Cullowhee Road bridge, and destroyed a lumber company’s rail spur. photograph by The Collection of Hunter Library, Western Carolina University

Worth leaps from the porch into a nearby cedar tree and waits out the night there as the flood swirls below in the pitch darkness.

Worth’s wife, Lucy, carries the baby, Betty, upstairs, and the two survive the long, tumultuous night. In the morning, a foot and a half of mud and water cover the floors of the ruined house. Betty is reminded of that calamitous night her whole life. She recalls, “Mama felt guilty the rest of her life that Nina, her first cousin, died, because she and Daddy had gone to get Nina to come sing at the revival at Stony Fork Baptist Church.”

Nina Todd’s body is found, half-buried in river mud and sand, more than 20 miles away, not far from Zeb’s body — both carried clear across the Yadkin River by the force of the flood. She is identified by the belt she was known to be wearing and her wristwatch.

Ivery C. Greene, a neighbor from Deep Gap who survives, writes, “The flood came like a thief in the night — suddenly, unexpected by everyone.”

The house of her father, John D. Cook, where she grew up alongside three sisters and seven bothers, is demolished by the raging flood of water and mud. Luckily, the family has been evacuated, but a prized heirloom — a 100-year-old spinning wheel — is destroyed. Ivery writes, “Now it is a place of sadness and desolation, a pleasant spot in memory only.”

Elsewhere in Deep Gap, another tragedy is playing out — four homes within half a mile of each other are crushed by landslides. At the home of Andrew and Eliza Greene, the family has just finished evening prayers. The avalanche of earth and trees tears the house from its foundation and tumbles it over three times, demolishing it. Their neighbors, the Vernie Greene family, witness the calamity, as Ivery chronicles soon after: “The whole family were standing on the front porch listening to the roaring of the waters and watching the nearby streams rise higher and higher every minute. They heard the screams of those who went down to their deaths.”

Andrew, 46, is carried three miles, and his body is deposited near a large oak tree. “His right hand held onto a piece of an iron bedpost in a death grip.”

His wife, Eliza, is caught fast in a drift of logs, sand, and debris, in water up to her hips. She struggles free, losing her shoes, and climbs atop a higher drift for safety. “There I sat all night,” she recalls, “calling for help and hoping someone would rescue me.”

Her youngest son, B.L., age 7, can hear her calling. He was asleep in an upstairs bedroom when the slide struck, and when he regains consciousness, he’s caught in a clog of debris 50 yards downstream from his mother, dazed and bruised, his face caked with mud, but otherwise unharmed. In the morning, he crosses a swollen creek on a downed tree to reach his uncle’s house, where he walks in on breakfast. “No, I wasn’t a bit afraid,” he says. “Didn’t even cry, either. There were pretty little lights around me all night and I could hear Mama, not far above me, calling for somebody.”

Eliza and Andrew’s son Hooper, 19, is caught up on a bush and holds on through the night. He hears his sister Velma Lea, 14, carried past him, screaming. His other two sisters, Creola, 16, and Vernita, 12, also drown. Eliza is not allowed to view their broken and disfigured bodies. She laments, “If I could have seen them and but touched their faces and hands one more time, I could have stood the loss better.” 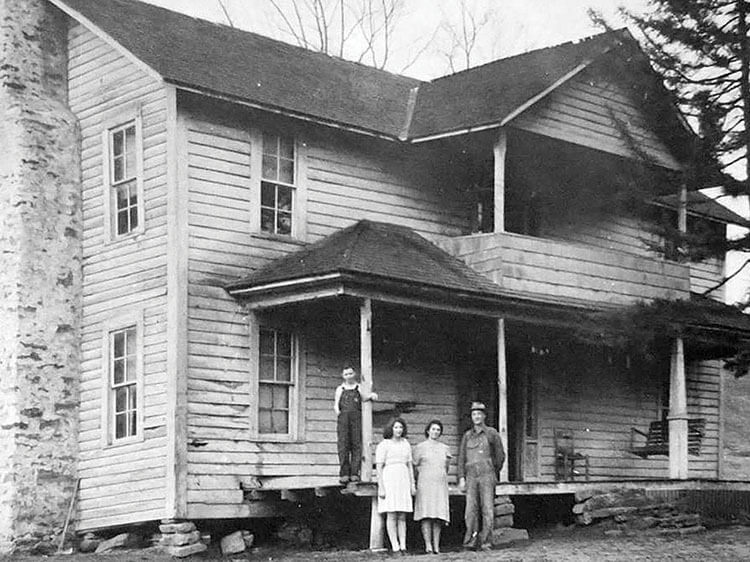 The Elster and Zera Greene family, and their home in Stony Fork, survived the flood. The house still stands and remains in the family. photograph by The Greene Family

Three days later, four caskets are lined up at the foot of the pulpit of their church as the choir softly sings the girls’ favorite hymn, “I Feel Like Traveling On.” In bright sunshine, the three brown-haired, blue-eyed daughters are laid to rest with their father in a single common grave heaped with flowers.

The Sylva Herald & Ruralite records other deaths, including those of the McCall family in Jackson County. As a landslide engulfs their house, it “carried Mrs. McCall across the raging creek where she caught the top of a tree and saved herself.” The body of the McCalls’ 5-year-old son washes up on an island near Bryson City — almost 60 miles away. But Albert McCall and the couple’s other child are never found.

Near Grandfather Mountain, the cab crew of Engine 9 is flagged down as they are heading up the long grade to Cranberry Gap. They back the train downhill toward town, but another washout forces them to abandon their locomotive. There will be no more trains running on that line — the great flood has cut off rail service to Boone for good.

Other western counties suffer as well. The Skyland Post of Ashe County reports that “nine bridges over the New River in the county were either partly or totally washed away, and several bridges over creeks were moved by the terrific force of fast running water.”

In Lansing, Big Horse Creek overflows and floods the Norfolk and Western railroad station. It takes more than a month to repair the tracks and restore service. Some 30 homes and 50 barns are swept away, and more than twice as many homes are damaged. The crop fields of as many as a thousand farms are inundated.

Floodwaters overwhelm the power station at the Hamby Dam in Warrensville, washing part of it away.

The French Broad wipes out the bridge in Marshall. Along the rampaging Tuckasegee, wooden bridges are swept away, and so is the steel span in Dillsboro. The Watauga River — cresting, like the Yadkin, at six feet above the record set by the 1916 flood — washes out bridges in Cove Creek and Valle Crucis. The torrents of rain turn Grandfather Mountain into a gigantic waterfall, and the Watauga sweeps through the settlement there, carrying most of it away. The power plant downriver in Shulls Mills — the first in the county — is wrecked.

South of Grandfather Mountain in Caldwell County, in the rugged, remote Pisgah National Forest, Wilson Creek careens through its steep-walled gorge with alarming force toward the small community of Mortimer. The town was hastily constructed in 1904 to house about 800 employees of the Ritter Lumber Company’s timber and sawmill operation, plus a textile mill. Ritter shut down its timber operation in 1916, after Wilson Creek flooded and wiped out the railroad — but not before clear-cutting old-growth timber between Wilson and Steel creeks, and, in the process, stripping the mountainsides of the cover that held the earth in place.

By 1940, Mortimer includes homes, a smithy, a school, a church, a movie house, and even a hotel — the Laurel Inn. It is also home to Civilian Conservation Corps Camp F-5, which has taken over the warehouse buildings. Then, on August 13, Wilson Creek engulfs the creekside town with a flood cresting at 94 feet — and Mortimer never recovers.

The disaster goes down in history as the Great Flood of 1940, but it’s really many floods: of the Watauga, Yadkin, Little Tennessee, Tuckasegee, New, and French Broad rivers. Of Stony Fork Creek and Linville Creek and Swift Ford Branch and a hundred other creeks in Watauga, Ashe, Wilkes, Haywood, Caldwell, and other mountain counties.

It is a great deluge not just of water, but also of earth, as if the mountains themselves are dissolving into a cold lava clotted with boulders and stumps and green trees and the wooden bones of broken barns and houses — and too many bodies of innocents caught unawares in the dark of night, carried off from their homes by this rampaging creature of storms, this devastating legacy of clear-cut mountainsides, this nightmare come true.