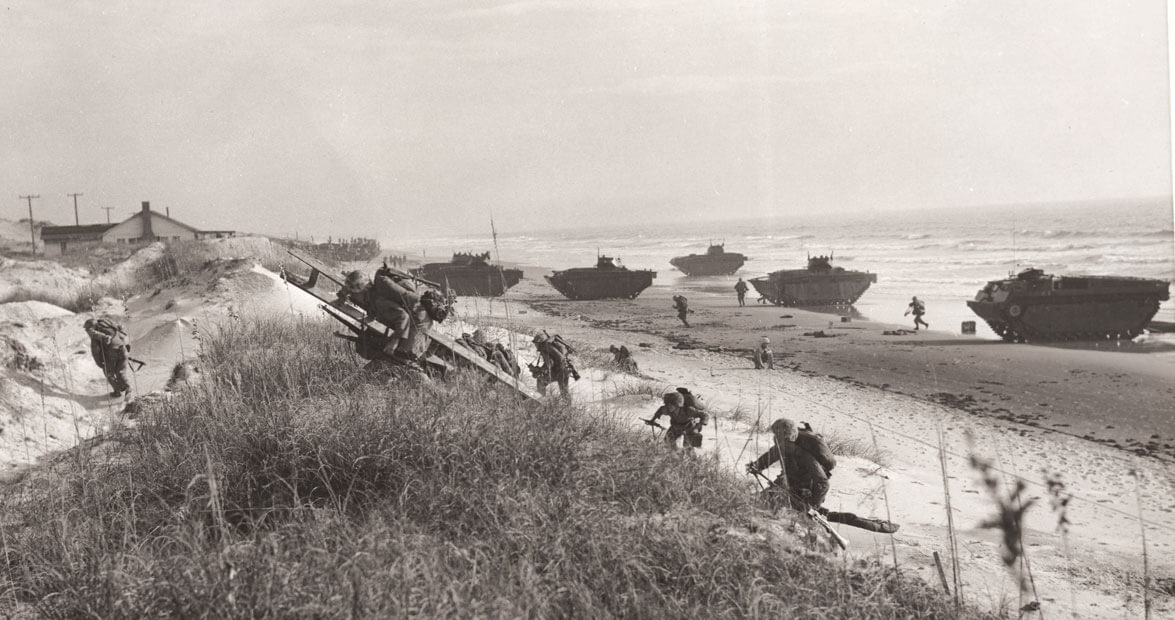 In the summer of 1940, the Marine Corps embarks on a critical mission: to find a site for a new base. The criteria are straightforward: It must be big enough to accommodate a sizable force, isolated enough to practice maneuvers and live firing of heavy weapons, and, above all, it must have extensive beaches on which to perfect the dangerous mission of amphibious assault.

For the search, the commandant of the Marines, Maj. Gen. Thomas Holcomb, sends Maj. John C. McQueen and a pilot to conduct aerial reconnaissance from Norfolk, Virginia, clear down the Atlantic Coast and along the Gulf Coast as far as Corpus Christi, Texas. At Onslow Bay on the New River, they survey 14 miles of undeveloped beaches and a large expanse of coastal pine forest and swampy wetlands, near what would become the Marine Corps Air Station at Cherry Point. Marines must train in tangled thickets, wade through mucky swamps, and contend with mosquitoes, bears, alligators, and several species of venomous snakes.

It turns out to be the perfect proving ground for both amphibious assault and jungle fighting.

The new base encompasses 174 square miles — but it’s not quite as empty as it looks from the air. Just as families have been removed from the Little Tennessee River Valley to make way for Fontana Dam and Lake, and from the countryside around Fayetteville to form Fort Bragg, some 2,400 people are displaced to make way for the Marines. By April 1941, construction gets underway — 8,000 civilian workers labor in the humid heat to build what is first called simply Marine Barracks New River.

The base commander, Lt. Col. W.P.T. Hill, sets up headquarters at the Gurganus Farmhouse, a two-story clapboard structure. A tobacco barn serves as a warehouse. An advance detail from the 1st Marine Regiment settles into a hotel and cottages on Paradise Point.

In less than two months, workers lay eight miles of railroad tracks to connect the base with the Atlantic Coast Line in Jacksonville. Equipment, supplies, and construction materials now flow into the base, and soon combat-ready Marines will ship out for war on trains bound for Wilmington and ports of embarkation on the West Coast. In September, the First Marine Division under Brig. Gen. Philip H. Torrey moves into a tent camp.

The base takes shape in four phases: In phase one, the tent camp is laid out and the naval hospital at Hadnot Point is built, along with the Division Training Area. In phase two, engineers dredge channels in the New River and add piers, roads, and athletic and recreational facilities. In phase three, barracks are added for the Montford Point Marines and the Women’s Reserves. By the end of phase four — which continues the addition of buildings and the expansion of training grounds — the base can accommodate more than 40,000 Marines.

From the start, New River is used for advanced infantry training for Marines who have completed seven weeks of rigorous basic training at Parris Island, South Carolina, or San Diego. By 1943, engineering and field medical schools are on site.

Alone among all Marine bases, it provides training for Marine Corps Women’s Reserves — nearly 19,000 of them during the course of the war. They arrive in Wilmington as civilians, 500 at a time on troop trains. From there, they ride the Atlantic Coast Line to Camp Lejeune, where buses carry them to spartan brick barracks. They sleep on rows of bunks in open “squad bays” and use communal showers, then are roused by reveille at 0545 hours for an intensive training program of close-order drill, physical conditioning, classroom instruction, and demonstrations of gunnery, hand-to-hand combat, heavy weapons, and landing craft. Specialist schools train the women as radio operators, drivers, mechanics, clerks, and quartermasters. Initially, some of the male drill instructors deride them, but soon, the women’s determination and competence win them the respect of many.

For more than a century and a half after its founding in 1775, the U.S. Marine Corps’ mission was to provide security aboard Navy ships, to seize and defend advanced naval stations, and to fight as an agile expeditionary force in hot spots around the world: China, Nicaragua, Haiti, the Philippines.

In the Great War, Marines fought in several massive pitched battles, most famously at Belleau Wood. There, they stopped the German advance 30 miles from Paris at a cost of almost 10,000 casualties — more than the Corps had suffered in its entire history to that point. Some said the Germans called them teufel hunden — Devil Dogs. The name stuck.

By the 1920s, war planners focused the Marines’ mission on the far-flung island stations in the Pacific — naval fueling depots and, later, airfields that would become crucial in any campaign against the Japanese. And with this new focus comes another: amphibious assault.

The problem of getting troops ashore alive and in fighting shape in the face of a fortified enemy has long proved a conundrum. In the landing at Daiquiri during the Cuban campaign of 1898, facing no resistance ashore, soldiers and mules drowned simply trying to get to the landing quays. At Gallipoli in 1915, Australian and New Zealand troops attempting to land were slaughtered in the face of Turkish guns.

This is the problem that a few visionary Marines set out to solve — led by Maj. Gen. John Archer Lejeune, commandant of the Marine Corps during the interwar period between 1920 and 1929 — as lessons learned in the Great War combine with new technology and the emerging role of aviators. Ships can fight with their multiple-caliber guns. Marines ashore can maneuver and fight using all the weapons in their arsenal. But Marines in transit from ship to shore are vulnerable to long-range fire, artillery, underwater mines, and aerial attacks — all from an enemy they cannot readily fight. The mission is to get as many of them ashore as quickly as possible — alive and well-equipped — to join the battle.

General Lejeune now defines the Marines first and foremost as an amphibious force. With a cadre of like-minded officers, he sets about testing landing craft and devising methods by which Marines work in conjunction with naval beach parties in charge of the landing boats, coordinating their assaults with covering fire from the air or naval ships stationed offshore to soften up the landing zone. Once ashore, Marine shore parties take over to unload supplies from landing craft and move them off the beach, round up stragglers, and secure prisoners.

The tactics are not perfect — assaulting Marines are still at the mercy of weather and tides, unseen underwater obstructions such as coral reefs, errors in planning, and, always, enemy fire.

In November 1942, General Lejeune dies — and the base is named in his honor a month later: Marine Barracks Camp Lejeune. For some years, there is debate about how to pronounce the name correctly. In 1950, Miss Eugenia D. Lejeune, daughter of the late Lieutenant General Lejeune and a veteran of the Women’s Reserve, settles the matter: She explains to a local newspaper that the name is not pronounced “Le June” but “Lerzhern.”

By the time Pearl Harbor is attacked, inspiring 18,000 new recruits, the active-duty Corps numbers some 66,000 Marines — all white. By war’s end, it will include almost 10 times that number. The much larger Army maintains segregated units for black soldiers, the Navy restricts their duty to the mess hall, and the Marines do not enlist them at all. But in the face of early Japanese victories in the Pacific, every branch of the service needs more men.

In February 1942, the General Board of the Navy directs General Holcomb to determine which assignments could be carried out by black Marines. In April 1942, President Roosevelt directs Secretary of the Navy W. Frank Knox to enlist blacks in every branch of the naval service.

Under pressure from the General Board, headquarters organizes the 51st Defense Battalion (Composite) of infantry, coastal artillery, anti-aircraft, armored, and maintenance personnel. By summer, 900 black Marines, ages 17 to 29, from California to the Carolinas, are recruited for training at a segregated facility attached to New River Barracks,  on a peninsula jutting into the New River called Montford Point.

There, they complete basic training, then learn marksmanship, gunnery with heavy weapons, how to deploy and operate tanks and artillery, and a variety of other supporting skills. As a defense battalion, the 51st will be expected to operate independently, holding remote island airfields against Japanese attack, and its mission requires that it be self-contained and flexible, able to cover any contingency of assault from the air, land, or sea. Specialist support units — such as ammunition companies — can also expect to serve attached to assault forces.

Their officers are all white, as are their drill instructors (DI). But by 1943, black DIs rise through the ranks and take charge of training. Recruits thought that would be good, but they find that black DIs are tougher because they were determined to make the young Marines successful, to be even better than their white counterparts.

Soon, a second battalion is added, the 52nd, and in 1944, both units find themselves deployed to the Pacific Theater.

The First Marine Division ships out in the summer of 1942 for combat on Guadalcanal, Peleliu, and Okinawa — three of the fiercest battles of the war. At Peleliu alone, in six weeks of sustained combat, more than 1,200 Marines are killed in action — including men from two companies of Montford Point Marines. After the war, the First Division moves to Camp Pendleton, California.

The 51st deploys first to the Ellice Islands and then farther north to the Marshall Islands, to guard airfields and staging bases. Four companies from Montford Point hit the beach at Iwo Jima with the first assault waves and are pinned down for hours under withering fire before advancing inland.

The 52nd is deployed to Guam for patrol action, where it remains until the Japanese surrender.

More than 2,000 Montford Point Marines take part in the Battle of Okinawa, just 400 miles south of the Japanese home islands. After the surrender, nine companies of black Marines deploy to Sasebo naval base, just north of Nagasaki, to help clear the monumental scorched wreckage left in the wake of the second atomic bomb. Soon afterward, the companies of the 51st and 52nd are deactivated one by one until, by the end of 1947, the last are gone. A year later, President Harry Truman orders the services desegregated. In 1949, Montford Point is decommissioned. From now on, black recruits will train at Parris Island or San Diego, with whites.

The Second Marine Division fights on Guadalcanal, Tarawa, Tinian, and Okinawa — all crucial, savage battles to seize air and sea bases for the eventual assault on Japan. The Second Division joins the occupation forces in Japan for a short stint before returning home. From now on, its permanent base will be Camp Lejeune.

The base becomes an anchor for the Jacksonville community, a key part of its identity, and, unlike many other installations established in wartime haste and just as hastily decommissioned, Camp Lejeune endures as the “Home of Expeditionary Forces in Readiness.”