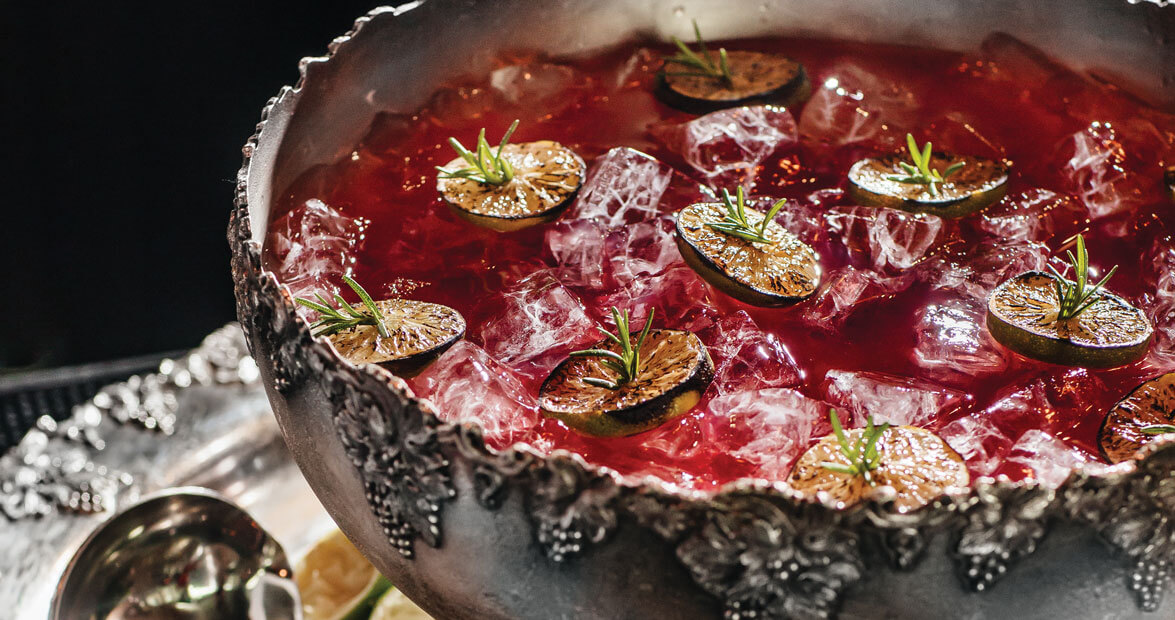 There’s punch, and then there’s punch. There’s the kind of punch that serious cocktail fans dismiss as “church punch” — fruity and frothy, with an iceberg of sherbet floating in it. Let’s be charitable and call it sweet. Very sweet. “That’s post-Prohibition punch,” says cocktail historian Robert Moss. Then there’s real punch: Classically, it’s a mixture of liquors and citrus, with just enough sugar and water to take out the sting.

When the classic-cocktail trend took off a decade ago with the rise of retro drink styles, punch — real punch — came back like a prizefighter springing off the ropes. Suddenly, every bartender sporting a boar’s-tusk mustache was pulling out his grandmother’s punch bowl and getting creative. At The Punch Room in Charlotte’s Ritz-Carlton hotel, Ryan Nolen, creative director of beverage operations, greets every guest with a daily punch, ladled from an elaborate bowl at the side of the bar. People love that it’s both a novelty and a classic, trendy and a throwback.

While the original fashion for punch disappeared in the rest of the drinking world for more than 150 years, it stuck around in the South much longer. Moss, who wrote the 2016 book Southern Spirits: 400 Years of Drinking in the American South, cautions that “punch was by no means what we think of as modern punch.” 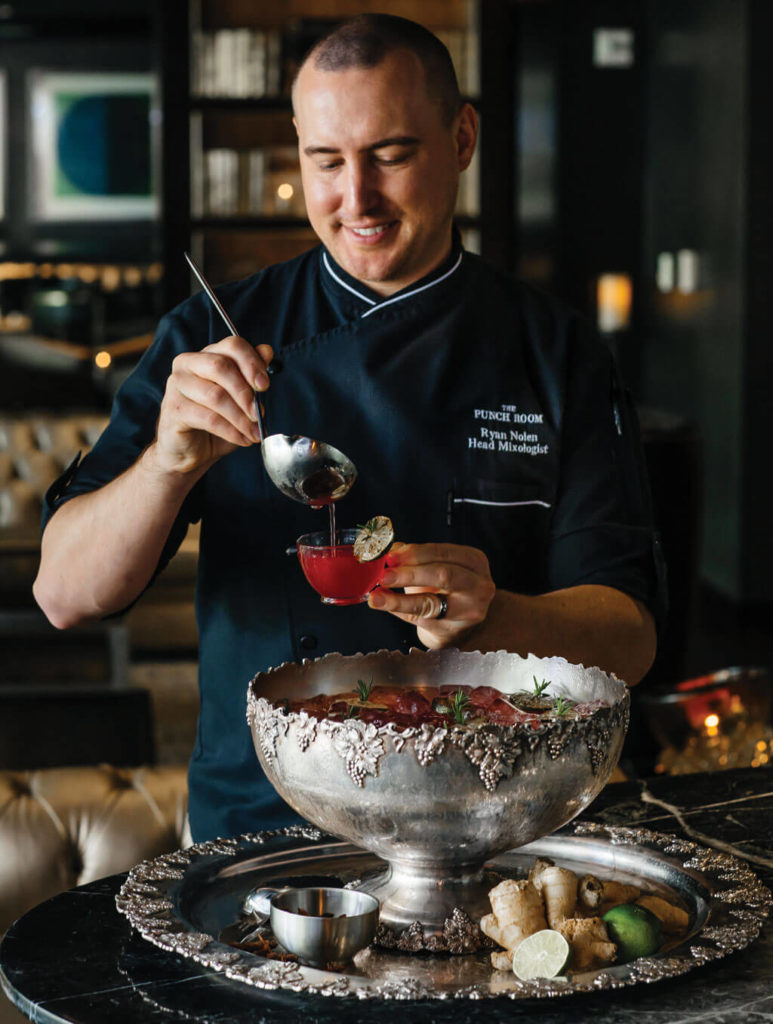 Ryan Nolen continues The Punch Room’s tradition of offering guests a cup of holiday cheer when they arrive. photograph by Tim Robison

Real punch originated in India, where British society drank it to keep cool in the tropical heat. Some punch histories claim that the name came from panch, the Hindu word for five, for the traditional five ingredients, although that may not be true — plenty of punch recipes had more than five ingredients. The classic formula, Moss says, was “one of sour [citrus], one of sweet [sugar], two of strong [meaning two parts liquor], one of weak [water or tea].”

This potent punch traveled back to England, then to the sugar plantations of the Caribbean, and on to America, where it reigned as the drink supreme until about the 1830s. “It was something you shared,” Moss says. “You went to a tavern, and all the taverns had big punch bowls.” Parties, holidays — punch was the drink.

Then along came the cocktail, mixed individually to order. Just the thing for a young nation founded on individual choice. “Punch got eclipsed by the cocktail,” Moss says. “It really fell out of favor.” Except in one area: the American South. Punch found friends here until well after the Civil War, when it got a following among militias. Every town had a militia — they were the civic clubs of their day — and every militia got together for musters, to practice skills and socialize. And musters always ended in parties: All that marching and drilling raised a thirst.

Punch was perfect. You could make a big batch and throw in as much alcohol — usually brandy and rum — as you liked. “They’re all basically a way of disguising liquor,” Moss says. Militia punches even garnered bragging rights. If you gathered with another town’s militia, you made the punch extra strong. As Moss puts it, “You’re trying to drink the fellow militia under the table.”

Punch moved on to more polite gatherings, like musical societies and balls. Punch bases of alcohol and sugar could be made in advance and allowed to ripen for a few days or even weeks, then mixed in a big bowl with ice and citrus and topped with champagne.

Prohibition was the death knell for real punch: People switched to sweeter, fruitier concoctions that attempted to cover the taste of poor-quality alcohol. Eventually, punch bowls got packed away, except at church halls and the occasional wedding, and punch was lost to obscurity. Until 2010, when David Wondrich came along with his book Punch: The Delights (and Dangers) of the Flowing Bowl, which introduced a generation of bartenders and mixologists to the old favorite. Cocktail consultant Bob Peters, who launched The Punch Room and made punch one of his signatures, is still an unabashed fan. Not only because of the drink’s balanced flavors and creative potential: “I really love the social aspect of it,” he says. “It’s like the office watercooler at a party. It provides interaction.”

There’s a reason that every holiday party had a punch bowl. “It’s a great place to start the evening, a way to ease into things,” Peters says. It’s also perfect for pacing: At the beginning of the night, the punch is strong, but as the ice melts, it gets weaker. “So people are drinking less alcohol as time goes by,” he says.

The punch craze has settled down a bit from the days when every bar with Edison lights and distressed brick had two or three punches on the menu. “To me, it’s another tool in the bag,” Peters adds. “It shouldn’t be spirit-forward like a cocktail. It should be harmonious, like a choir singing.”