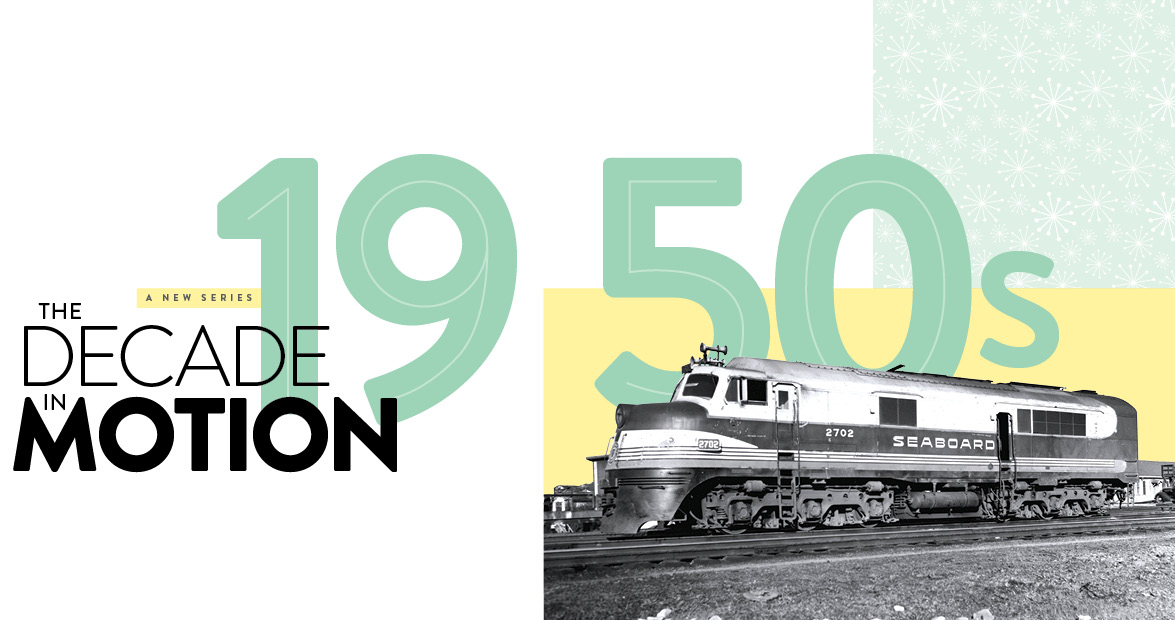 HERE IS MOVEMENT EVERYWHERE IN THE 1950s.

On the highways, crowded with a parade of big, shiny automobiles with wraparound windshields and space-age tail fins, the Sunday drive now becomes a family outing with no particular destination, the trip itself an event, the automobile the new emblem of freedom and mobility.

With gas rationing a thing of the past, the automobile comes into its own during the postwar boom. Three new national defense interstates, I-85, I-95, and I-40, take shape and advance into North Carolina — hundreds of miles of fast, four-lane freeways. Simultaneously, the state undertakes an ambitious program to extend and modernize its farm-to-market roads — 12,000 miles of new roads are built and another 15,000 miles are upgraded for all-weather travel. By mid-decade, these new highways support the fourth-largest trucking industry in the nation, home to more Class I motor carriers — tractor trailers — than any other state. Winston-Salem is home to the McLean Trucking Company, which advertises “the largest individually-owned trucking terminal in the world.”

And two new phenomena seem to bloom out of the landscape overnight: drive-in movie theaters, such as the Moon-Glo Theatre in Henderson and the Sunset Drive-in in Shelby, and drive-in restaurants, like Short Sugar’s Pit Bar-B-Q in Reidsville. Unlike the chains springing up across the country, the local places tend to serve homegrown favorites. Families drive the new interstates and freshly paved back roads in sleek sedans and station wagons to park and eat, to park and watch, and the car itself becomes part of the entertainment.

Automobiles bring tourists to the coast and the mountains — the auto vacation is the new luxury. Grandfather Mountain, privately owned by the Hugh MacRae family, has long been a star attraction for tourists visiting the High Country around Linville, Blowing Rock, Banner Elk, and Boone. Hugh Morton, MacRae’s grandson, inherits the property and begins working to make it more accessible — widening the road and building the most famous bridge in the state at its summit — a 228-foot-long suspension bridge popularly called the Mile-High Swinging Bridge. 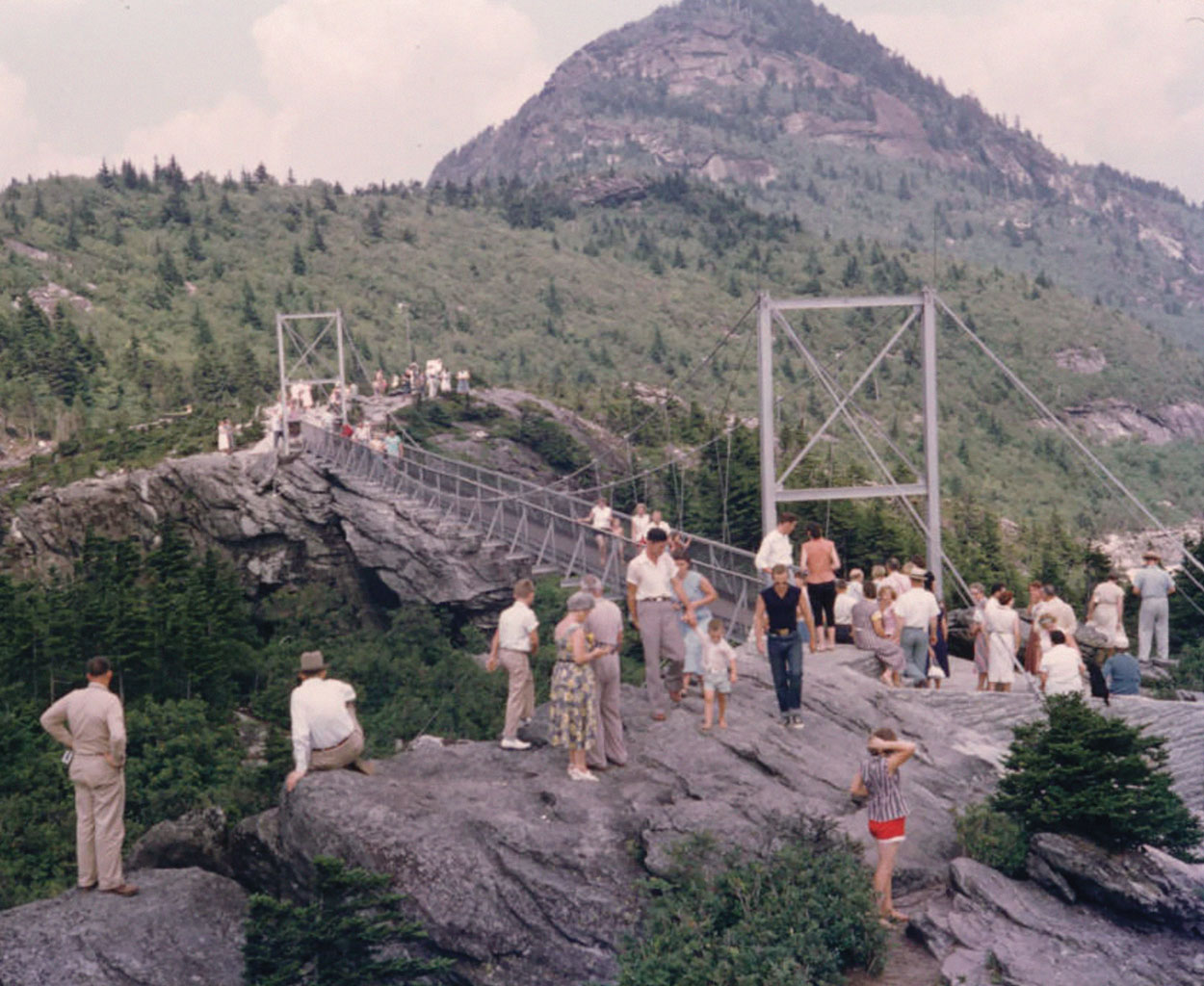 Familiar sights: The Mile-High Swinging Bridge at Grandfather Mountain became an instant tourist attraction when it opened in 1952. photograph by the hugh morton photographs and films #p0081

Morton, a conservationist and accomplished photographer, acts as a steward of the property, preserving its natural features and documenting its breathtaking vistas in his photographs. His mother, Agnes MacRae Morton, and Donald MacDonald cofound the Highland Games and bring the annual event to the mountain, where it becomes a three-day celebration of Gaelic culture, featuring dancing, piping, and fiddling; sheepdog demonstrations and genealogy research; and competitions in traditional Scottish games such as the caber toss, the hammer throw, and wrestling.

While the automobile is beginning to crowd out rail travel, for the time being, passengers can still enjoy a fast and luxurious ride on two rival carriers — the Atlantic Coast Line Railroad and the Seaboard Air Line Railroad — aboard streamlined trains pulled by purple, silver, yellow, green, and orange locomotives with names like Champion and Orange Blossom Special. And Piedmont Airlines, which launches its first flight from Wilmington to Cincinnati just before the decade turns, offers city-to-city service on its fleet of sleek silver, blue, and white DC-3 aircraft: New Bern to Louisville, Kentucky; Asheville to Roanoke, Virginia; and longer flights to Washington, D.C., and other big cities. 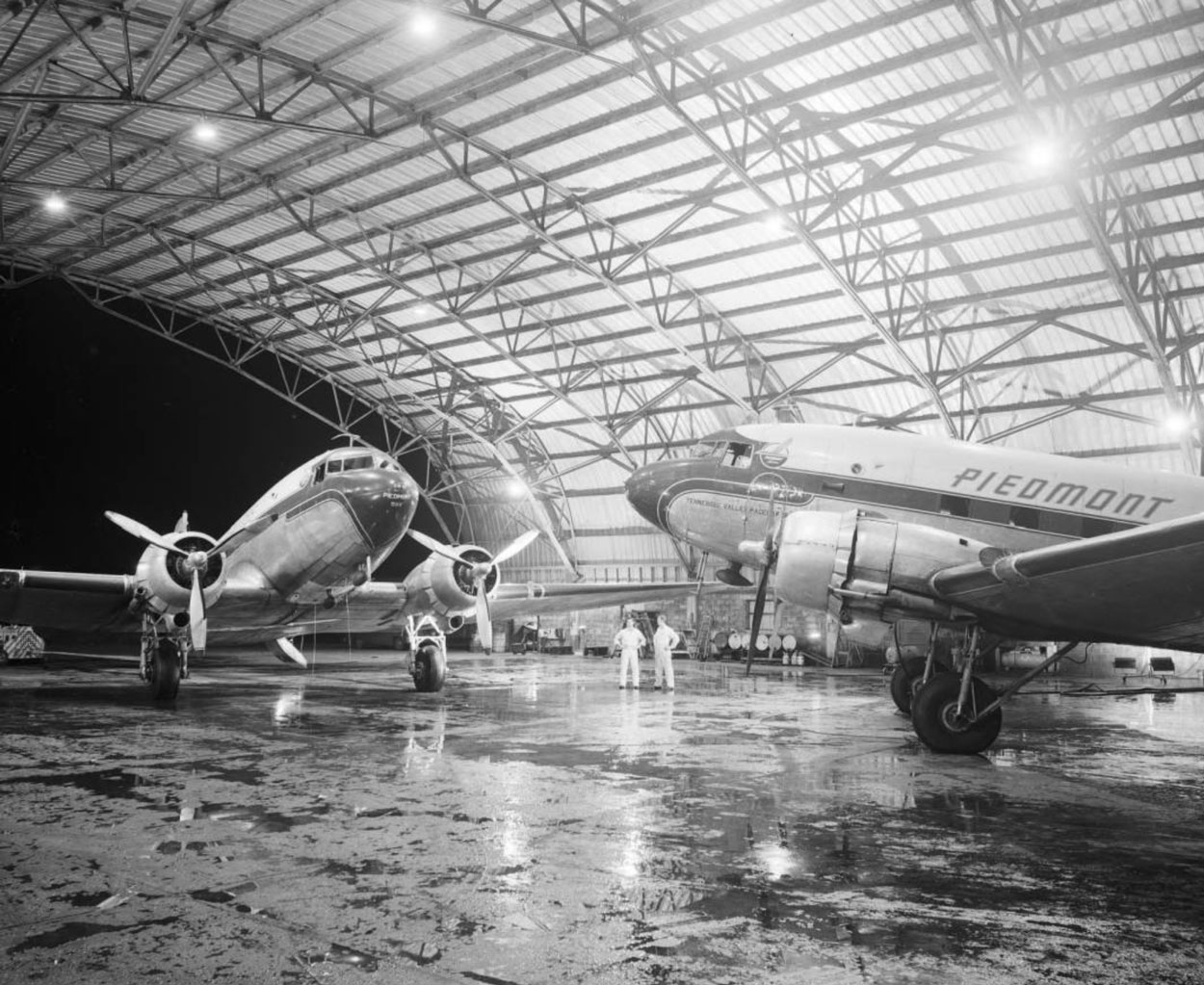 On a tract of land just north of Carolina Beach, stretching from the Cape Fear River across the peninsula to Myrtle Grove Sound, black families find entertainment and music. Segregation prohibits them from visiting white hotels and clubs. Besides the resort hotels on the water, more than 30 “juke joints” offer dancing to the hottest numbers on a jukebox. Some book live bands that play bebop, boogie, and swing music long into the night.

While black and white audiences are separated by law, their music is not. Carolina Beach “juke joint” owners soon stock the so-called “race records,” and beach music takes hold among white teenagers — a crossover that sets the stage for rock ’n’ roll. They dance exuberantly on juke-joint dance floors at Seabreeze and Carolina Beach, young couples — black and white — swinging to the hot new sounds of black entertainers like Amos Milburn (“Chicken Shack Boogie”), Paul Williams (“The Hucklebuck”), and Count Basie (“One O’Clock Boogie”).

Many of the decisive moments in the civil rights movement — which carries North Carolina inexorably into the future — play out during the ’50s. In 1951, following a court order, the University of North Carolina opens its graduate and professional schools to black students.

In 1954, the U.S. Supreme Court orders all public schools desegregated, but in North Carolina, the legislature concocts the Pearsall Plan to “moderate” the process, declaring in a committee report: “The mixing of the races forthwith in the public schools throughout the state cannot be accomplished and should not be attempted.” Doing so, the report said, “would alienate public support to such an extent that they could not be operated successfully.”

Nonetheless, a handful of black students enroll in Charlotte, Greensboro, and Winston-Salem schools. Meanwhile, seven black protesters occupy the white section of a Durham ice cream shop and are arrested. Black parents in Durham bring suit to allow their children to be admitted to the all-white high school. In February 1960, two years after the Rev. Dr. Martin Luther King Jr. delivers an inspiring speech in Greensboro, racial tensions come to a head when four students from North Carolina Agricultural and Technical College stage a sit-in at the Woolworth’s lunch counter there — and this effective form of protest is utilized by other activists across the South. This is the beginning, not the end, of the civil rights struggle in North Carolina.

In the southeastern corner of the state, the Lumbee Indians have long sought recognition as an authentic tribe. Their origin is poorly documented, and some recognized tribes place doubts on the Lumbees’ native descent — despite the findings of an anthropologist from the Smithsonian Institution who studies the tribe in the 1930s: He declares that they are of Siouan (Cheraw and Keyauwee) origin. Once known as the Croatan — after the Indians who lived on Roanoke Island when it was colonized by the English — in 1913, they are redesignated the Cherokee Indians of Robeson County.

At last, in 1953, the state legislature recognizes them as Lumbee — the tribe’s chosen name. The U.S. Congress confers its own recognition three years later — but also specifically denies the tribe any federal benefits.

The Lumbee continue to suffer harassment, notably from the Ku Klux Klan. In 1958, led by Wizard James “Catfish” Cole, the Klan stages a rally outside Maxton. More than 500 Lumbee Indians, many of them armed, descend on the rally and chase the Klan from the area in what becomes nationally famous as the Battle of Hayes Pond.

The University of North Carolina has long sought to extend its educational mission across the state through the establishment of campuses and centers. Now, it takes that mission to the airwaves.

Friday, assistant to the president of the consolidated UNC campus, hosts North Carolina People, which becomes the station’s signature — and longest-running — show. WUNC broadcasts from a tower in Chatham County, producing content in three locations: a renovated laundry in Greensboro, a converted dining hall in Chapel Hill, and a newly constructed studio in Raleigh. A retro-fitted Trailways bus serves as a mobile studio. Friday himself becomes president of UNC in 1957 and remains true to his goal of expanding the broadcast reach to all 100 counties.

In downtown Raleigh, the North Carolina Museum of Art opens on Morgan Street in 1956, occupying the former State Highway Division building. The museum is made possible by an astonishing act of cultural awareness: In 1947, the legislature appropriated $1 million to purchase 139 American and European artworks for the people of North Carolina — supplemented by 70 additional works purchased by the Samuel H. Kress Foundation. It’s the first major collection in the country to be funded by a state government.

With the scaling down of shipyards and other wartime industries, the state actively recruits new industry. Textile and tobacco are historically low-paying enterprises, and to prosper, North Carolina needs industries that can offer higher wages and attract educated young workers. The notion of a research center partnered with leading universities is first floated by Howard Odum, a UNC Chapel Hill sociologist, in 1952. An industry-recruitment delegation representing the state includes Romeo Guest, a builder and MIT graduate from Greensboro who was inspired by the research corridor established along Boston’s Route 128.

A look at the map reveals a triangle of farmland and pine forest formed in the space between Raleigh, Durham, and Chapel Hill — each point anchored by a major research university — and Guest coins the term “Research Triangle.” With leadership from the universities and business executives, by the end of 1959, the nonprofit Research Triangle Park is home to five companies, moving the state to the forefront of entrepreneurial innovation.

W. Kerr Scott wins election to the governorship at the turn of the decade with his slogan, “Go Forward with Scott.” In his inaugural address, he proposes using the state budget surplus to propel North Carolina toward transformational public improvements. By the end of his four years in office in 1953, he reports on just how much progress has “gone forward”: many new schools and a statewide school health program; new hospitals and a more comprehensive public health program; 75,000 new telephone installations in rural areas, along with thousands more homes electrified; thousands of miles of new paved secondary roads; and modern deepwater ports in Wilmington and Morehead City.

Some of the movement of the ’50s is retrograde, as the struggle for civil rights ignites a backlash in the streets and in the legislature. But in general, North Carolina becomes a much more urbanized state (all of that movement to the cities), and the population grows, even as out-migration increases — ambitious people taking advantage of their postwar freedom to seek better wages and more equitable working conditions in more progressive states.

By decade’s end, the state has reshaped itself on the foundation laid by the frenetic prosperity of the war years. It remains a work in progress — and that is its defining feature: progress.