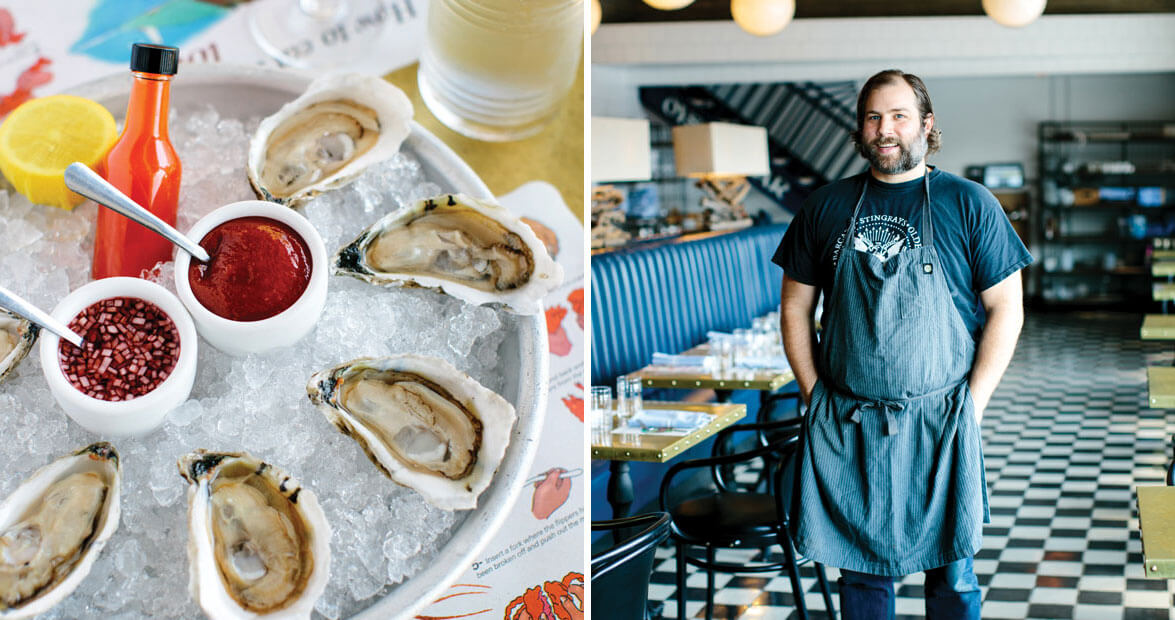 The buttermilk sky is just starting to roll in, and Chef Matt Kelly is on the phone. Again. Pacing the bar at Saint James Seafood, his newest restaurant, he checks in with his fishermen and his oyster growers: They’re all expecting the worst and have locked down their boats. “What more can they do?” Kelly asks with a helpless wag of his head. Here in Durham, Hurricane Florence has triggered a full-blown bread-and-batteries panic, but Kelly’s worry isn’t theoretical. It’s real, immediate. Closer to the heart. For him, the coastal community might as well be right down the street. “We had a clam guy who wanted to try to make it in today,” he says, amazed. “We told him not to; it was going to be 10 hours of traffic.”

A restaurant doesn’t stop, until it must. There are too many moving parts — human and mechanical and perishable — to pause the clockwork, even under threat of an epic storm. No one understands this better than Kelly, 42, whose five acclaimed eateries form a bright culinary constellation in Durham’s dining scene. All occupy sturdy old brick buildings that have long withstood wild swings of fortune and plenty of weather. These storefronts, now perked up with tidy awnings and painted trim, are as much destinations as they are symbols of a city redefined by its ambitious chefs.

Named one of the best chefs in the Southeast (four times) by the James Beard Foundation, Kelly is known for putting North Carolina ingredients into foreign service: as Spanish tapas at his restaurant Mateo and as French classics at Vin Rouge; in New York deli spreads at Lucky’s and in regional Italian dishes at Mothers & Sons Trattoria. He says that Saint James, named for both the patron saint of shellfish and the hospital where his grandfather once worked, is his first American restaurant. To be more precise, though, most of the gilled and glorious critters on the menu come from North Carolina waters. 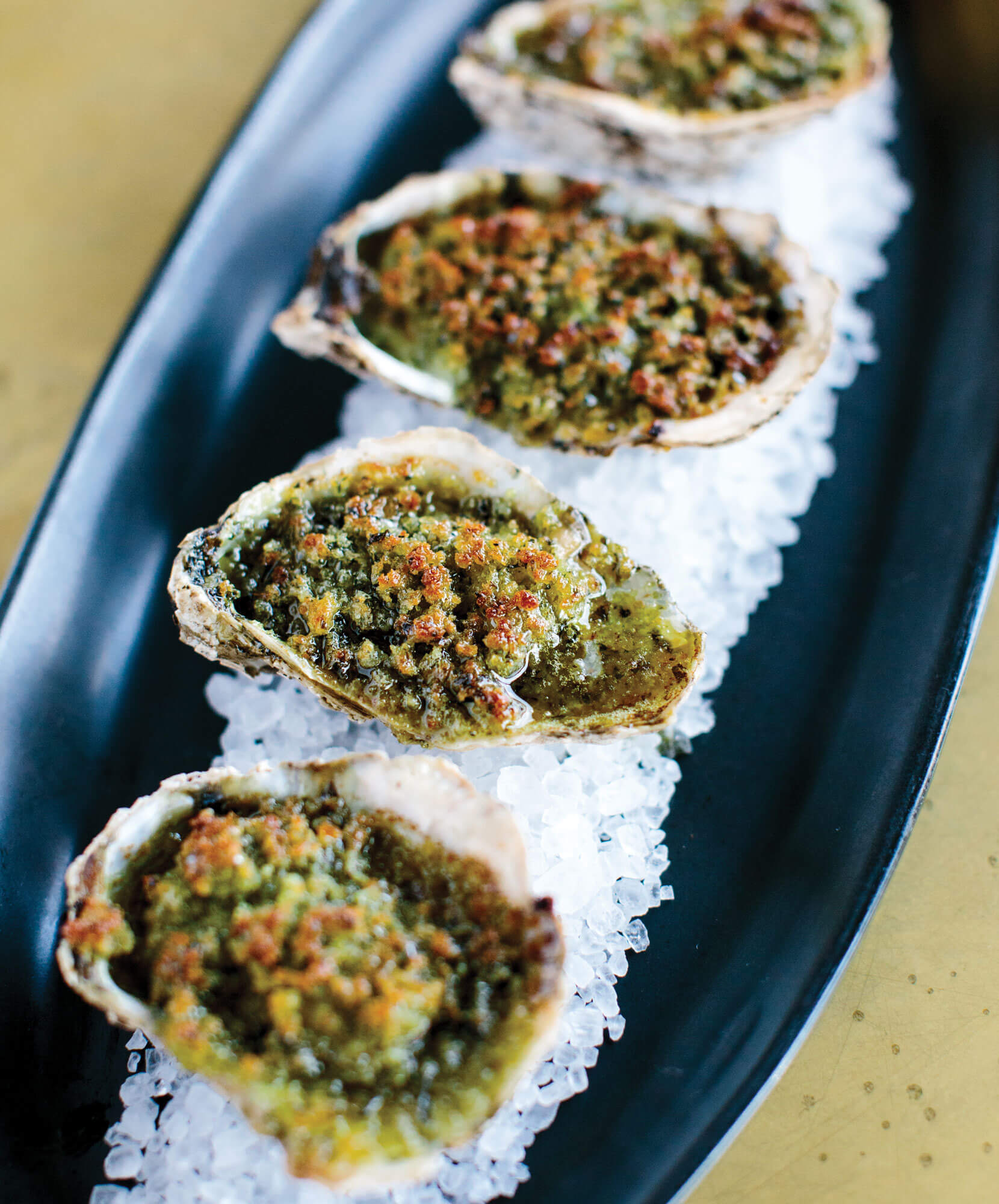 Most of the oysters on the Saint James menu are from North Carolina waters, including bivalves baked with bone marrow, mâitre d’hôtel butter, and breadcrumbs. photograph by Anagram Photo

Whatever happens to Kelly’s fishermen, to their boats and homes and families, will be felt here, 170 miles inland. Kelly wears this worry. Folding his arms over the design on his T-shirt, an outline of the state divided by our barbecue fighting words, “tomato” and “vinegar,” he says, “I’m hoping it will be fine.” It sounds more like a question. “I just keep thinking about how, when something bad happens in our community, people always come together.”

In 2005, when Kelly became co-owner of Vin Rouge, Durham’s dining scene was expanding, but its reputation was concentrated in two radiant points: Ben and Karen Barker’s Magnolia Grill and Scott Howell’s Nana’s. Back then, if you wanted a dozen oysters on any given day, your best bet was to slide onto a bench at the funky-smelling dive on Main Street, Fishmonger’s Restaurant & Oyster Bar. That is, until Kelly opened an oyster bar at his French bistro. “What happens at an oyster bar?” he asks. “People are talking. To each other — and about the oysters! It’s a communal experience.”

An easy sell to customers, but getting his hands on enough North Carolina oysters was always a struggle. For years, he relied on one guy who brought in hunks of Lockwood Folly oysters. Now, more than a decade later, Kelly’s got a local roster on the chalkboard. “There’s so much going on, and it’s happening so fast,” he says. “I feel like there are people growing oysters out there that I never knew about, like a tribe in the middle of the Amazon that you’ve never heard of.”

With the state’s oyster economy growing, Saint James came along at the right time. And in the right place. In 2017, Kelly and his partners opened the restaurant in the former home of Fishmonger’s, which had shuttered after 32 years. The Saint James menu draws from a lifetime of influences — from the lauded chefs to the church cookbooks — that taught Kelly how to cook and, more important, how to eat.

Growing up near Rochester, New York, dinner out was a rare treat, but Kelly’s father, an Air Force and commercial pilot, would bring live lobsters back on flights from Maine. Kelly’s mom would spread out newspaper, and the family hunkered down for some good old-fashioned boiled lobster carnage. “My mom would roll the legs to get the last of the meat,” he says. “We figured, we took its life — we wanted to get the most out of it.” At Saint James, the lobster stocks and lobster salt that flavor dishes bring that family dinner full circle. And the retro paper place mats on each table, illustrated with the steps for how to eat a lobster, might as well be pages torn from childhood memory.

When Kelly’s family moved to Raleigh in 1987, he found a new world of tastes and traditions, many of which have made it on to the Saint James menu: steam pots, shrimp and grits, Calabash platters. All of it is elevated, however, by an extra, inspired flourish. Even saltines, the sidekick of every smoked-fish dip, arrive at the table seasoned and fried. There’s plenty of New Durham sensibility, too: in the daily crudo, the oysters baked with bone marrow, the octopus with avocado. 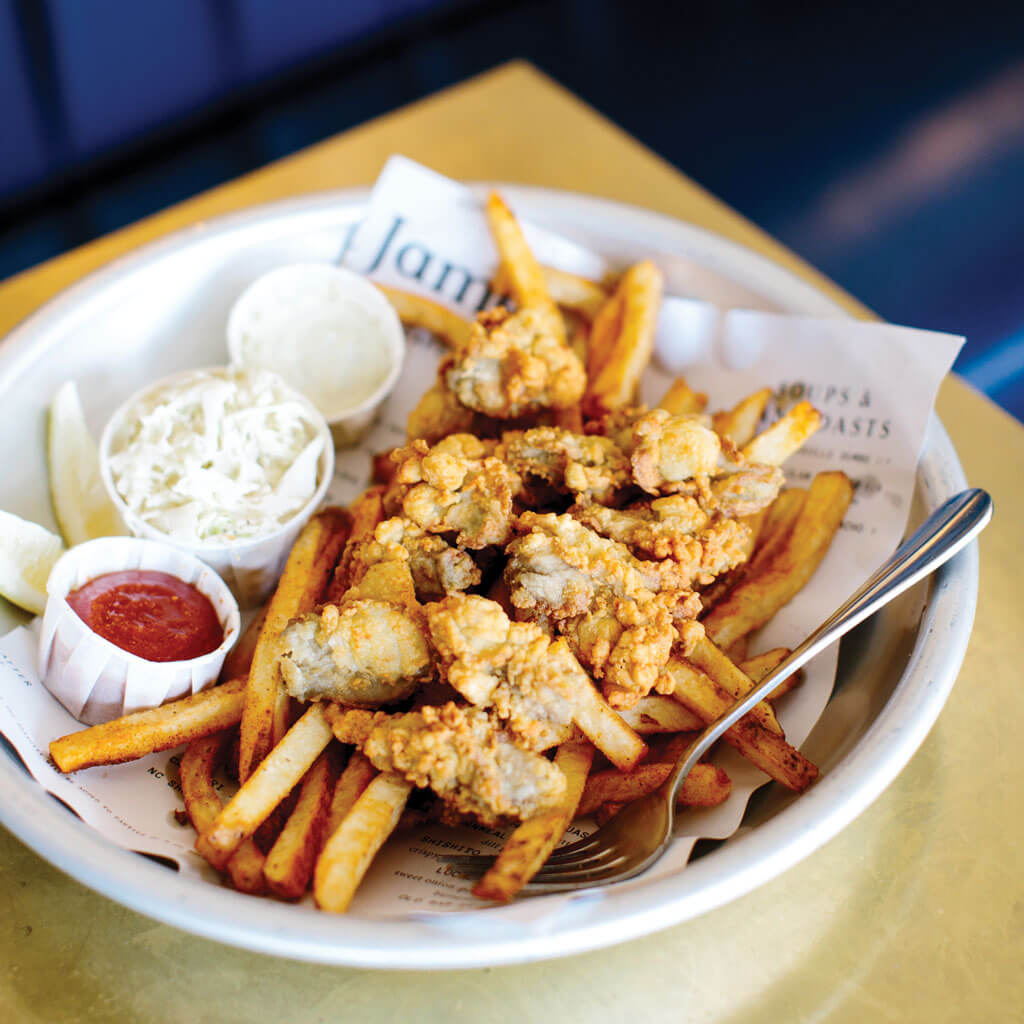 People who never knew the old Fishmonger’s may step inside Saint James and see only the gleaming brass tables (made by a Durham metalsmith), the spiffy white-and-navy decor. But those whose memories of shrimp baskets and raw oysters are rooted in an older version of Durham will recognize the original metal stairway, the massive plate-glass windows that look out on Main Street, and the black-and-white tile floor, still as chipped and chewed in places as a wild oyster shell itself. 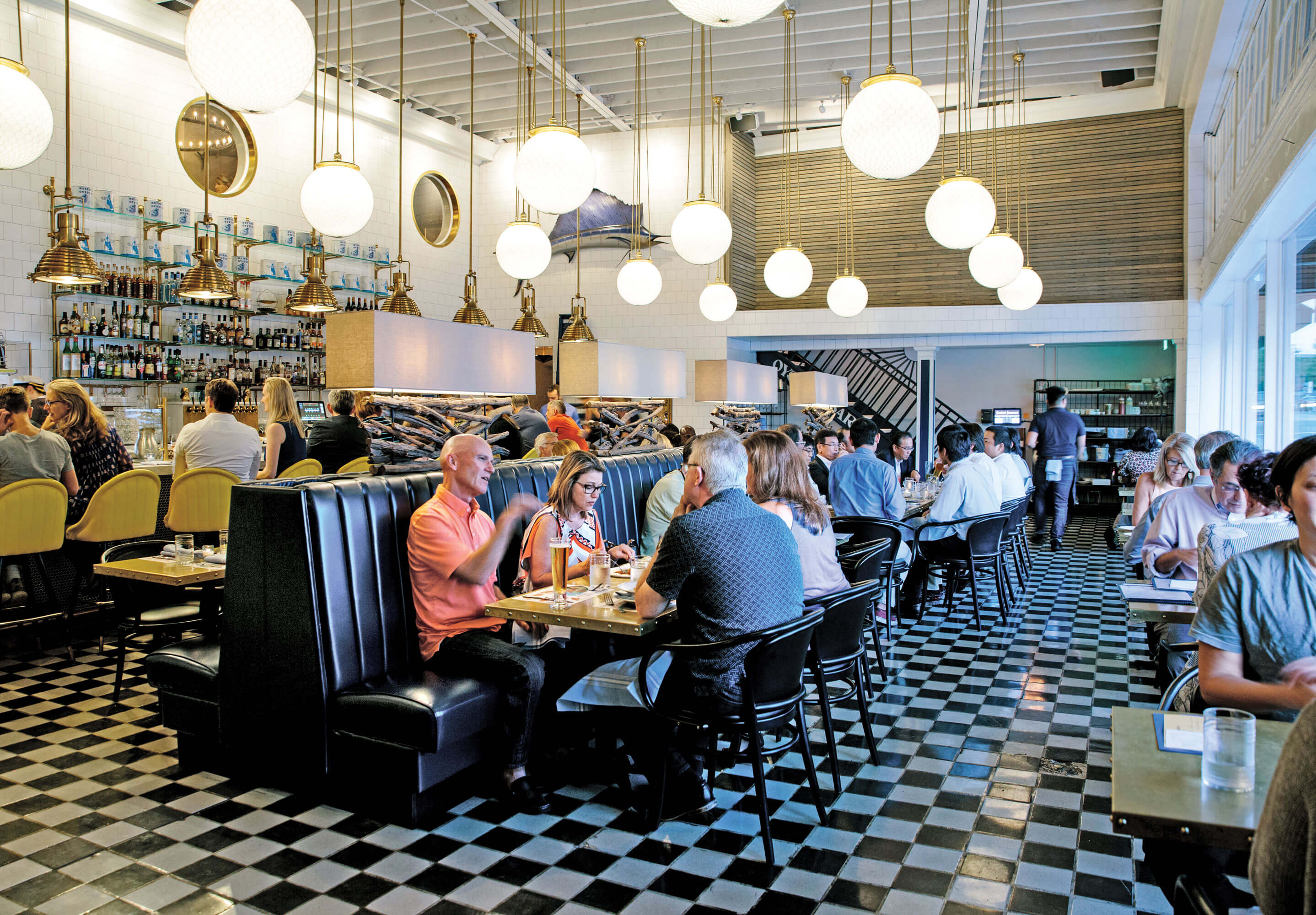 Diners at Saint James in Durham will notice that only a few details — the tile floor and the stairway — remain from the building’s days as Fishmonger’s. photograph by Anagram Photo

Florence sputters into Durham days late, swamps a few downtown streets, and retreats. Saint James stays dry. Kelly had a plan if he lost power, though, with pecks of oysters to polish off in a hurry: His friends would be well fed. Friendship and oysters have a lot in common, he says. Both require a certain level of trust. When someone gives you your first oyster, “one of two things happens.” His blue eyes crinkle; he likes what he’s about to say. “One: You find a new best friend, which is the oyster, and you have a wild love affair that lasts forever.”

And Two? Well, there is no Two. There’s only not One, because, really, nothing could be better than One. It was that way with Kelly’s first oyster. He was in second grade, in his uncle’s garage, sitting on an upside-down bucket, near an old fridge turned into a kegerator. His grandfather, who loved raw clams and oysters, was there, too, knife at the ready. Then out came the mollusks and the towels, and everyone started chipping away. “I put one in my mouth, and I’d never tasted anything remotely like it,” Kelly says. “I wasn’t sure I liked it, but I knew I didn’t not like it. The texture and the taste — it reminded me of getting knocked down at the beach.”

All of that from one little oyster.

At Saint James, there will come a time — countless times, if Kelly’s lucky — when some brave someone will have their first oyster. Lightning will strike. The memory will be cast: the place and the faces and the flavors of it forever vivid. And who wouldn’t want to be a part of that? Oysters make immortals of us all.