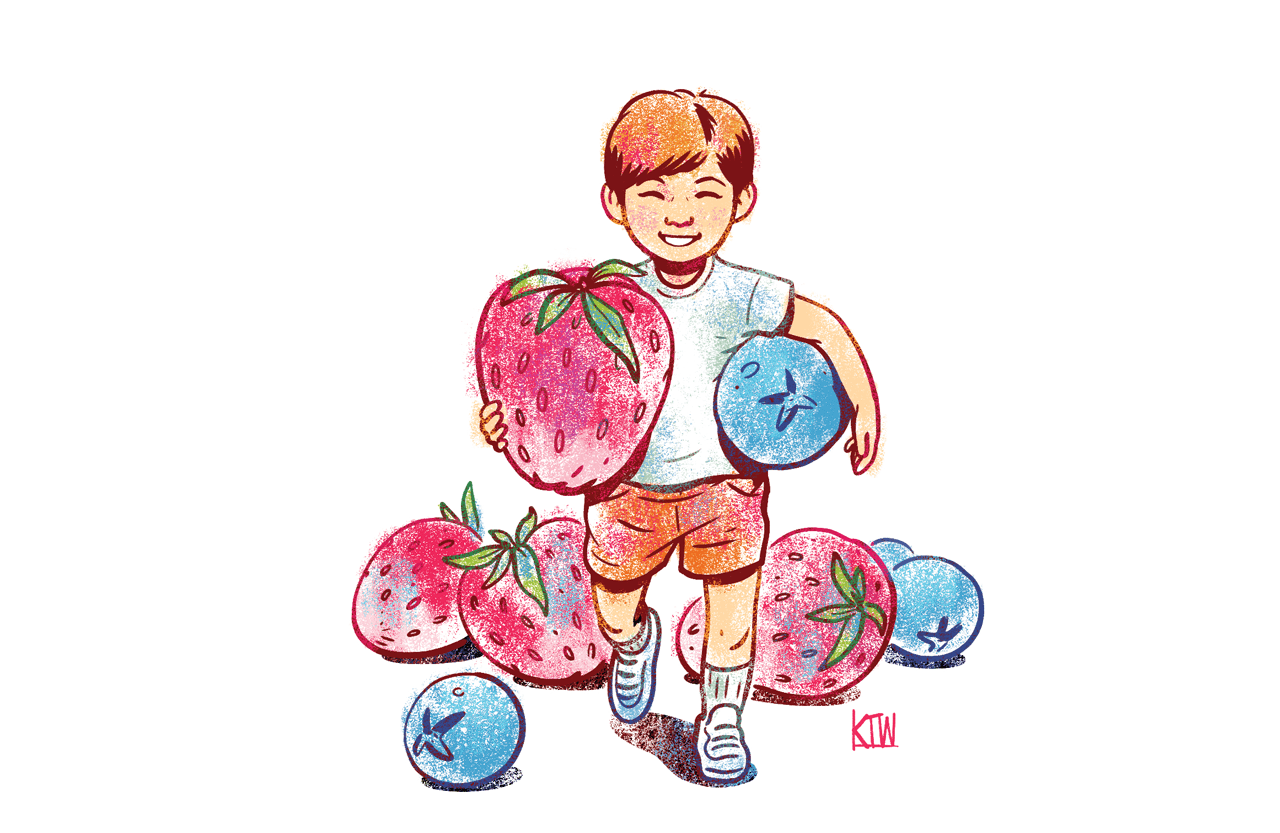 You have to love life in a state that has two official berries. Around here, we love our strawberries and blueberries so much, we couldn’t choose between them. Like a football star who can’t decide which girl is the prettiest, our Legislature settled by not settling.

All in favor, plop down in the mud with a bucket and get to picking.

Although I’ve visited a blueberry farm or two in my food-reporting duties for The Charlotte Observer, I haven’t had much experience picking blueberries. They tend to thrive in more remote areas, and they can take up a lot of acreage.

Strawberries, though, are my fruit. In the last 20 years or so, I’ve scooted along black-plastic rows in at least four counties. When my son, Chris, was growing up, I made it my goal to introduce him to his food up close and personal. We bumped around pumpkin patches, trudged through apple orchards, and rubbed elbows with goats.

It started when he was so young that I had to nudge his infant carrier along with my plastic bucket while I picked gallons of strawberries. Every April or May until Chris was well into high school, we’d make a point of finding a local berry farm and getting down to work.

It wasn’t all that long before he graduated to getting his own bucket, squatting down in his own muddy row and filling his belly with almost as many berries as we took home.

Chris became a serious and intent picker, or as serious as a boy can be with his mouth smeared with red strawberry juice. As he got older and we started rounding up friends to take along and introduce to the joys of truly fresh strawberries, Chris took charge of giving instructions, sharing the rules I taught him of the berry picker’s art: “No white tips, no green shoulders.”

Because strawberries don’t ripen after you pick them, you have to make sure they’re completely red before you pull them off the plant. If they aren’t completely red, you should leave them for someone else to pick the next day.

In the years when I was a working mom with a school-age kid, it could get tricky to find picking time. You want to pick when it’s cool, either in the morning or at dusk. The middle of the day isn’t just sweaty — the berries keep better if they’re cool when you pick them.

How many workdays did I rush home in 5 o’clock traffic, just to put on my muddy yard shoes, toss my son in the car with a portable dinner, and head right back out on the road, bound for one farm or another? We stopped on the way back from Cub Scout camping trips when we were already so dirty, another layer of grime wouldn’t matter. Whenever we were out in the countryside, we tried to make it count.

The taste of something sweet and fresh can get addicting. One spring, we talked a friend into going along. A true urbanite who had grown up in New York City, she dragged her feet and acted like the whole thing was just so quaint. Eyes might have been rolled. But she went home with a full cardboard basket and later confessed that she ate her strawberries so fast, sliced up in cream, that she ended up taking a date out picking the next weekend, just to get more. A new strawberry fan was born.

Time passes and kids get out of your reach as they grow. But Chris stayed a regular food forager through high school, always willing to stop at a mountain orchard or go on a food adventure to an Asian market or Ethiopian restaurant. He’s still serious and intent and just a little goofy, an easy companion to take along anywhere.

I can’t call myself an expert on raising kids to have good food habits. I only raised one. But I can tell you this: I tried to make his food world as wide as possible, and it worked. I showed him what fresh food tastes like, then left him to make his own choices. By the time he was 10, he had started a personal campaign to never eat at a McDonald’s, a vow he has stuck with for 11 years and counting. When I ask why, he just says he doesn’t like the way it tastes.

I can’t help thinking that his childhood experiences had something to do with that, those perfect moments of sitting in a field and popping something in his mouth that was seconds off the plant and still warm from the sun that sweetened it. I hope he always remembers the work, too, and always remembers that nothing reaches our mouths unless someone worked to grow it and harvest it.

So I really should say thank you to our Legislature, for realizing that it takes a whole state full of fresh food to raise a food-loving kid. Thanks to our blueberries and strawberries, I got to raise mine in a state that truly is red and blue.