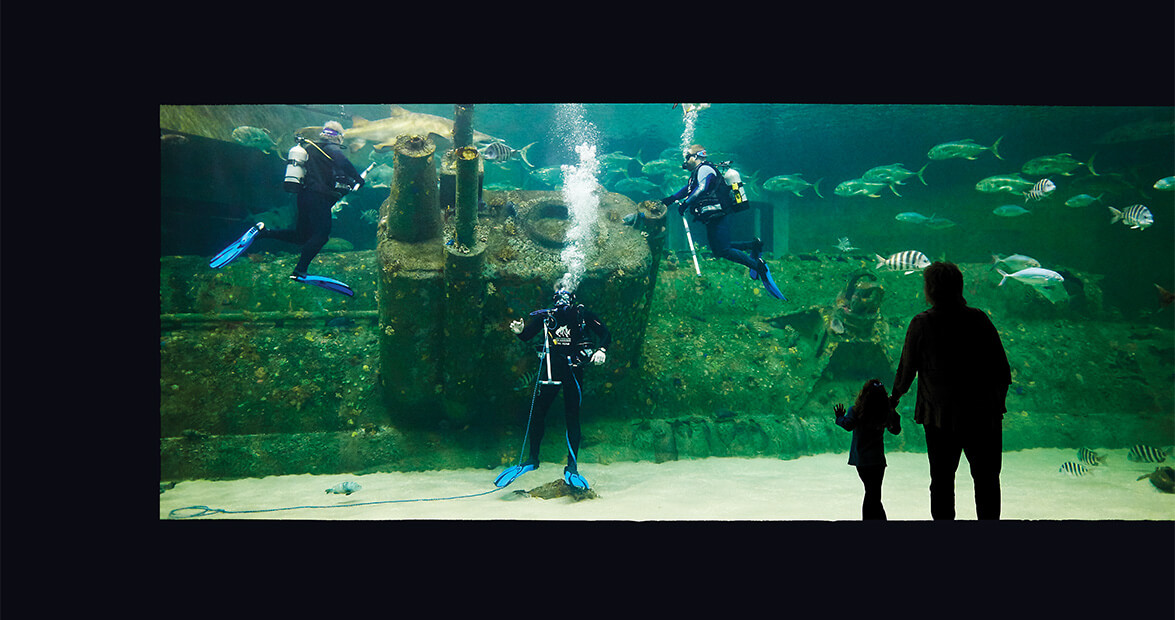 Shipwreck divers are early risers. Dive charters head out around 6 a.m. so that customers have time to prep their equipment, run through their dive plan, tick off items on their safety checklist, double-check their safety checklist, and then actually get into the water and down to the wreck. One of the most sought-after wreck dives on the coast, though, isn’t even in the ocean. At the North Carolina Aquarium at Pine Knoll Shores, 60 volunteer divers from across the state — and another dozen members of the aquarium staff — vie to be a part of one of the two scheduled daily dives on a replica of one of the most famous wrecks in the Atlantic.

As Ethan Simmons goes over this afternoon’s dive plan, the three volunteer divers bobbing in the water check their gauges and breathing regulators. When Simmons, the aquarium’s dive safety officer, asks the divers if they are clear on that day’s tasks and if each knows what role he’ll play on the dive, each diver loudly says “yes.” A mere head nod won’t do.

Sure, diving on the aquarium’s three-quarter-size replica of the 220-foot-long German World War II submarine U-352 isn’t quite as daunting as a dive on the real thing — for one, the former is just 70 feet long and sits on the bottom of a 306,000-gallon aquarium tank in 15 feet of clear, well-lit, 77-degree salt water; the latter is on the bottom of the ocean in 115 feet of murky seawater that’s frigid in winter and like bathwater in summer. Still, safety and dive preparation are just as much a priority here as there.

Of course, divers can’t prepare for every circumstance. Today, unexpected forces cause the lead diver to deviate slightly from the plan Simmons laid out. Improvising, his fellow divers keep sharks at bay. The culprit? An itsy-bitsy spider. Or, more specifically, the itsy-bitsy spider: On the spectator’s side of the tank’s eight-and-a-quarter-inch-thick acrylic window, a 4-year-old boy with his finger pressed against the window has engaged the diver in an impromptu duet of the kids’ song.

U-352 joined the list of an estimated 2,000 shipwrecks in North Carolina’s notorious Graveyard of the Atlantic more than 70 years ago, a period in the state’s nautical history that saw hundreds of vessels sent to the bottom of the ocean in the span of a matter of months. The sinkings began just weeks after the United States was pulled into World War II with the Japanese bombing of Pearl Harbor in the Pacific, when Nazi Germany brought the war to the North Carolina coast. Beginning with the January 19, 1942, torpedoing of the 337-foot-long U.S. freighter City of Atlanta off the coast of Avon, German U-boats wreaked havoc on the shipping channel along the Outer Banks.

When the Nazi onslaught known as Operation Paukenschlag, or Operation Drumbeat, began, a single U.S. Coast Guard cutter, USCGC Dione, was responsible for protecting the entire East Coast — which might explain why German sub commanders referred to this period of the war as “American shooting season.” By July, almost 400 merchant ships had been sunk, earning the corridor the moniker Torpedo Alley.

By comparison, during that same period, only nine U-boats were sunk by U.S. forces — including four off the North Carolina coast.

In the midst of the Nazis’ 1942 incursion into American waters, the commander of the U-352 made the ill-fated decision on May 9, 1942, to attack the USCGC Icarus, which was on patrol for subs and ready to fight back. But when the sub’s torpedo exploded short of its target, the Icarus responded with a depth-charge attack that forced the sub to the surface, where the crew then abandoned ship before the U-352 sank 28 nautical miles south of Morehead City. Thirty-three German sailors made it off the ship; 15 drowned on board.

The sub lay undisturbed until 1975, when the owner of the Olympus Dive Centert in Morehead City found the wreck. Today, the U-352 is one of the state’s top dive sites.

The aquarium’s re-created U-352 joined replicas of Blackbeard’s Queen Anne’s Revenge and the World War II-era freighter Caribsea in May 2006. The sub sits across the length of the 70-foot “Living Shipwreck” exhibit, listing toward spectators at a 45-degree angle. Its barnacle-encrusted conning tower — the raised area from where the Nazi skipper gave the orders to fire on unsuspecting Allied ships — creates a natural path for the swirl of fish, eels, and rays. For most people, the faux wreckage is as close as they’ll get to seeing the actual ship.

The scale version looks so much like the German warship that the aquarium display was used as a stand-in during a 2007 ceremony for survivors attended by Heinz Richter, one of the 33 Germans who made it off the sub. During the memorial, Simmons and Stuart May, the aquarium’s director of husbandry and operations, placed a wreath on the replica as a memorial for the sailors entombed on the actual U-352.

“A lot of people don’t think about it being a war grave,” Simmons says. Out of respect for those who perished, the aquarium doesn’t put decorations in the exhibit that might be inappropriate, like plastic skeletons at Halloween.

During the two daily interactive dives, though, when divers field questions from within the tank, few aquarium-goers ask about the sub’s war service, let alone the fate of its crew. People ask the divers how they got started. (May says he was inspired as a kid by the television show Sea Hunt; Simmons grew up near the North Carolina Aquarium at Fort Fisher and made his first dive in high school.) But the things most spectators, especially kids, want to know about have razor-sharp teeth and bad reputations: the sand tiger, sandbar, and nurse sharks that circle the divers in the tank.

Do they ever eat the other fish? How do you keep from getting bitten? Are you afraid of the sharks? According to May: Yes, sharks eat other fish, but not often. Divers use sticks made from PVC pipes to encourage sharks to keep moving along. And no, he’s not afraid of the sharks in the tank.

“People watch too much TV,” May says.

Divers like May and Simmons — and the hundreds of others who venture under the waves — have man and Mother Nature to thank for the thousands of shipwrecks that litter the seafloor along North Carolina’s coast. Cannonballs have sunk wooden boats, torpedoes have brought down steel ships, and hurricanes have claimed everything from rickety sloops to mighty ironclads. Still more ships — as well as railroad boxcars and airplanes — have been sunk intentionally as part of the North Carolina Division of Marine Fisheries’ artificial reef program. Once on the seafloor, time and tide beat, bury, and often recycle the helpless hulls.

For some ship captains, a quick trip down the coast on the swift current was worth the risk of crossing paths with a U-boat or hitting one of the Outer Banks’ treacherous sandbars, such as those at Diamond Shoals, Cape Lookout Shoals, and Frying Pan Shoals. And the costs and benefits remain — except for those pesky U-boats, of course.

The museum is filled with the stories behind the people and vessels involved in the shipwrecks. Many of the tales involve the three ships featured in the aquarium’s exhibits, like the wreck of the Caribsea, whose spar, Wunderly explains, was found on an Ocracoke beach and fashioned into a cross for the village’s Methodist church. And just as the aquarium provides a glimpse at what a few of the wrecks look like, the museum closes the gap in the narrative for these, and other, wrecks. To complete the experience, maritime history buffs could don masks and tanks and flippers, and see the wrecks on the sea floor for themselves, but Wunderly admits: “Man swimming around underwater just isn’t a natural thing to do” — especially in the Graveyard of the Atlantic.

This story appeared in print as “Diver Down” in the May 2015 issue.