Sitting inside Dunn’s Deli, with its huge windows overlooking the downtown core of the one-stoplight Banner Elk megalopolis, it occurs to me that you just about couldn’t bend over and tie your shoes in Banner Elk without showing off a view of your back end to the folks inside the diner. This isn’t a small town. This is a tiny town.

At the walk-up counter, I order biscuits smothered in white gravy and chopped sausage, and the cook chats me up.

“You from around here?” he asks.

“Afraid not,” I reply. “From the dreaded Raleigh.” It’s a line I’ve used to disarm many of my fellow North Carolinians when I’m traveling.

He grins behind a ZZ Top beard. “That’s no problem,” he says. “We’ll feed you just the same.”

When the biscuits come, I ask the cook — his name is Tom — about the proprietor of Dunn’s Deli, a fellow named Mike. I’m a few minutes early, but I’m supposed to meet him in my search for the answer to a question that has vexed me for years: Just what the heck is Banner Elk, anyway?

“No, sir. He’s up at the house,” Tom replies. And I like how he says it: Like I ought to know where Mike’s house is. Like I’ve been hanging around with Mike since the third grade. Like I’m a local he hasn’t yet met, but he’ll get around to that as soon as he finishes frying this bacon. (Later, I learn that “the house” is Mike’s other business, The Perry House Bed and Breakfast.)

I sit down and eat my biscuit. I like this place.

I’ve lived in North Carolina all my life, and I’ve pondered that question: Just what the heck is Banner Elk? I think it’s a town, but maybe it’s just an unincorporated crossroads. Is it a resort? A ski slope? A training facility for athletic woolly worm caterpillars? And there’s a college there, right? And where is Banner Elk, anyway?

To get at the answers, I called my friend Shannon Maness. She’s the general manager of the Best Western in Banner Elk, and her husband, my pal Matt — a fly-fishing guide and boatbuilder — jokes that she is the “unofficial mayor of Banner Elk. She knows everybody in town, and for some reason, everybody in town loves to tell her their business.” Which got me to thinking: Maybe the town crier could put to rest for me, once and for all, the mystery of Banner Elk.

From Dunn’s Deli, Shannon and I strike off for the nearby Tate-Evans Park, where Banner Elk’s real mayor, Brenda Lyerly, is well known for her habit of walking her two Scottish terriers each morning. “Oh yes,” she says, laughing, when we find her on a sidewalk near Shawneehaw Creek, “people come out here to ambush me all the time!” Lyerly is vivacious and chatty, and her day is already humming along at 100 miles per hour. The night before, a water heater burst in her historic home, and she was in a pickle as water flooded her kitchen. Shannon already knew about this, of course. Half the town already knew about it, it seems, and more than a few of them were in Lyerly’s house last night, pitching in to help.

That’s the beauty of Banner Elk, Lyerly insists, beyond the beauty of the mountains. “I tell everybody: It’s the people that make this place special.” 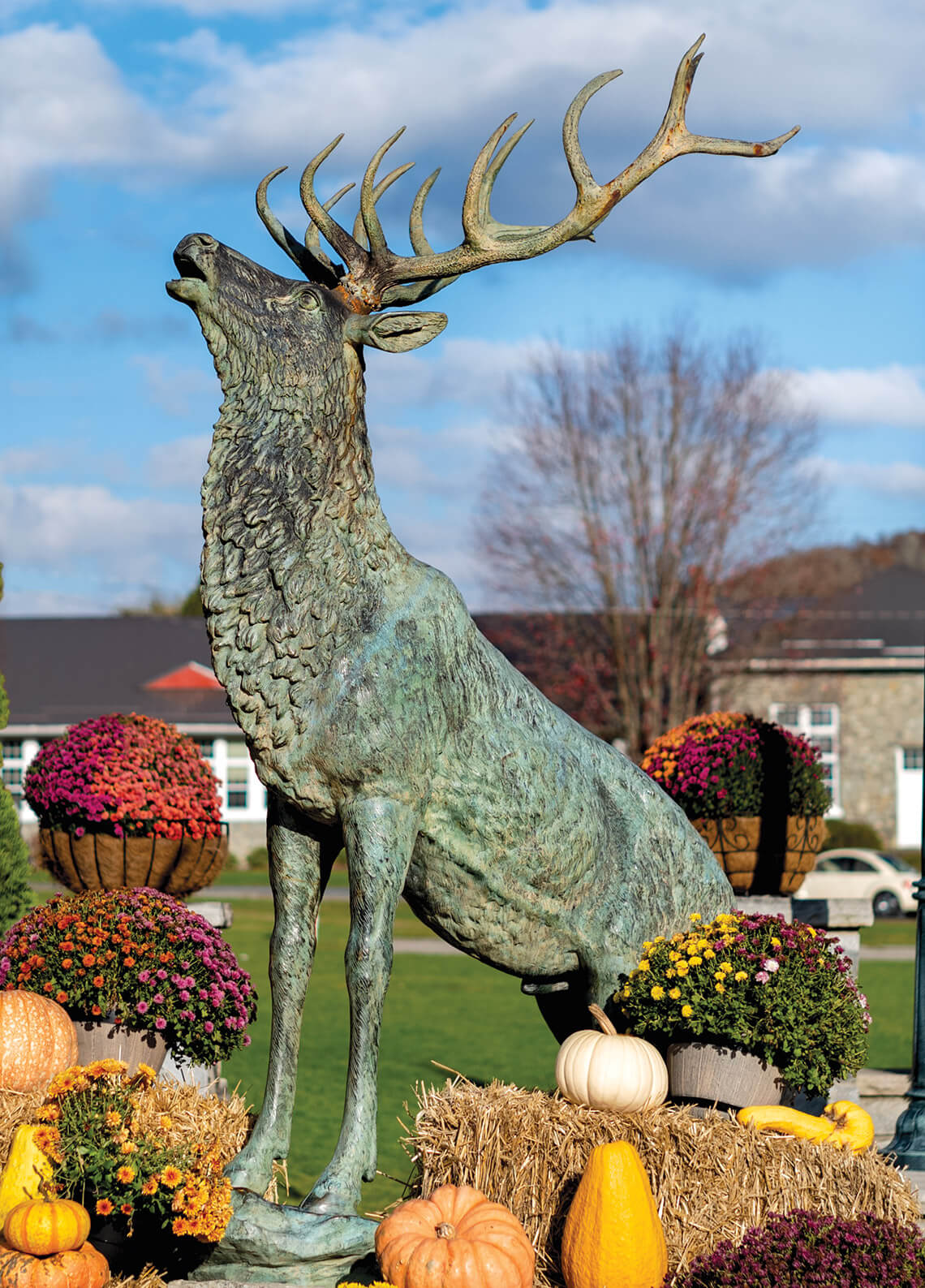 A bronze elk welcomes visitors to this Avery County town — especially during the third weekend in October, when the Woolly Worm Festival is held on the lawn behind the statue. photograph by Charles Harris

And it seems like most of those people are expecting mail today. Next, Shannon and I head to the Banner Elk post office, a block off the main drag. We’re not in the door before Jim and Ann Swinkola call over to chat with Shannon. A fellow named David McManus hollers out a greeting. They talk about how their tomato plants are doing and who’s been on a mission trip. They talk about the Pittsburgh Steelers and the water pouring out of poor Brenda Lyerly’s kitchen last night.

In a few seconds, Dana Rominger pulls up in a candy-apple-red convertible, with a couple of trash bags tucked behind the seats. He grew up in Banner Elk long before it had its single stoplight, when most people “had to go off the mountain to find work.” For the past three years, Rominger has picked up trash along NC Highway 194, from the stoplight to the Watauga County line. “I get everything I can see,” he says, “all the way down to cigarette butts.” I ask if he does it as part of the state’s Adopt-A-Highway program.

In 20 minutes, we barely move our feet, but I meet nine local Banner Elkians. Or Banner Elksters. I’m not sure which, but they are a friendly bunch.

Situated between Beech Mountain and Sugar Mountain ski resorts, between Grandfather Mountain to the south and Tennessee to the north and west, Banner Elk is packed with restaurants, and it bustles from morning till night. You can see it all from Dunn’s, and I recalled the view out the deli’s windows. SUVs and cars and pickup trucks streamed by, and most were laden with something: mountain bikes or fly-rod cases or kayaks. Everybody on the move, trying to stake their little weekend claim to paradise. Everybody on their way to somewhere. Except the lucky Banner Elkians. Or Banner Elkites. Or Banner Elksters. It seemed to me they had already arrived. No matter the season or day of the week or time of day, they were already home.