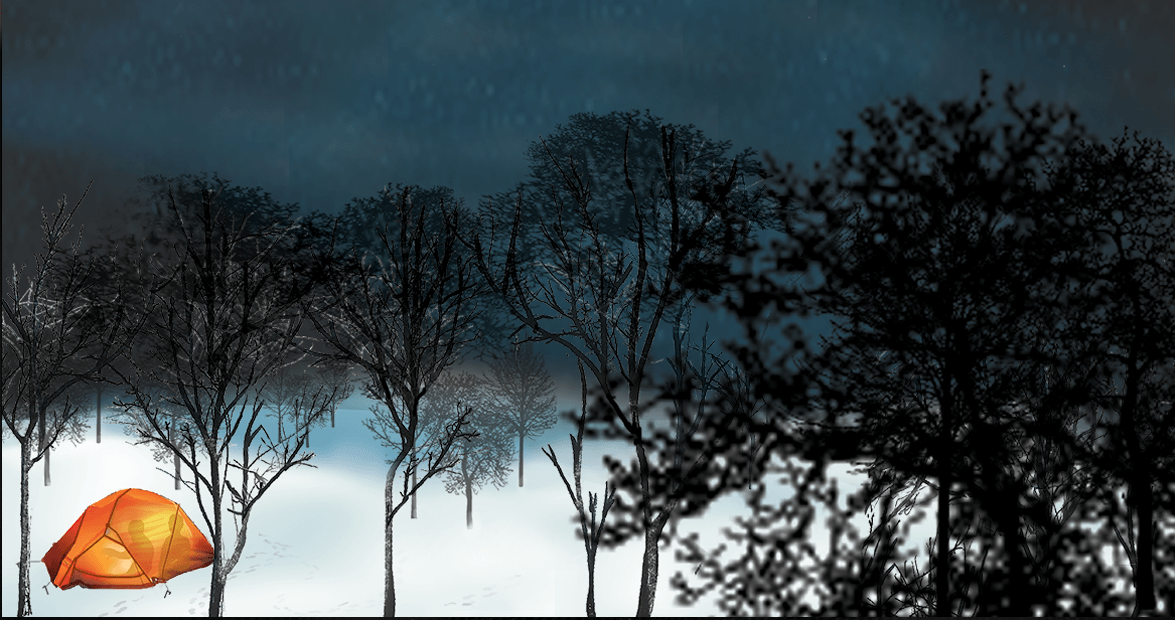 Editor’s note: This story originally appeared in the February 2013 issue of Our State titled “A Case for Camping Under the Snow.”

We knew it was cold when we tried to make breakfast. I hadn’t thought too much about it as I brushed against the inside of the tent and frozen condensation fell on us like snow, or when I needed a rock to pound my boots free of frozen mud before I could slide my feet in. That was all pretty typical for a winter backpacking trip. But when I tried to crack the eggs for breakfast, I found them hard as granite. Frozen solid. So solid that my pals and I took turns hurling the eggs as hard as we could at a nearby boulder, howling with delight as the eggs shattered into shards of amber and white ice.

Like kids at Christmas, we tore through the food bags to see what other oddities a minus-4 degree night had delivered. What a jackpot: country ham slices solid as circular saw blades, bagels that could dull an ax, a head of broccoli I could have clubbed a bear to death with like it was a green, medieval mace. Now that’s cold.

That was 30 years ago, up on the mile-high trails that cross the Mount Mitchell backcountry, but you can bet the memory is still as sharp as a two-foot icicle. That’s one thing about backpacking in the winter. So many moments are unforgettable. Frozen, you might say, in time.

Winter backpacking in North Carolina might seem like an exercise in masochism, but in many parts of the country, backcountry winter sports are as common as a summer game of roll-a-bat around here. I have friends in Colorado who think nothing of ice-climbing frozen waterfalls. Pals in Michigan for whom ice fishing is just what you do when the mercury goes into hiding.

But North Carolina? Here, the notion of sleeping outdoors in winter is met with a whiff of bless-your-heart. I mean, why not head to the hills a month or two earlier, when autumn color is at its peak and the air has but a brisk hint of winter? Or shouldn’t you wait a month or two, at most, until the redbuds and dogwoods fight for the title of prettiest spring harbinger, and the nights are still cool enough for a campfire?

Common-sense approaches, every one. And there’ve been times when I shivered by the fire, thawing my frozen socks on a stick like a roasting marshmallow, when perhaps I would have agreed. But then I think of what I’d miss by pulling a Punxsutawney Phil just because of a minor blizzard or three. Southern Appalachian balds coated with frozen cloud droplets — every twig, every rock, every needle on every balsam bough encased in a jacket of rime. Streams locked in ice, like a time-lapse photograph. Woods utterly empty of humans. (For good reason, perhaps.) And eggs hard as granite.

To tell you the truth, my winter backpacking trips did have roots in machismo. At the University of North Carolina at Chapel Hill, my crowd bypassed the spring break trips to Cabo and Cancún for weeklong campouts at Mitchell and Merchants Millpond. We had good tents, good boots, and the good fortune to have fallen in with like-minded companions. It didn’t hurt that we were young and relatively fit and pugnacious enough so that hardheadedness carried us through those places where good sense would have prevented our going.

About the time some folks were packing beach towels, we were hoping: Let it snow, let it sleet, let it hail, let the bottom fall out of the biggest winter storm since the dinosaurs died. We wanted nighttime lows with a minus sign. We double-dog-dared Old Man Winter to a showdown of fleece and endurance.

One of our first spring break trips set the tone. We drove to Mount Mitchell, the highest peak east of the Mississippi, under clear, blue skies, but we knew what was coming. We’d been watching the weather, with the national map a mass of angry lines and ugly, jagged marks that resembled the Civil War battlefield maps in history books. A deep arctic low curved across the television screen like a giant, frosted scimitar. Right on cue, the front slammed into the Appalachians. When we woke up on our first morning, the world outside the trail shelter was blanked in more than a foot of powder. We couldn’t hike farther; we couldn’t retreat. We were hopelessly, helplessly, blissfully snowed in.

So we ate a whopper breakfast. Then we broke into an intense snowball fight. We warmed ourselves by the fire. We made snowmen and snow angels. We took a halfhearted stab at an igloo. We ate again, napped again, more fire, more snowballs.

By then it was lunchtime.

These days, my winter trips aren’t quite so purposefully extreme. Thirty years later, I’m as likely to run from the rough stuff as once I pursued it, but I still grab a pack or canoe when the going gets frigid. One recent winter, I headed out with my son, Jack, who was 10 at the time, and his buddy, Robbie Simmons, and Robbie’s dad, Chris. We had grand plans of an assault on Mount Mitchell, or Roan Mountain up on the Tennessee line, but heavy snows just about everywhere had us thinking twice. At Roan Mountain, the Appalachian Trail had been closed. To get to the trailhead at Mitchell would have required a helicopter.

But South Mountains State Park was still open to all comers, and every inch of the park’s 40 miles of trail was new to us. On a loop trip along Shinny Creek to the Horseridge Trail, we climbed through huge oak forests with 100-yard views through the spare winter woods. Leaves on the rhododendrons atop the ridgelines were curled up with the cold, but we shucked our fleece and soaked in the sun, warmed by exertion. In the cove forests along the creeks there was just enough snow and ice to keep the kids’ attentions sharp. In places, the trails were wide enough for Jack and me to hike side by side, keeping up an easy banter.

What a pleasant surprise. I’d always skipped South Mountains because it wasn’t quite big enough, not quite dramatic enough. But picking my way down the Sawtooth Trail and climbing up to the gorgeous Chestnut Knob overlook, I learned that I didn’t know it all. My native state still had surprises up her sleeve.

It goes to show that not every winter trip needs to be a boreal kick in the pants. The rewards of backpacking in winter are as likely to be subtle and nuanced as they are draped with drama.

For every roaring storm there is the distant groan of a tree, its frozen trunk creaking in a night breeze. For every blizzard, a beech tree alone in a grove of oaks clinging to the last of its dry, brown leaves like a child grasping a parent’s hand. You have to look for these winter payoffs. They won’t grab you by the eyeballs like autumn color or a waterfall’s rush. There are tracks of turkeys in day-old powder, a glimpse of deer with snow-coated whiskers, night hikes in snowy woods brightly lit with moon glow. The rewards of a winter backpacking trip are likely to be set pieces of imagery, preserved in memory like a woolly mammoth trapped in a glacier.

And truthfully, much of the pleasure is the realization that whatever climactic trials you face are temporary. There is calm after the storm.

I remember another February walkabout to Joyce Kilmer Memorial Forest among its virgin timber. For two days, the heavens spewed rain and sleet. Frozen precipitation accumulated on our parkas like a rhino’s protective plates. At times visibility was next to nothing as clouds swarmed over our mountain. There was little to do but keep marching on.

We finally topped out on Stratton Bald just as the soupy clouds began to thin. The rain stopped and ragged patches of blue opened in the sky as the front pushed the clouds eastward. Within minutes the sun was at full strength, setting the sleet-slicked valley below afire in a sparkling, white blaze.

We shucked our soaked parkas and hung our shirts to dry. For nearly eight hours, we’d kept up a pace as steady as the winter storm, hoping that the end of it all waited just beyond the next switchback, just over the next mountain.

We didn’t see a single cloud for the rest of the trip.

Such agony I’d wish on everyone.