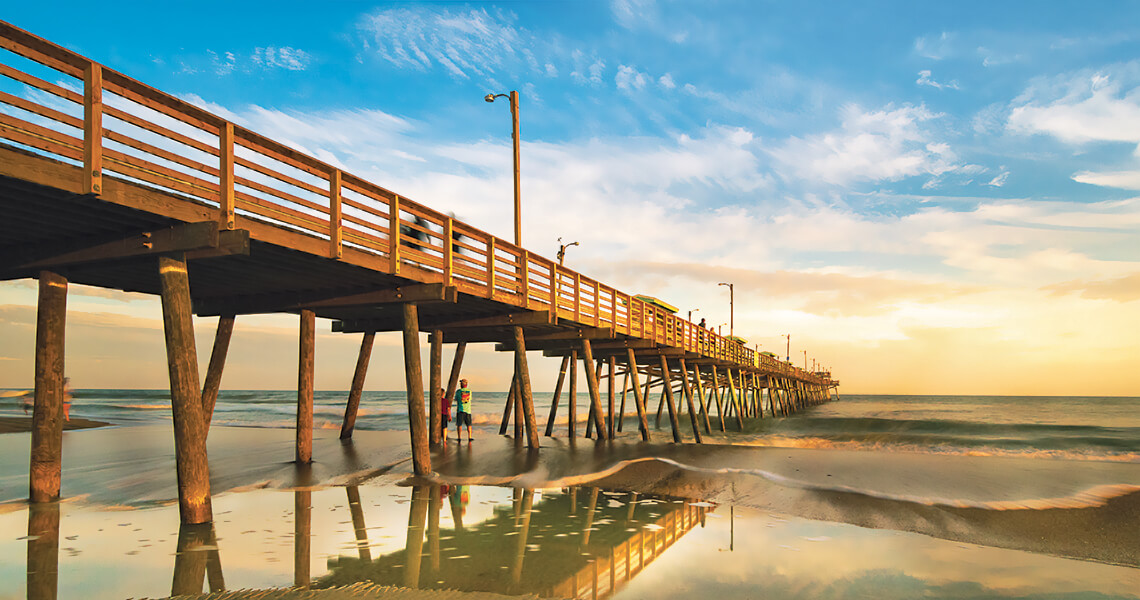 For a downloadable checklist of this guide that you can print, save, or screenshot to take with you, click here.

North Carolina’s 18 piers are stalwart landmarks for families and fishermen who’ve gone to their beach for generations. Cast a line, take a stroll, breathe in the salty air — and order that ice cream cone. This is your official NC pier bucket list.

Built in 1959
Inspired by the sunset-watching parties on Mallory Square in Key West, Florida, the Barnacle Bar at the end of the nearly 1,000-foot-long pier lures more than just fishermen. Order a frozen Painkiller and settle in for live music.

The weather-scarred wooden pier in Avon juts out 665 feet from Hatteras Island and is known for its excellent red drum fishing.

Fish for Spanish or king mackerel, or grab an ice cream cone from the on-site convenience store and post up on top of the observation deck to watch the action.

Browse the beach shop and watch as the setting sun fills the sky with color.

The pier house often hosts weddings, but for simpler pleasures, it’s an excellent spot to watch the sunrise.

The oldest pier on the Atlantic Coast is open 24 hours a day in the summer, so people come to fish, stroll, and hang out around the clock.

It’s no longer the only pier on the Outer Banks, but it stands alone as an eco-friendly educational center where children and adults alike can explore aquarium exhibits, learn about renewable energy, and, of course, learn how to fish.

Catch a fish and the Pier House Restaurant will cook it — fried, grilled, or blackened — and then serve it to you on a plate piled with French fries, slaw, and hush puppies. The stunning ocean view is a bonus.

At more than 1,000 feet, this pier is one of the longest in North Carolina. At one end, it offers king mackerel fishing; at the other, a memorable cheeseburger.

At 27 feet above the sea, this is the tallest pier in the state. Take a stroll to the end and wonder at the views of Oak Island.

Bring your own beach chair to get comfy while you drop a line or relax beneath the shady gazebo at the end of this pier, which often hosts fishing tournaments.

Be sure to order a cheeseburger at The Pier Grill, then grab an ice cream or a beer from the small shop to enjoy in “the backyard.” The grassy area is filled with wooden tables overlooking the ocean and often features live music.

Go fishing, look for sea life, hang out in the game room with a cold drink, or simply take in the view of the coast dotted with colorful houses.

In 1864, Vesta, a Confederate blockade runner, ran out of fuel and then ran aground on what was then known as Bald Beach. It was unloaded and abandoned, set on fire, and, eventually, buried by sand. This pier was built over the sunken ship hull.

The original Surf City Ocean Pier was mostly steel. Now, the wooden structure offers ocean views above and a different kind of beauty below — almost like a cathedral.

This pier opens up early so that fishermen can get a weather update and a bag of breakfast sandwiches to go — but even if you aren’t heading out on the boat, you can still enjoy a tasty breakfast.

Spectators on Wrightsville Beach’s only wooden pier have the best seats in town to watch surfers catching waves. But those in the know stay for a meal at the adjoining Oceanic restaurant. Diners fill the window-facing seats, and more sit outside on the pier itself, where tables overlook the sand and sunbathers below.

This solid-concrete pier — unusual on the Carolina coast — is a favorite fishing spot year-round. When you want to get out of the sun, duck into the pier house, which features a tackle shop, grill, gift shop, and small arcade.