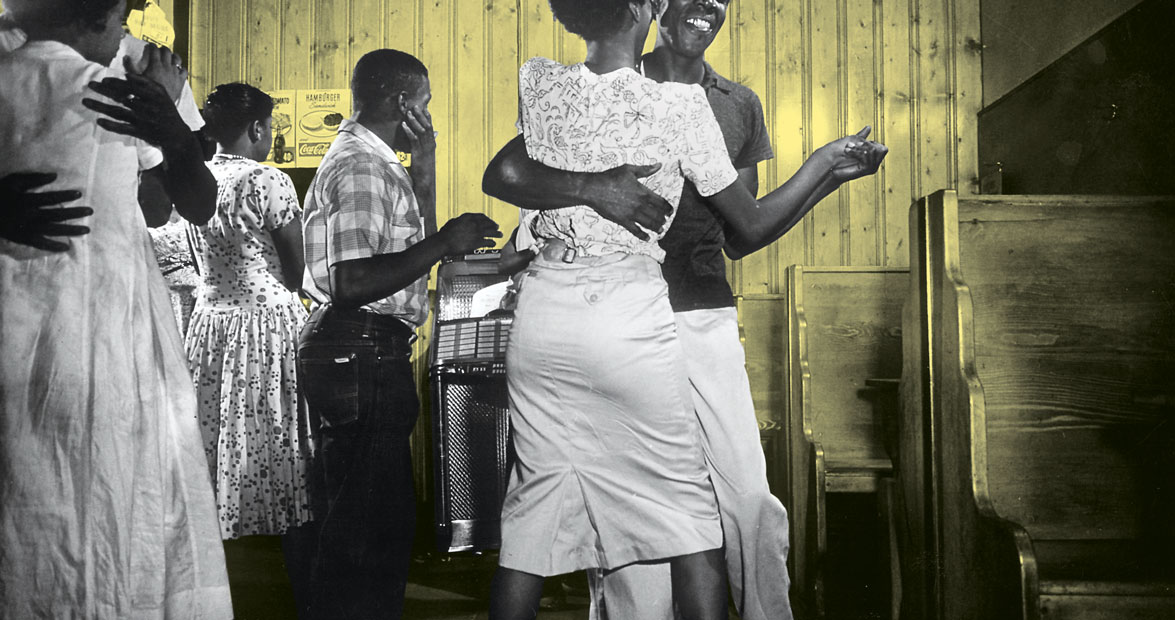 The seeds of a new, high-energy dance music were planted in the 1940s on a tract of land just north of Carolina Beach, stretching from the river across the peninsula to Myrtle Grove Sound in a lively resort community called Seabreeze. Now, as the decade turns, it becomes the destination of choice for black families from near and far. Segregation still prohibits blacks from entering white hotels and clubs, such as those in Wrightsville Beach to the north. Seabreeze becomes not just a wildly popular haven for black families seeking leisure, but also a place that helps transform the musical soundscape of the South — and the nation.

A hundred years earlier, Alexander and Charity Freeman, “free colored persons,” had acquired about 180 coastal acres. Their son, Robert Bruce Freeman, illiterate but shrewd in business, acquired more land — including Gander Hall Plantation and Sedgeley Abbey Plantation, with its majestic mansion, for a total of 2,500 acres — at the going rate of 15 cents per acre. Eventually, he held more than 5,000 acres. He donated land for a school and a church campground, attracting as many as 3,000 people to a camp meeting.

Later generations of Freemans farm the land and fish the waters offshore, harvest timber and distill whiskey, and sell granite and clay. And they intentionally work to turn the waterfront acreage into viable commercial enterprises. Gradually, the ocean beach and inshore land become a place where blacks can swim, dine, and dance without interference from their white neighbors.

In 1913, some of the Freeman heirs sold a tract of land just south, on the north boundary of Carolina Beach, and when those seaside lots were sold, blacks were prohibited from buying them — thus eventually hemming in the Freeman beach property without its own road access. Visitors then had to swim the narrow sound or wade across to the ocean beach at low tide — or be ferried in small boats.

Meanwhile, cottages sprang up — not just rude structures, but attractive, upscale bungalows that are described by a Harlem-based columnist as “swank,” occupied by “a sporting crowd dressed in linen suits and driving roadsters.” In 1924, Tom and Victoria Lofton of Wilmington completed construction of the Russell Hotel at Seabreeze, a three-story resort offering 25 airy rooms, a restaurant, and, perhaps most important, a dance hall, inaugurated with a performance by Frank Herring’s seven-piece orchestra.

Farther up the coast, in 1924, Thomas  Wright and Charles Parmele established a competing black resort on Shell Island, just north of Wrightsville Beach, with a pavilion, a bathhouse, a restaurant, a pier, and 274 platted lots for building along 14 streets. A ferry made four round-trips daily to and from the barrier island. Thousands gathered for its grand opening, and visitors came from as far away as New York and Alabama. The promoters described the project as not just a resort, but also “a movement founded in the forethought of liberal businessmen of the South who realize that the Negro’s outlet for social and recreational development has heretofore been severely limited.”

But Shell Island survived just three summers before its main buildings were destroyed by a spate of suspicious fires “of undetermined origin.” Investors abandoned the ruined resort in 1926. Wrightsville Beach officials began passing ordinances restricting black bathers to the northernmost tip of the beach and prohibiting them from promenading on the boardwalk, where they could be seen from white-owned cottages. Seabreeze became an even more prominent leisure haven for the black community, and in the 1920s, Ellis Freeman sold lots that offered full access to the beach and encouraged black entrepreneurs to set up restaurants and hotels. By the 1930s, Seabreeze was going strong.

A decade later, it counted three hotels and 10 restaurants — such as Sadie Wade’s, which specialized in deep-fried clam fritters that sold for a nickel apiece. Seabreeze also had a bingo parlor, a pier, acres of clapboard cottages in neat rows, bathhouses, and a dance pavilion. In the summer, it hosted a carnival complete with a carousel, a Ferris wheel, and other rides — and a sideshow run by Snake Man and featuring the Woman with No Body. During the war years, the Federal Works Agency built a bathhouse for the many black servicemen stationed in the area, including the first black Marines at Montford Point. Buses ran from Camp Davis and Montford Point to a “Jim Crow loading zone” in Wilmington, where other buses took the servicemen to Seabreeze. Gambling and moonshine were readily available.

Because the Carolina Beach police wouldn’t let blacks drive through that community to get to Seabreeze — which was separated from the soundside resort by the Intracoastal Waterway — boats continued to ferry families across to the beaches.

Besides the hotels, Seabreeze had more than 30 “juke joints” that offered dancing to the hottest numbers on a jukebox or piccolo. Some booked live bands that played bebop, boogie, and swing music long into the night for the crowds of fashionably dressed dancers.

While black and white audiences were separated by law, their music was not. Two white brothers, Malcolm “Chicken” and Bobby Hicks, grew up going to dances in or near the Hayti district of Durham. At Skinny’s, a shoeshine shop with a jukebox, they learned to dance to all the hot “race” records — bebop, boogie, and rhythm and blues — music with a beat that drove energetic dancing. By the early 1940s, the brothers were in Carolina Beach. They got to know the vendors who stocked the jukebox records.

Chicken recalls, “They’d be down servicing the jukebox, and one of them would say, ‘Let’s get the jug and go down to Seabreeze.’ I’d say OK, and we’d go down there and I’d hear this music … the music at Seabreeze was different [from Carolina Beach] because it was black swing and rhythm and blues, where [Carolina Beach] music was white.”

Chicken persuaded one jukebox owner to stock some black records, and all of a sudden, the music of Seabreeze was playing all over town. Teenage white “black dancers” filled up the joints.

One of the first to stock black records was the Tijuana Inn on the ground floor of the Ocean Plaza building on the boardwalk. The records were such a draw that within two years, it expanded across the street to a bowling alley that the owner renamed Bop City. More “jump joints” large enough for dancing crowds opened along the strand, and beach music took hold — made up of rhythm and blues favorites like Amos Milburn’s “Chicken Shack Boogie,” Paul Williams’s “The Hucklebuck,” and Count Basie’s “One O’Clock Boogie.” 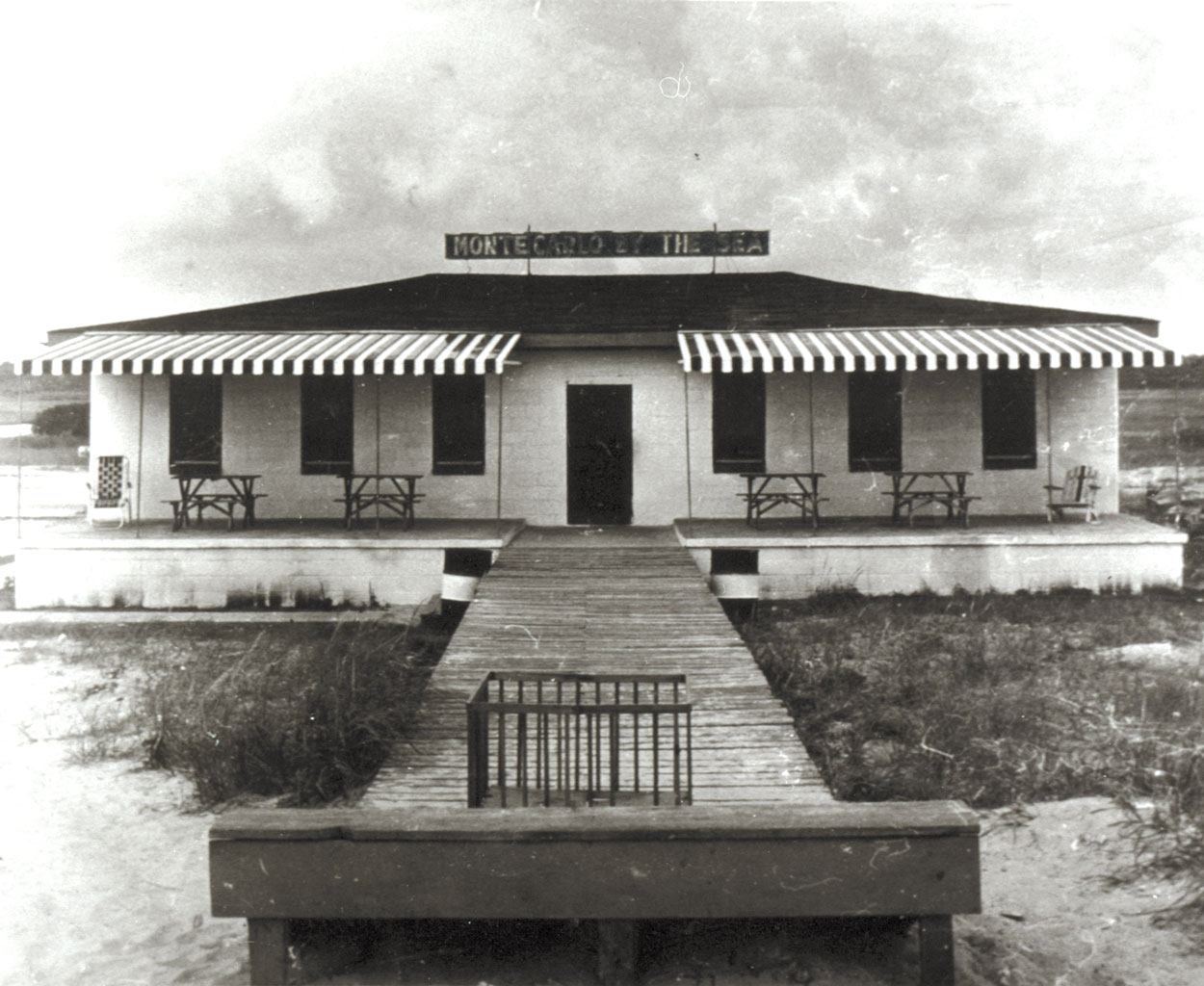 With dozens of juke joints throughout Monte Carlo by the Sea (above), there was a good chance that one of the popular 45s of the day was playing somewhere. photograph by Cape Fear Museum of History and Science, Wilmington, NC

Seabreeze reaches peak popularity in the 1950s. Tourists can book a room at the Daley Hotel, the Hotel Faison, or the Breeze Inn. They can take their meals at the Edgewater Cafeteria or the Tavern, where they can also dance. A new resort takes shape in 1951. Lulu Freeman Hill and her husband, Frank, relocate from Queens, New York, to a tract of land she owns in common with other heirs. The Hills invest their life savings of $30,000 in building Monte Carlo by the Sea, the most ambitious resort hotel yet, a brilliant structure of whitewashed cement featuring a pavilion, bathhouse, and restaurant with dining porches shaded by striped awnings.

Now the beachgoers come not only from inland counties but also from South Carolina and Virginia: social clubs, Boy Scouts and Girl Scouts, church groups. Seabreeze — also known as Freeman’s Beach — attracts people from all walks of life.

Assata Shakur (née JoAnne Byron), granddaughter of Frank and Lulu Freeman Hill, moves there as a child in 1950 with her parents. Her job is to stock the coolers with sodas, keep the potato chip racks full, and set the tables at Monte Carlo — and collect 50 cents per automobile at the entrance to the graded parking lot. She recalls in her memoir, “A lot of poor people came to the beach.” Many are farm laborers from inland communities. “Usually a lot of little children were with them and they wouldn’t have bathing suits. They went swimming in whatever clothes they had worn to the beach, and half the time the little kids wore nothing. Then there were those who came to put on airs, usually in the evening, all dressed up to eat dinner.”

And the food was delectable. “When I think of the fried chicken and fish dinners, my mouth starts to water,” Shakur remembers. “But what really sends me off is remembering those seafood platters with fish, shrimps, oysters, deviled crab, clam fritters, and French fries with lettuce and tomatoes on the side. If my memory is any good, I think they sold for $1.50.”

For many who come, Seabreeze is their first taste of the seashore. “One of the moving things for me was when someone saw the ocean for the first time,” Shakur writes. “It was amazing to watch. They would stand there, in awe, overpowered and overwhelmed, as if they had come face to face with God or with the vastness of the universe.”

And because of the lively music at all the juke joints and the open use of bootleg liquor, the resort attracts another kind of visitor. “Then there were the goodtimers,” she writes. “Their cars smelled like whiskey. They would dance a lot, eat a lot, spend a lot on the piccolo, and many times I would wonder if they had made it home all right.”

Pulsing dance music is the heart of Seabreeze: Dinah Washington, Chuck Berry, Big Maybelle, Little Richard, and other hot performers blare from the jukeboxes, and players like the Bobby Blue Band and Bo Diddley keep the pavilions jumping with live music. Fats Domino and James Brown check in at the Lofton Hotel for gigs in Wilmington, where they are not permitted to stay in the segregated hotels.

The hot beach music created by black performers has jumped the race line, and its driving beat — heard now in Carolina Beach, Myrtle Beach, and other Carolina coastal towns — becomes the heartbeat of a new phenomenon that the disc jockeys are calling “rock ’n’ roll.”

But midway through its heyday, disaster strikes Seabreeze. As the 1954 beach season comes to a close, on October 15, Hurricane Hazel slams ashore just southwest of Seabreeze — battering the resort with an 18-foot storm surge and winds of up to 140 miles per hour. All along the North Carolina coast, buildings are torn apart, streets and towns flooded, fleets of fishing boats wrecked in broken piles.

At Seabreeze, the result is utter devastation: structures knocked down or washed away, piers reduced to a line of ragged pilings, the beach and soundside deeply eroded by the onslaught of water. Among the casualties is the Monte Carlo. “It had taken away everything,” owner Frank Hill recalls. Few of the owners carry insurance, and those who try to rebuild have to contend with two more hurricanes the following season — Connie and Ione.

Some owners, undaunted, rebuild their hotels and dance halls. But the old glory is gone. Seabreeze never quite recovers. The newly dredged Carolina Beach Inlet continues to ruin the shellfishing grounds with sediment and causes greater erosion of the beach — more than a thousand feet of waterfront is lost. The music plays on for another decade and a half, ever fainter, until at last Seabreeze goes silent.

The author is grateful for the help of Ann Freeman; William Freeman, and Rebecca Taylor, Manager of the Federal Point History Center.