WATCH BELOW: Scroll down or click here to learn about the history of North Carolina’s state boat.

A working boat is a thing of beauty. The design may come from the eye and instincts of a single talented craftsman, or it may evolve over generations of hard use that refine out all that has proven unnecessary. What’s left is a craft with a sound hull shaped for the waters in which it will cruise and rigged efficiently for the kind of work it will do — rugged and reliable enough to stand up to wind and weather, and carry its crew safely out to the fishing grounds and back home again.

You can spot this boat a long way off by the graceful, curving upsweep of its bow, known as the “Harkers Island flare.” It’s no frill but a functional design element that allows for a clean, fast run through choppy sound waters and makes for a broad working foredeck and side decks. The flared design is attributed to Brady Lewis, who built the first of these boats in Salter Path and then moved to Harkers Island between 1922 and 1926. One of his 1946 creations, the restored sink netter Jean Dale, is displayed at the Core Sound Waterfowl Museum & Heritage Center. And the Lewis name is still prominent among island boatbuilders. “My father [Burgess Lewis] built boats. He built ’em in the backyard, and I was the oldest of four brothers, so I had to end up helping him,” recalled Jamie Lewis in 2016, the year that he, his brother Houston, and his son James received the North Carolina Heritage Award. “I just saw how it was done by watching him, helping him, and I just tried it on my own, and that’s the way I got started.” The Lewises modify their designs to suit a boat’s intended use, from workboats to sport boats, and they rarely work from formally drawn plans. “With big boats, we sketch out the plan on a piece of plywood,” James explained in a 2016 interview. “But after the sketch, the boats are pretty much made from an image in the head.” 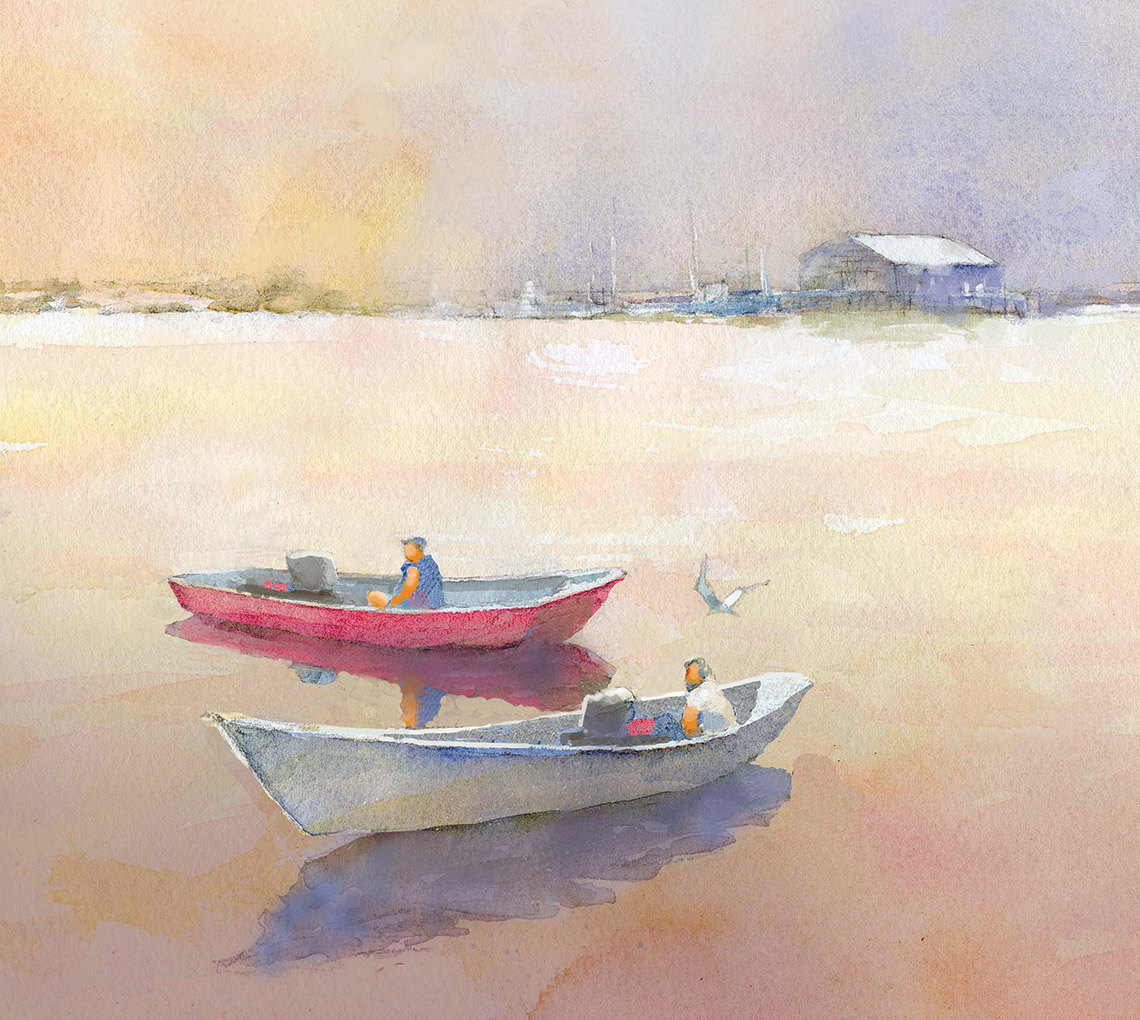 These flat-bottomed boats with a hard chine — that is, an angled hull with little rounding — are the workhorses of shallow waters and come in various sizes and configurations, depending on their use. Their distinguishing feature is the well, a boxy opening inside the hull — or simply a cutout made by moving part of the stern forward — where the outboard engine is mounted. Michael B. Alford, in Traditional Work Boats of North Carolina, explains, “The well keeps the engine and propeller away from trawl and dredge warps (towing lines), reducing the chance of costly entanglements that could damage gear and result in time lost from fishing.” Mullet are caught in a “runaround gill net,” which the crew plays out over the stern as the boat circles the school, then hauls back in by hand when it’s loaded with fish. Flounder skiffs need a bit more juice. Alford writes, “Powerful outboard motors mounted in wells built inside the skiff make these boats very swift and enable them to haul large trawl nets or shellfish dredges.”

A high, sharp bow is the signature of the beach dory: a 16- to 18-foot craft launched off the beach into rough surf, powered by an outboard motor hung inside a well and protected by high sides. Dory fishing season runs through October and November, when cold weather and nor’easters — or “mullet blows” — spur the fish into their southbound migration. Piloting a flat-bottomed dory into the teeth of thrashing breakers calls for expert seamanship and old-fashioned moxie. The dory crew carries a seine or gill net — as long as 800 yards — over the breakers into the “lanes” where migrating fish are passing, while a crew on the beach anchors a line attached to the net. Once out of the breakers, the dory crew circles a school of fish — blues, sea trout, striped bass, Atlantic croaker, striped mullet — and deploys the seine in a U-shape, the two wings ending in a bag where the fish are trapped. The beach crew ties its end of the rope to a truck — or, in bygone days, a team of horses — and hauls the heavy bag ashore. 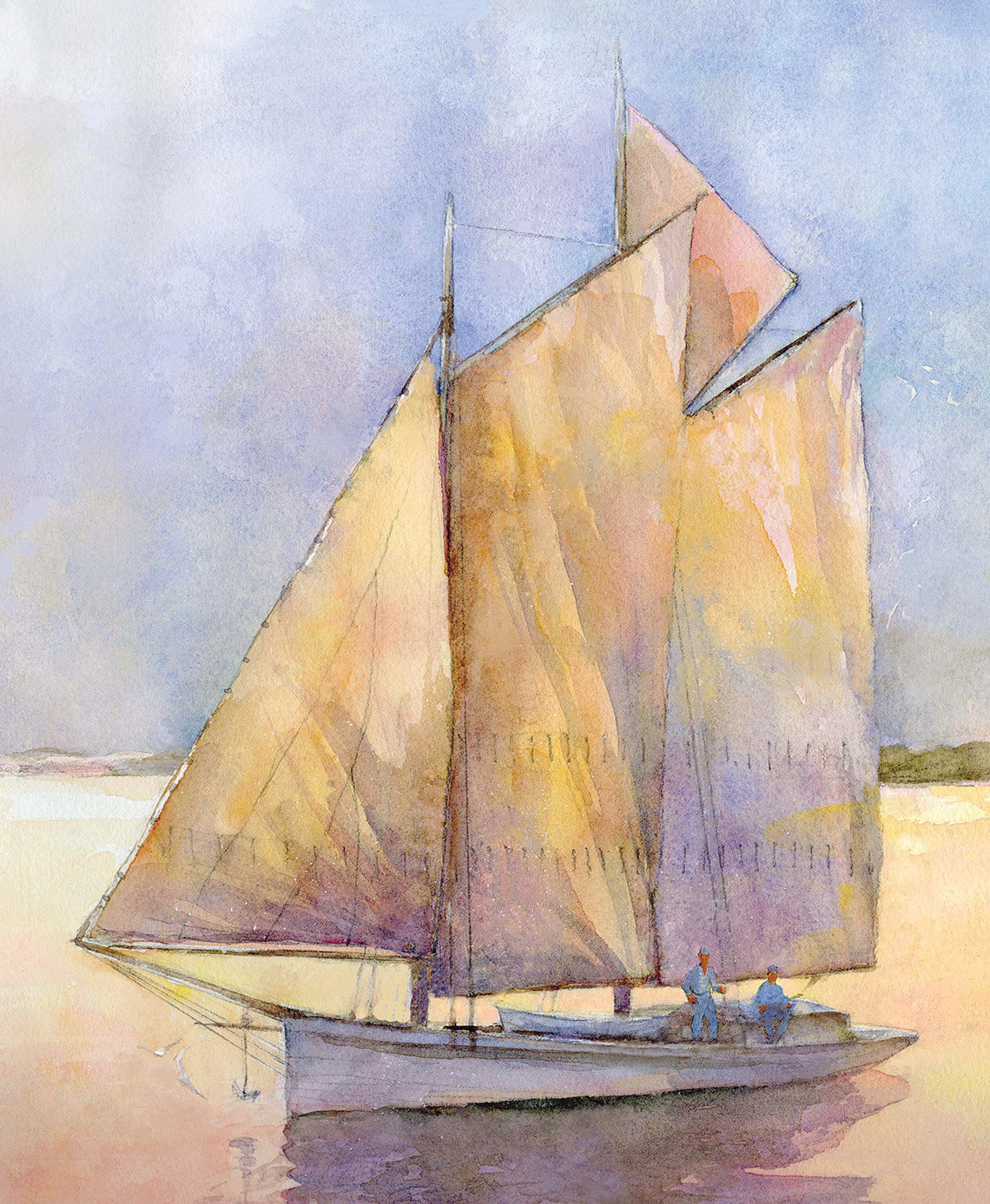 The first sharpies appeared in New England: narrow, flat-bottomed boats suited for tonging oysters in shallow waters. In 1874, George Ives moved to Beaufort from Connecticut, intending to ship fresh fish and oysters on ice. The following year, he returned home to commission two sharpies because he knew that they’d be more efficient than the kunners, or dugout log boats, that North Carolina watermen were using. When a local named Daniel Bell challenged him to a race, Ives’s sharpie left Bell’s boat trailing in her wake. Bell was a convert and soon built his own sharpie, the Julia Bell. The flat-bottomed, cross-planked design allowed any Down East waterman with a modicum of carpentry skill to construct his own boat cheaply and quickly; soon, hundreds were built in backyards along the coast. Remarkably versatile, the sharpie also was used for hauling cargo, mail, and passengers, and evolved into a larger hull with more sail-power. Eventually, it was reconfigured as the gaff-rigged Core Sound Sharpie Schooner. 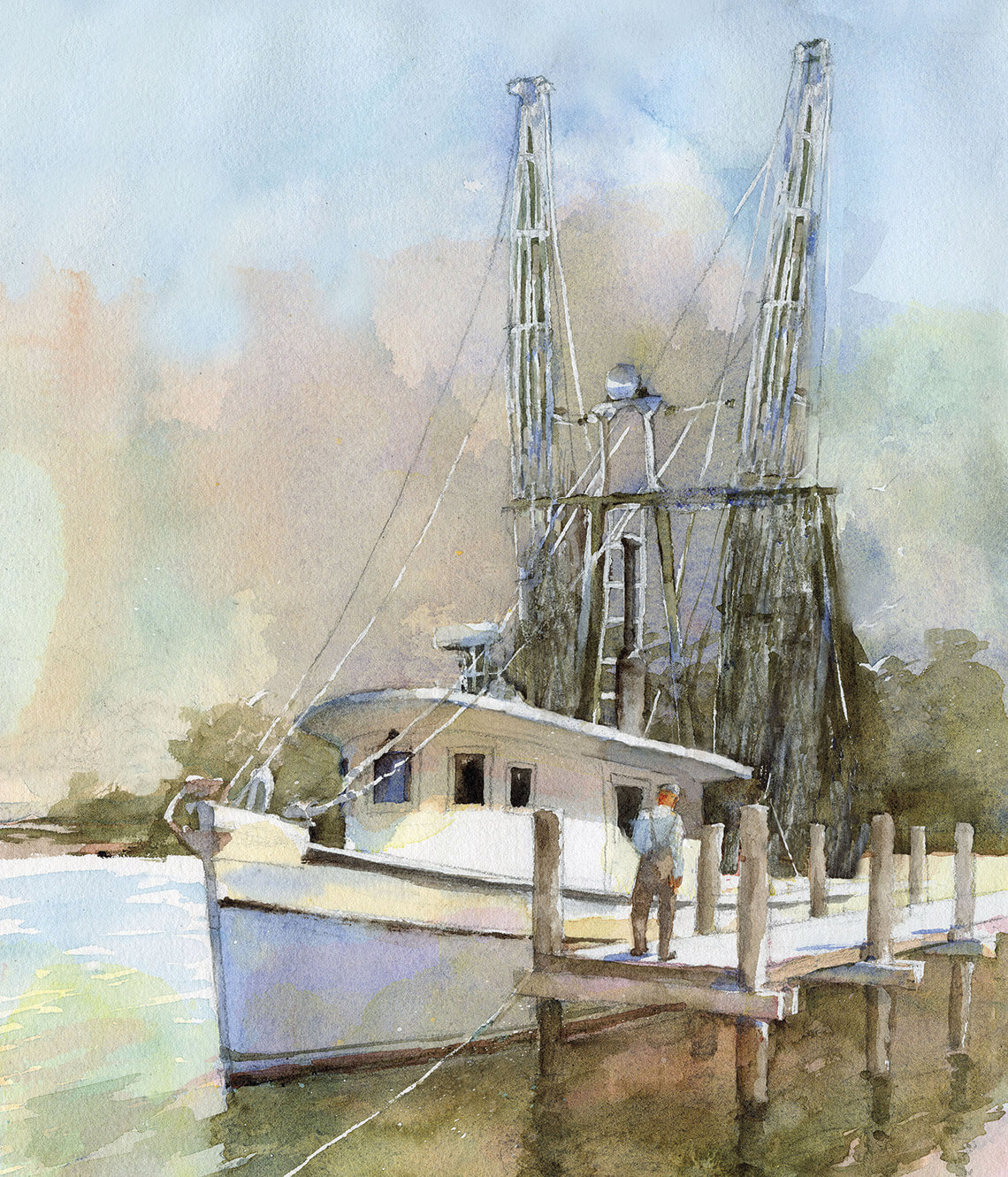 There’s some nautical irony in the fact that the largest, most complex of the traditional fishing boats is used to catch one of the sea’s smallest creatures. The typical North Carolina trawler is 30 to 80 feet long with a high bow and deck bulwarks, a pilothouse forward, and a working deck aft. Large, flat “doors” hold open the two wings at the mouth of the trawl net as it scoops up shrimp. (Some smaller vessels pull two 30-foot skimmer nets, which do not require doors.) Two strong outriggers allow for a double trawl, or even a quad-rig, or “four-barrel,” trawl, using smaller, more controllable nets than the traditional single trawl net used in the 1950s. A turtle excluder device fitted into the neck of the net allows turtles, sharks, and other large fish to escape. As a trawler cruises by at walking speed, its powerful Caterpillar engine hauling the heavy nets behind, its outriggers spread like great wings, it carries an air of stately pride. 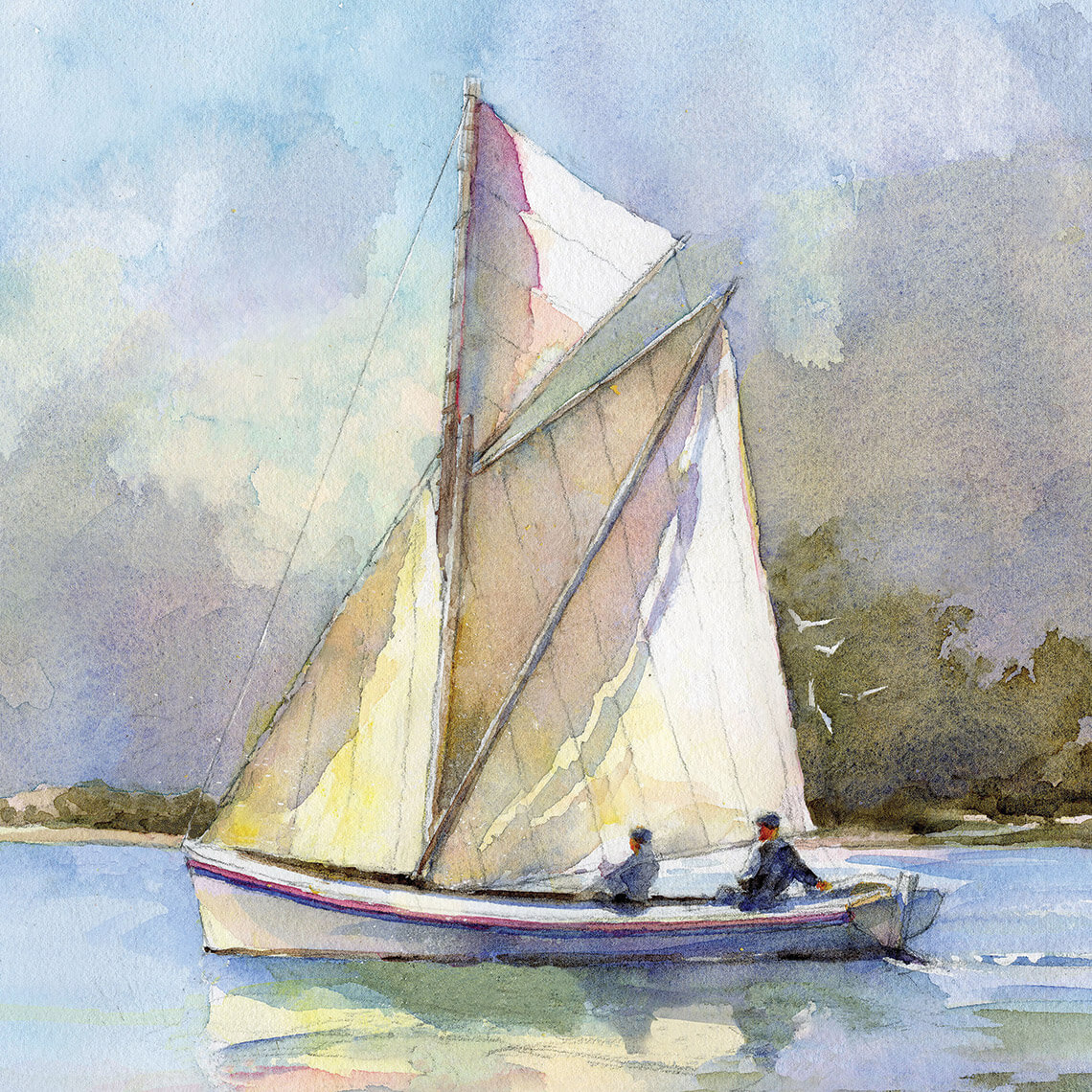 The shad boat is the graceful belle of the fleet, a shallow-draft boat with a high bow to take rough seas and a broad bottom for stability. The keel was made from a split log of rot-resistant Atlantic white cedar, locally called juniper. On a frame of naturally curved juniper knees, the boat was sculpted from the top down with a deep fore-and-aft curve ending at a heart-shaped transom. The main spritsail hung low and broad off a light, diagonally running spar, giving the boat power to carry pound-net gear to the fishing grounds and haul back the catch. That shape was first carved as a half-hull model sometime in the 1870s by George Washington Creef Sr., a lean, bearded man affectionately known on Roanoke Island as Wash. He became the most famous builder of the shad boat, crafting two at a time. The unplanked center well held plenty of fish, and when the fishing was done, some commercial fishermen used the boats for “proggin’” — carrying groceries or freight, courting their own belles across the sound, even running bootleg liquor. In 1987, the legislature declared it the state historical boat.

WATCH: Learn about the history of the shad boat.

The North Carolina Maritime Museum in Beaufort serves as a Hall of Fame for our state’s traditional wooden boats. Visit the museum to view exhibits on sharpies, shad boats, and more, then cross the street to watch boatbuilders at work at the Harvey W. Smith Watercraft Center. (You can even sign up to take a boatbuilding course.) Along with its sister locations in Hatteras and Southport, the Maritime Museum tells the story of our working waters. Learn more at ncmaritimemuseums.com.