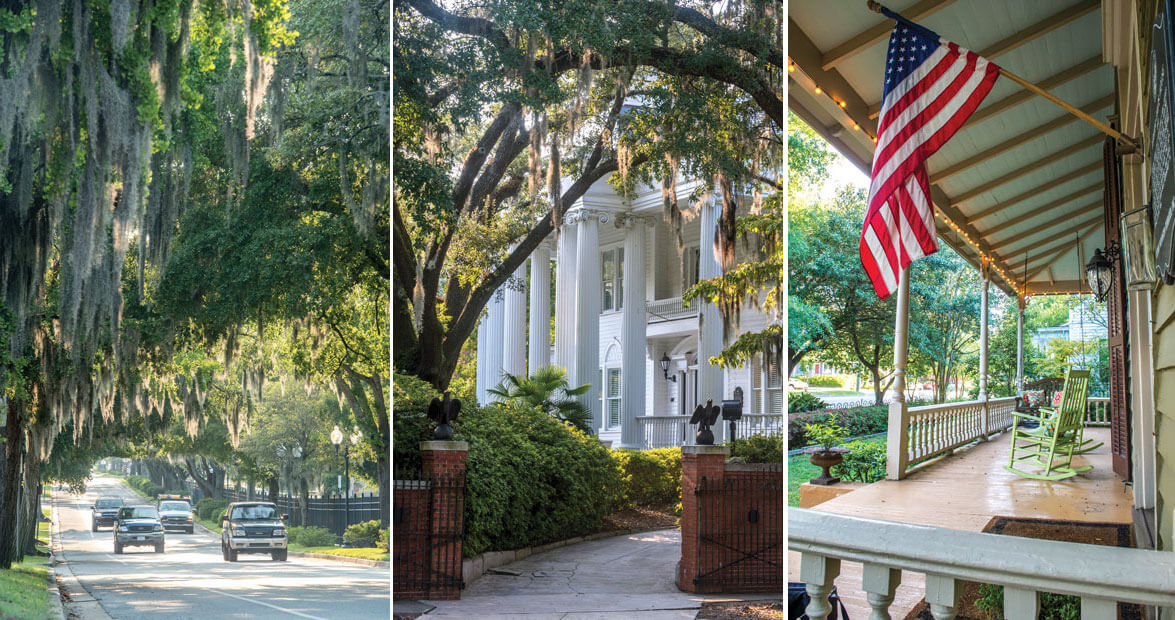 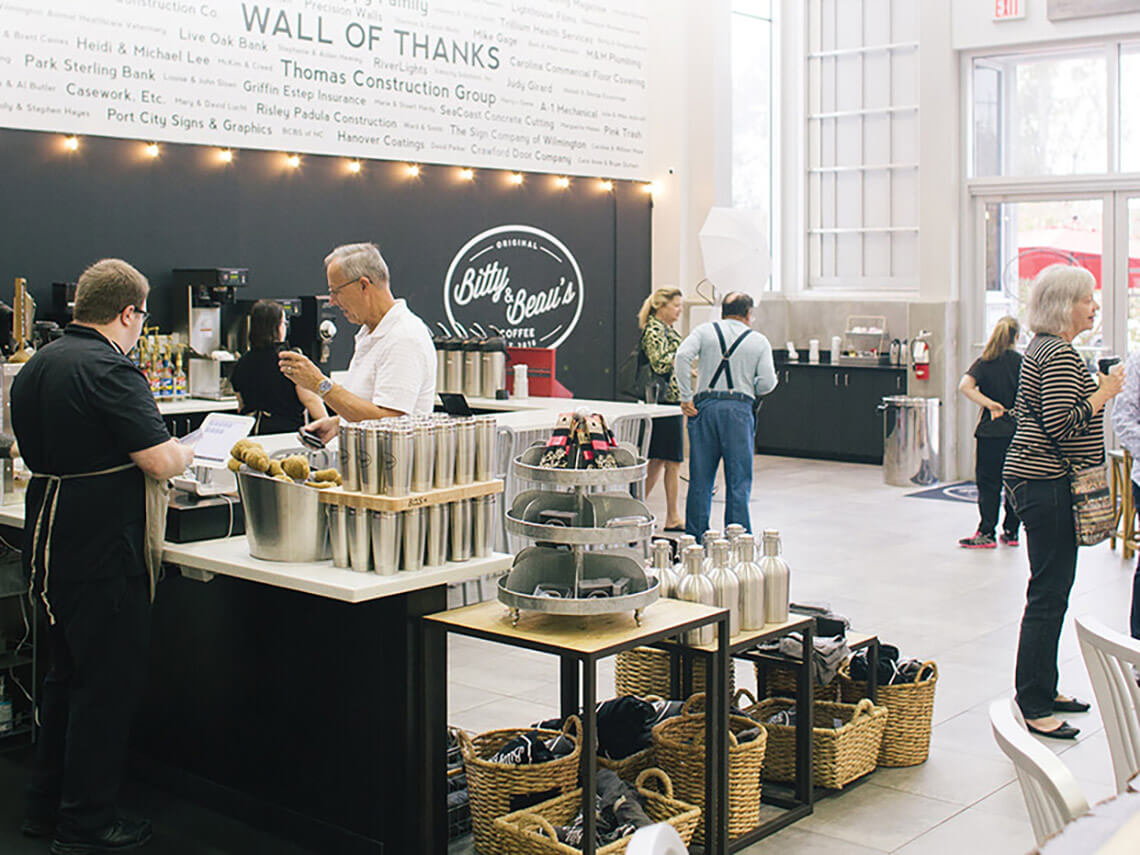 Bitty & Beau’s Coffee. Sure, coffee lovers come to Bitty & Beau’s for steaming lattes and frothy cappuccinos, but they’re equally drawn in by the café’s mission. Realizing a need for people with intellectual and developmental disabilities (IDD) to find employment and purpose, Amy and Ben Wright opened their coffee shop — named for their two youngest children, who have Down syndrome — in January 2016, employing 19 workers with IDD. Read more.

Casey’s Buffet. At Casey’s, the fried okra is so important that, on the buffet, it’s in the same spot as the meats. People travel from up North to eat the catfish and get called “darlin’” at this “Southern-seasoned feed-a-thon.” Yes, pigs’ feet are on the buffet, every day. Read more.

Jester’s Cafe. What started as a coffee shop in 2005 has morphed into one of Castle Street’s most beloved restaurants. The café is best known for its Sunday brunch, featuring dishes like French Toast Casserole, which is baked, sliced, and loaded with sweet toppings.

One Belle Bakery. Here, where the science of baking rises to an art form, cakes become extraordinary sculptures worthy of the weddings, showers, and birthdays they’re made to celebrate. Read more. 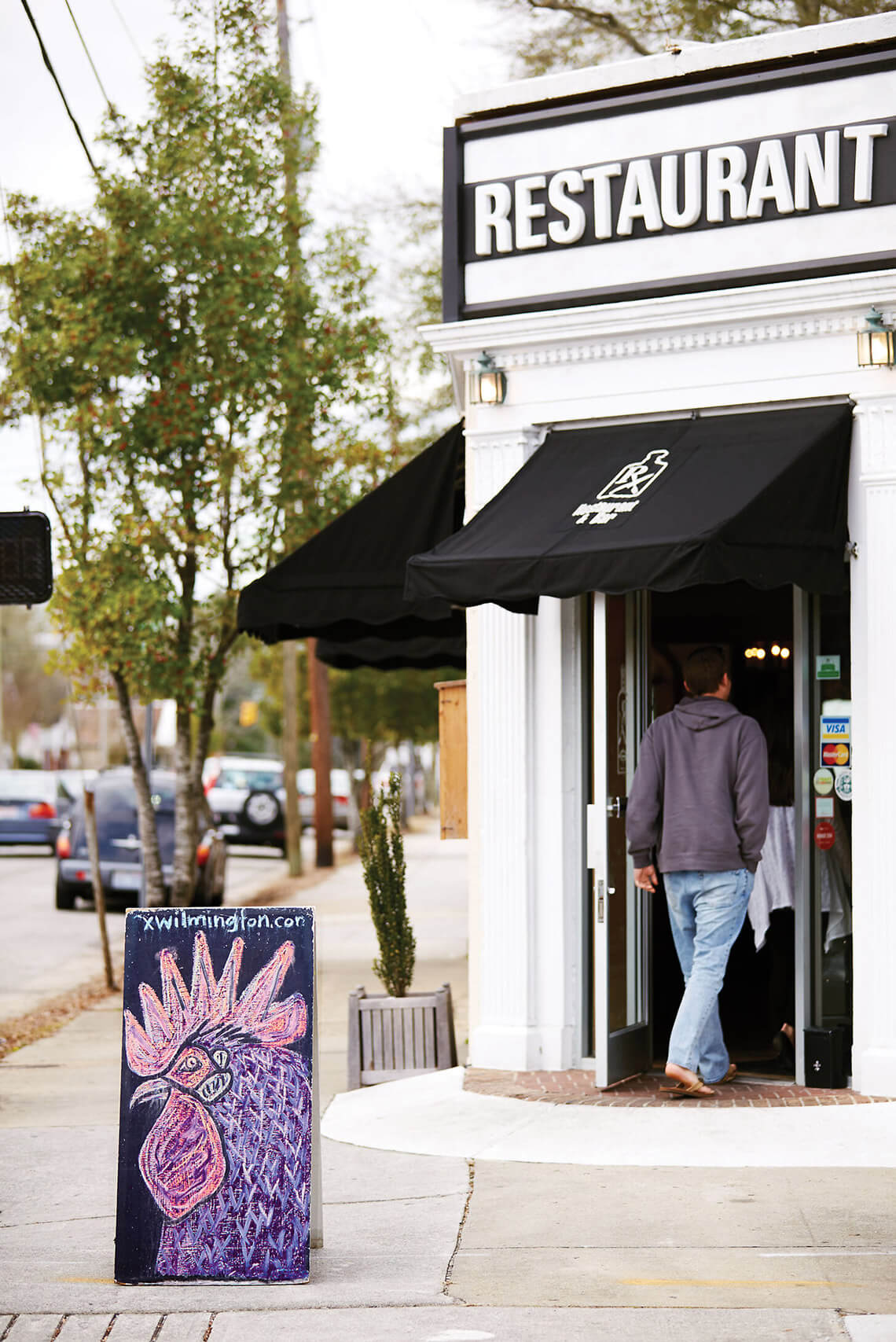 Rx Restaurant and Bar. James Doss, managing partner of Rx and its sister restaurant, adjusts the menu with the seasons, depending on what’s available from area farms. During the summer, for example, Rx’s signature shrimp and grits might include fresh corn, tomatoes, and bacon. In the winter, Doss uses fennel, mushrooms, and andouille sausage. Read more. 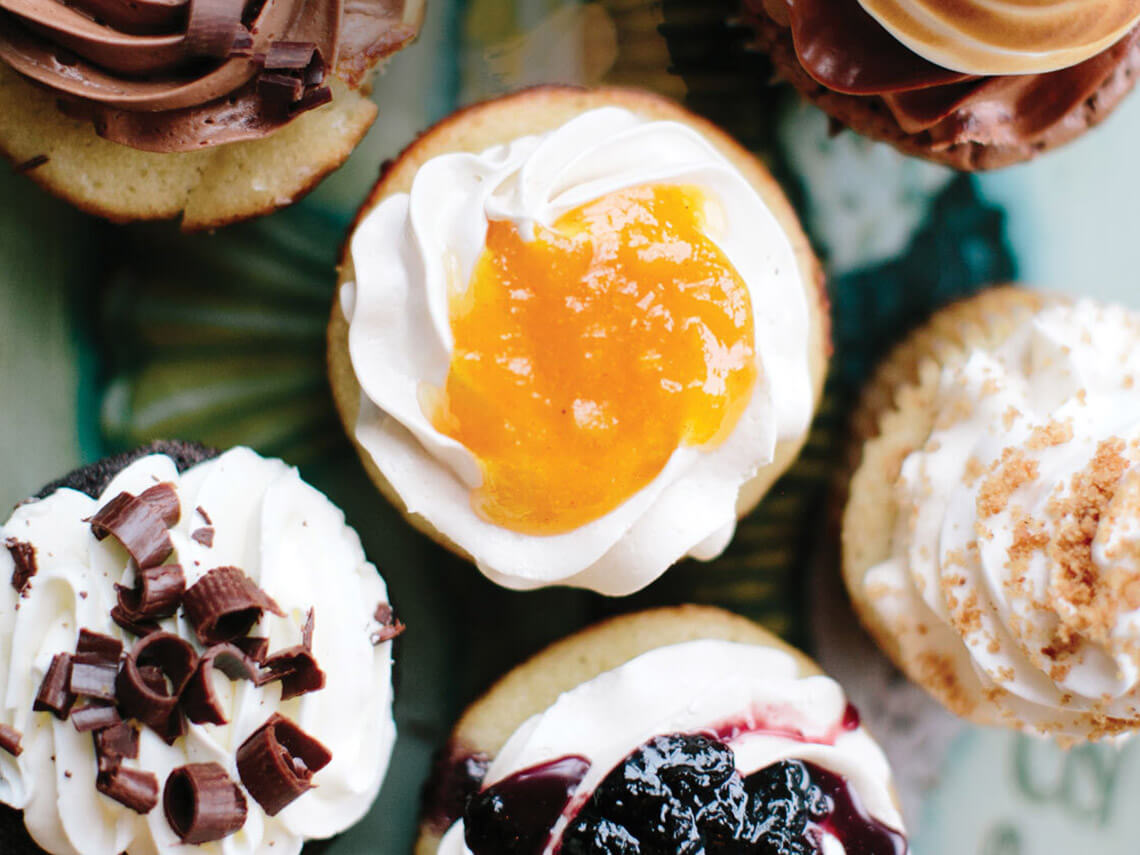 The Peppered Cupcake. The buttercream was an accident. Tabitha Meready was experimenting in her kitchen, and she’d gotten distracted. While her back was turned, the mixer transformed powdered sugar and butter into something incredibly light and smooth.

At Meready’s downtown Wilmington shop, The Peppered Cupcake, that magic buttercream is the crowning glory on light, moist cupcakes in flavors like peach-and-lavender cobbler and banana pudding. Read more.

Edward Teach Brewery. In the Brooklyn Arts District, Edward Teach channels the spirit of North Carolina’s most infamous pirate through its Blackbeard-themed taproom. When walking up to the counter, take note of the bar itself — it’s shaped like the prow of Queen Anne’s Revenge. Behind it, the 10 tap handles bear Blackbeard’s flag. Embrace the unique theme by ordering an equally unique brew: black lager. 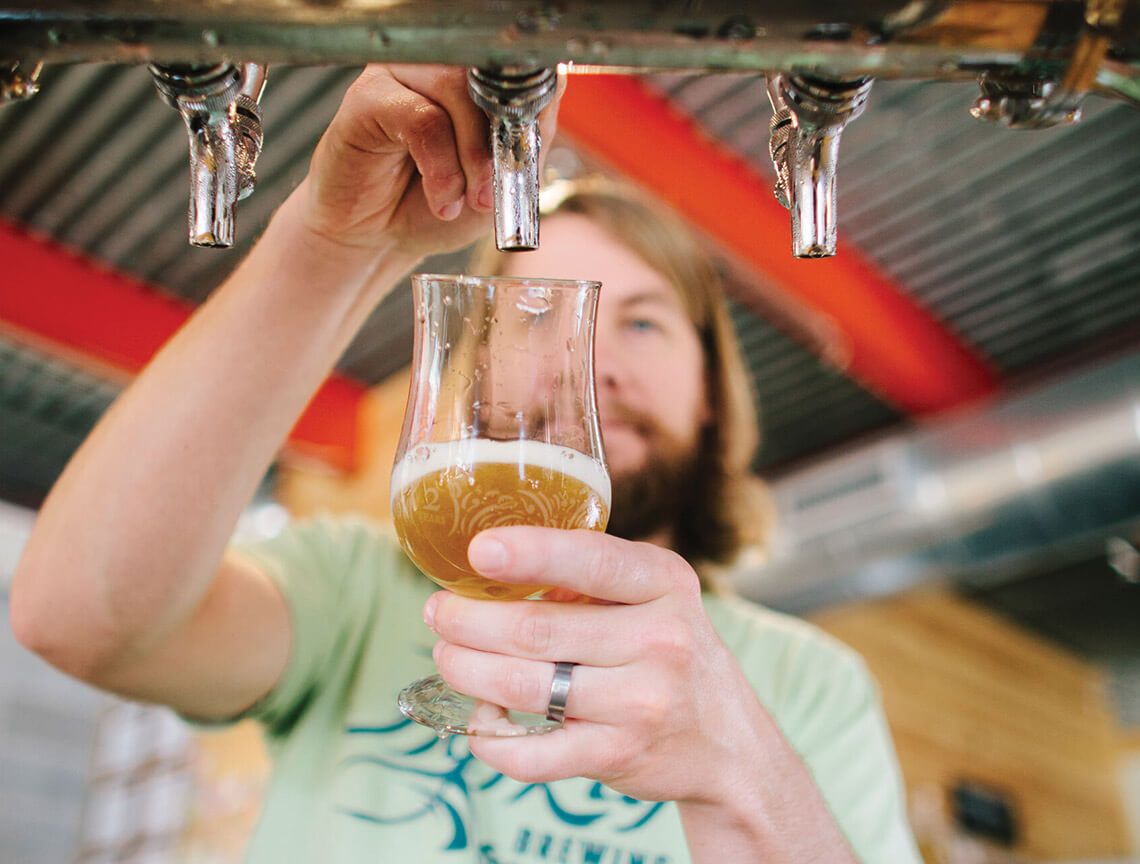 Of Flytrap’s dozen taps, at least eight are dedicated to house-brewed beers, and four to brews that founder and head brewer Mike Barlas and his crew find interesting or inspiring from breweries in Wilmington, from across North Carolina, and occasionally beyond. Read more.

Front Street Brewery. No tour of Wilmington’s breweries is complete without a visit to this landmark institution, which introduced the city to craft beer when it opened in 1995. The equal balance between flagship and seasonal beers means there’s plenty of variety without sacrificing crowd-favorites, such as the Riptide Raspberry Wheat Ale. In addition to beer, the brewery boasts one of the most impressive selections of whiskey in the state. 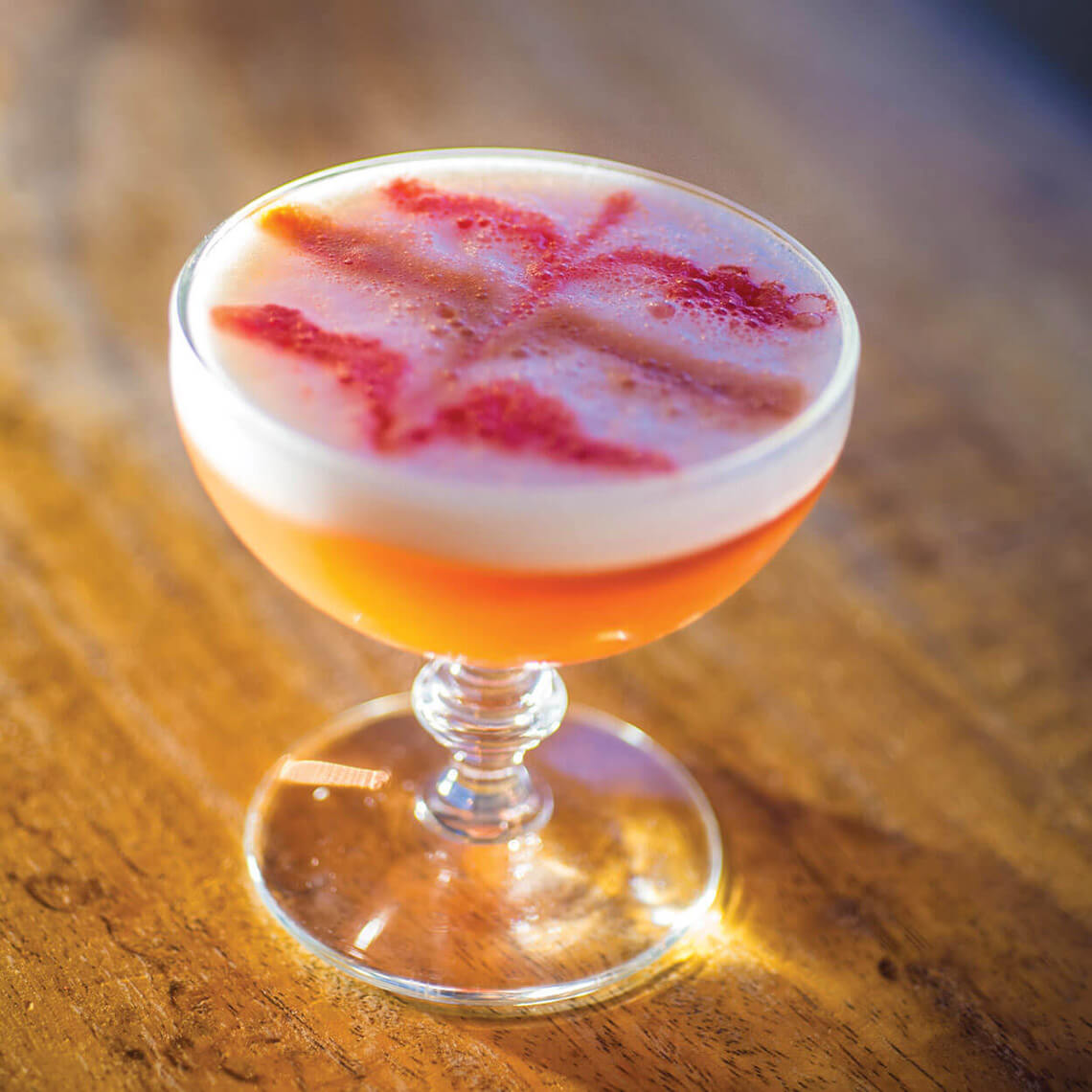 Manna. The ever-evolving cocktail menu at manna is something of a synecdoche, a tiny sampling of what might be created for you on any given visit; special off-menu requests and vague cravings are honored, encouraged, even revered. “Bartender’s Choice” is also a reassuring option, described variously on different menu iterations as “Give us some guidance and let us take care of the rest,” “See where the night takes you,” and simply “Trust us.” Really, the first thing you feel in this place is care. Read more.

Waterline Brewing Company. Take in a unique view of the Cape Fear Memorial Bridge — from underneath it — at the aptly named Waterline Brewing Company. An easy-drinking seasonal brew, such as the Lemon Ginger Gose or Mango Kölsch, is a refreshing complement to an afternoon of cornhole in the beer garden. You can also bring your pint over to the adjacent art gallery and wine bar, The Art Factory, which is open during taproom hours.

Wrightsville Beach Brewery. A commercial fisherman and home brewer united his passions and fulfilled a dream with a brewery committed to drinking — and eating — local. Read more.

Cape Fear Museum. Through artifacts relating to history, science, and culture, this museum tells the story of a region, starting with one of its oldest residents: At the entrance stands a replica of a giant ground sloth, whose bones were excavated near what is now Randall Parkway.

Cape Fear Playhouse. In 2009, after 12 years of performing in rented spaces, local theater company Big Dawg Productions found a home in the former Friendly’s department store on Castle Street. Today, the 50-seat theater hosts not only the company, but also performers who need to rent a space, just like Big Dawg once did.

Greenfield Lake Amphitheater. Host to both local and touring musical acts, this concert venue manages to be at once intimate and spacious, surrounded by trees and open to the night sky.

New Elements Gallery. You’ve probably seen artwork from New Elements on the big (or small) screen — they’ve been a supplier for Wilmington’s TV and film industry for years. Stop in to see their rotating exhibitions of more than 60 local and regional artists.

Gravity Records. Since opening in 2004, Gravity Records has made a name for itself as an independent music store selling rare, vintage, and contemporary vinyl. But owner Matt Keen’s dedication to music goes beyond records: After moving to Castle Street in 2013, Keen renovated an old storage room in the back of the shop for live music and other performances.

Jess James + Co. After working in the fashion industry in New York City, local style editor and fashion consultant Jess James opened her shop on Castle Street in 2016, where she hosts fashion shows, style swaps, and trunk shows. Her boutique is filled with her favorite vintage clothing and accessories, as well as antique books and prints.

Michael Moore Antiques. Known as the “ambassador” of Castle Street for his role in developing the district, Michael Moore has been selling antiques since the 1980s. His store specializes in lamps and light fixtures, but you can also find furniture, toys, and collectibles. 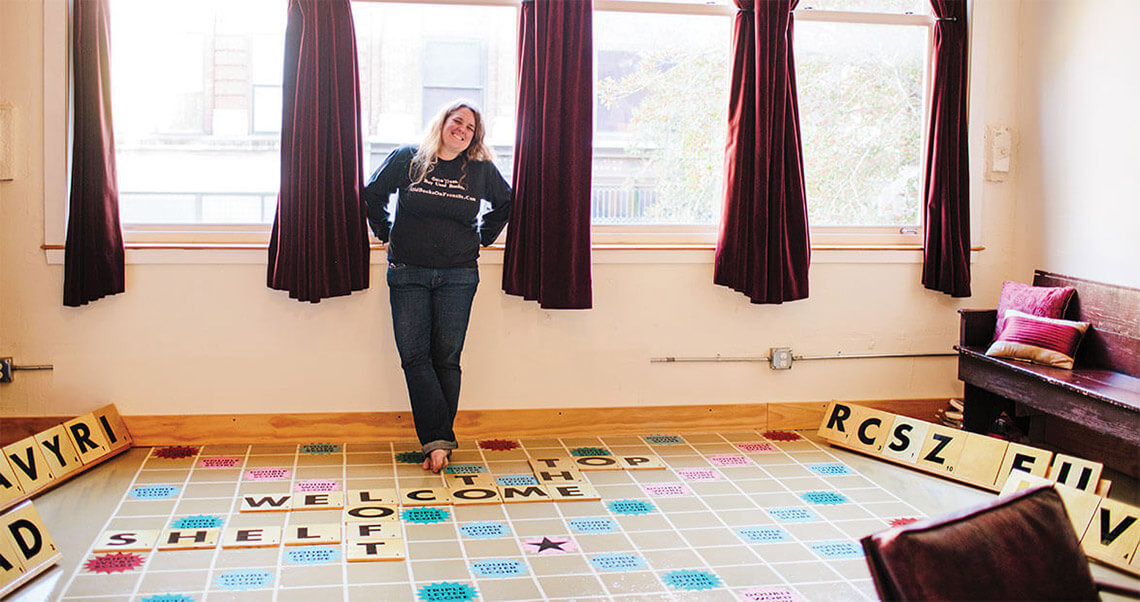 Old Books on Front Street. Browse books in the century-old building or maybe just take one of those books upstairs and stay the night. With a full kitchen, bathroom, and room for up to six people, the loft is a unique concept in downtown Wilmington, and in the state. It’s not every night that you get to sleep in a bookstore, after all. Read more.

Whatever Wilmington. Styled as a “pop culture curiosity shop,” Whatever Wilmington is as much museum as it is store: Browse movie and TV props and memorabilia, comic books, posters, vintage toys, and oddities you never knew existed. 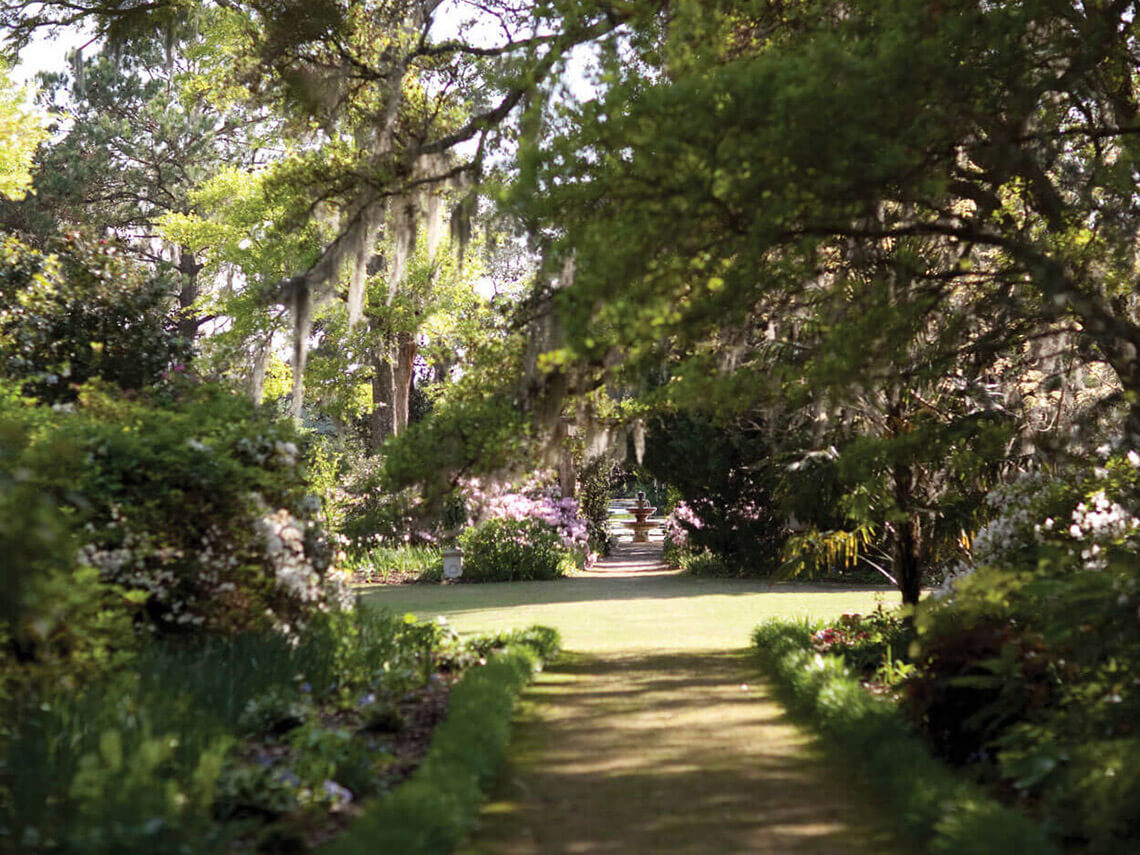 Airlie Gardens. Airlie Gardens offers visitors the opportunity to step back to the wonder of the gilded age — and to look forward as well. Follow the lake road, and take note of the large coquina pillars. Today, a causeway supports the tramway. But look with softer eyes, and the road disappears, making it possible to imagine the old, wooden bridge. In the lake, swans paddle, dipping their heads to the water and bending to preen. Turtles bask on logs, and shore birds wade. Read more.

Bellamy Mansion. Twenty-two rooms. Four stories. Ten thousand square feet. Don’t be surprised to see this Neoclassical work of art — one of the state’s best examples of antebellum architecture — on a drive down Market Street. Stop by for a tour to learn about the family who built it.

Wilmington Riverwalk. Take in the views of historic downtown and the Cape Fear River.