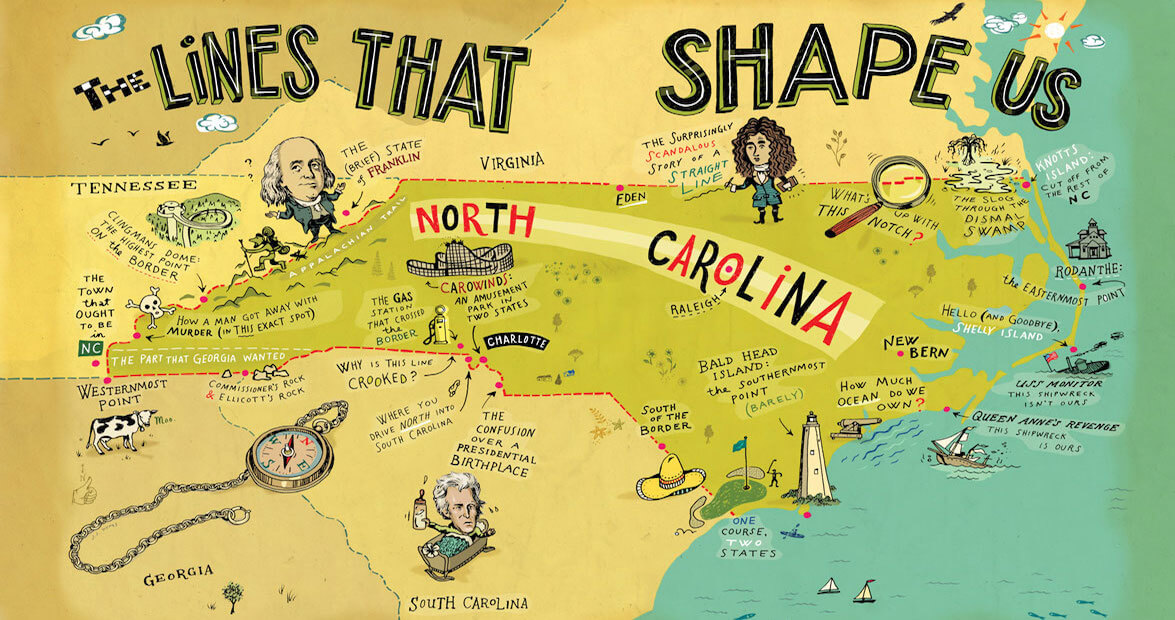 There could’ve been no North Carolina mountains, you know.

I mean, the mountains would still be there. But they could have been somebody else’s mountains. The only reason they’re ours is because, 200-plus years ago, our state lawmakers decided that western North Carolina should end on an exact set of ridgelines high up in the Appalachians. Of course, those same legislators could have said, meh, we don’t need anything past the Catawba River, which at the time was plenty far away from the capital in New Bern. What then? Tennessee would have a Nashville and an Asheville. No Biltmore Estate for us. No Smokies. All because someone decided to put an invisible line somewhere else.

The original design of North Carolina’s borders was a purposeful thing, with very specific instructions. But in practice, the actual drawing of the lines was a hot mess. If things had gone according to plan, Gaffney, South Carolina (the town with the giant peach-shaped water tower), would be in North Carolina; Waxhaw and Wadesboro would belong to the Palmetto State. At one point, we were this close to going to war with Georgia; had we lost, they’d have gotten part of Transylvania County — which, today, doesn’t even run along the Georgia border. If, on an August day in 1819, a group of men high in the Unicoi Mountains hadn’t run out of whiskey — ahem, allegedly — then we would own what today is known as Ducktown, Tennessee, and boom, we’re a copper mining state.

The Virginia border? They did get that one right. But still.

The original design of North Carolina’s borders was a purposeful thing, with very specific instructions. But in practice, the actual drawing of the lines was a hot mess. photograph by John S. Dykes

It’s safe to assume that if a portion of our border is weird-looking, it has a really good story behind it. And we found plenty of good stories along North Carolina’s edges: There was a pompous Virginian who somehow was able to turn a story about surveying into a salacious best seller. There is an ordinary brass disc that has become an extremely niche tourist attraction. There was a guy who shot another guy dead in cold blood — and, thanks to the border and an untested loophole in the law, got away with it. (Note to the vengeful: The loophole is now closed.) In the east, the border is as ever-shifting as the sands, and with new islands come new possibilities. In some places, the border is not where we thought it was, and in just the past year and a half, people moved from one state to another without moving at all.

We love our state lines, which is obvious from the number of things we emblazon with the silhouette of North Carolina: T-shirts, doormats, hats, mugs. The shape instantly turns tchotchkes into totems of our identity. In reality, out there in the woods and sandhills, up on mountains and down in gullies, our borders are mostly hidden from us — but not from history.

Sure, they’re fallible, as all man-made things are. But today, in this state, so diverse in geography and history, in race, culture, and creed, every single one of us has one thing in common: We all live inside these invisible lines. And in that basic, simple way, we’re all in this thing together.

The stories that follow explain not only how North Carolina got its shape, but also the shape our borders left us in.

That Time When North Carolina & Georgia Went to War
The Walton War was fought over land that nobody wanted and that Georgia’s militia couldn’t even reach.

Welcome to Ducktown, Tennessee
A lack of whiskey on the part of a group of surveyors may be to blame for one Tennessee town being on the wrong side of the state line.

How a Tar Heel Moonshiner Got Away with Murder (in 1892)
Spoiler alert: The loophole that he used has since been closed.

What Happens When Cartography Enthusiasts Show Up at Your Door
A.D. Patterson owns the westernmost part of North Carolina, and the “mapheads” want to visit.

The Gas Station That Switched States
The gas station stayed in place, but its address shifted North.

The Border That Binds Us
Carowinds crosses over both Carolina borders, and — almost — holds more significance than amusement.

A Series of Unfortunate Events
You had one job, royal surveyors.

The Short, Remarkable Life of Shelly Island
For a few short months, it was the hottest new tourist attraction on the Outer Banks.

Remote or Knott
People sometimes ask, “Where am I?” when they reach Knotts Island. Usually, they’re serious.

On This Golf Course, Both Carolinas Are in Bounds
On Calabash’s Farmstead Golf Links, golfers can tee off in South Carolina and putt in North Carolina — on the same hole.

William Byrd’s Burn Book
William Byrd II of Virginia was one of the surveyors in charge of physically drawing the North Carolina/Virginia state line. He was not, however, a fan of North Carolinians, as his writings reveal.