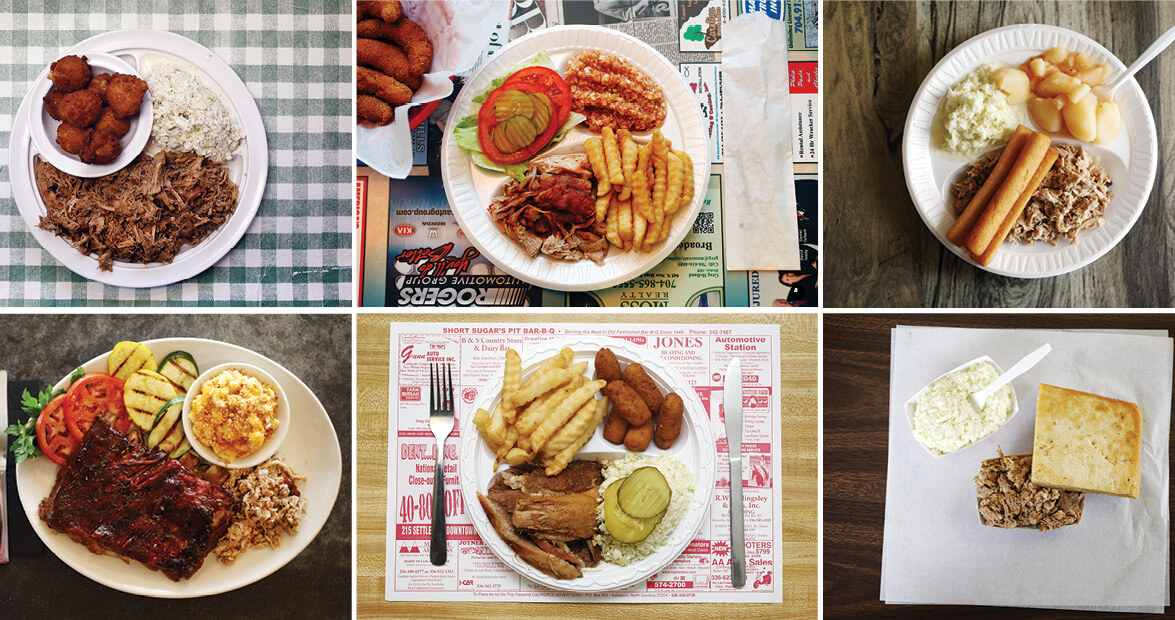 As of January 2019, we have discontinued our BBQ NC app. We have compiled some of our favorites to help you continue to navigate North Carolina’s barbecue scene. Stay tuned for more barbecue content on ourstate.com.

Find barbecue joints in your region. 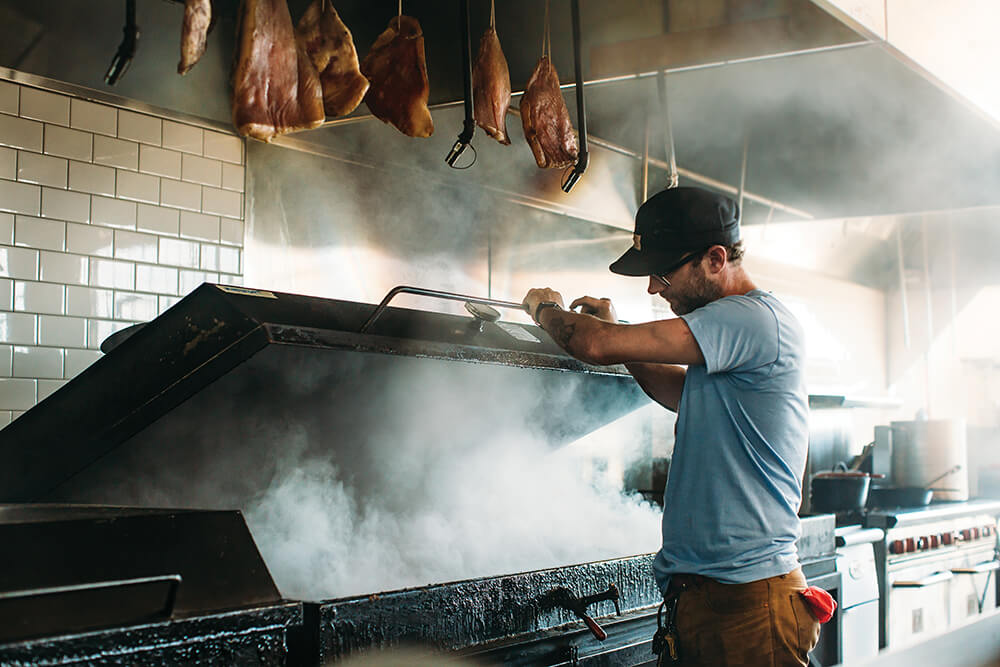 The owners of Buxton Hall Barbecue bring fresh ideas to the table, yet they never lose sight of the whole-hog tradition at the heart of their restaurant.

At Old Hampton Store, eat hickory-smoked barbecue served on sourdough rolls in a historic 1920 general store that was once the original train stop for Tweetsie Railroad.

Just off the Blue Ridge Parkway, Switzerland Café (open spring through fall) offers hickory-smoked barbecue with a signature sauce — a blend of Lexington- and eastern-style flavors. 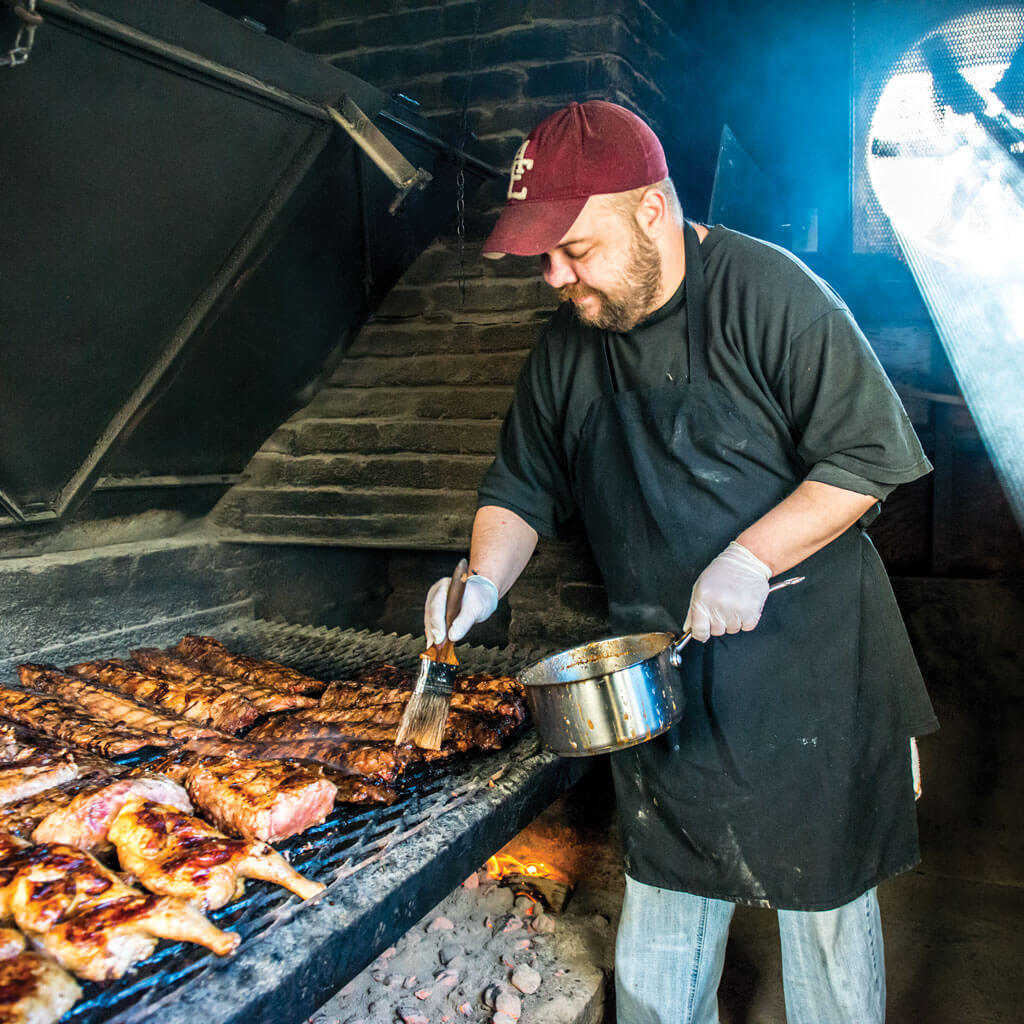 Customers have come to Herb’s Pit Bar-B-Que for more than 30 years for pit-smoked barbecue covered in a “sweet-and-sour” sauce, plus onion rings and four-layer chocolate pie. 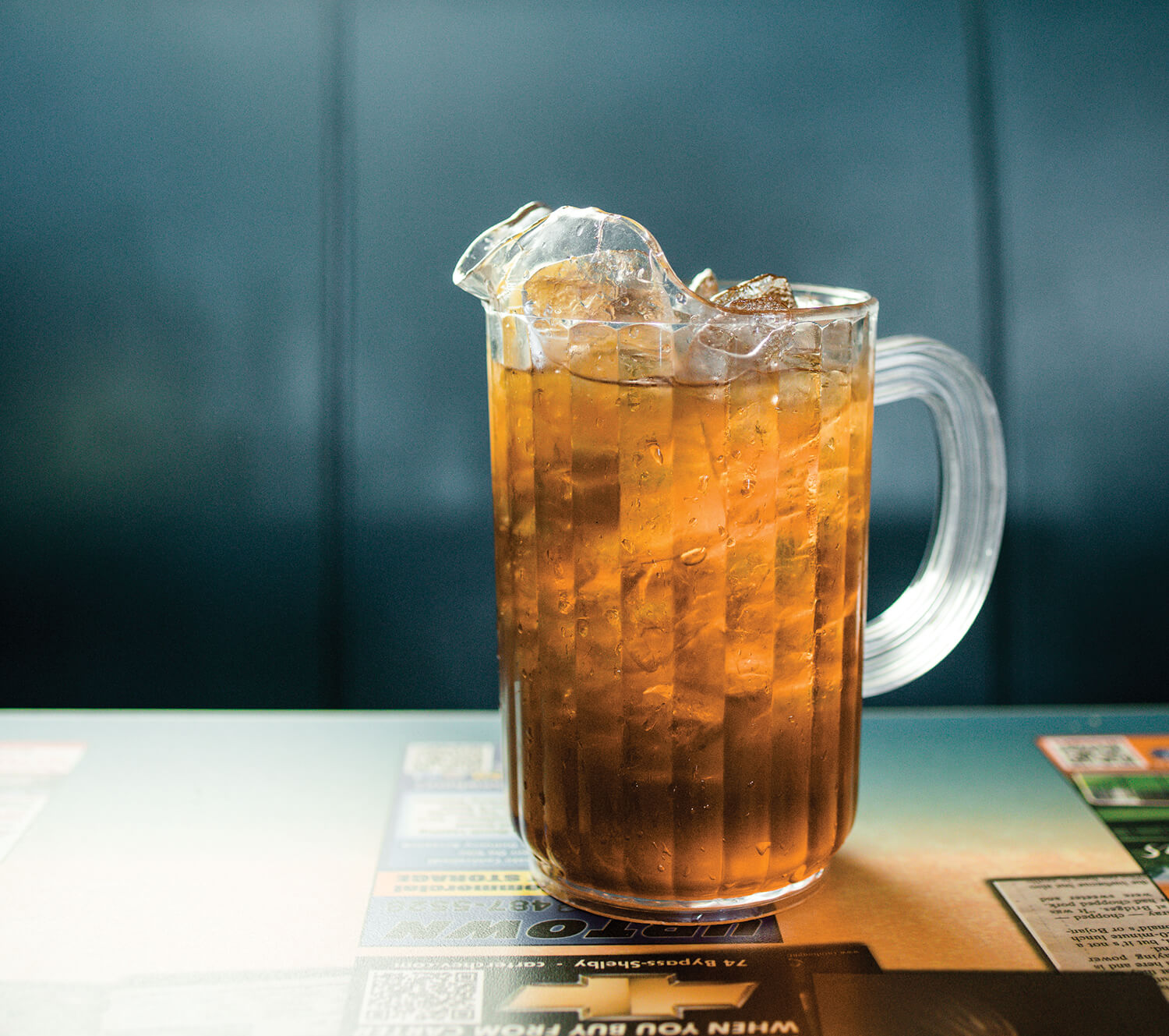 Nothing pairs better with barbecue than cold sweet tea by the pitcherful. photograph by Johnny Autry

Since 1946, customers have come from near and far for tender, hand-chopped pork, painstakingly pit-cooked over a bed of glowing hickory and oak, then slathered in red, Lexington-style sauce. Oh, and for the hush puppies and red slaw. 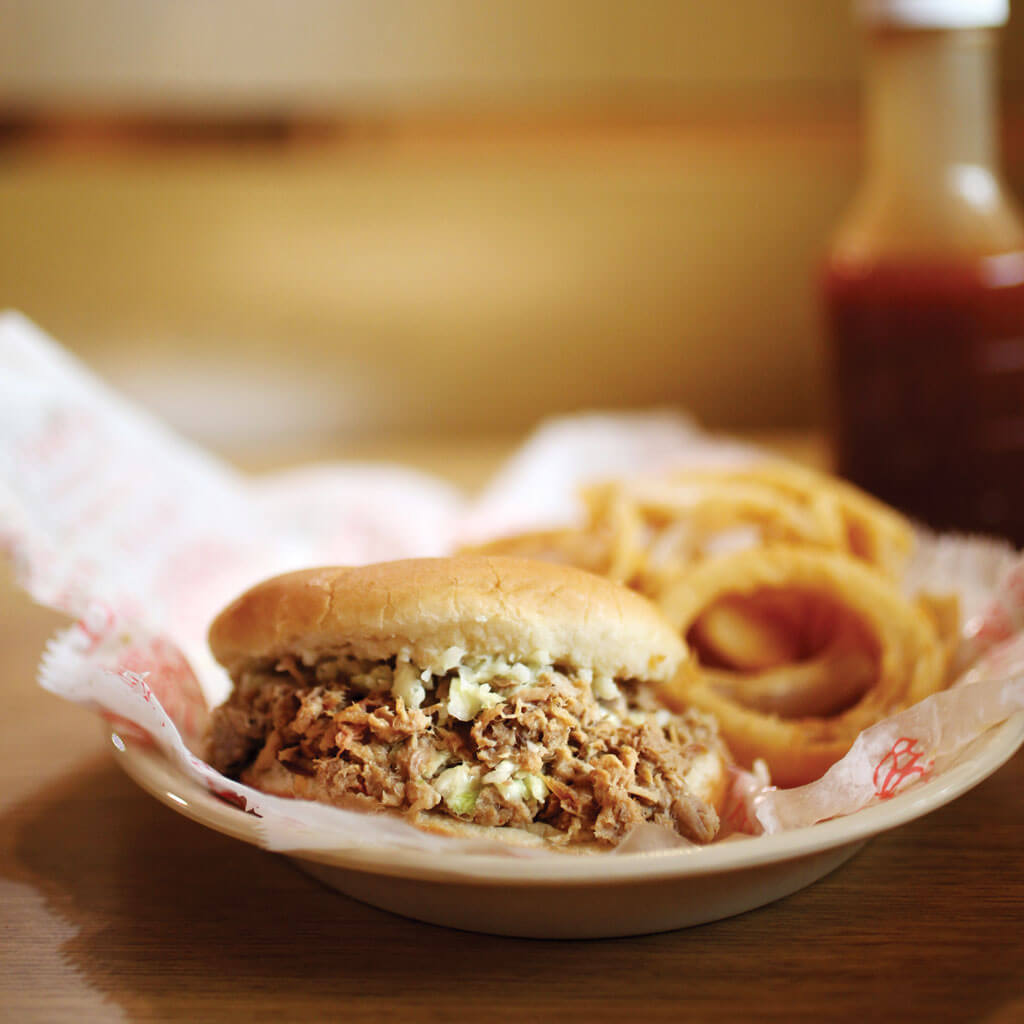 Hursey’s barbecue is legendary — but the onion rings are pretty good, too. photograph by Travis Dove

From its humble backyard beginnings in the mid-1940s, Hursey’s has become something of a pork powerhouse. The hickory-smoked pork shoulders are best topped with Hursey’s Old-Fashioned Barbecue Sauce, which is just a little east of western, and west of eastern. 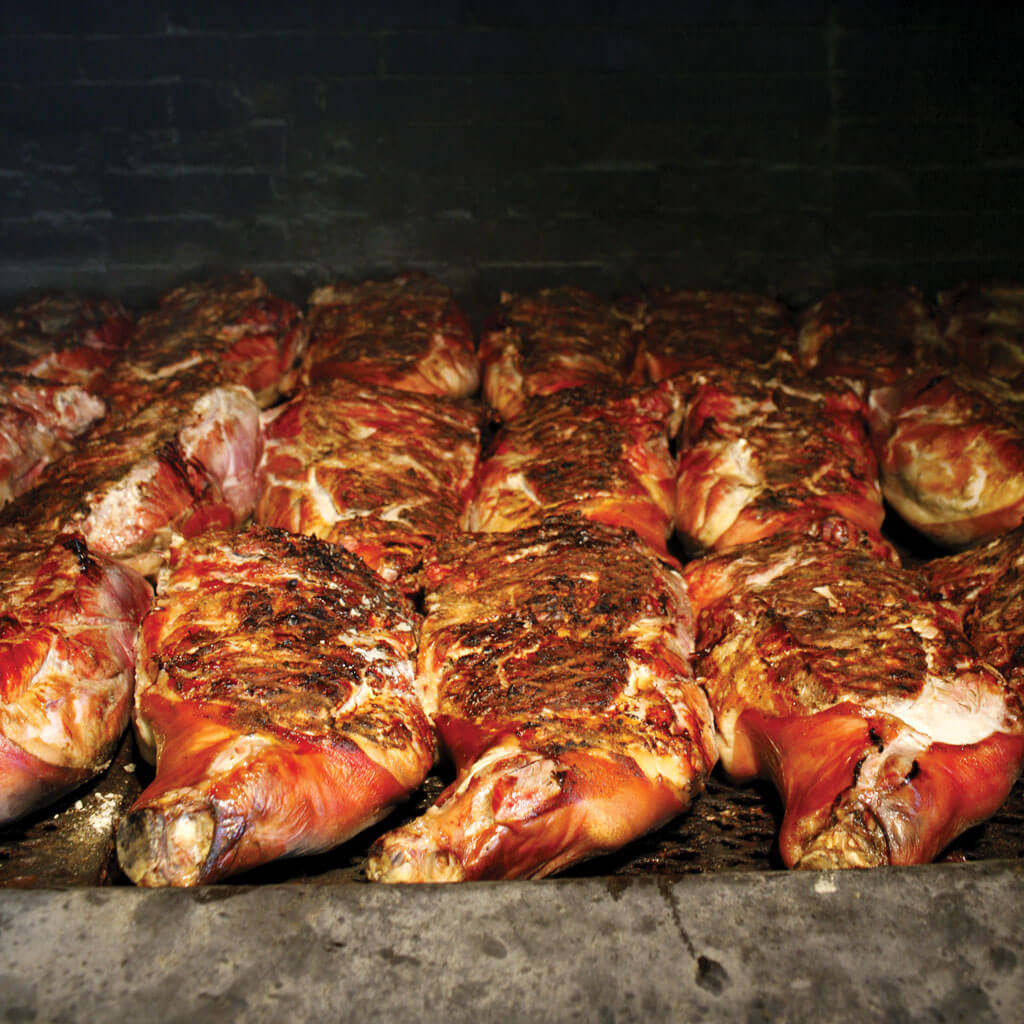 Rows of shoulders line the pit at Lexington Barbecue. After cooking, that “outside brown,” as it’s called, will be lifted off the meat and saved for special orders. photograph by Travis Dove

The meat is the thing here, enhanced to perfection by a dark, thin sauce — or dip — that is neither too mild nor too fiery. 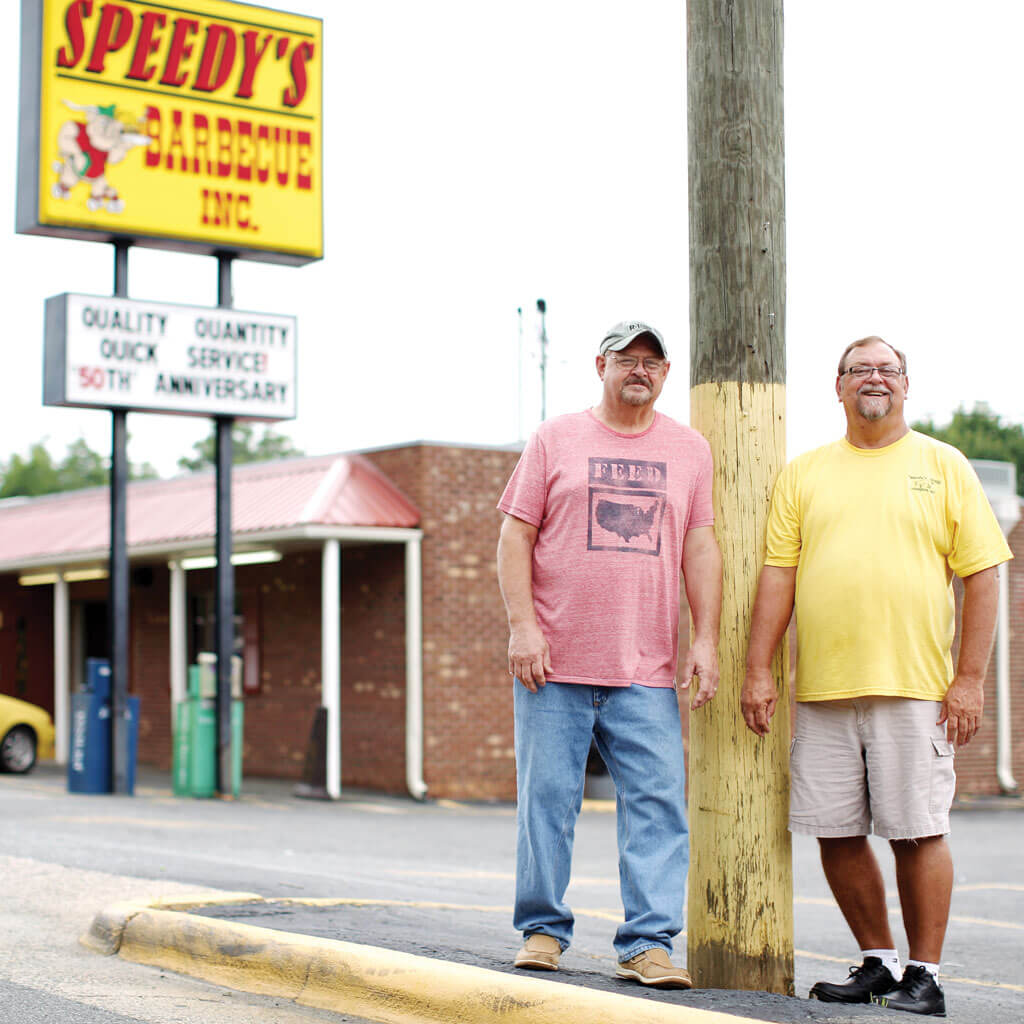 Owners Roy (left) and Boyd Dunn have seen Speedy’s through a half-century of service. photograph by Travis Dove

In Lexington, the city’s namesake-style barbecue — pork shoulder meat dipped in a tomato-based sauce — draws devotees to this former drive-in. 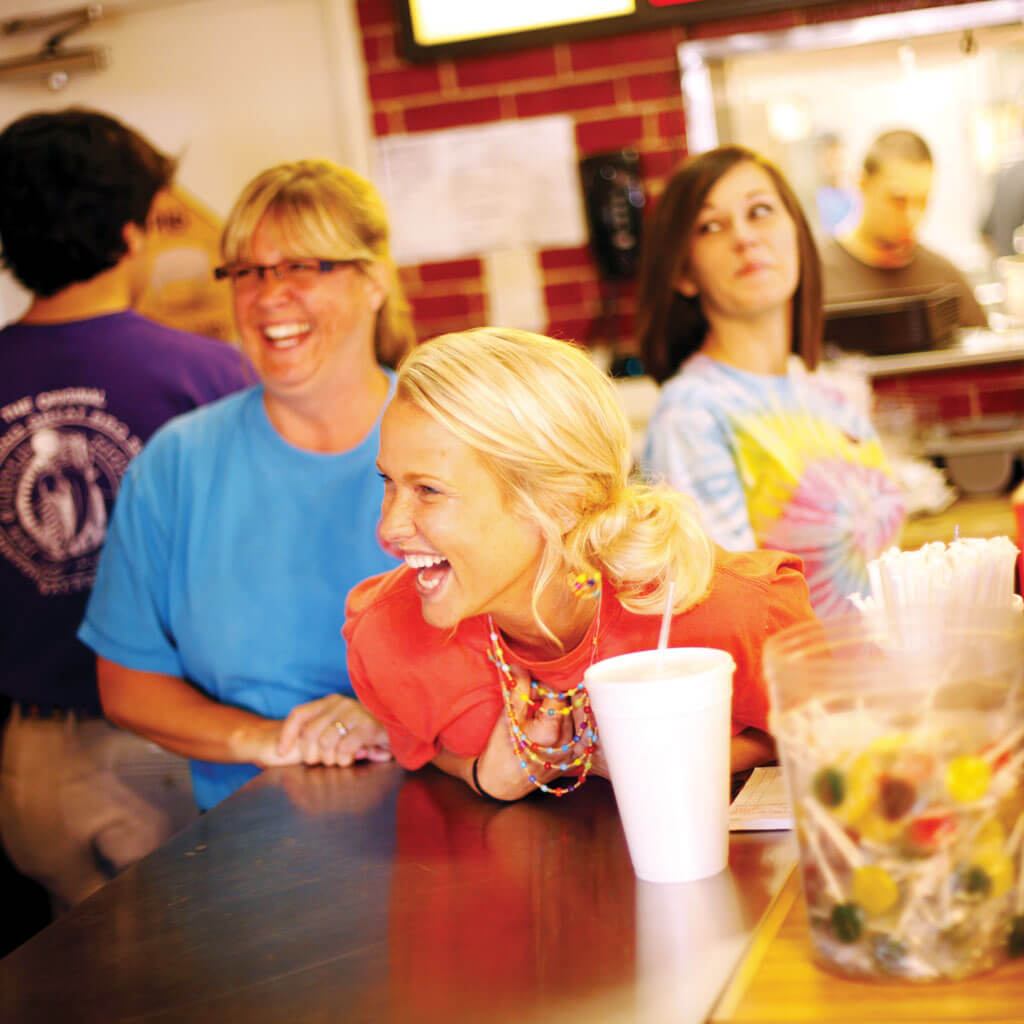 This whole-hog barbecue joint tinkers with tradition, but it still shares time-honored cooking methods with its small-town brethren. 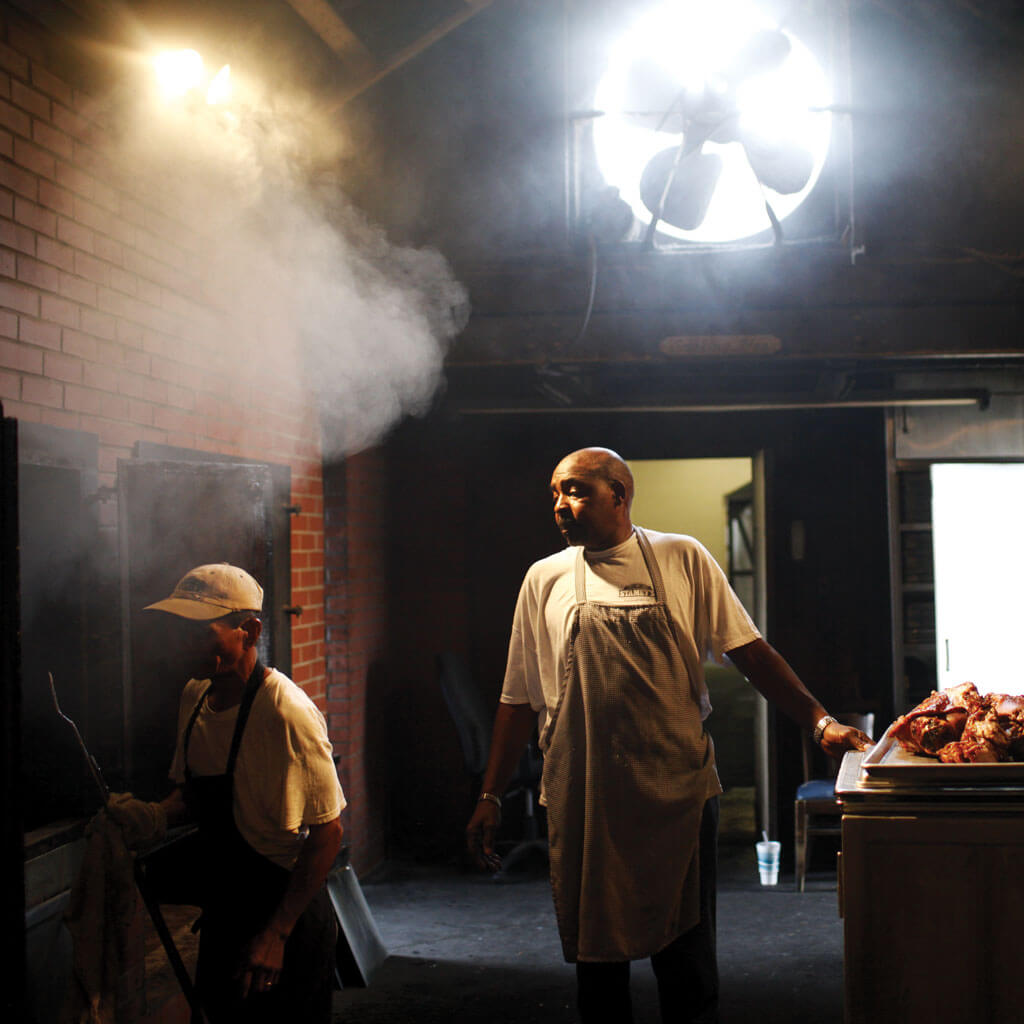 A large fan helps ventilate Stamey’s pit building, which is, by all accounts, one of the largest and best equipped in the state. photograph by Travis Dove

Founded in 1930, Stamey’s is well known for its Lexington-style pit — they cook exclusively over hardwood hickory coals — and its tangy-sweet vinegar-and-tomato sauce.

Fuzzy’s embodies the personality of an Eisenhower-era diner, looking much as it did in 1954, when T.H. “Fuzzy” Nelson opened it. The moist and zesty barbecue is served with long, curvy hush puppies and vinegar slaw.

Clyde Cooper’s has been serving barbecue since it opened on New Year’s Day of 1938, making it one of the oldest barbecue restaurants in the state. Don’t forget to order plentiful sides — collard greens, potato salad, slaw — and make sure to save room for banana pudding. 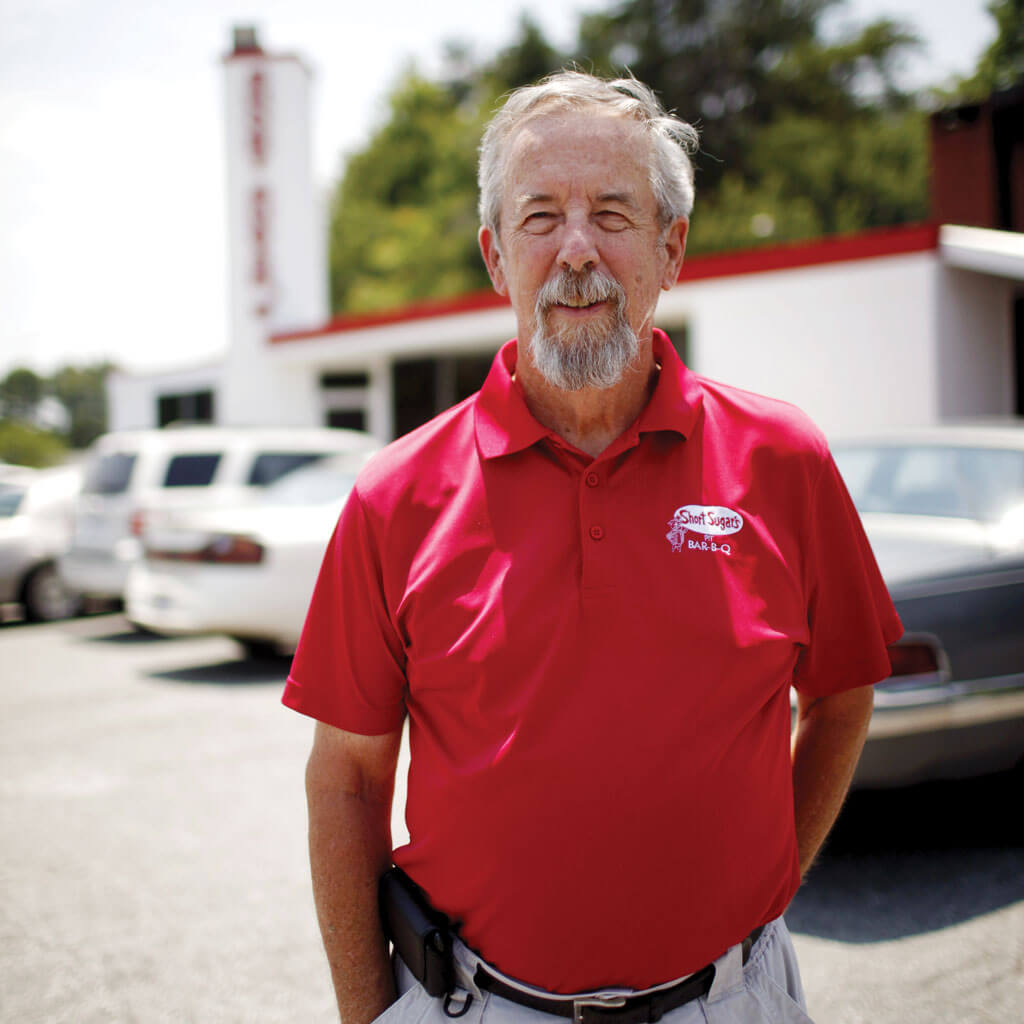 Much of Short Sugar’s reputation comes from its thin, dark sauce, which seems to have less ketchup or tomato paste than other Piedmont dips. 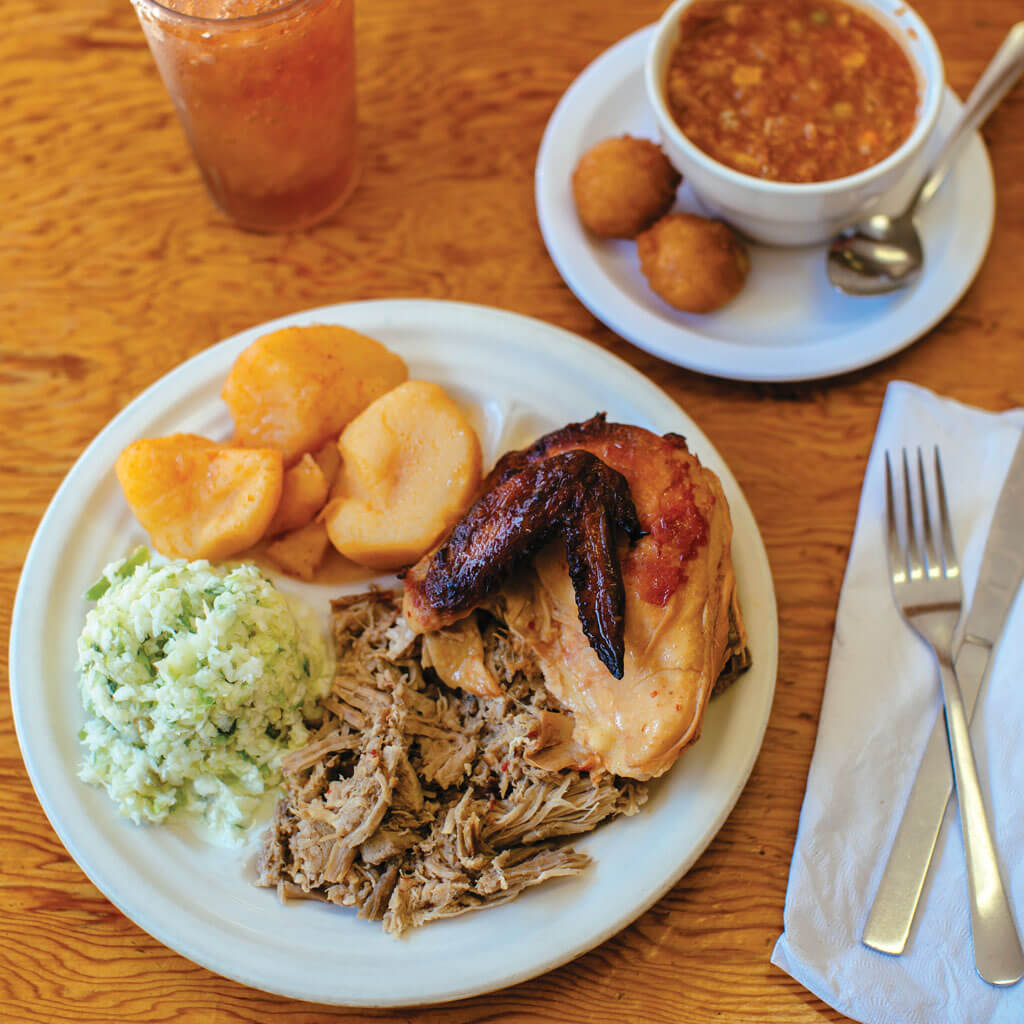 Though Stephenson’s doesn’t cook the whole hog, the restaurant fancies itself an eastern-style establishment, with white coleslaw and a vinegar-based sauce. photograph by Travis Dove

Pulled pork shoulder — pit-smoked over hardwood charcoal — comes with a tangy sauce. The only day the pit isn’t fired up is Sunday, when the restaurant is closed. 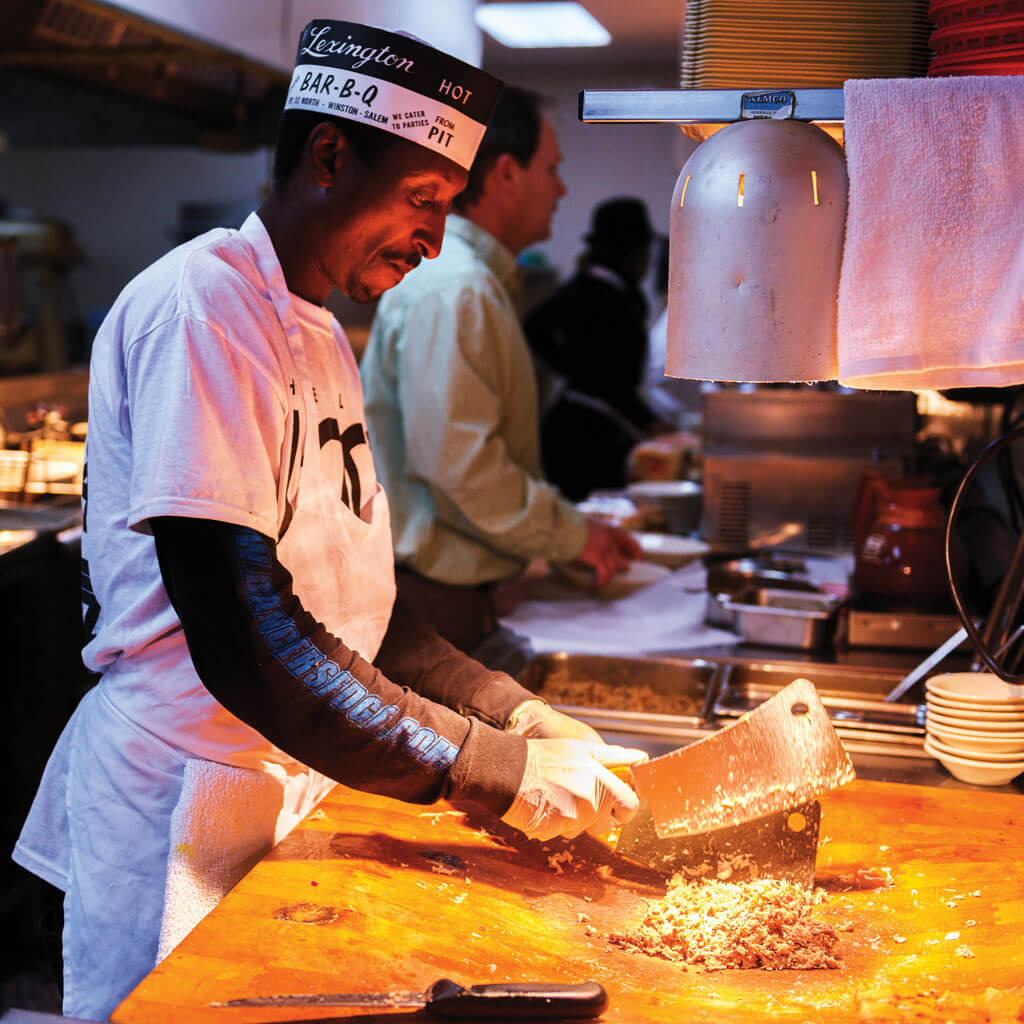 A family-owned and -run restaurant that honors tradition, Hill’s embodies resilience. This joint has been satisfying Winston-Salem residents and drivers on U.S. Highway 52 with their Lexington-style barbecue for more than 60 years. 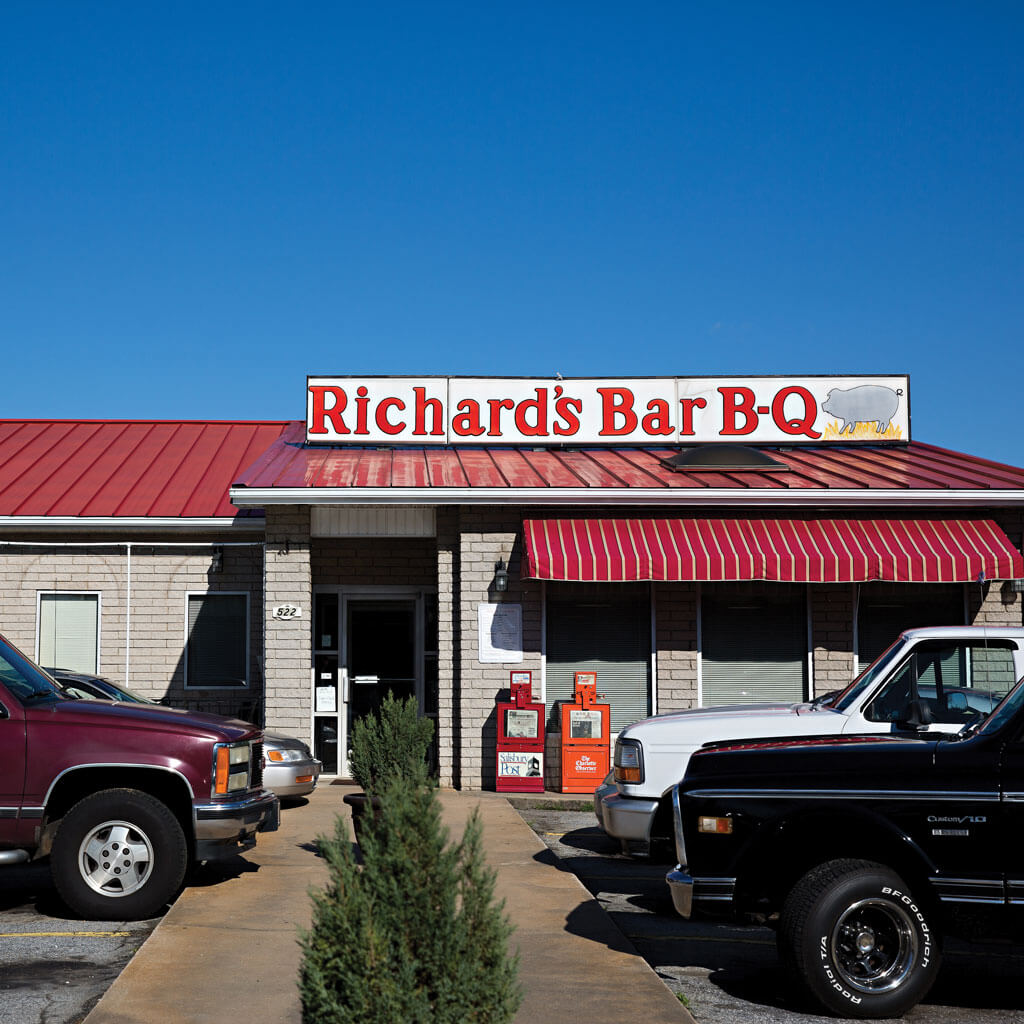 How do you spot a good barbecue restaurant? If you see an old-fashioned sign and a full parking lot, pull in. photograph by Peter Taylor

Richard’s opened in 1979 on Main Street, right between the courthouse and the railroad station, and that’s where it stands today. The eastern-style sauce has not been fiddled with in all that time, and slaw is the vegetable of choice.

Fuller’s is home to a huge all-you-can-eat buffet, which includes biscuits, barbecue, cornbread, and more. Need we say more? 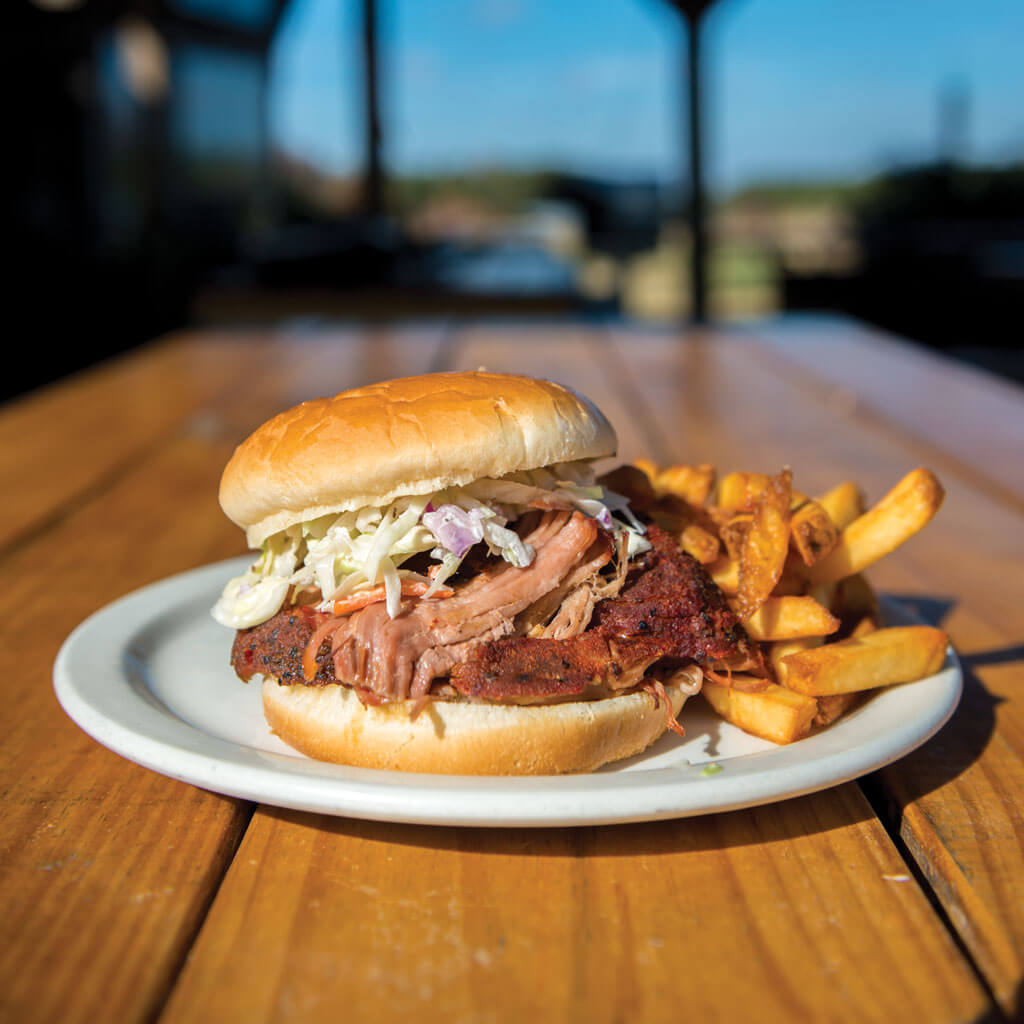 This fly-in barbecue restaurant is located at an airfield. But you don’t have to be a pilot to pay a visit. Here, an order of pulled pork comes with a view of the runway. 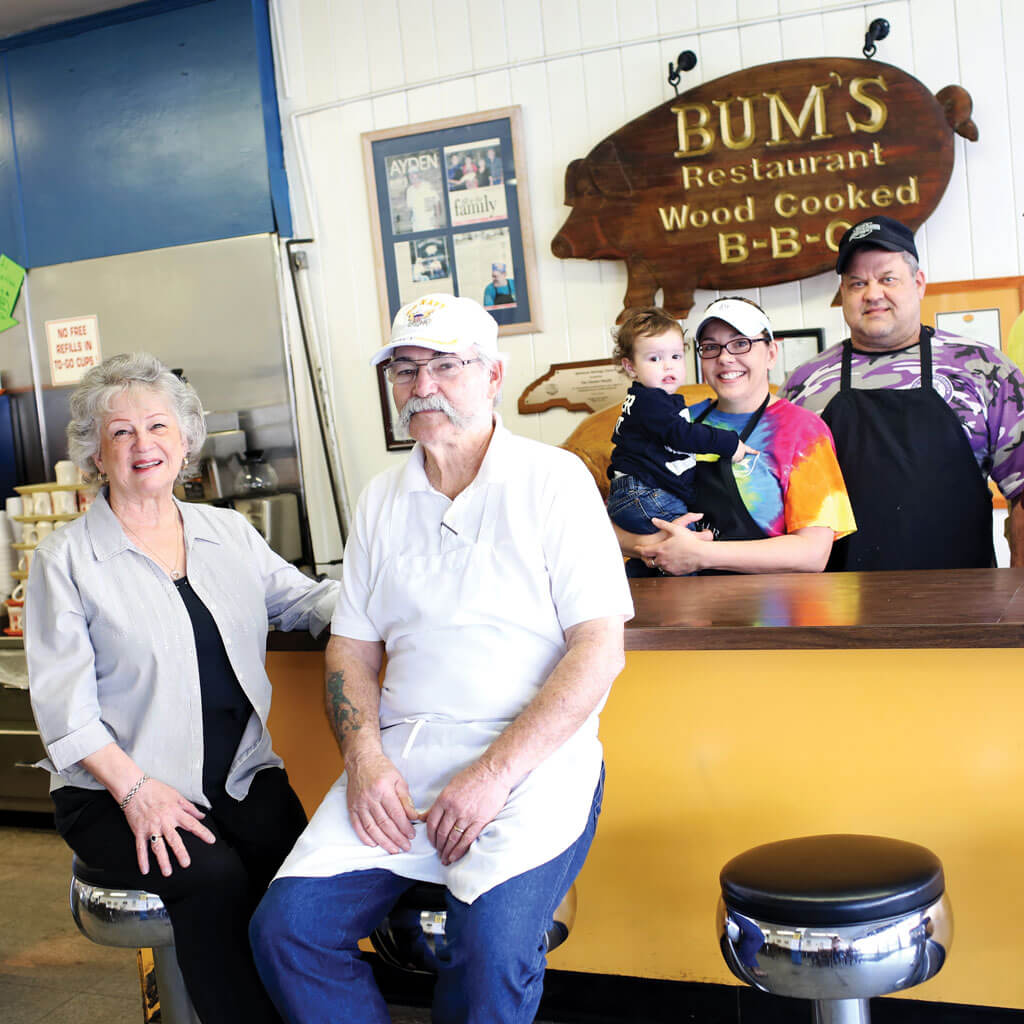 Bum’s Restaurant in Ayden is a family business, with several relatives floating in on any given day. photograph by Travis Dove

You won’t find a “best barbecue in the world” sign on the window, but after a bite of barbecue or a sniff of the woodsmoke wafting through downtown, you’ll see why Bum’s doesn’t need one. 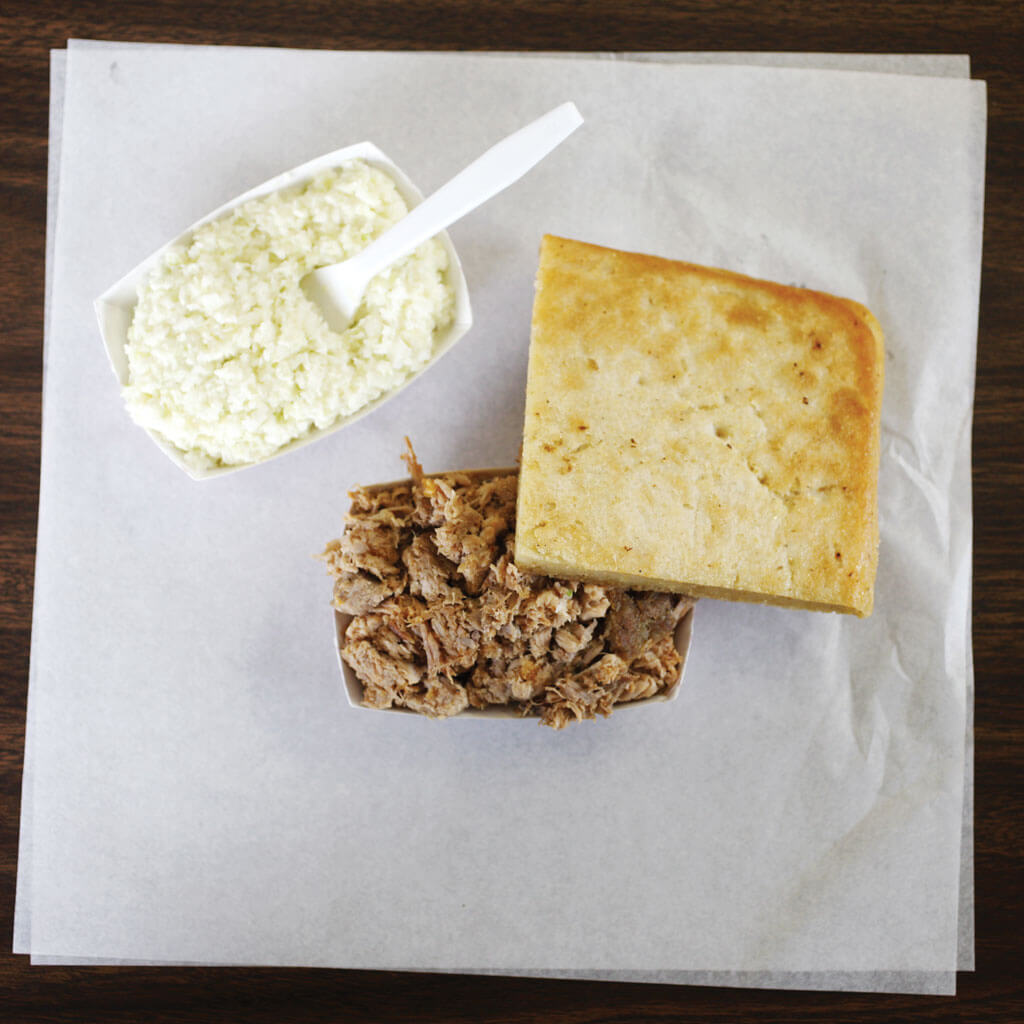 At Skylight Inn BBQ, you come for a barbecue sandwich on a bun, topped with yellow coleslaw. Or you come for a paper tray of chopped barbecue, a square slab of baked cornbread, and a little dish of slaw. photograph by Travis Dove

Skylight’s hickory-smoked, eastern-style barbecue is legendary in the eastern part of the state. The hog’s skin is blistered and mixed with the meat, and it’s served with a vinegar-based sauce, coleslaw, and a flat, heavy cornbread. 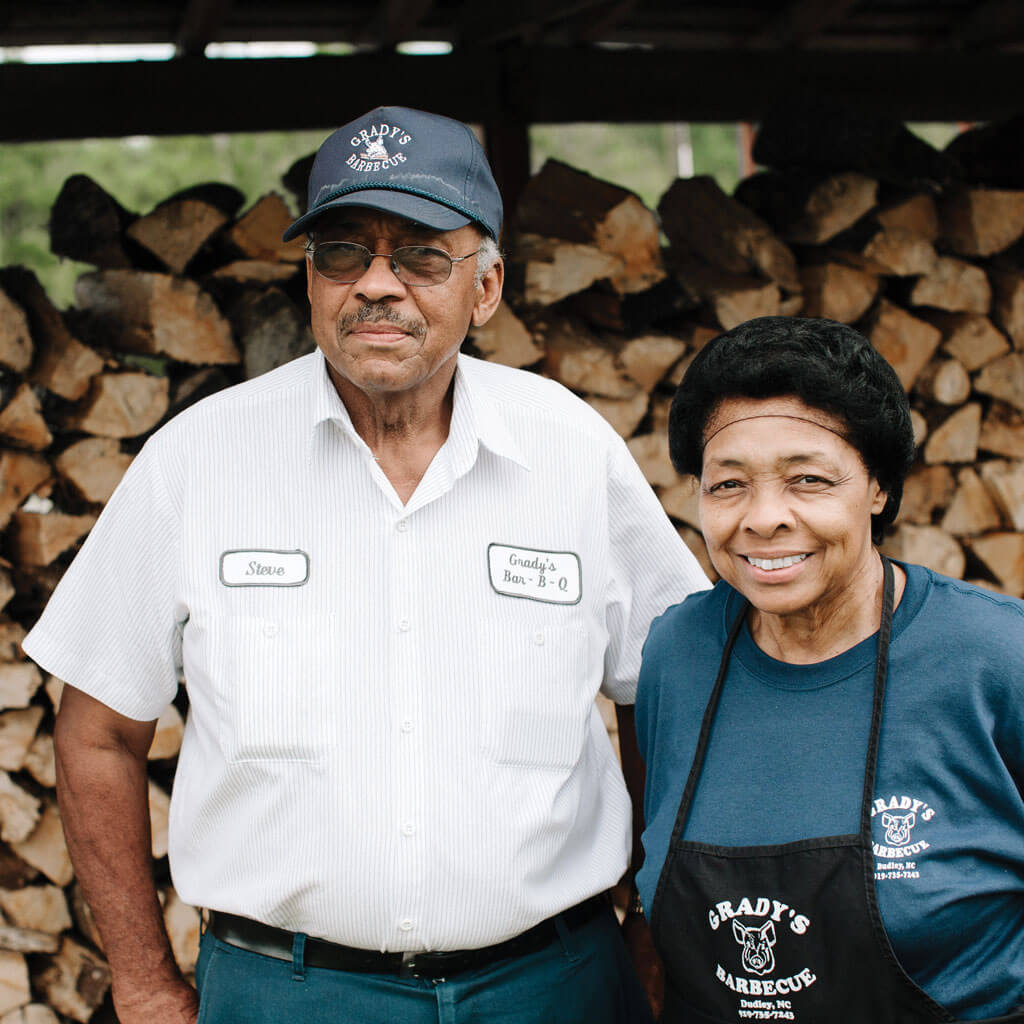 Steve and Gerri Grady don’t believe in doing anything the easy way, and the mouthwatering flavor of their slow-cooked barbecue confirms that. photograph by Geoff Wood

Sides of steamed cabbage, slaw, collards, and more are made from family recipes. The hush puppies are light and crispy. And the eastern-style barbecue is cooked over hickory and oak. 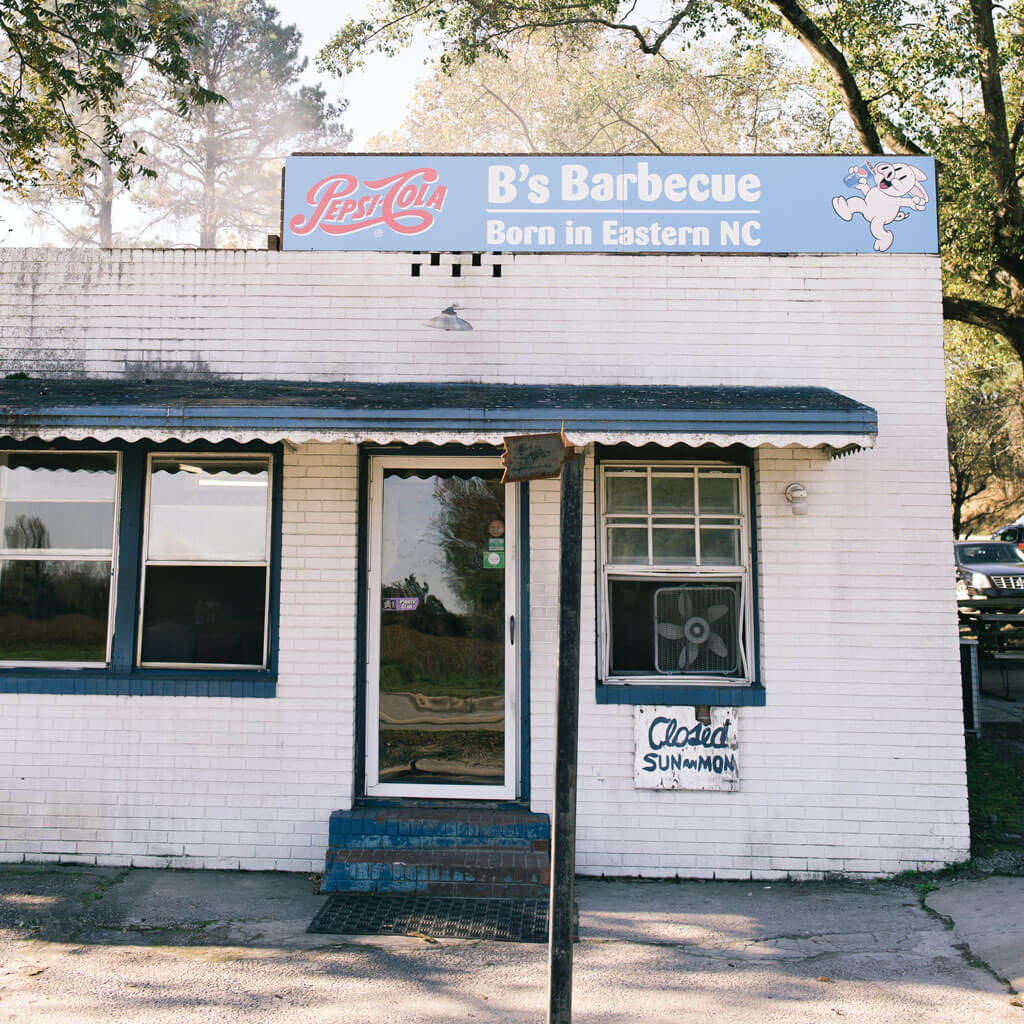 At B’s Barbecue, it’s what’s inside that counts. photograph by Johnny Autry

Simple, yet legendary. This Greenville landmark has no phone, no frills, and no equal.

Morris is only open on Saturdays — a tradition that began in 1956 — but the eastern-style barbecue is worth any inconvenience. Don’t overlook the hush puppies and layer cake. 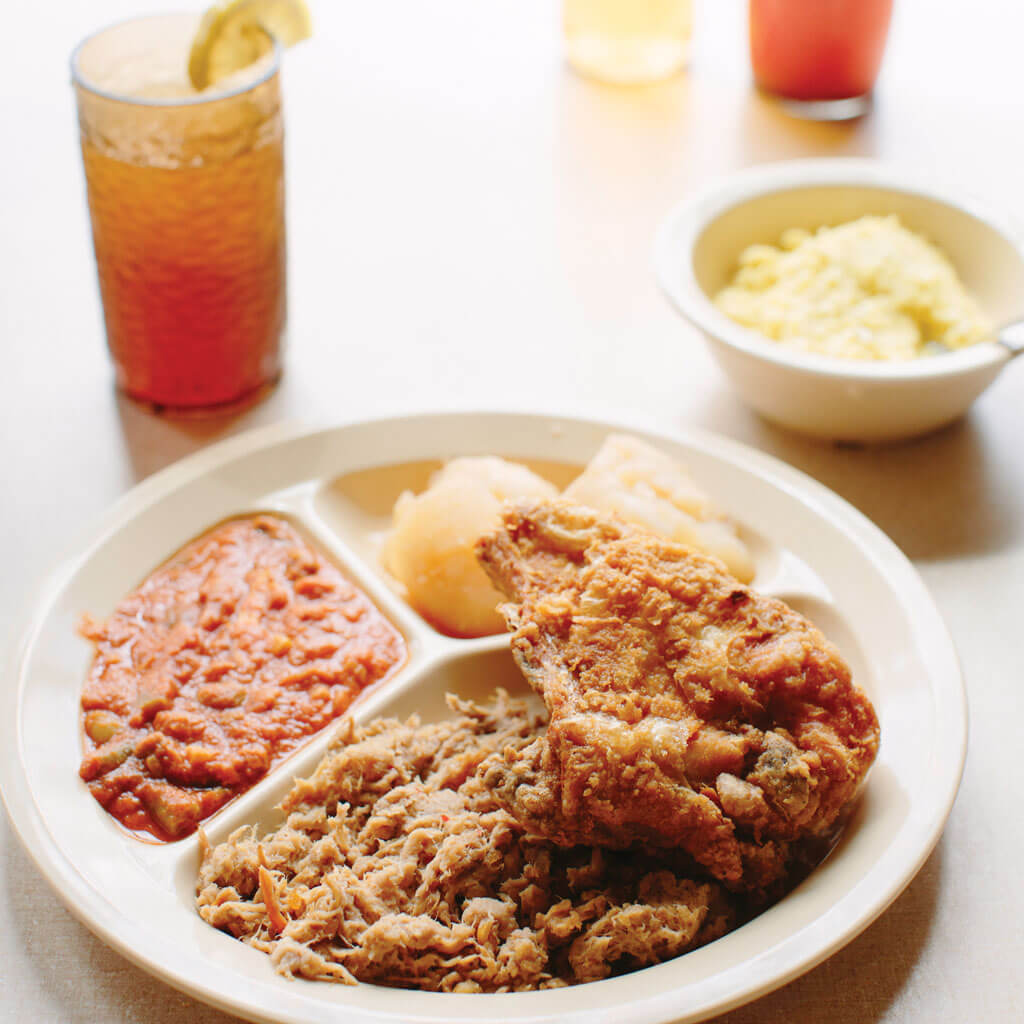 Each week, Parker’s smokes about 150 whole hogs — which are chopped and seasoned with a vinegar-and-red-pepper sauce — and fries about 8,000 chickens for 20,000 customers, who start coming early in the day.